Why I Don’t Fly–Constantinople and Covid 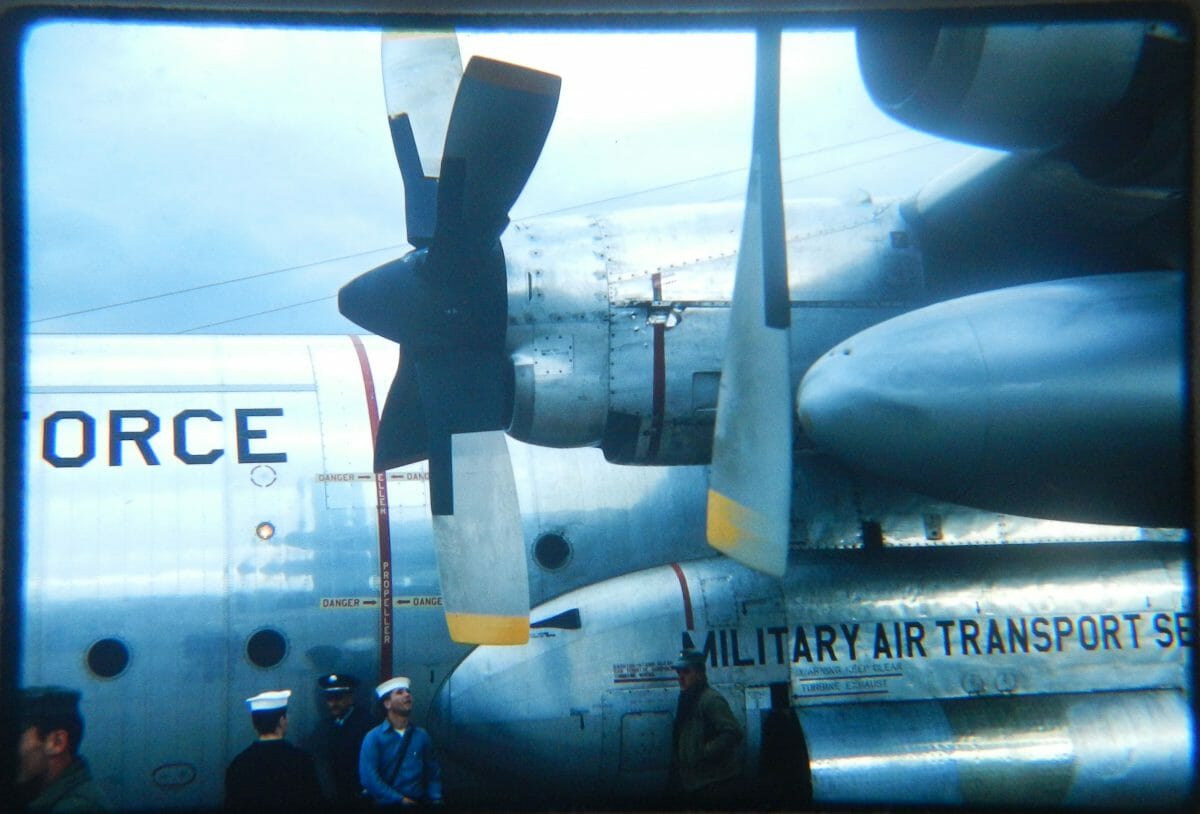 Flying back from Vietnam in 1965, our C-130 Hercules blew an inboard engine sending part of the compressor ring through the port light shown just aft of the propeller.  You can see holes on both sides of the engine cowling.  The top of the fuel pod was dented–glad it wasn’t penetrated.   It was 3:30 in the morning in the center of the Pacific Ocean.  I was sleeping right below this port light. 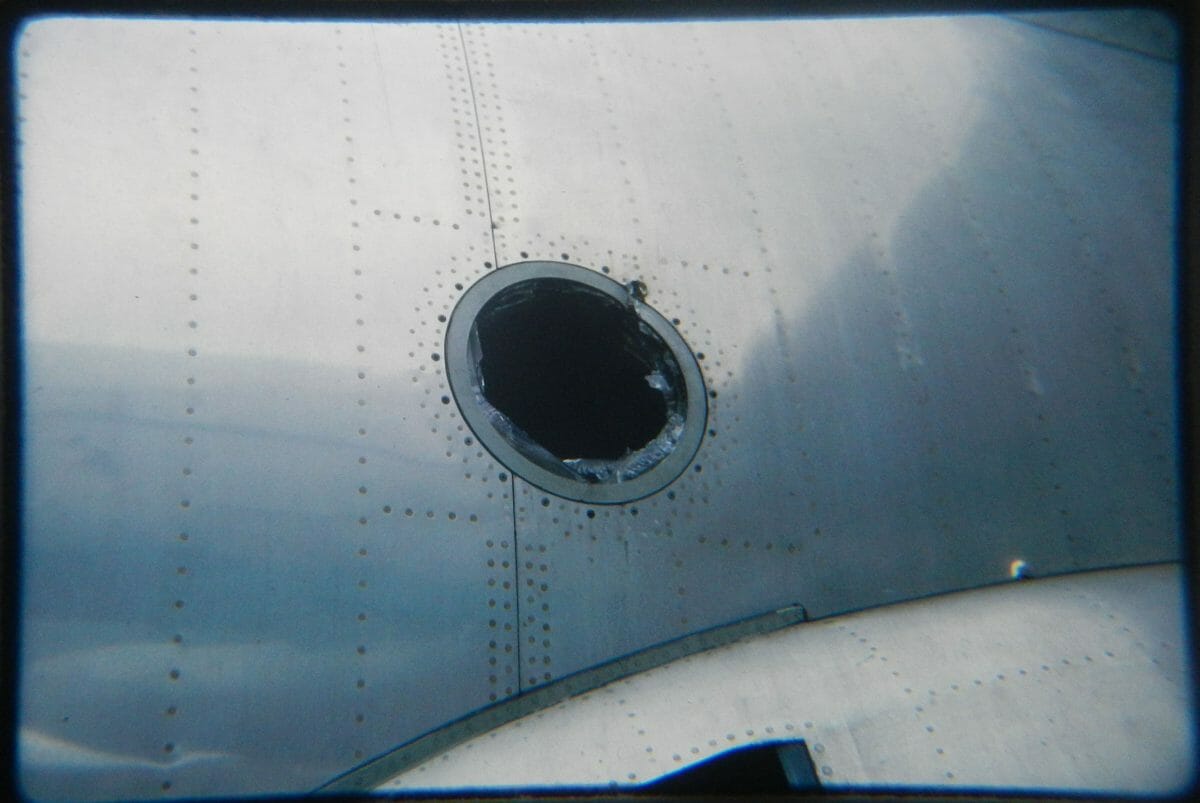 Here’s a close-up.  About five people were injured, the person lying directly behind this port light was blown out of his bunk and landed on me.  His leg was badly injured later requiring amputation.  I’ve never flown sober since. 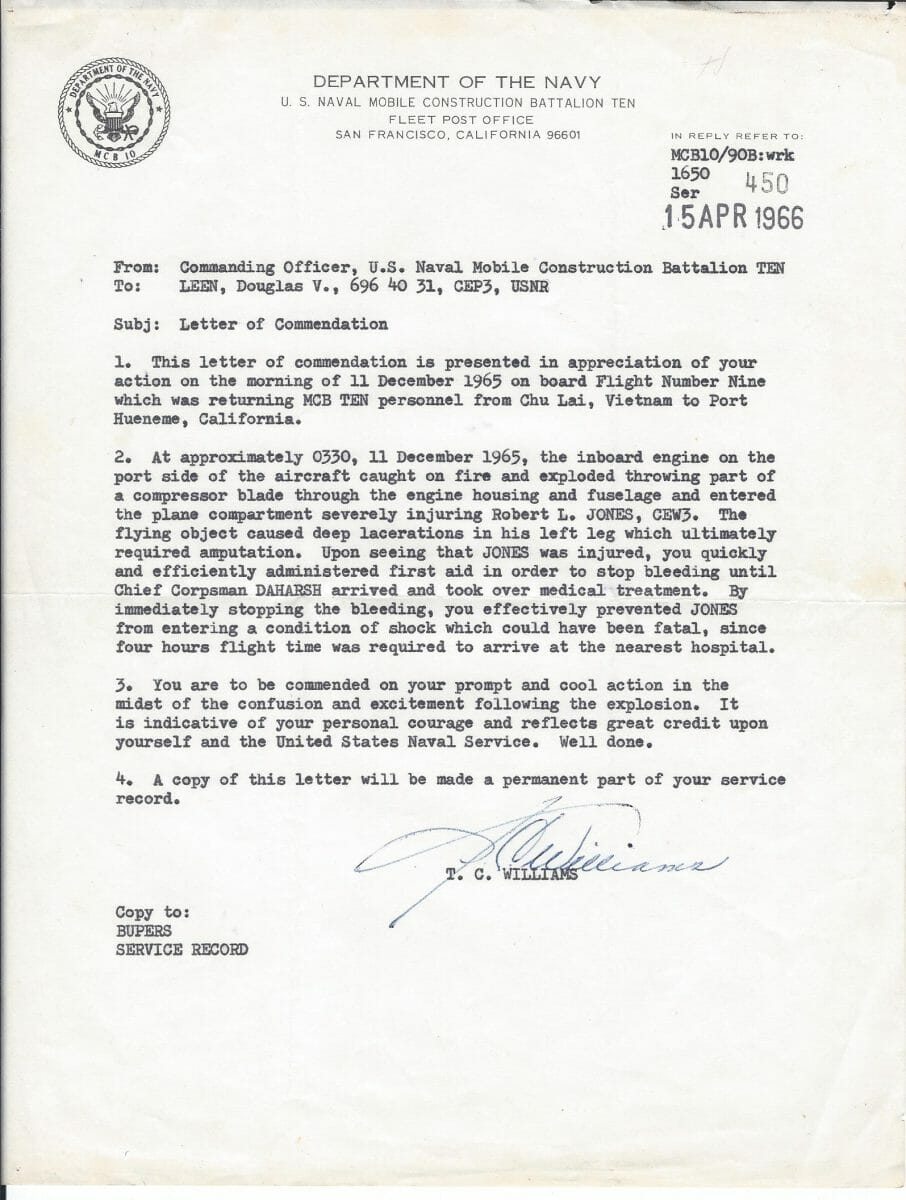 But I got a hero letter out of if and it likely helped my dental school application and opened a few other doors in life.  And I’ve never flown sober since, in fact for about 10 years now, I’ve not flown at all with two rare exceptions.  My appendicitis attack and getting out of central Turkey as described in the previous post. 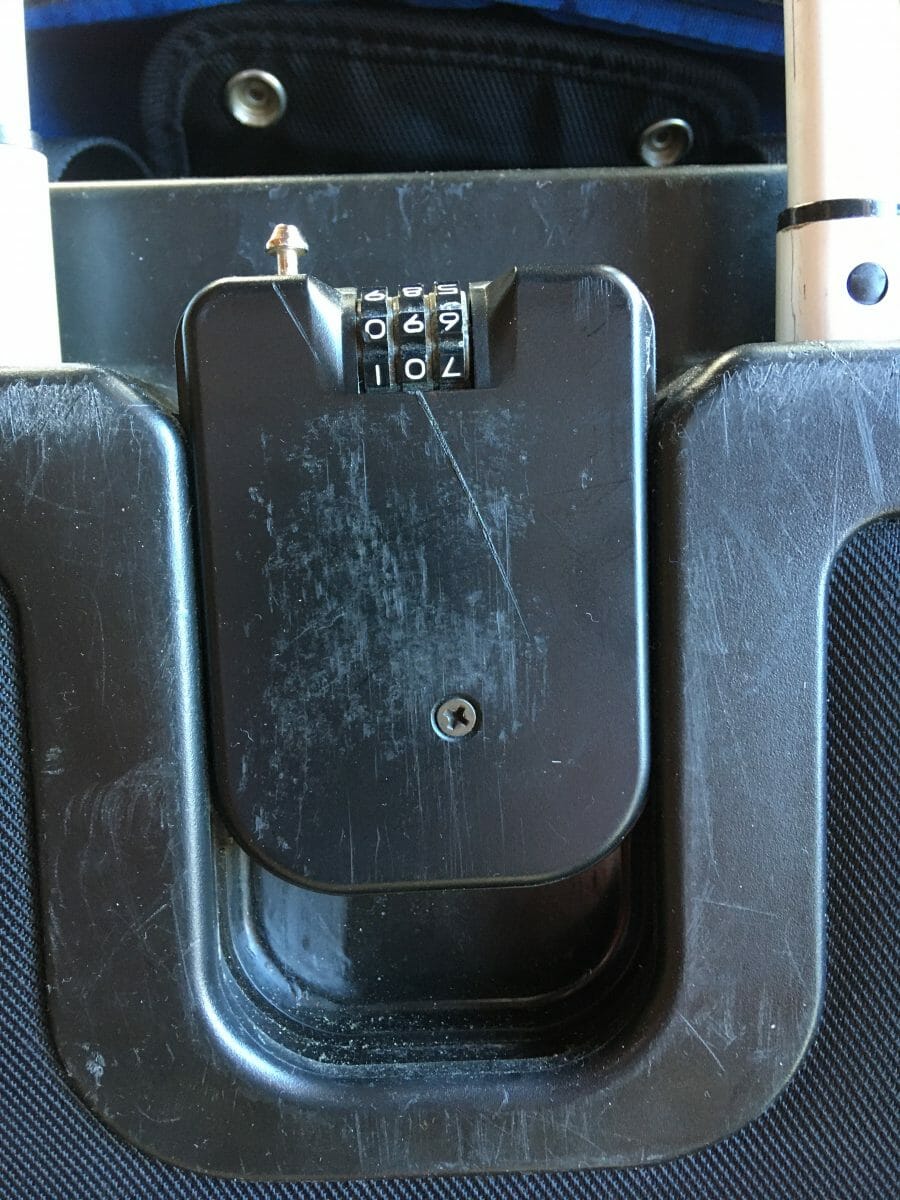 So, I brave the airlines one more time carrying my expensive $400 Euro suitcase that was with me returning from Turkey.  It has never flown and was in perfect condition until Delta Airlines got a hold of it. Or perhaps didn’t get a hold of it.  The lock here was dislodged and scraped. 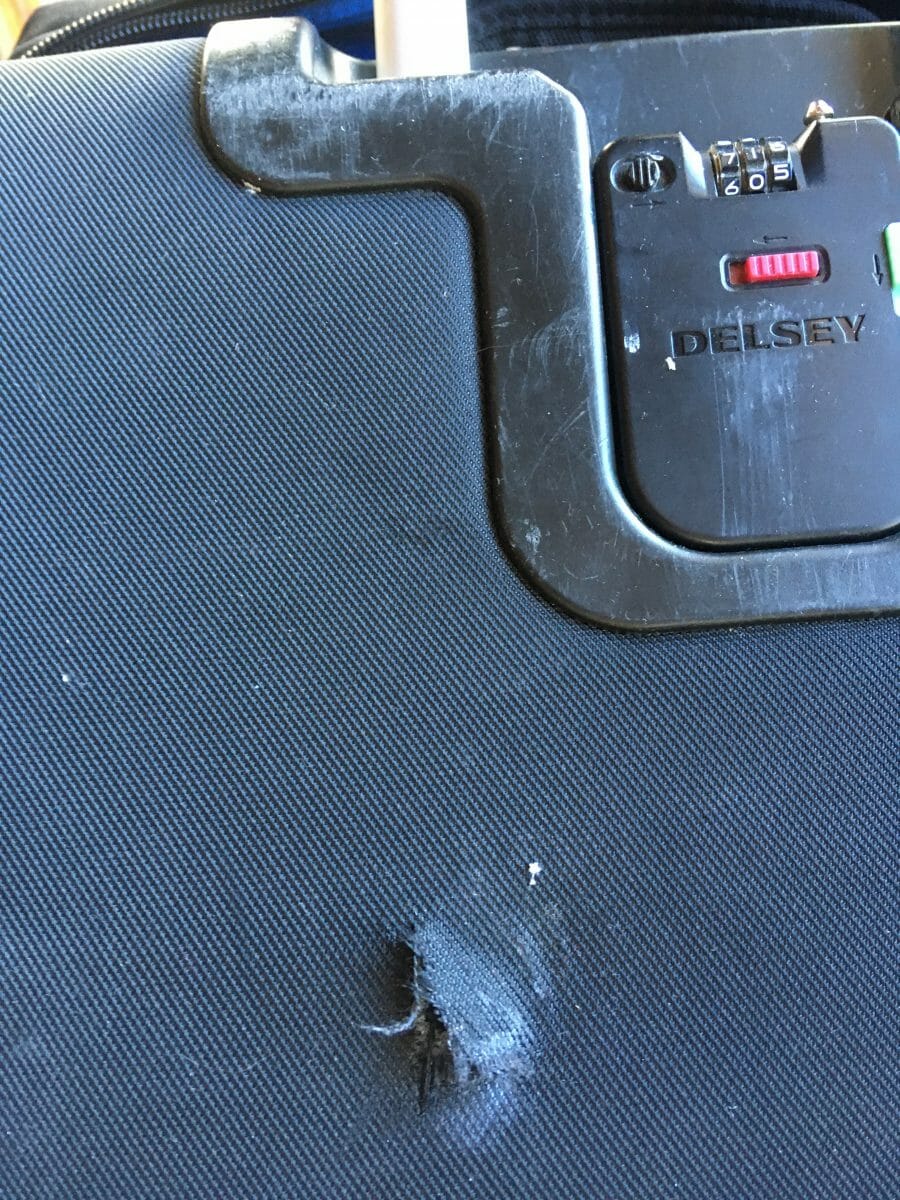 Bullet hole?  It’s punctured through the case taking out the telescoping handle with it. 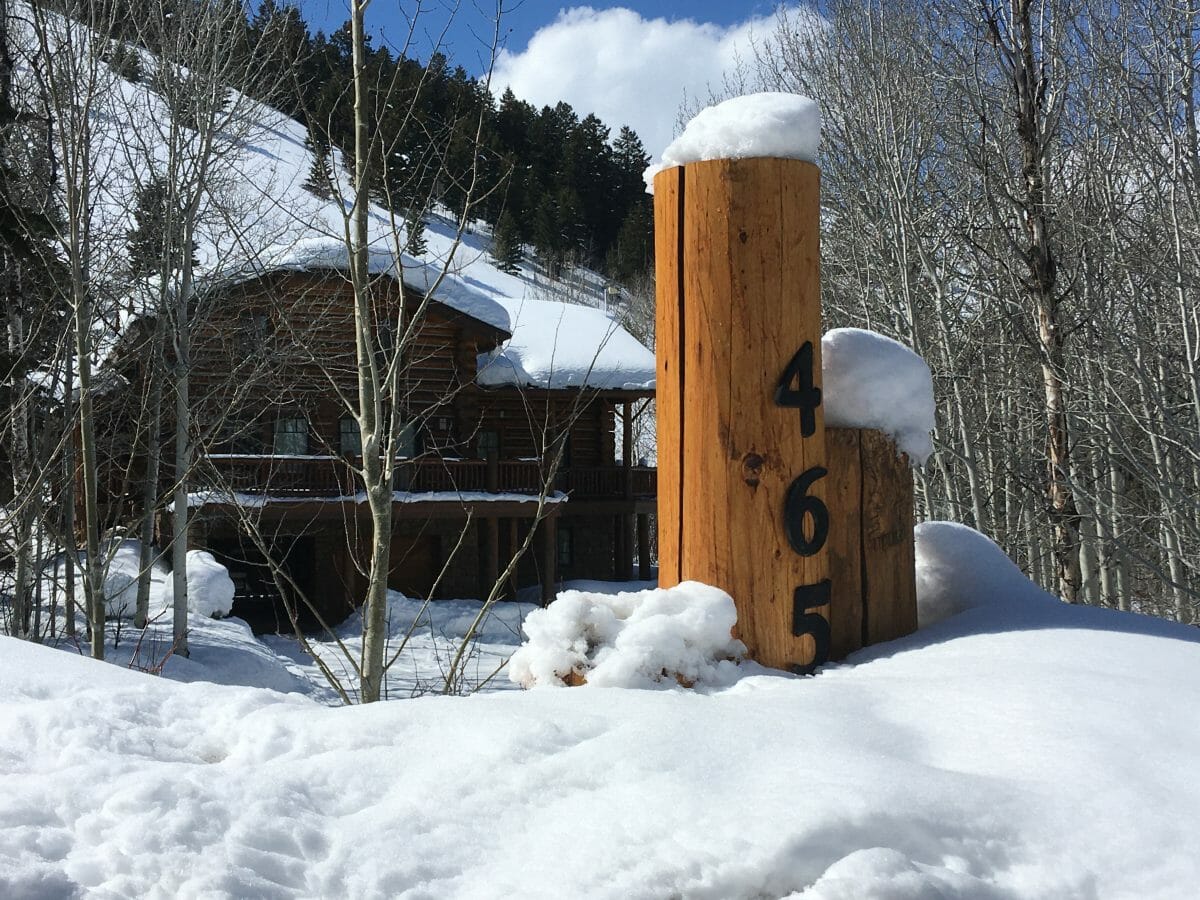 Blink, blink and I’m in Jackson Hole Wyoming.  I hunkered down here for two weeks before venturing into town to clear up any misunderstandings about this virus.  I was very sick in Cappadocia but rebounded well so guess I’m OK.  Of course, the ski area was closed three weeks prematurely so there was no skiing either. 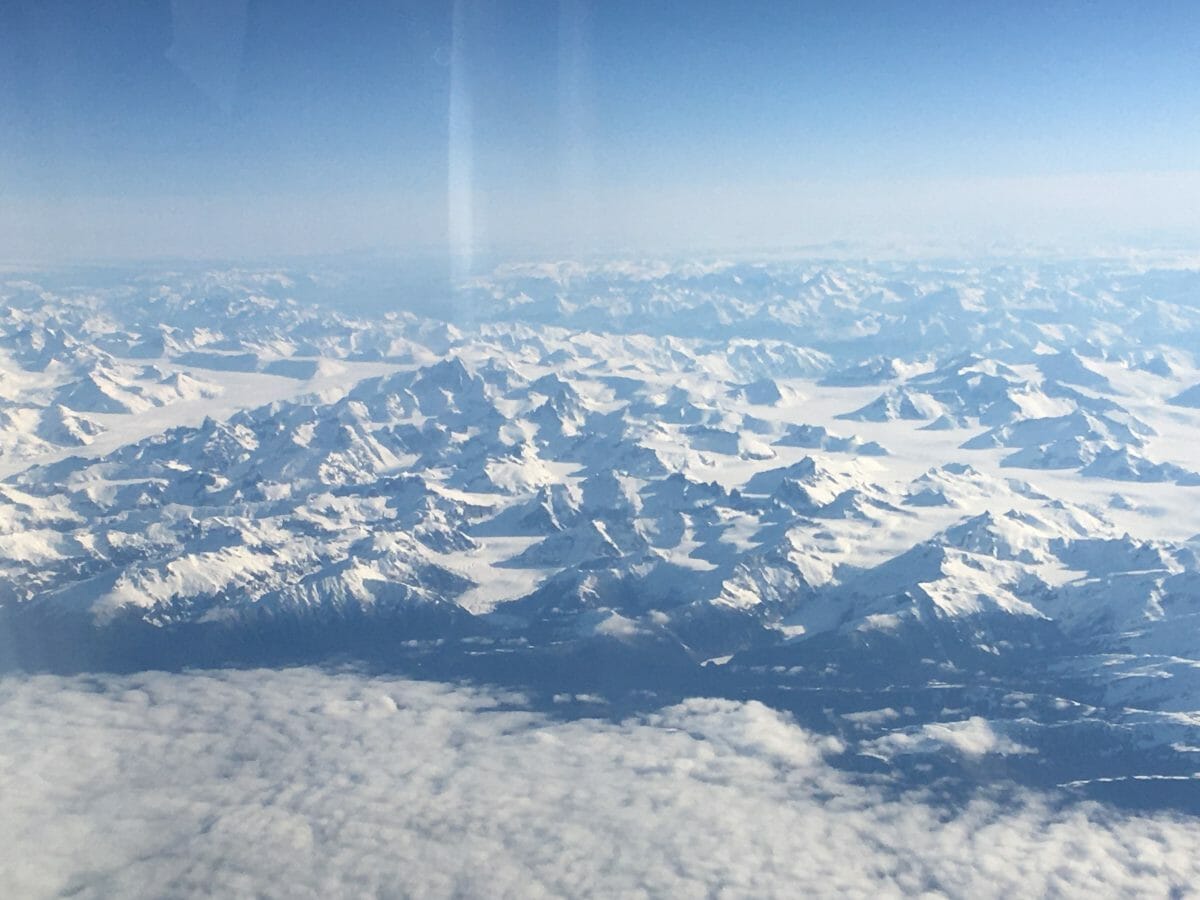 From Jackson, I drove to Seattle in one sitting–three tanks of gas–and then caught a flight to Juneau.  The back flight to Petersburg lasts only 30 minutes and flies directly by the BC Coast Range and Devil’s thumb about center here.  The darkest peak is actually Mt. Burkett, also a border peak and DT lies about 3 o’clock to it.  Petersburg is off to the right–you can just see the shoreline of Frederick Sound.  Coming in for a landing…… 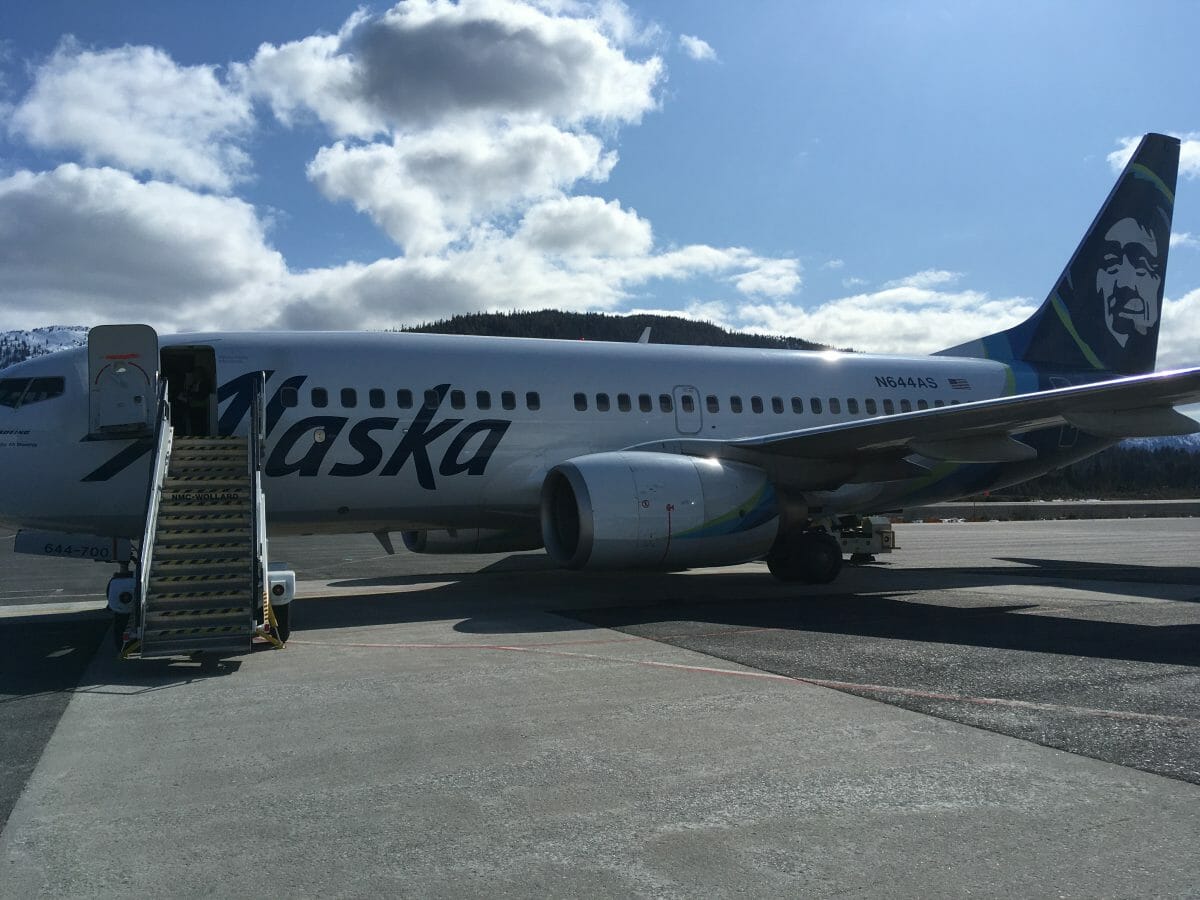 Good to be home.  I have to hand it to these pilots, especially Alaska Airlines.  They are still flying, even though my plane had about 10 people on it.  They put these monsters spot-on on the airstrips in fog and winter storms.  In this case, I made it from Turkey in four flights, not without hassles, but nevertheless made it home in one piece.  I hate flying. 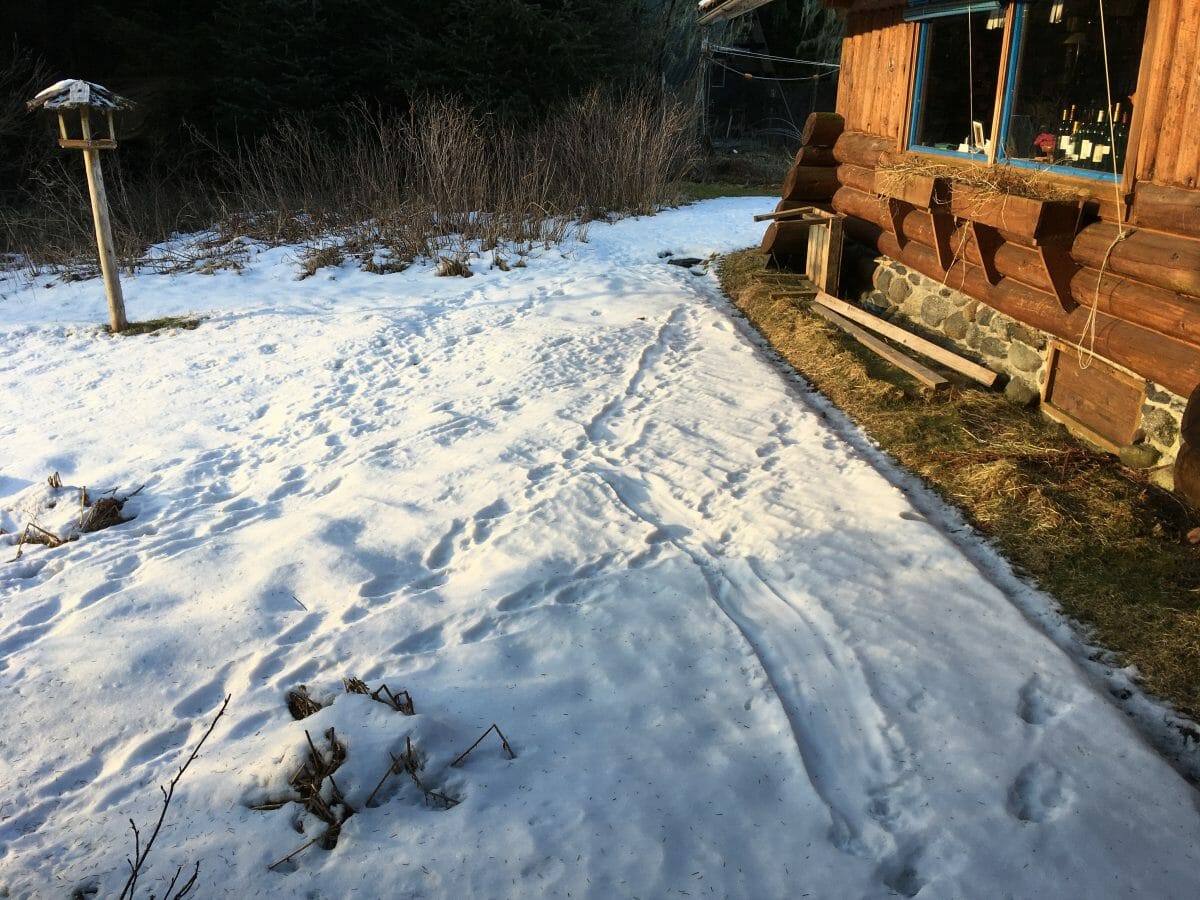 I was greeted by otters who were making an amusement park out of the cabin surrounds–sliding around the house for 360 degrees.  It’s one of the few creatures that simply enjoys a good ride.  Dall porpoises are another when they ride your bow wake in front of the boat. 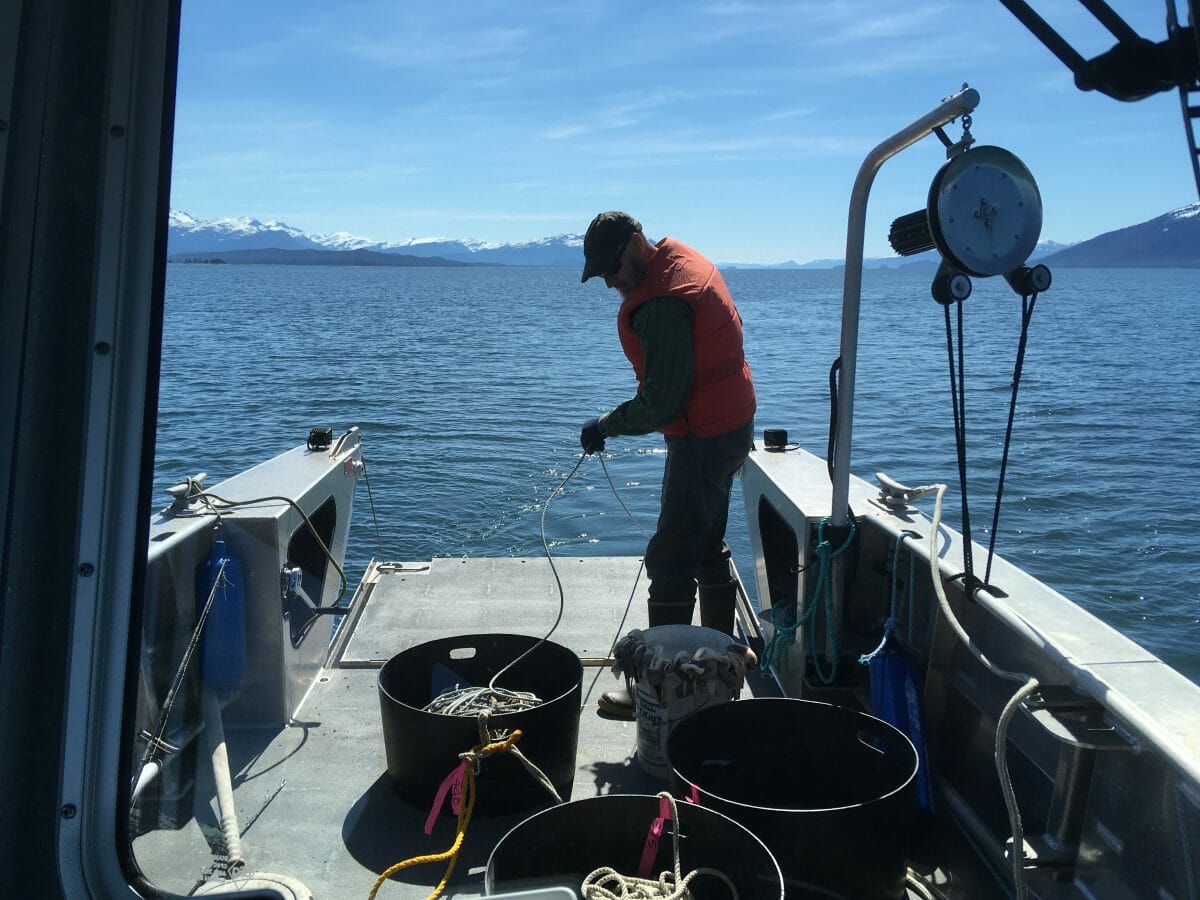 First things first…….get the fishing gear on the bottom.  In Alaska, those of us that live in small isolated communities can subsistence fish and here we’re putting a skate of 30 hooks on the bottom for halibut.  Caught two nice fish yesterday, the other a yellow eyed rock cod. 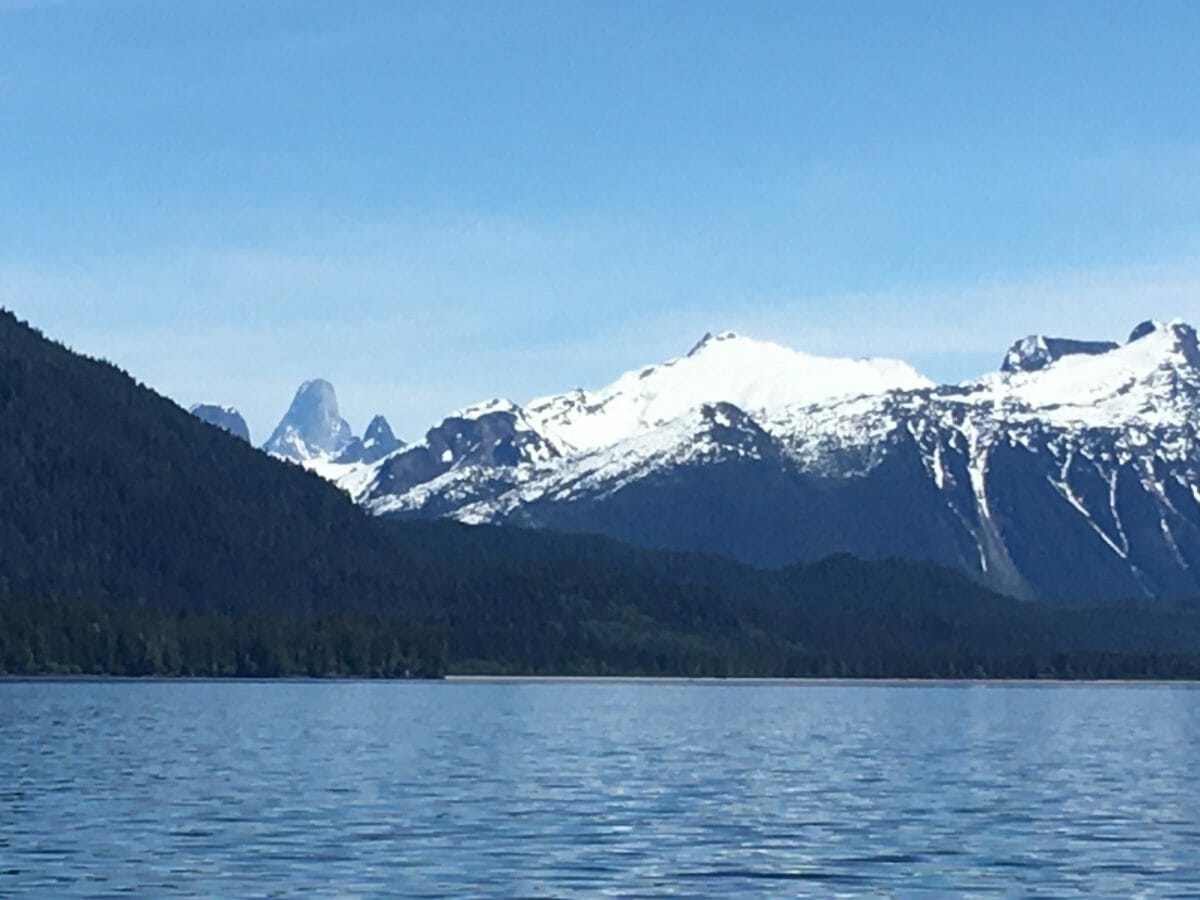 This is another perspective of Devils Thumb this time from Frederick Sound looking over a ridge that obscures Thomas Bay.  Garden’s in, plumbing is fixed, sourdough is started, caught my first crab and already baked two Strawberry-Rhubarb pies!  (Check out our poster magnets on the stove–only $4!). 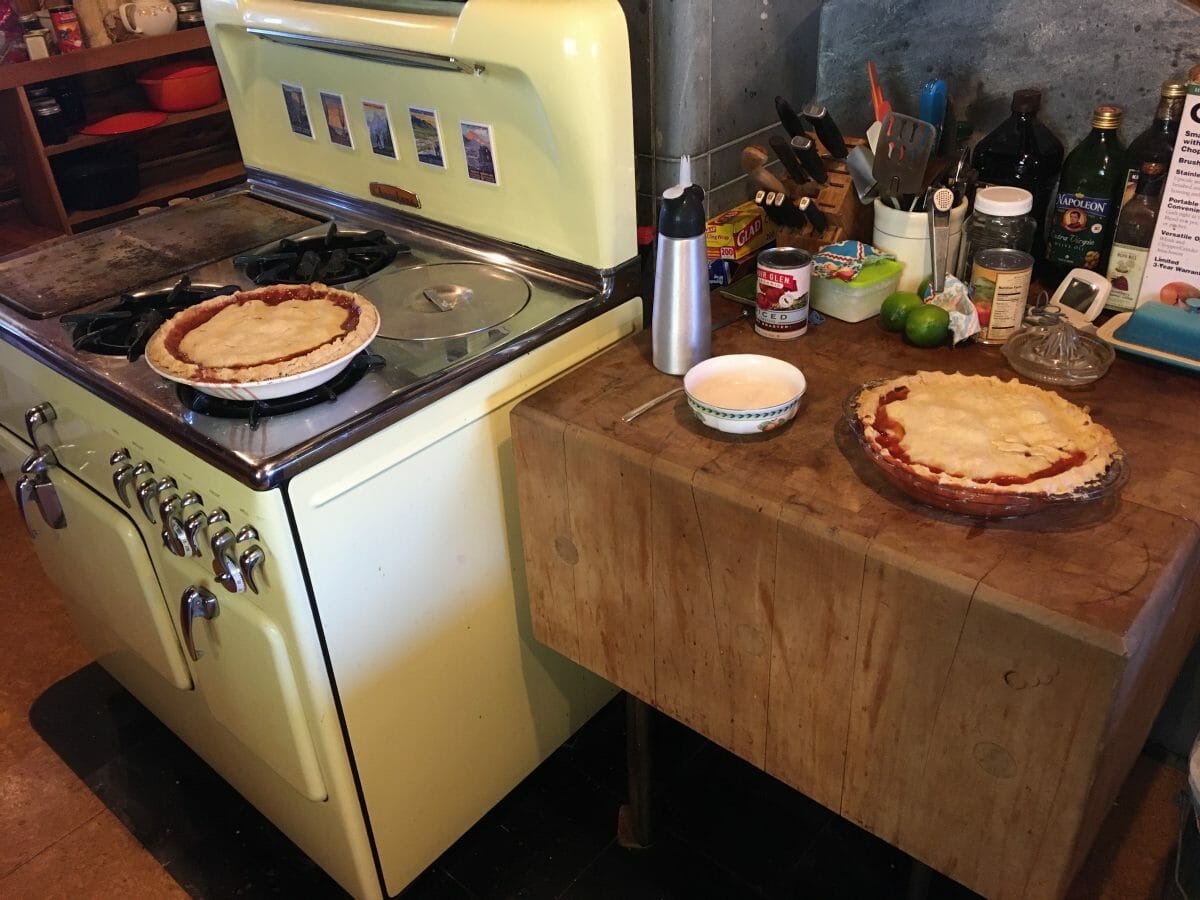