Istanbul–one of the great cities of the world–is an amazing place to say the least dating back to 660 BC.  It’s about 80 km in diameter and home to perhaps 20 million people, depending upon who’s counting.  It spans two continents is built upon dozens of hills, is cut by the Bosphorus which allows ships from the Mediterranean (via the Sea of Marmara) into the Black Sea; together with the Caspian Sea are half the size of the Mediterranean.  Every language in the world is spoken here, even in a little restaurant tucked below my apartment shown below on the right. 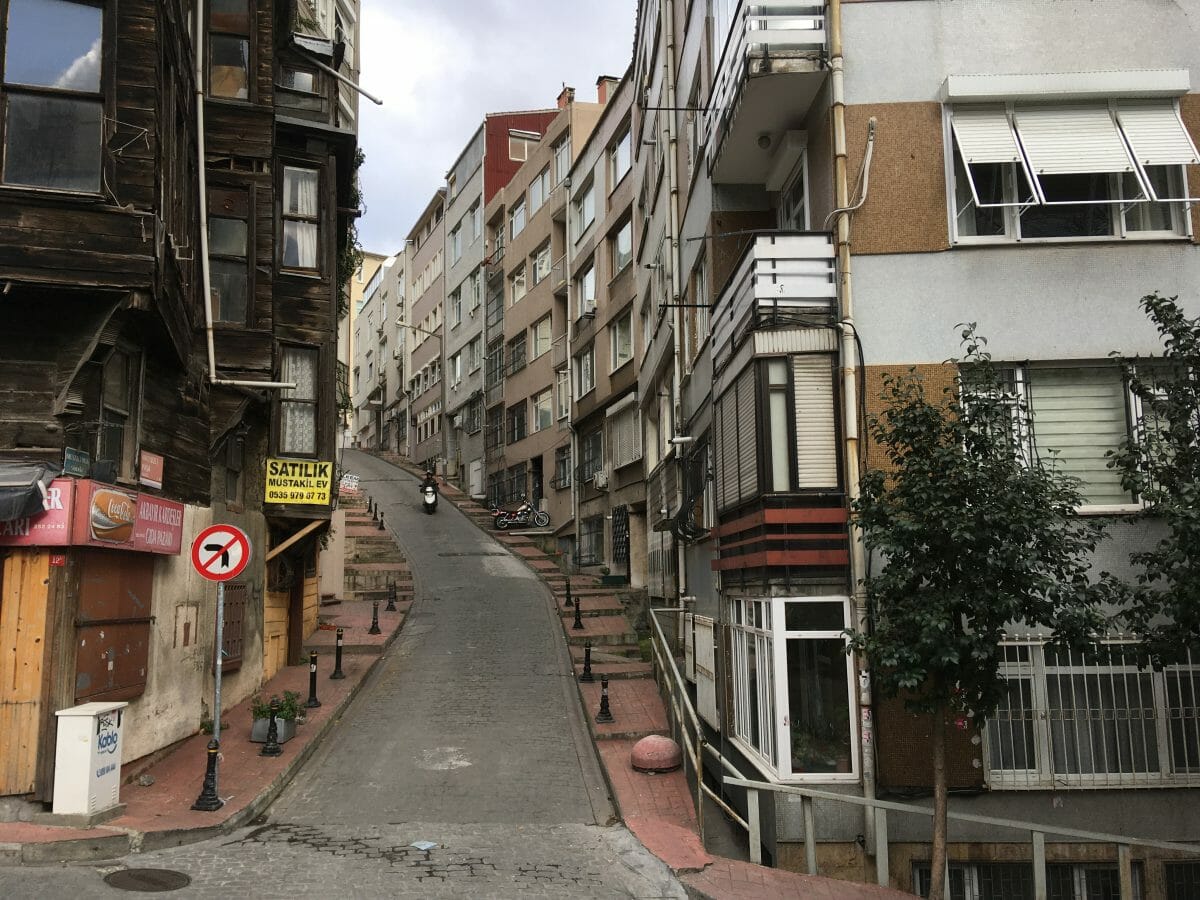 My knowledge of Russian has been very helpful–tonight’s dinner was ordered in that language from two young women from Baku who speak that, Turkish an Armenian.   My apartment will be my home for 30 days while I investigate the Turkish culture–and what a place to start.  This is my second trip to Turkey, the first was to Antalya 10 years ago which was at a Russian resort–more like a prison compared to here. 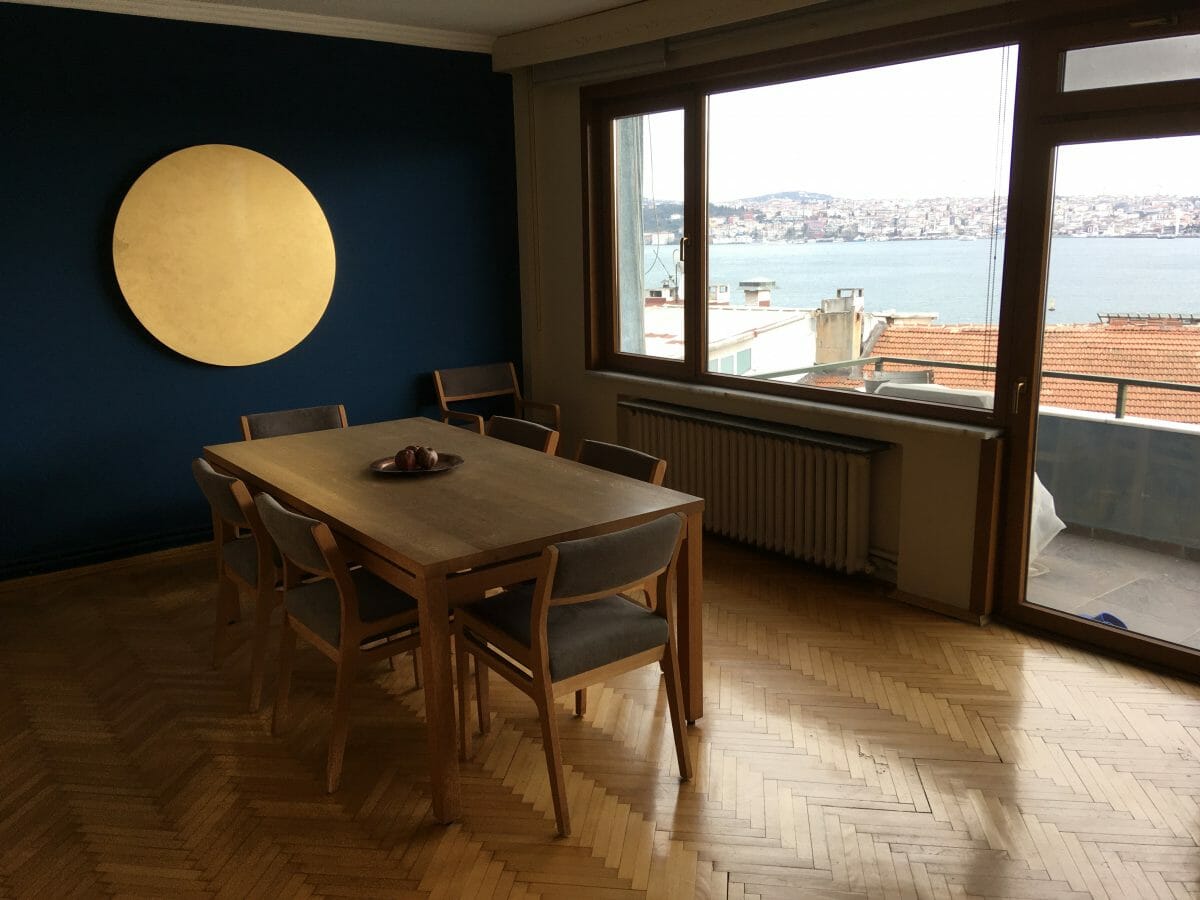 I’m lucky with this view out to the Bosphorus.  The shipping activity is nothing short of busy–with empty tankers inbound to the Black Sea floating high out of the water and outbound fully laden.  Ferries dot the shoreline 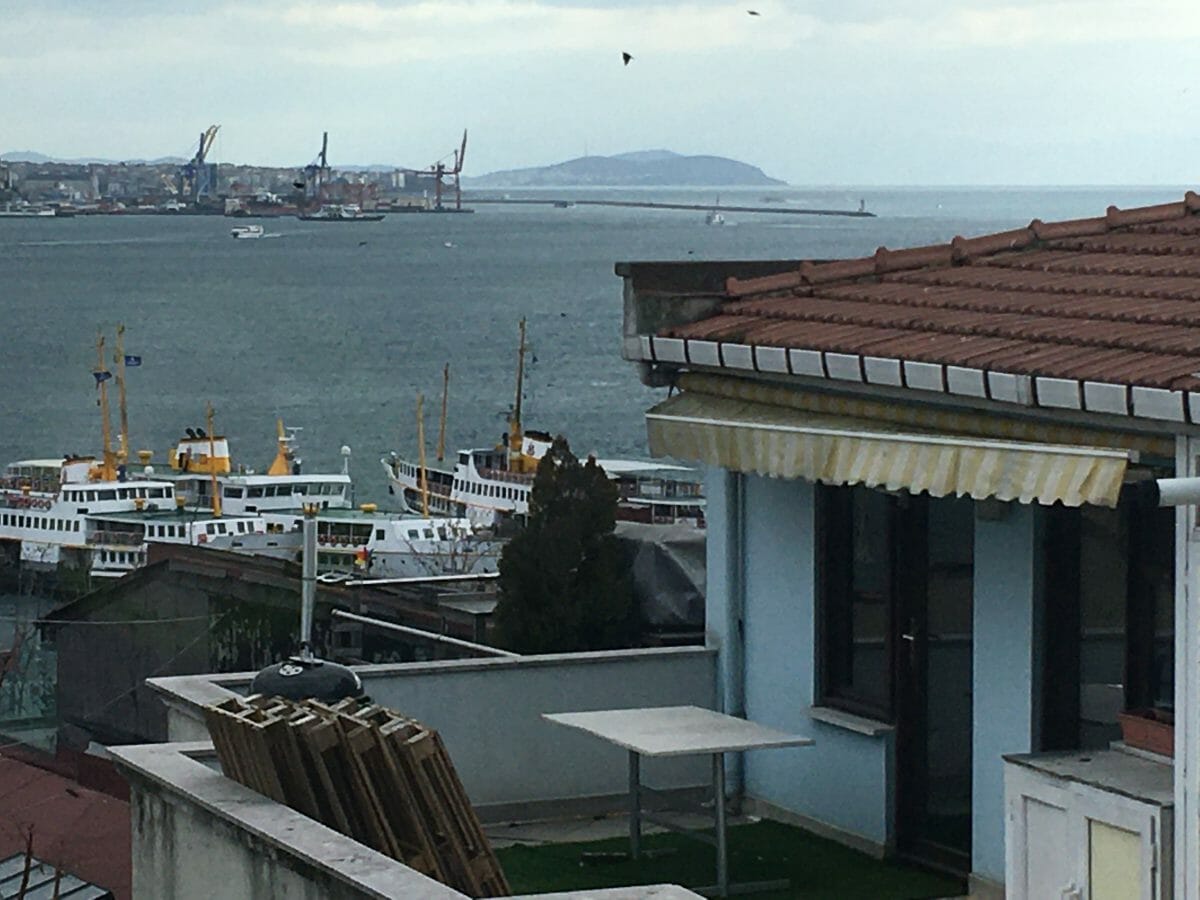 This view is looking SE (Asia on the left) with Kiniliada, Burgazadasi, Heybeliada, and Buyukada islands poking out from the shoreline in the Sea of Marmara.  That’s a mouthful–my keyboard struggles with the Turkish alphabet. 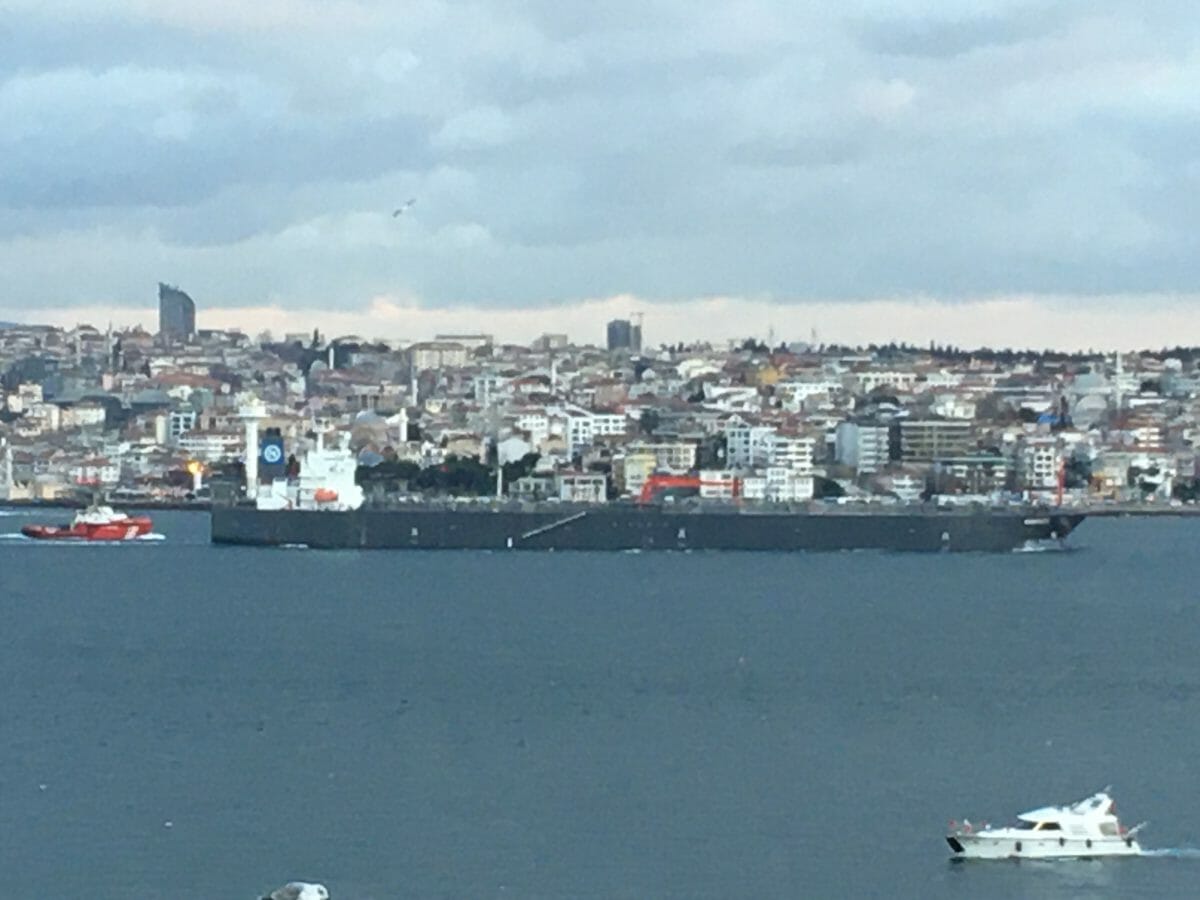 An outbound tanker fully bunkered down and escorted by the Coast Guard.  This is one of the busiest shipping channels in the world with tankers anchored miles away queuing up for their turn.  Like the Panama Canal. 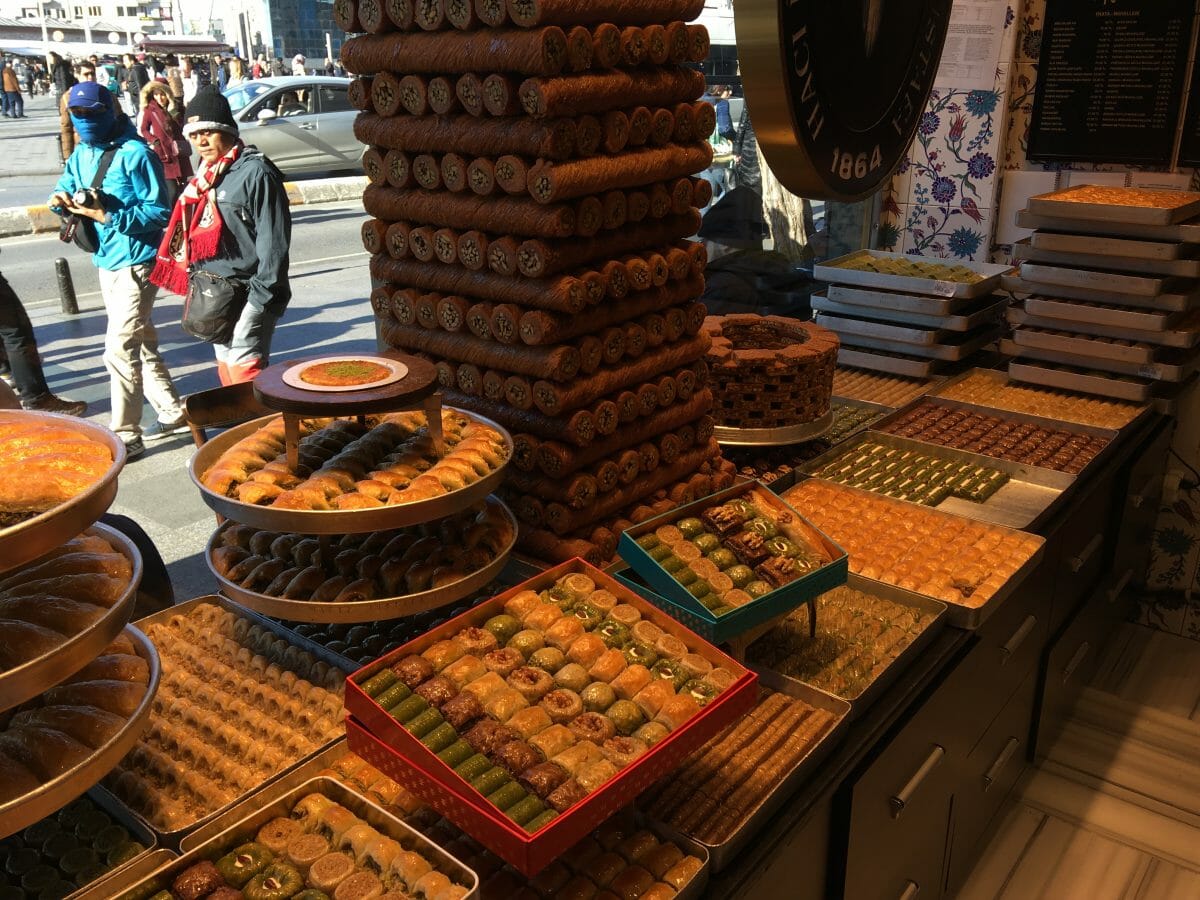 It doesn’t take me long to discover these Turkish delights–baklava and other sweets.  It seems like every store window is full of these, begging to be washed down with good strong Turkish coffee.  I have a Moki coffee maker and quickly make minor repairs and I’m off and running. 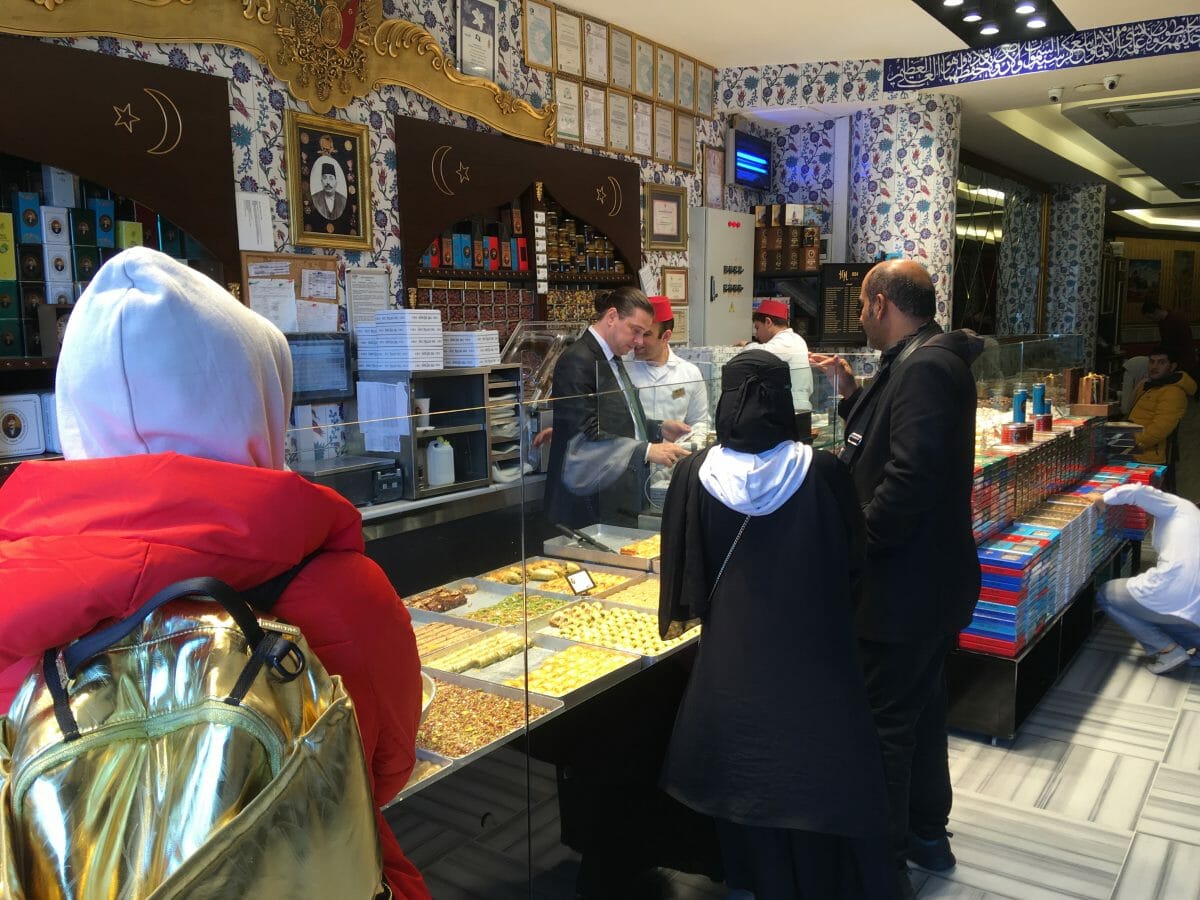 Pans and pans of these–how do you make up your mind?  You take a few of each and experiment each new day.  It’s a 12 minute walk to this cafe from my apartment to Taksim Square.  And all uphill with 54 steps to the street level, then 200 yards very steeply uphill where I encounter 119 cement steps which takes me to the German Consulate.  Turn left and another 1/4 mile to Taksim.  Good workout for a 73 year old so I feel somewhat justified in splurging on these.  It also applies to Turkish wines….but that will be covered in the next installment. 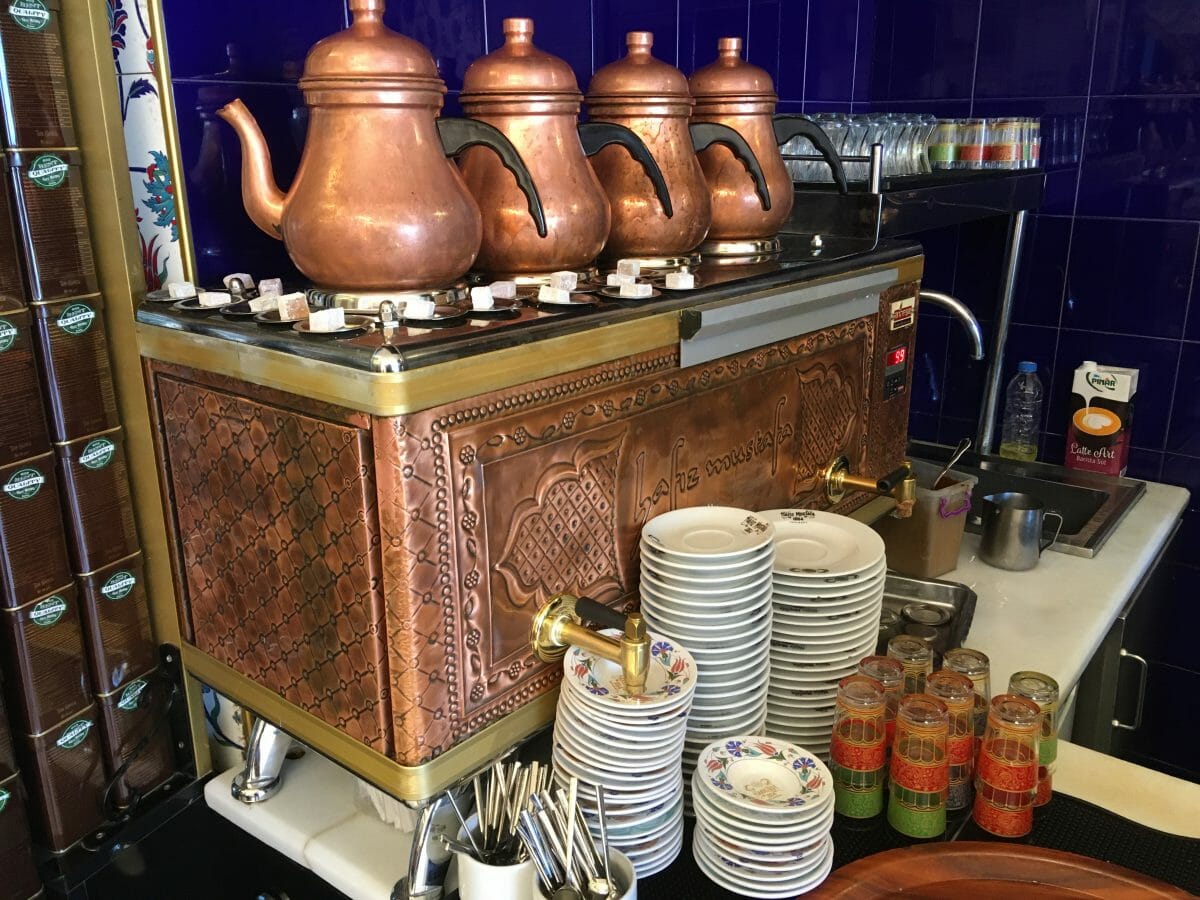 Not sure what this is, but it’s unlikely coffee…..likely tea or just hot water for tea.  Their coffee is the strongest you’ve ever seen and comes in thimble sized cups.  I add milk to mine to make it more palatable.  Starbucks could use a few pointers (they are right down the street). 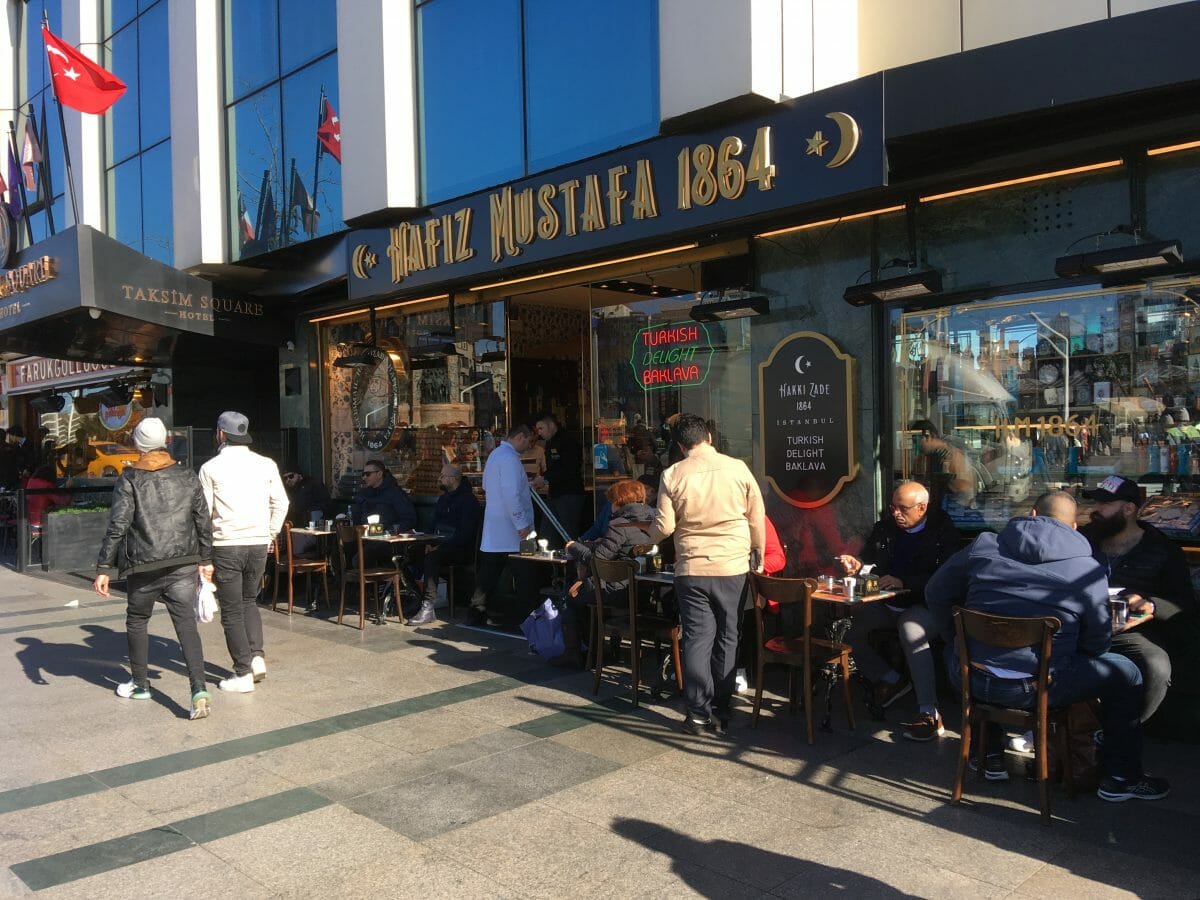 Here’s this one shop–out of hundreds–right on Taksim Square.  It’s right in the old part of Istanbul and if you ever see a gov’t demonstration or soccer match crowd–it’s usually here. 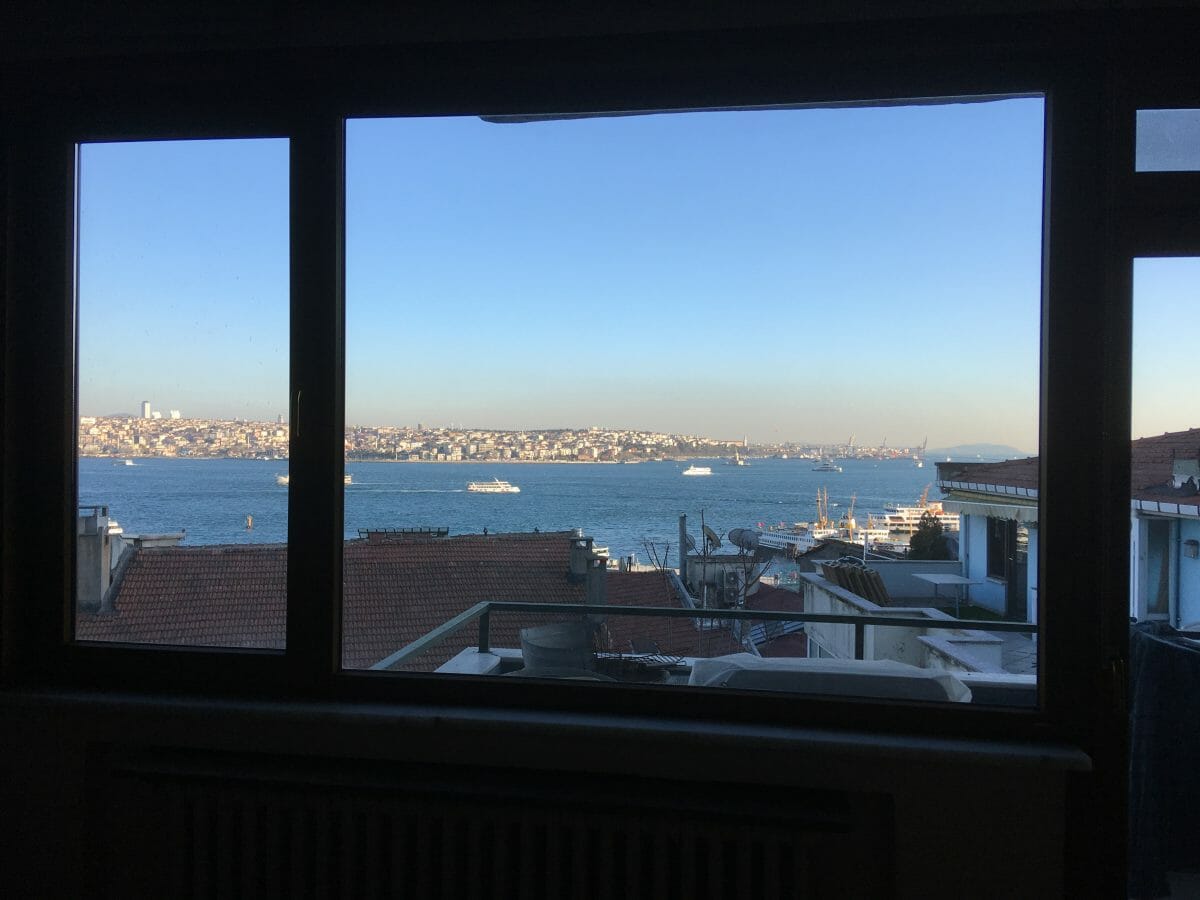 Another view from my dining room–winter temps here are about 40F and warmer;  quite comfortable to an Alaskan.  I’ll let you google the history but it’s notable that this city has had three names in its history:  Byzantium beginning in 660 BC, changing to Constantinople–named by Emperor Constantine I, after Rome took to Christianity–in about 330 AD.  It wasn’t until after the Turkish War of Independence in 1923 that it was replaced with Istanbul.It’s the 5th largest city in the world…….  Read the toponymy on the wiki page here;  it’s interesting. 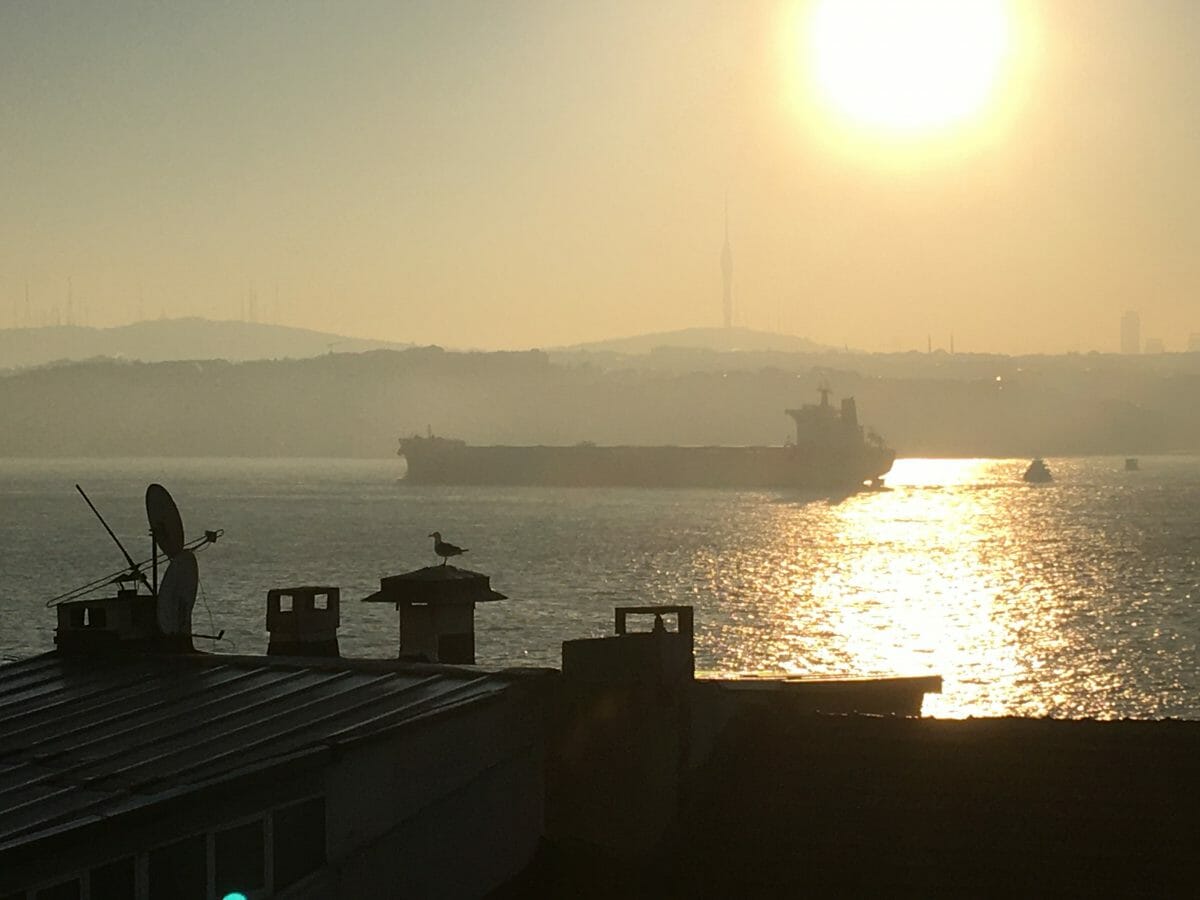 Morning sunrise with a huge tanker inbound and empty making its way up the Bosphorus.  The tower on the hill beyond is Kucuk Camlica Radio Tower which is 1210′–exactly twice as high as Seattle’s Space Needle.  At the west end of the Sea of Marmara are the Dardanelles which is the second constriction of this waterway.  Naturally, this has always been a strategic feature of the area and is the subject of David Fromkin’s excellent history:  “A Peace to End all Peace–the End of the Ottoman Empire and the Creation of the Modern Middle East.” 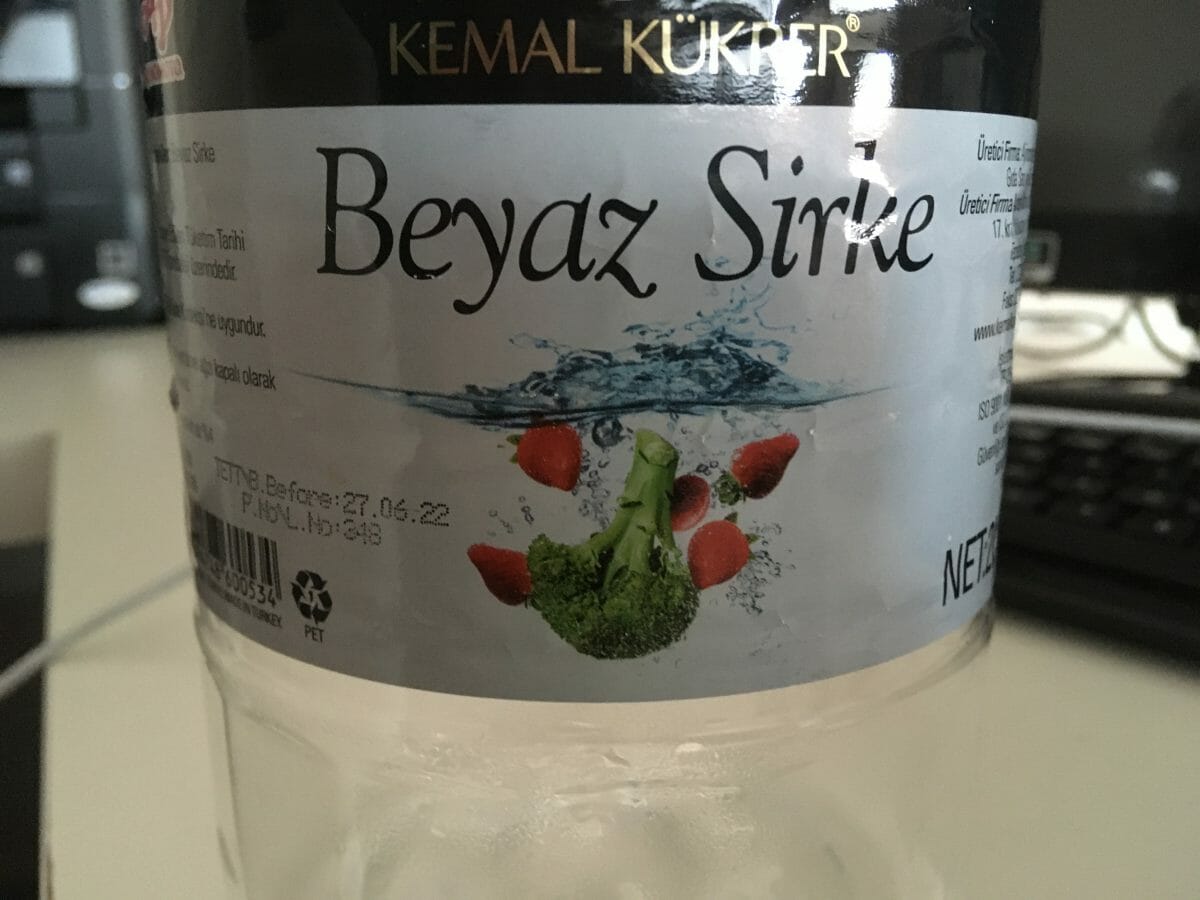 I learned two words so far–Beyaz Sirke.  Nope, this isn’t water, nor wine.  It’s vinegar.  Looking at the splashing vegetables here, I assumed this was pure water (it was left in my apartment) and made my ice cubes with it to chill down my 5pm ritual Gin & Tonic.  The first sip, had a slight off-taste which progressively got worse and I attributed it to the limes being astringent.  Nope.  Removed the limes on the second night and as the ice melted, the gin went south–so to speak.  Still not fully understanding the chemistry, I thought perhaps the tonic water here is a bit different (I prefer Fevertree Elderflower)–nope–not to blame.  Then the gin itself (I don’t like martinis).  At last, it could only be the ice.  Ruined half a bottle of gin in all this!   Stay tuned for week #2–the Koc Museum and elsewhere!