The Church of Santa Maria del Fiori otherwise known as The Dome–the first octagonal domed structure built without an exterior wooden frame dominates the Florence skyline.  I took a course in Architecture in 1967 right after returning from Vietnam–I had aspirations to be an architect–and this dome was the subject of a 1 hour intro course in Architecture;  I got an “A.”  Instead, I became a geologist first, then a dentist with a year stop-over in pre-med where I studied mainly biology & genetics.  An architect, I was not meant to be.   However, this building has sat in my memory for more than 50 years and now I get to explore it. 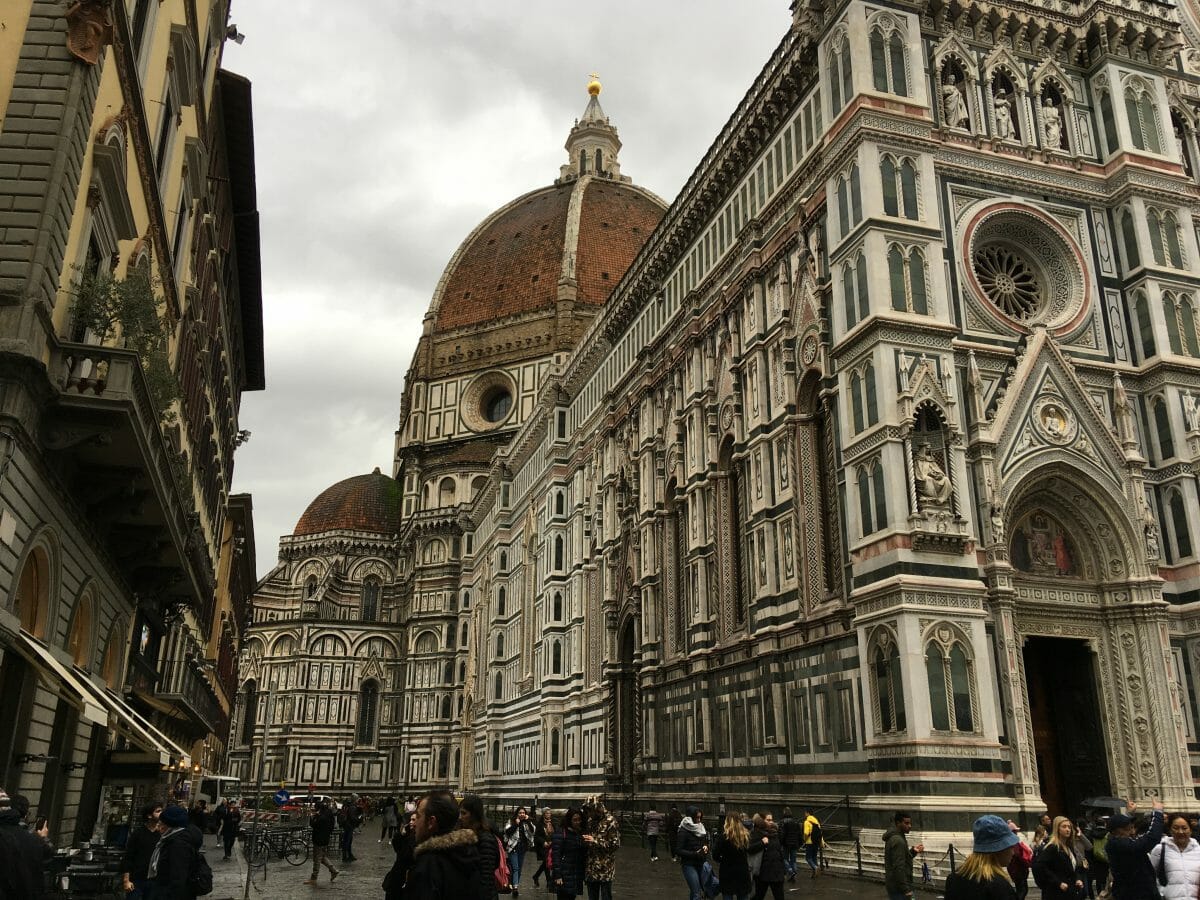 Seems like all these Italian churches have three parts; like the one in Pisa.  A big center in the shape of the cross, a bell tower and a smaller churchette.  OK, my atheism is showing here–can you imagine the amount of time and moneythat was spent on the churches of Europe?  And all the torture stuff along the way–plunging Europe into 1000 years of dark ages.  Architecturally it is an interesting building and I fork out $18E to enter it and look up at the dome.  Then I climb all 563 steps to the belfry of the dome.  The passageway to this lofty perch tells me that the they didn’t serve up so much pasta on those early days.  We’re talking about 2′ wide stairs with people walking both ways.   The main part of the church was built in 1296 and this dome was added between 1420 and 1436. 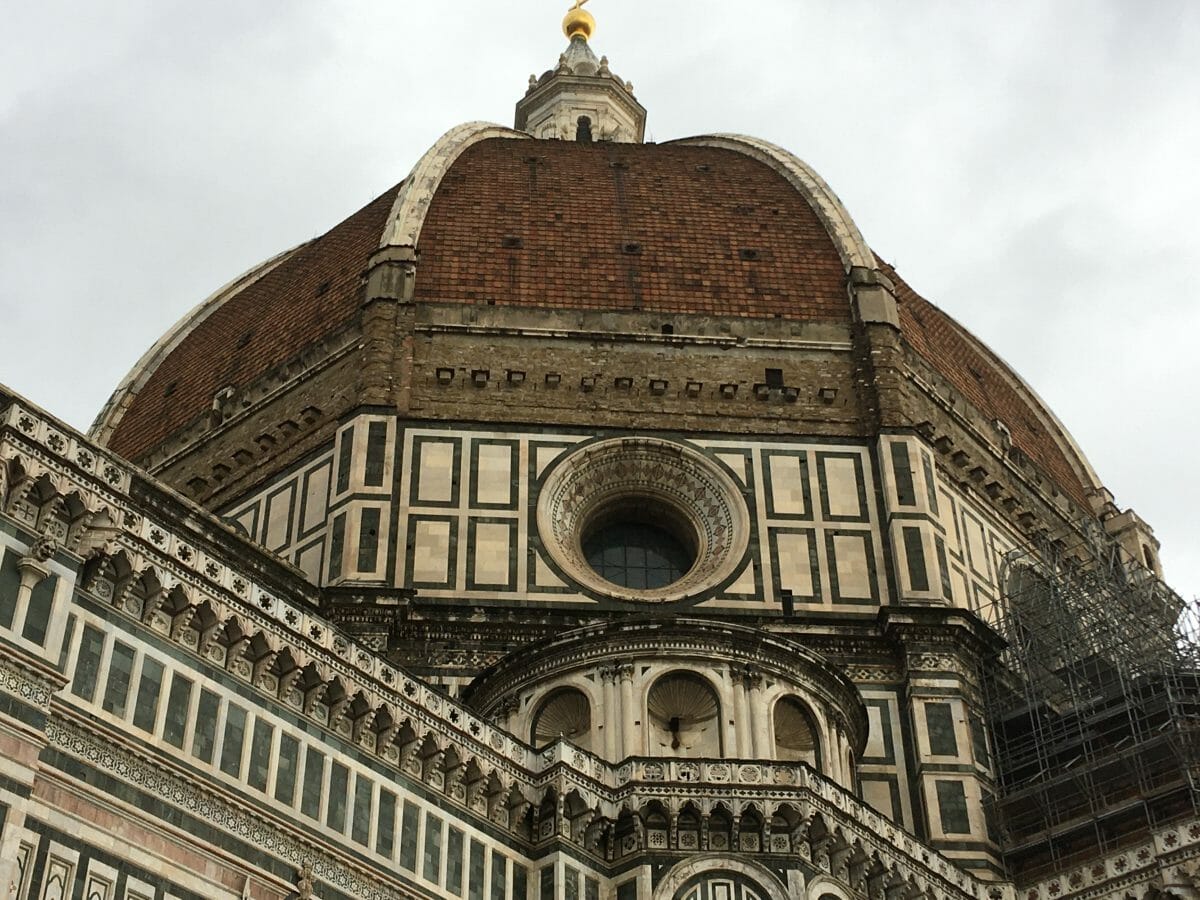 Here’s a closeup of the dome….. 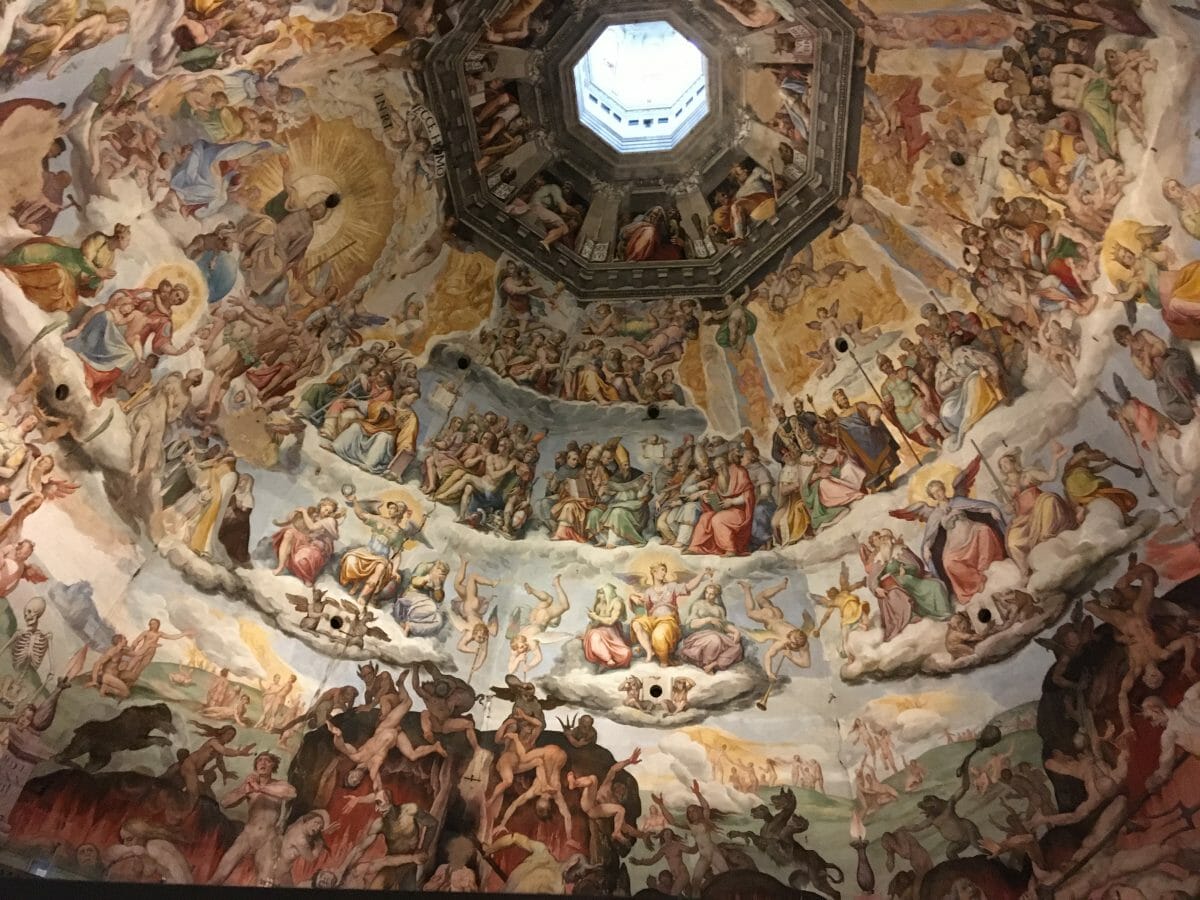 ….and the inside.  This looks like heaven and hell to me–lots of anguish looking down on the parishioners.  If you don’t pony up to the offering plate, you might end up on the bottom end of this mural. 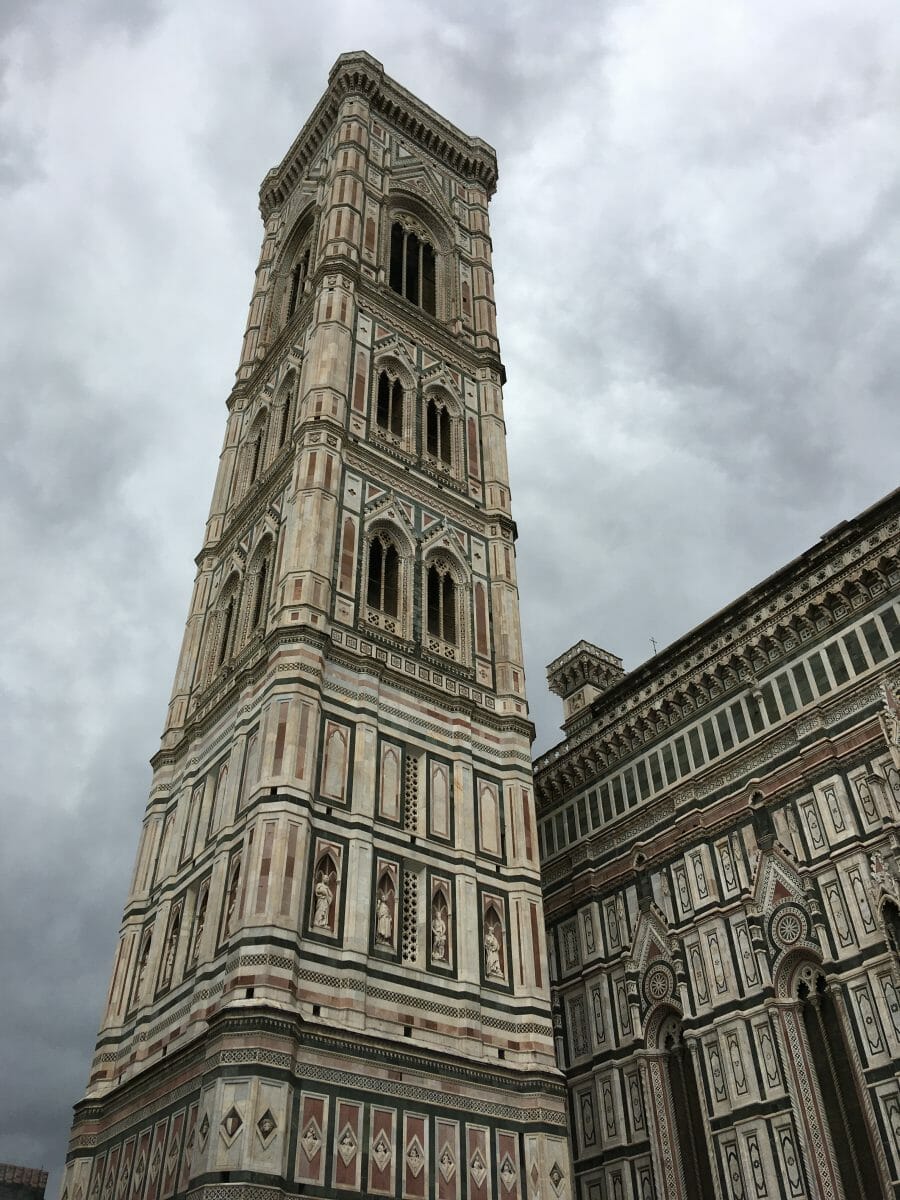 After the 563 steps up and another 563 back down, I take a pass on the bell tower which is……you guessed it…..another 530 steps to the top.  At my age, I’d rather take those same steps to the closest bar and slake my thirst…. which I do. 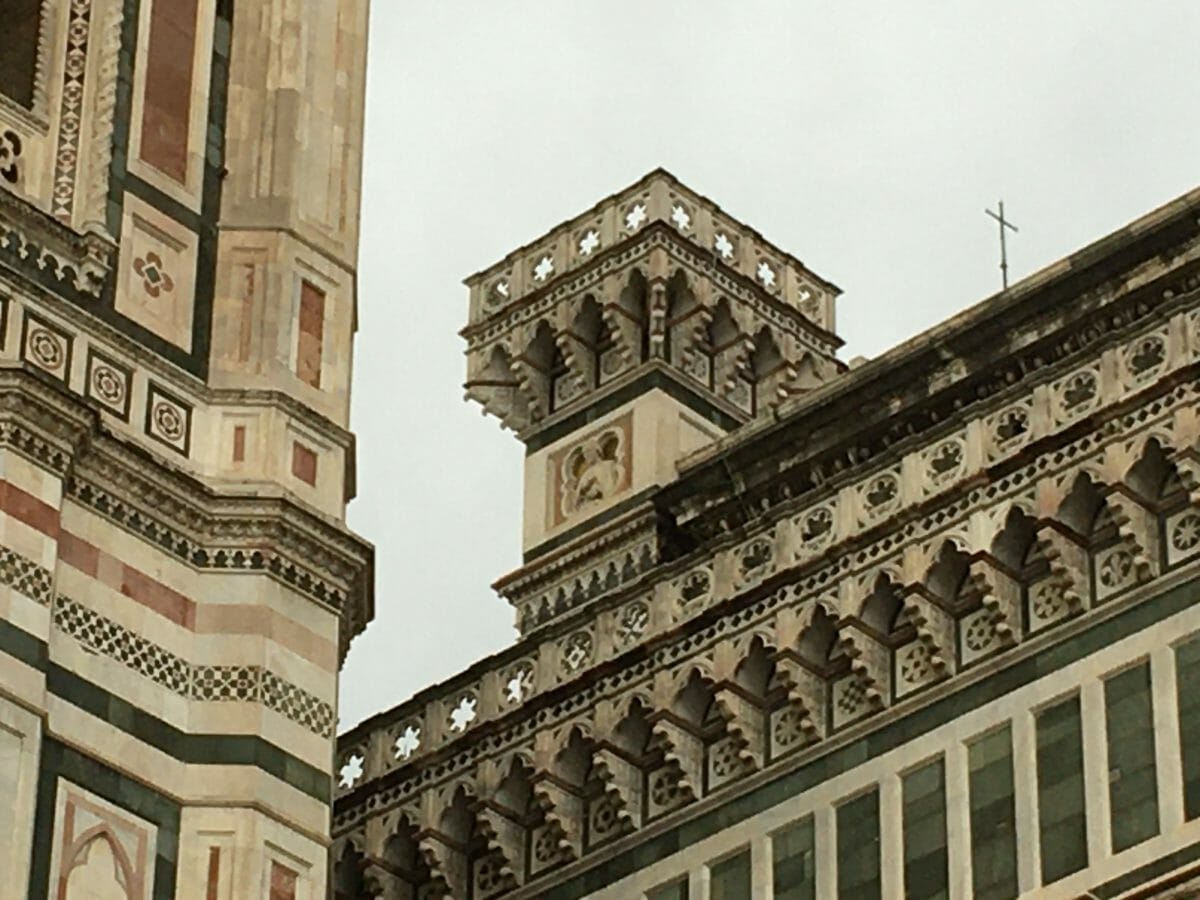 Here’s another church part–not sure what it serves–perhaps archers convincing the townspeople to attend services?  A TV antenna to the right–but it only gets one channel (if you follow my drift).  Did you know that the cross of the church is not from crucifixions, but an invention by Roman Emperor Constantine in 427 depicting two crossed swords–the unification of the Empire?  Read “Constantine’s Sword:  The Church and the Jews” by James Carroll for the real scoop.  Don’t be hoodwinked by “fake news.” 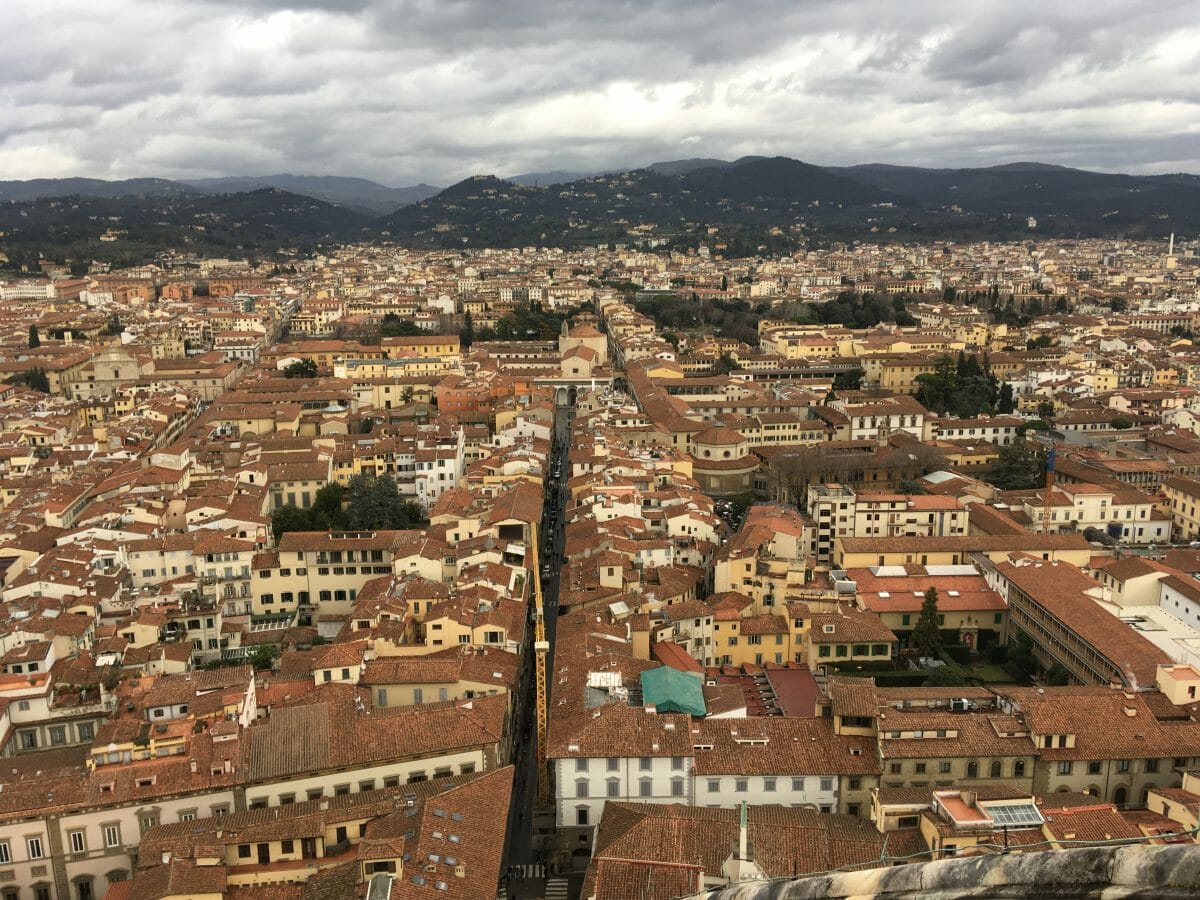 The view of Florence from the top is likely very similar to what it was when the church was built–in 1296. 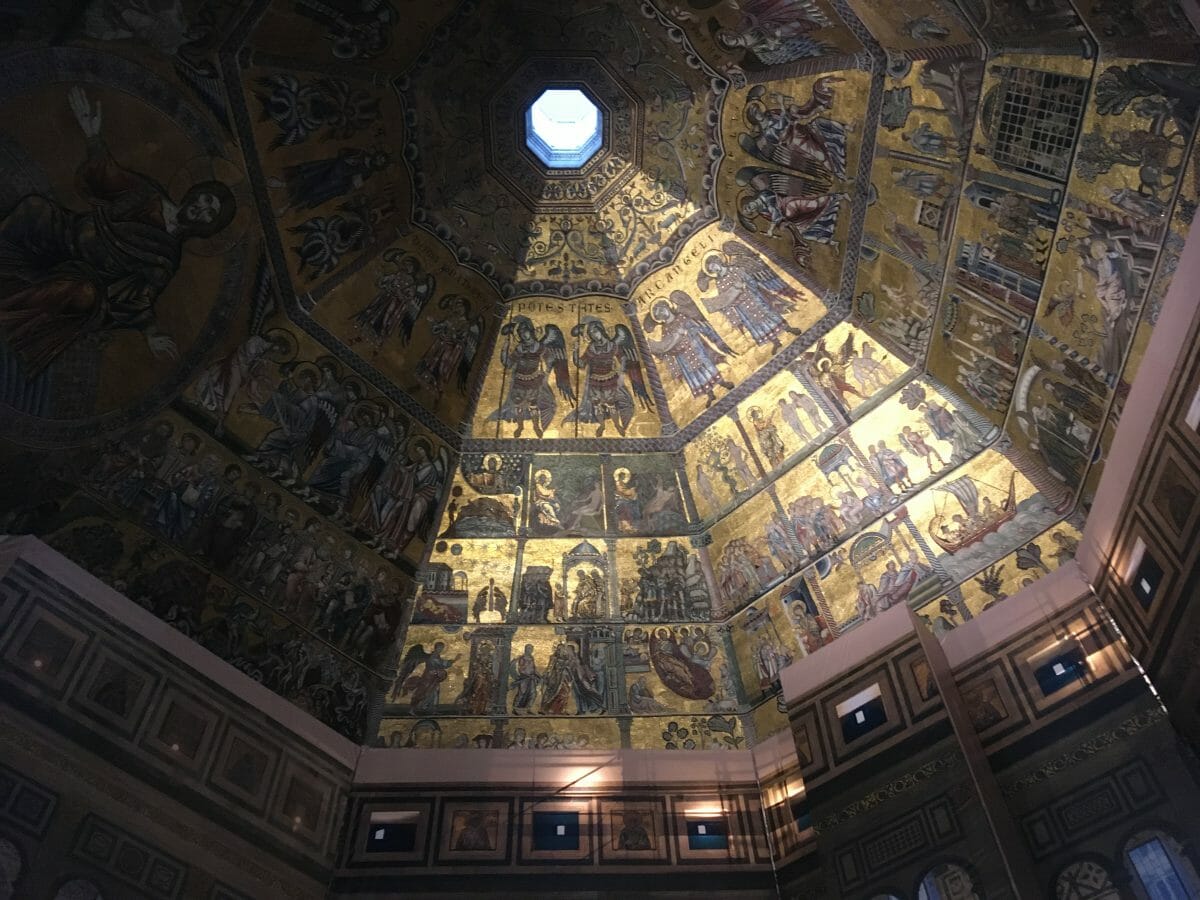 This is the smaller dome–again an octagon. 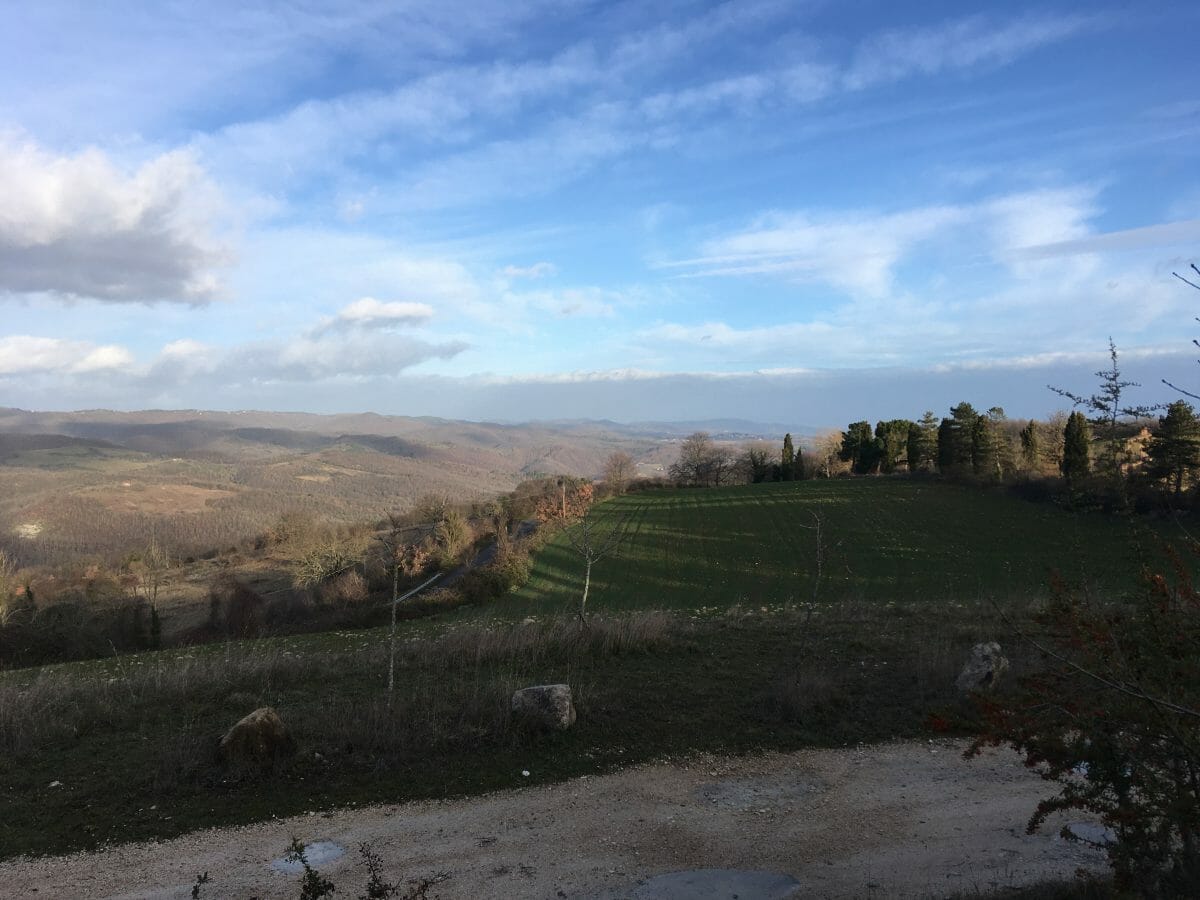 Enroute to Rome, Bruno and I (we’re driving now) stop to visit a friend, Stephano, who is an absolute renaissance man; fluent in several languages, a former ambassador for Italy to several countries, a sailor and ship model builder and an author/photographer and many other talents.  His place is in the Tuscan countryside and we are hosted to a wonderful evening full of conversation, fine wine and a delicious dinner.  One of his latest projects is to photograph all the old shipwrecks on the planet and write a book about them–I’m already working on a list in Alaska–we’re full of shipwrecks.  Thank you Stephan for a wonderful evening! 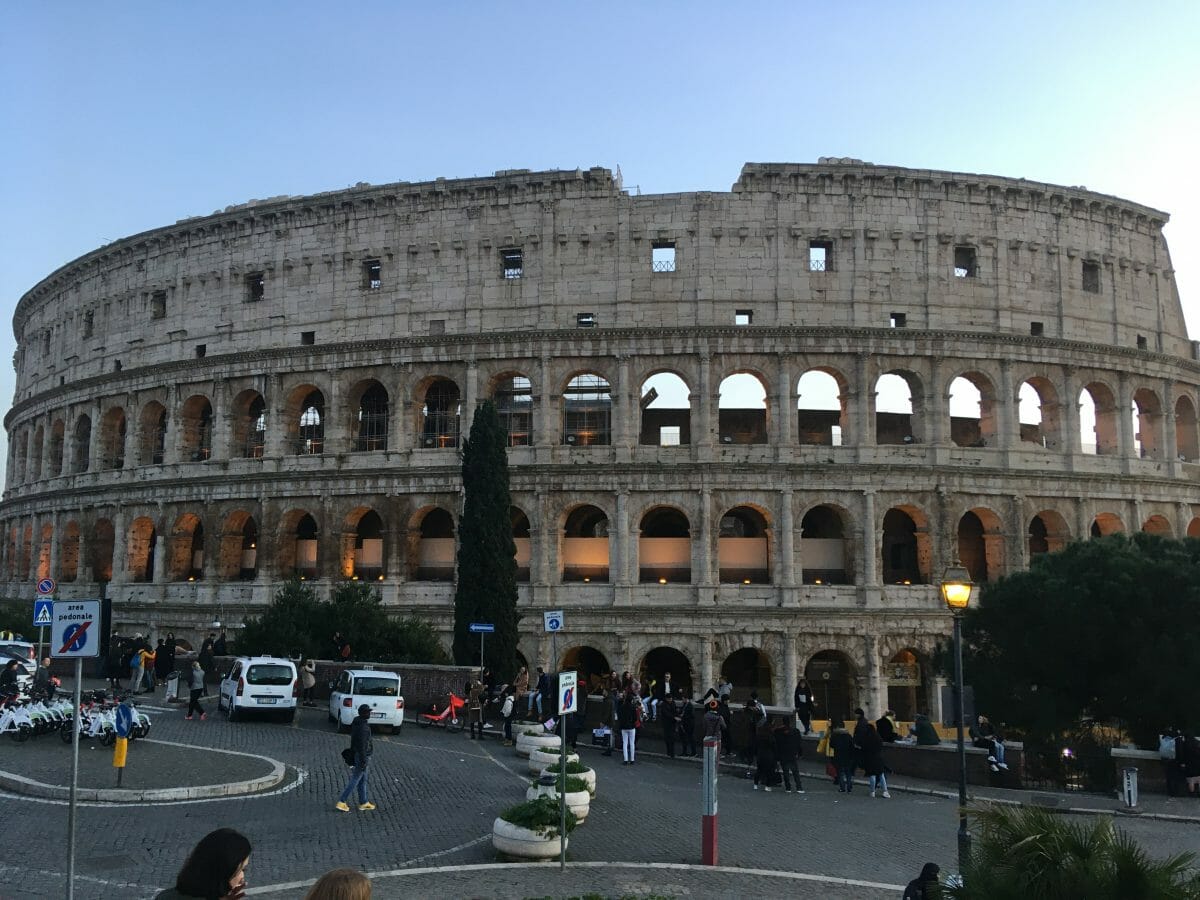 The next day, Bruno and I drive down to Rome and the first stop is the Coliseum.  In spite of it being the middle of winter, it was nearly surrounded with tourists with their selfy-sticks.  I don’t own a selfie-stick; I refuse to.  Like the huge churches of Europe, the Romans had a thing about colosseums and built them everywhere–and they were massive. 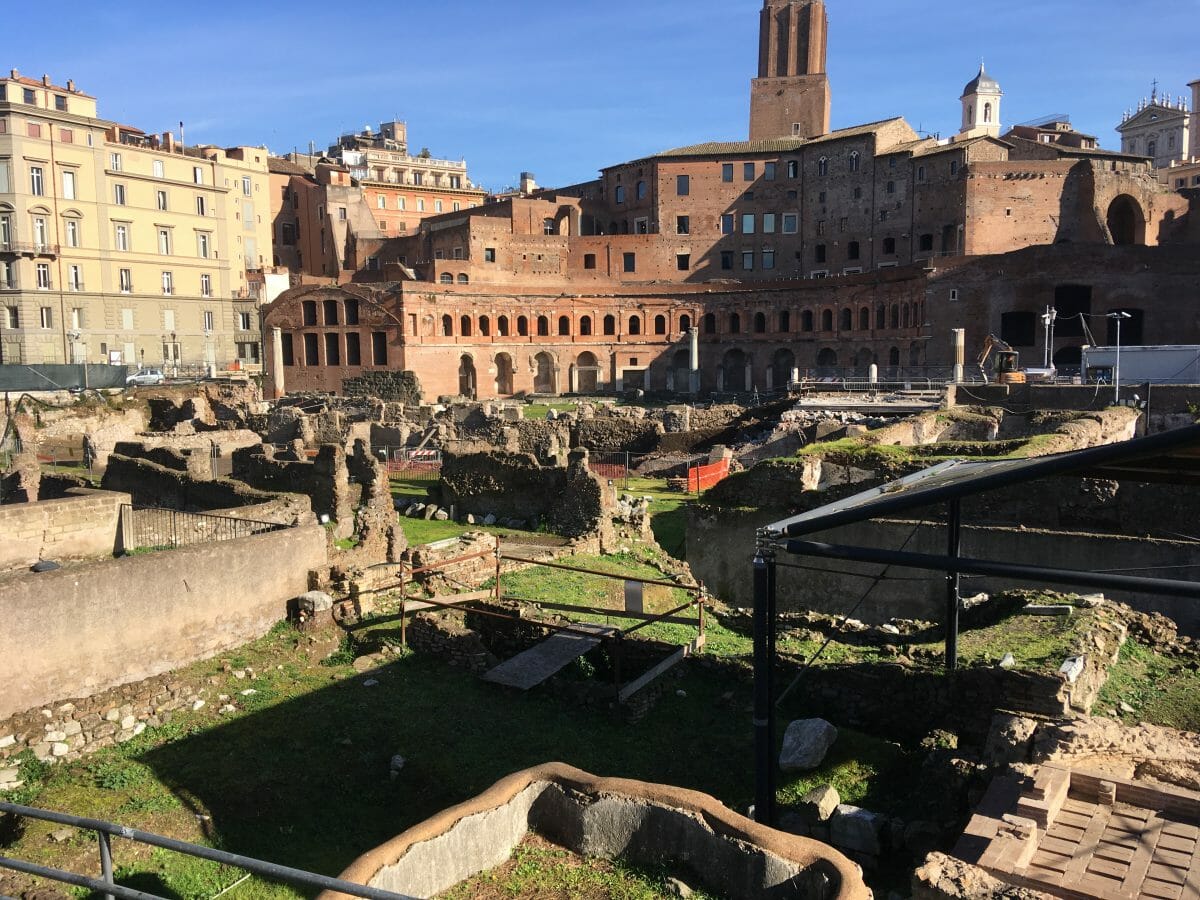 On the way to the Coliseum, we pass this excavation which digs down to the old Roman foundations.  Haven’t had a chance to look into this but I’m sure it’s in National Geographic or soon will be.  Lots of history here. 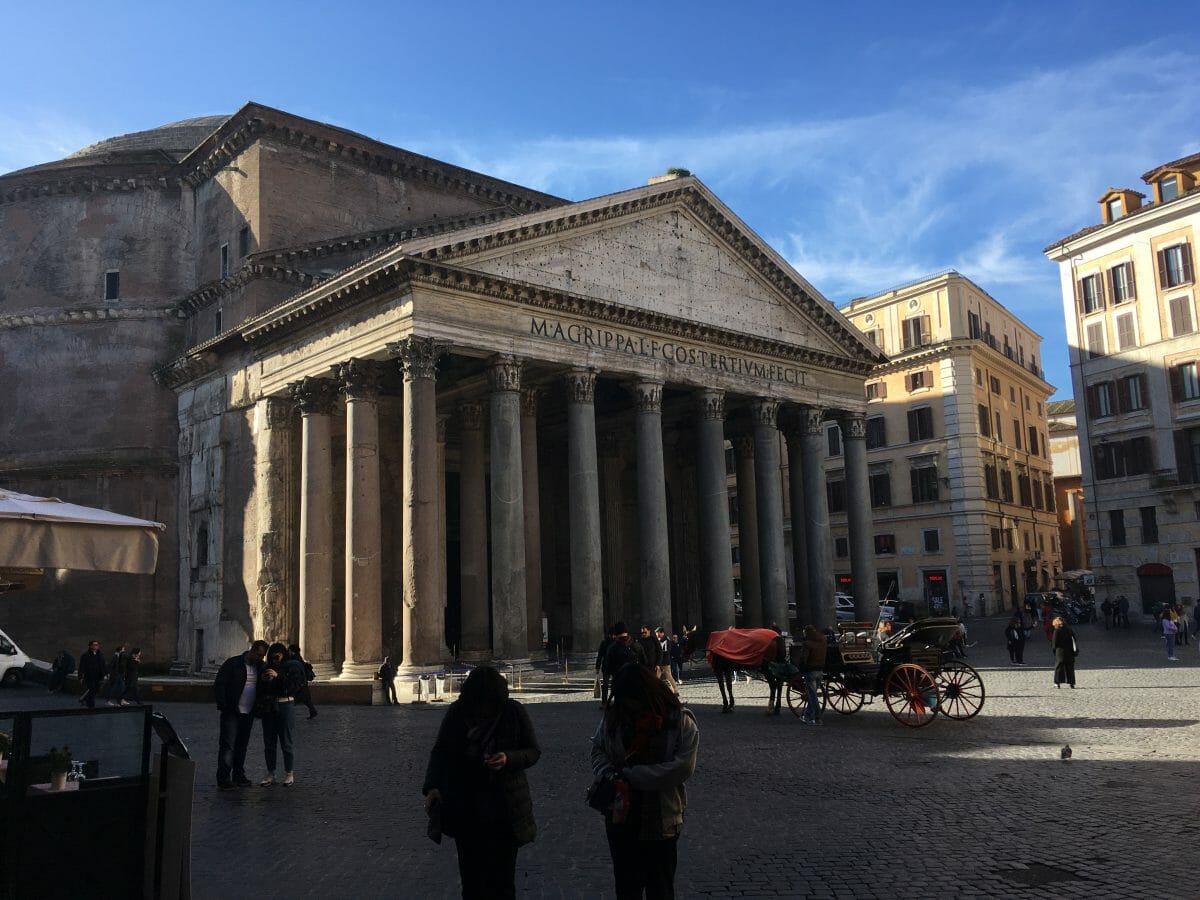 The Pantheon from Pan (all) and Theos (Gods) is our next stop, but this is just a nickname.  If you visit Rome, you have to visit this place–one of the larger and most complete buildings of this age on the planet.  It’s been in continuous use as a church since it was built in 127 AD (finished date).  All-in-all, I can’t help but think–which building caused more grief on this planet:  the Coliseum which staged lions eating people, or Roman Catholic Church which initiated the Crusades, where blood ran down the streets knee deep.  The best book on the Crusades I’ve read is by Karen Armstrong, “Holy War–The Crusades and their Impact on Today’s World”. It all started here with about a dozen gods. 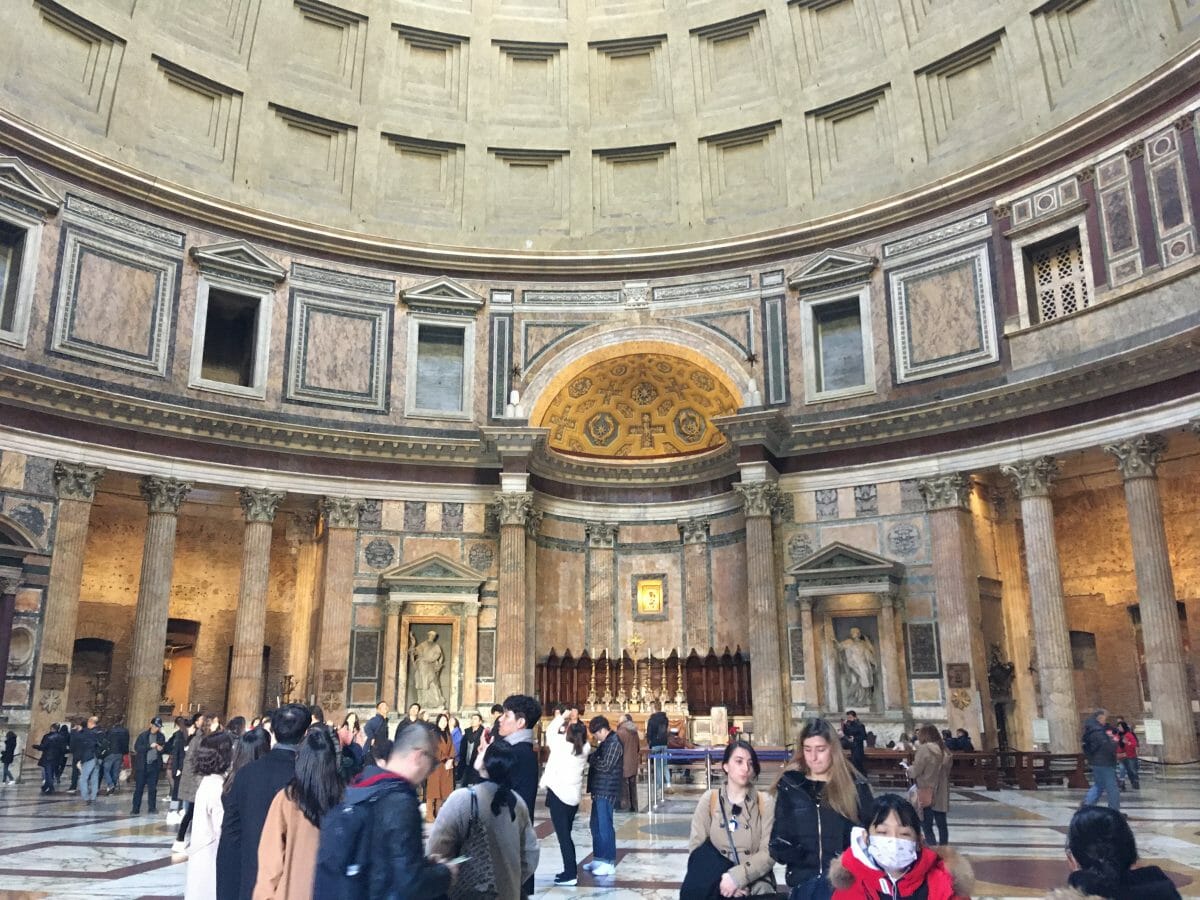 The inside of the Pantheon–quite a few tourists.  I’m one of them. 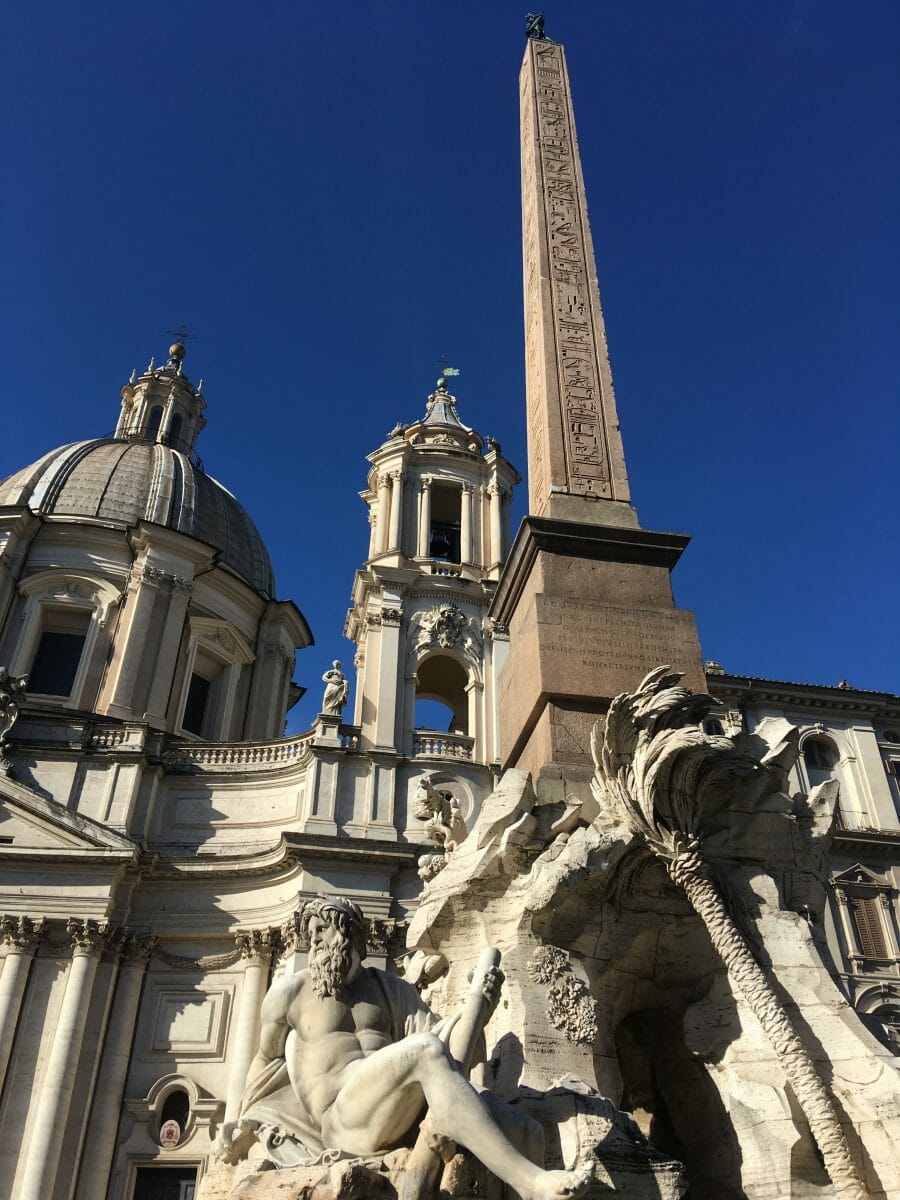 Besides importing hungry lions (read the poem Albert and the Lion here), the Romans plundered Egypt of about half of their stuff.  On nearly all major street intersections in old Rome are Egyptian obelisks.  I wonder how many they left behind in ancient Egypt?   But then, the British stole all the Roman artifacts, which now sit in British museums (see earlier post), so I guess they had to replace them with more looting.  Methinks that every nation should return these items to their original countries.  If we did that, we wouldn’t need ambassadors to smooth over internecine problems.  And the Middle East is no exception.  During the GW Bush invasion of Iraq, America did nothing to preserve the Baghdad Museum and 10,000 years worth of cuneiform tablets disappeared–that’s ten thousand years of human history, wiped out.  I’ll check into this when I visit there…… 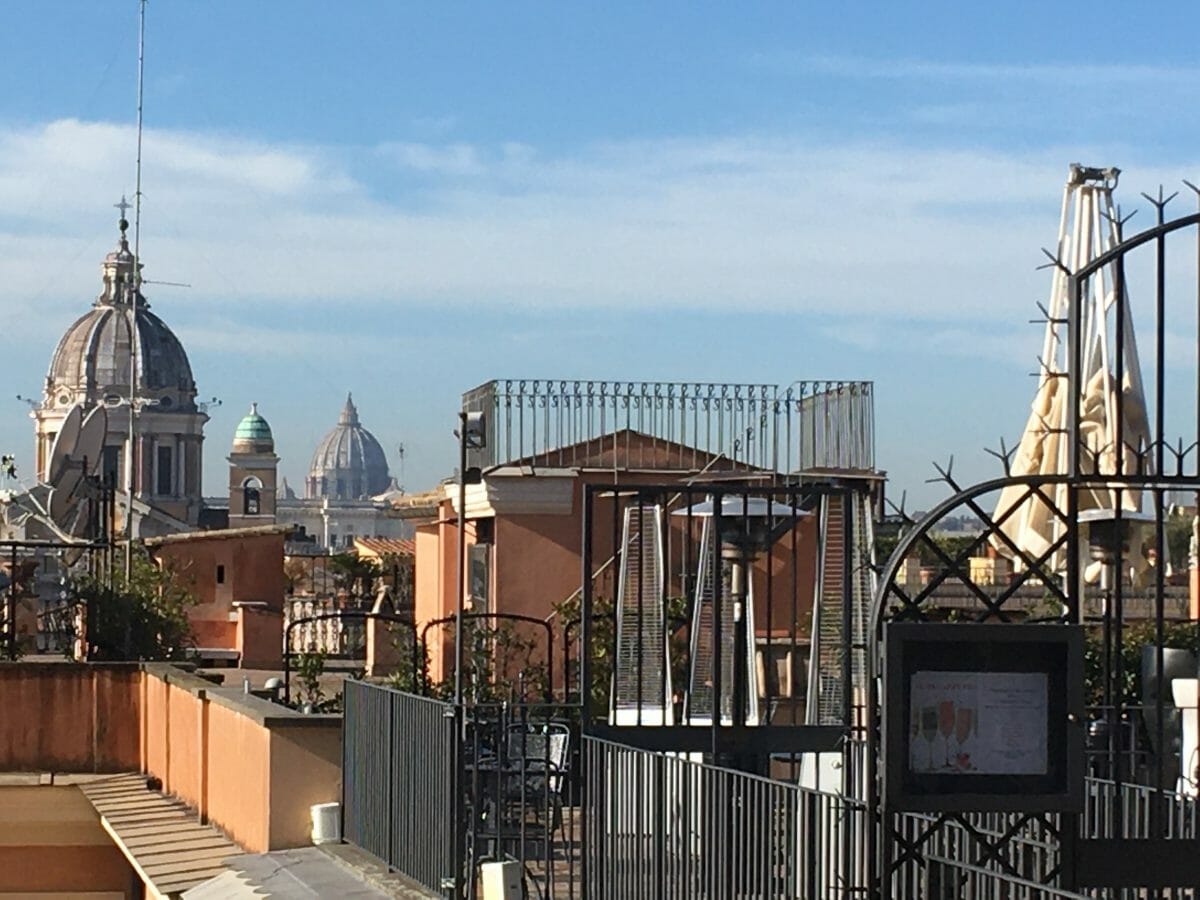 Only stayed in Rome for two nights (three, if you count my return from Capri) so here’s a shot across to the Vatican and St. Peter’s dome.  I’ve got to visit this place sometime–I’ll bet there a few skeletons in those closets……Stay tuned–Capri is next!  (I’m publishing this but will continue to edit–want to get this up online now….)