But, I’ll start in Berlin…. 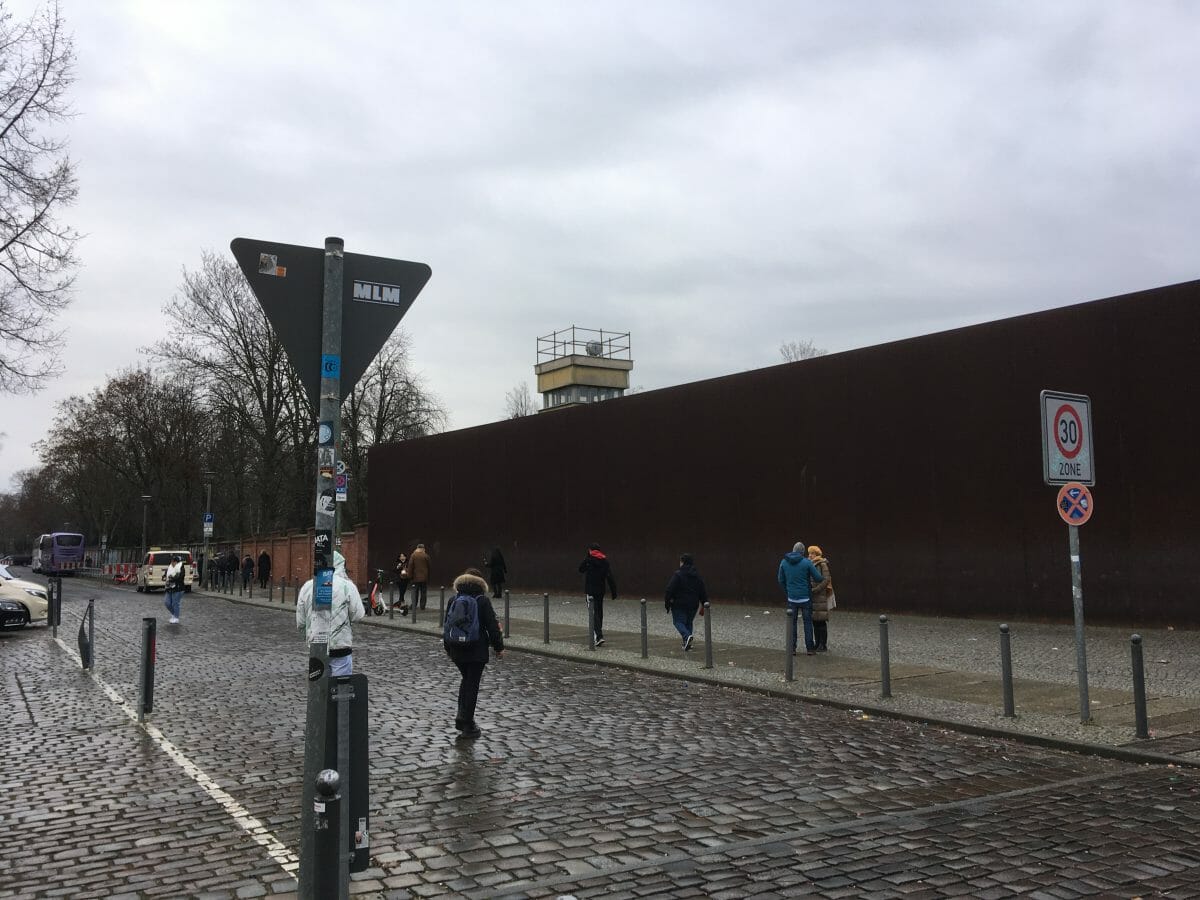 Leaving Oslo and heading south takes me to warmer weather.  My first stop is quite serindepitous when I receive an invite from Bernd (and his wife Christine), an avid reader of this blog,  to visit Berlin.  The last time I saw Bernd was in 2013 when he was kayaking the SE Alaska coastline and we hosted him for dinner.  This time, he and his wife put on a sumptuous dinner for me (and another filling breakfast) after a tour of Berlin’s “New” Museum where Nefertiti is exhibited–no photos allowed there.  The next morning Bernd takes me to the Berlin Wall which one could write a book about. 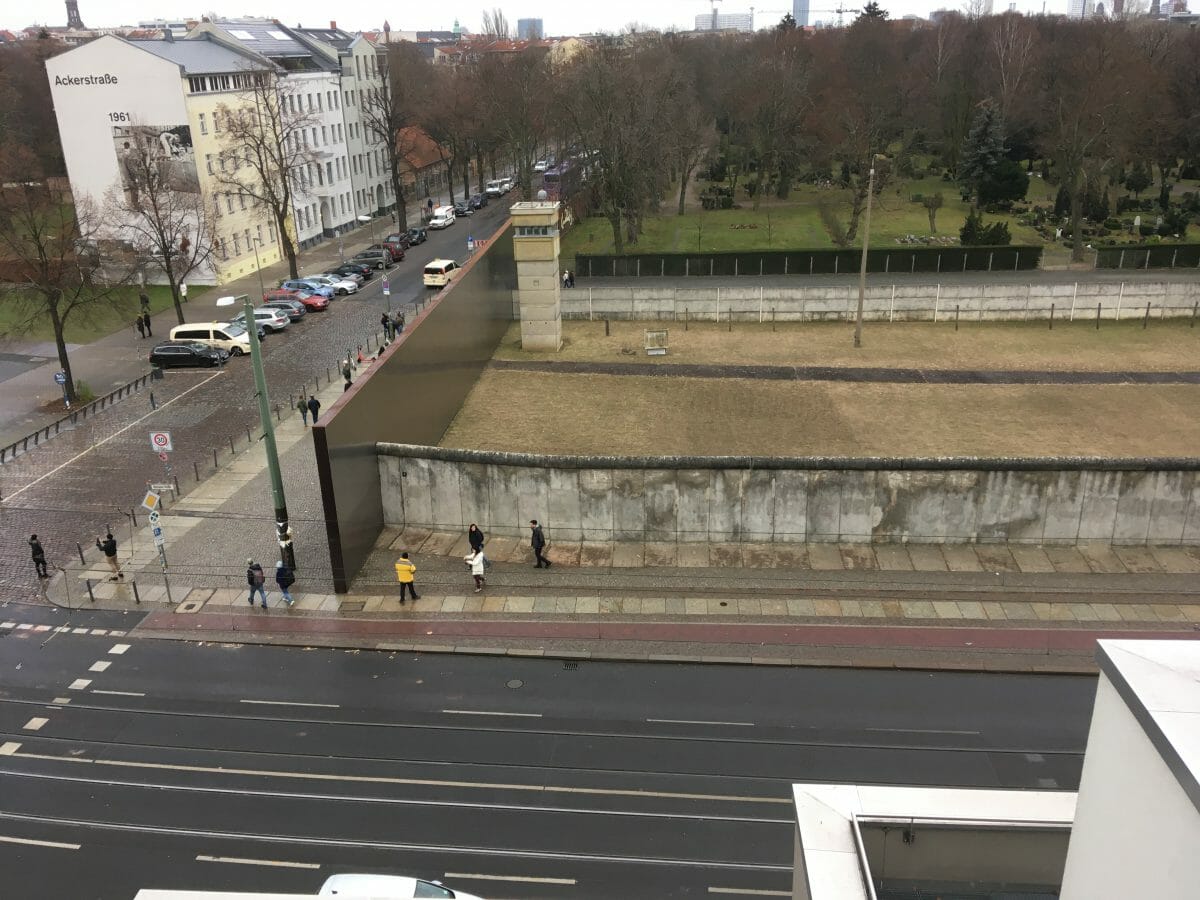 I remember the Berlin Wall well, when it was put up and when it came down,  Apparently, Donald Trump doesn’t.  Here is the wall from an above perspective–the Soviets decided to trap their occupied Germany behind this wall to keep the Germans from escaping to the West–didn’t work and neither has any other wall that was built–from the Great Wall to Trump’s Mexican Wall.   Some things we never learn…..Donald. 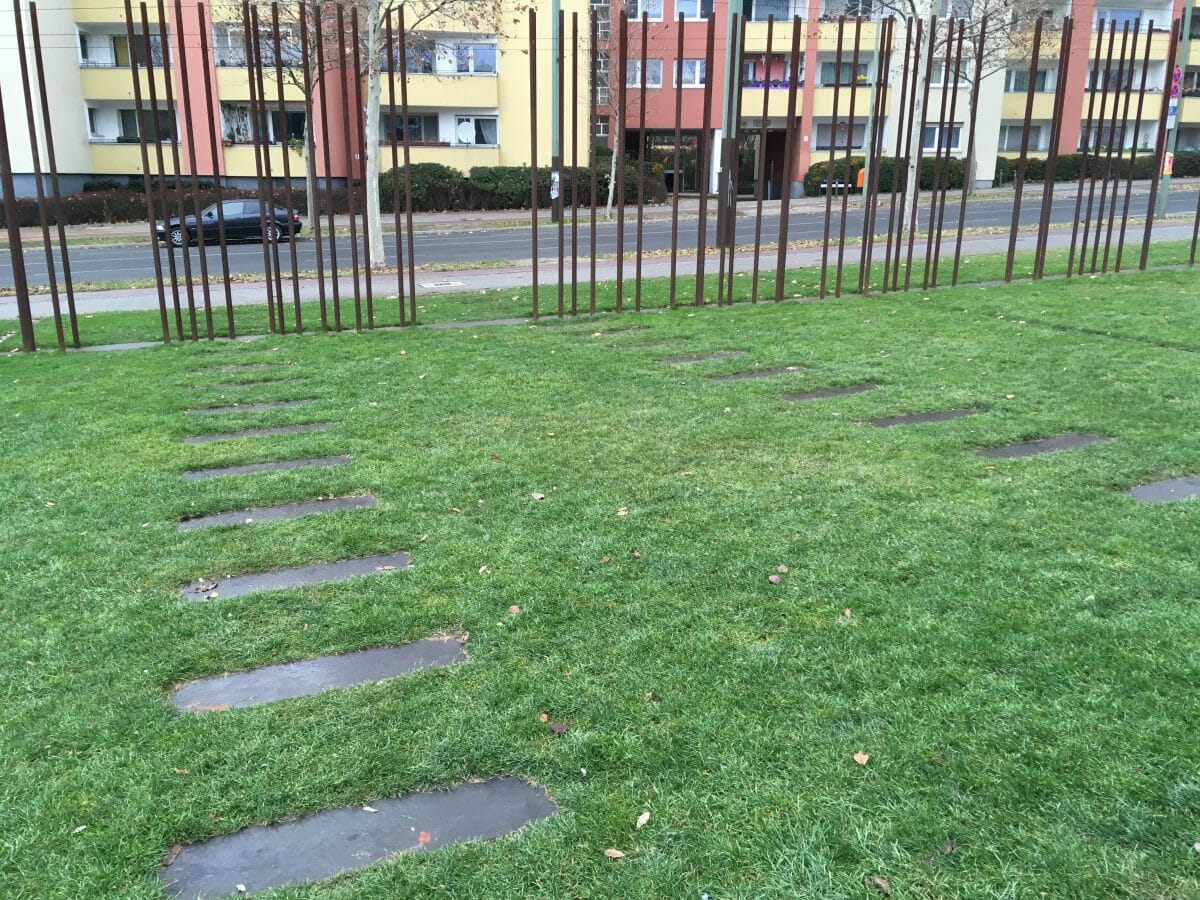 For those who couldn’t climb the wall, they tunneled under the ground marked here by stone slabs.  There were likely hundreds of tunnels.  Bernd and Christine were both raised in East Germany and were always told the wall kept West Germans from flooding in to the Soviet paradise.  Except the sharp spikes on the wall’s top and other anti-personnel devices were all pointed the other way.  The wall went up in 1961 and came down in 1991.  About 80 escapees died (shot by the Soviets) trying to escape during this time, however in 1961 nearly 9000 left for the West through Berlin.  That number dropped after the wall was built to 2300 per year for the next decade, then to 900 per year in the 1970s and to about 350 per year in the 1980s. 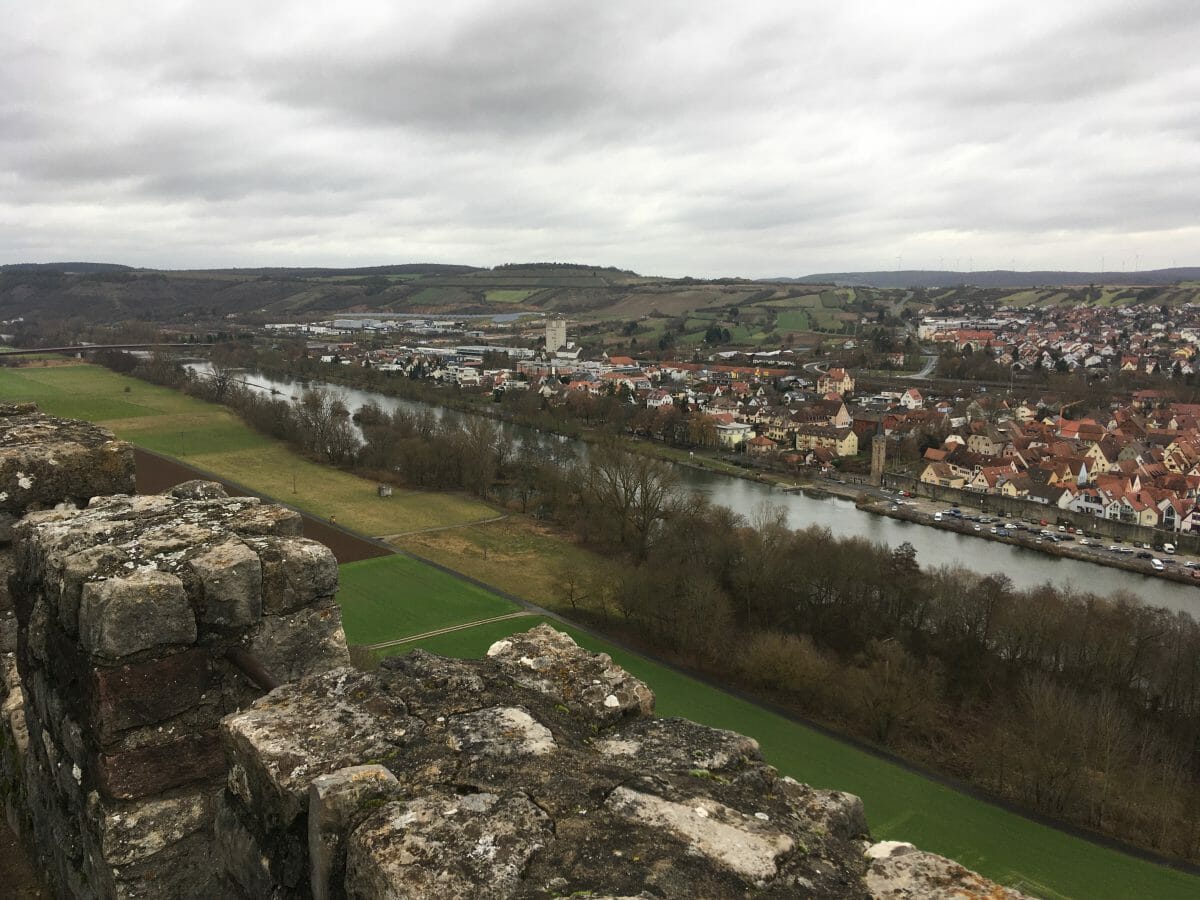 Then it’s on to Karlstadt where I meet up with my good friend Udo and his wife Jutta.  We take a hike around the area the next day.  Here’s the view from the Castle on the Hill–for lack of a better name.  This is a classic German town lying on the Main River–always a pleasure to visit here.

The older I get the more I like these benches!  We hike about 5 kilometers over the hills to a small town of Rohrbach where we sip some wine.  Not a bad way to spend the day! 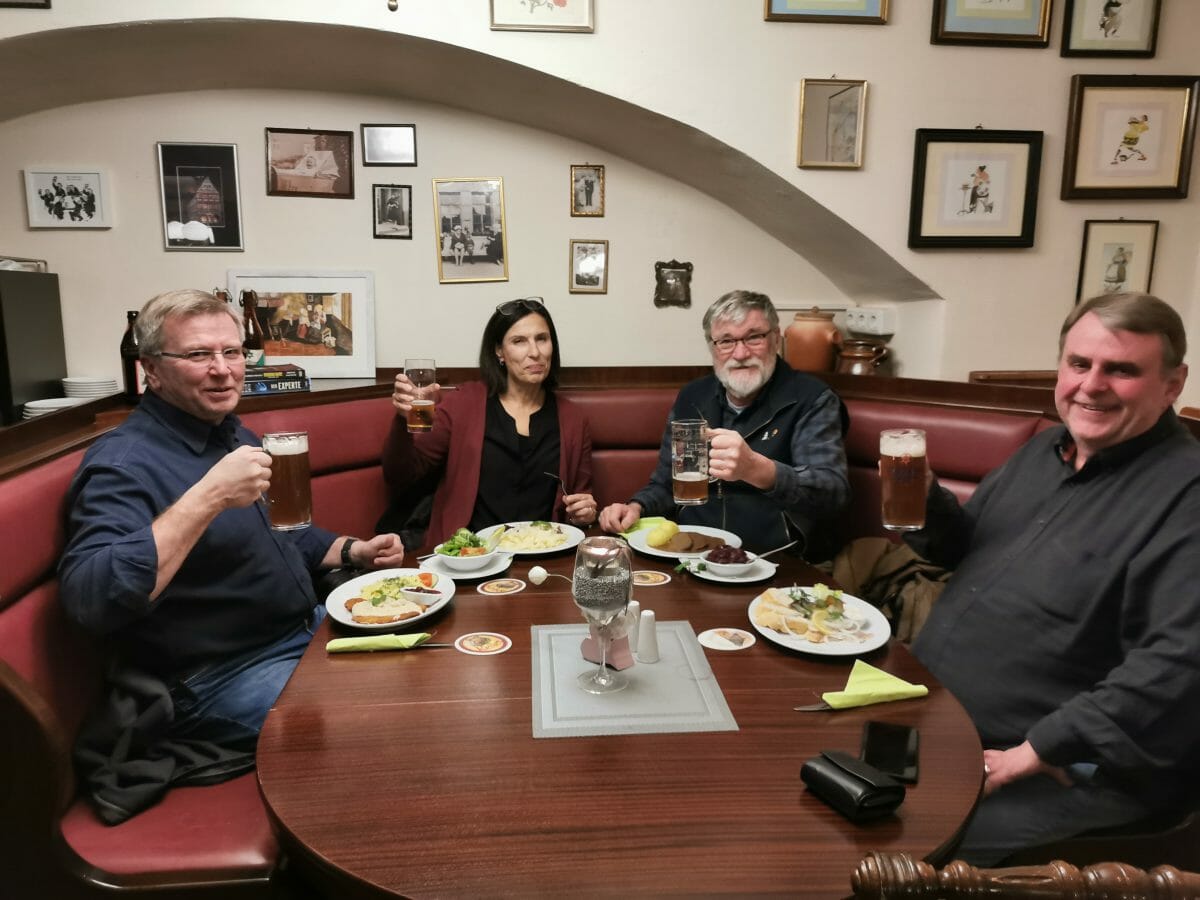 My last night, we include “The Colonel” at our table.  They are all planning a motorcycle trip to Scotland so we’re getting in the mood for the Scottish pubs. 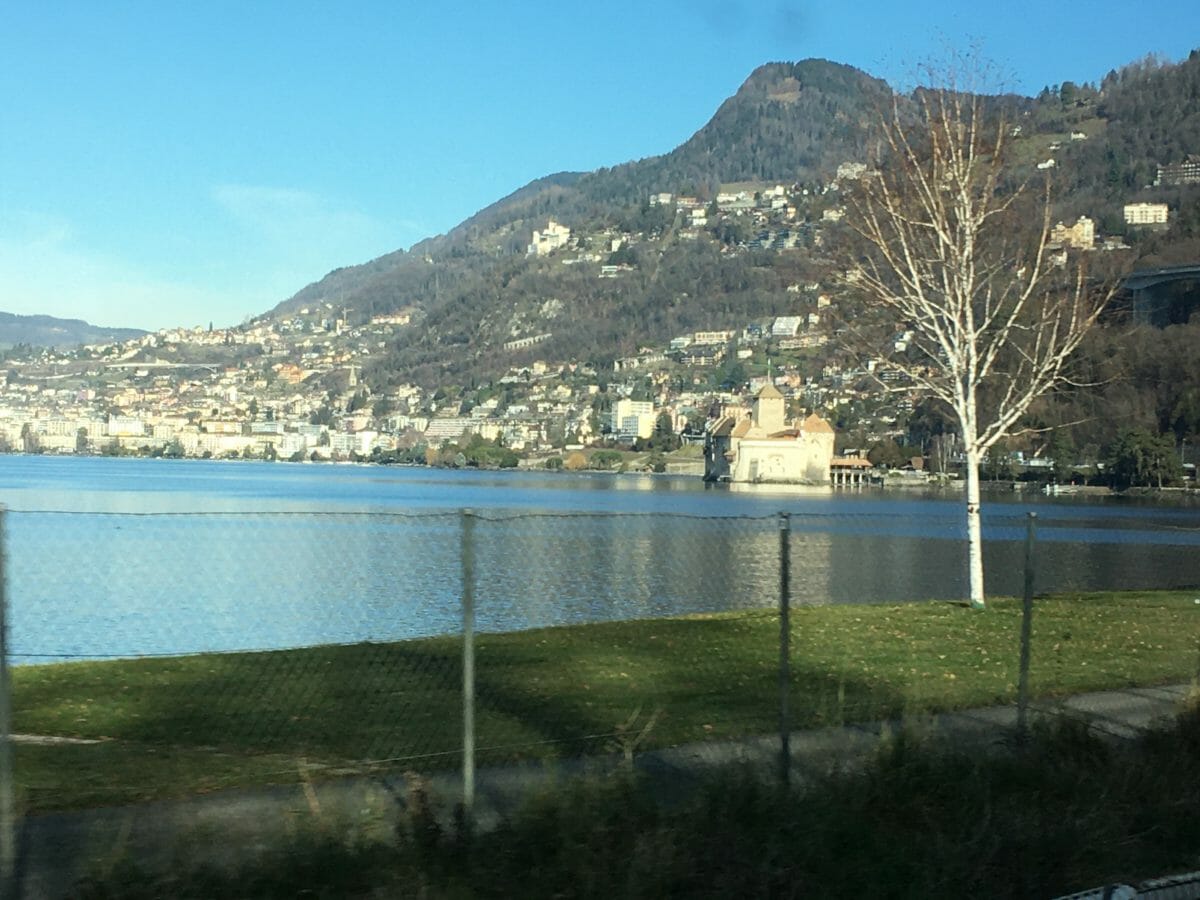 Then it’s on to Leysin Switzerland.  Here the train wends it’s way around Lake Geneva past Lausanne and Montreux.  Mountains appear. 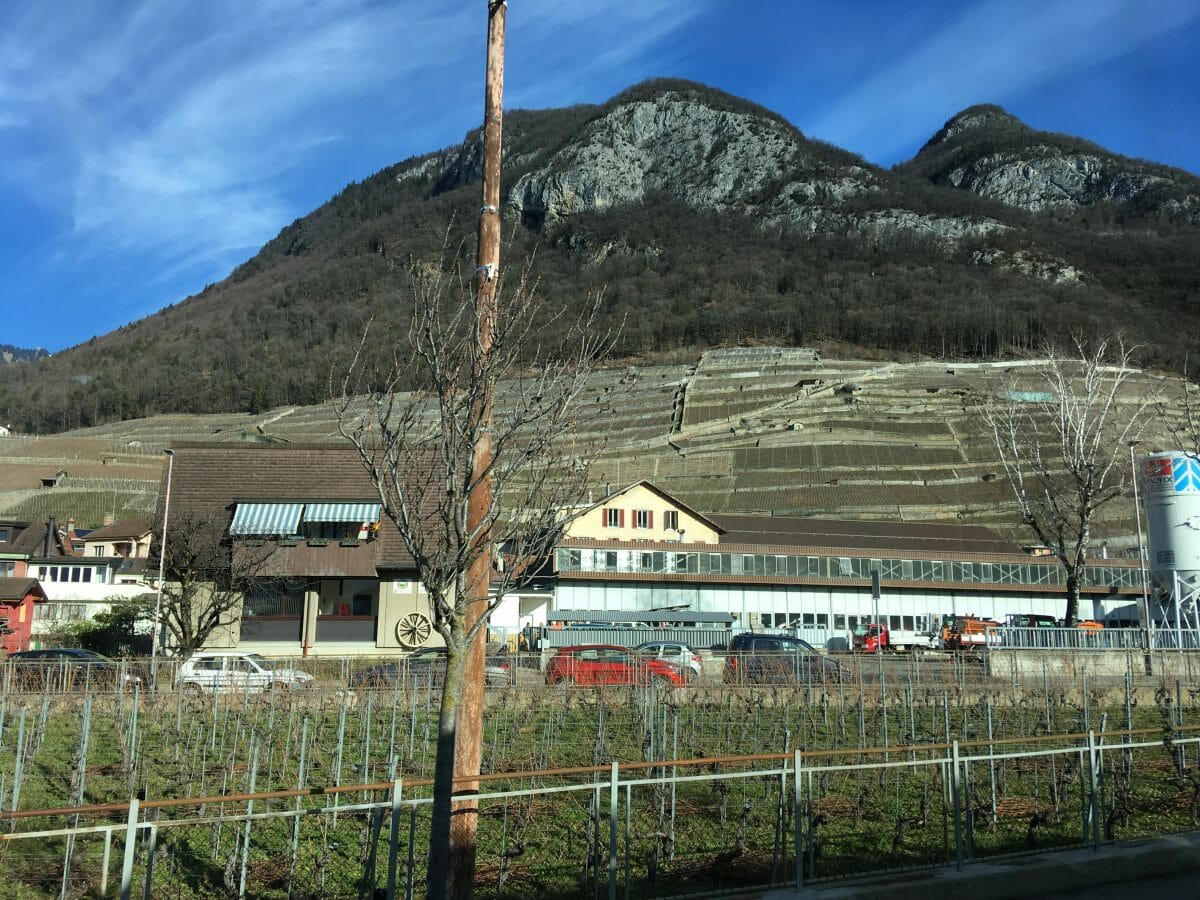 Real estate is precious in Switzerland so every inch of land is cultivated carefully–in this case…..more wine grapes. One thing about Swiss farms, is they’re immaculately organized and productive.  Limestone cliffs appear as the terrain gets steeper. 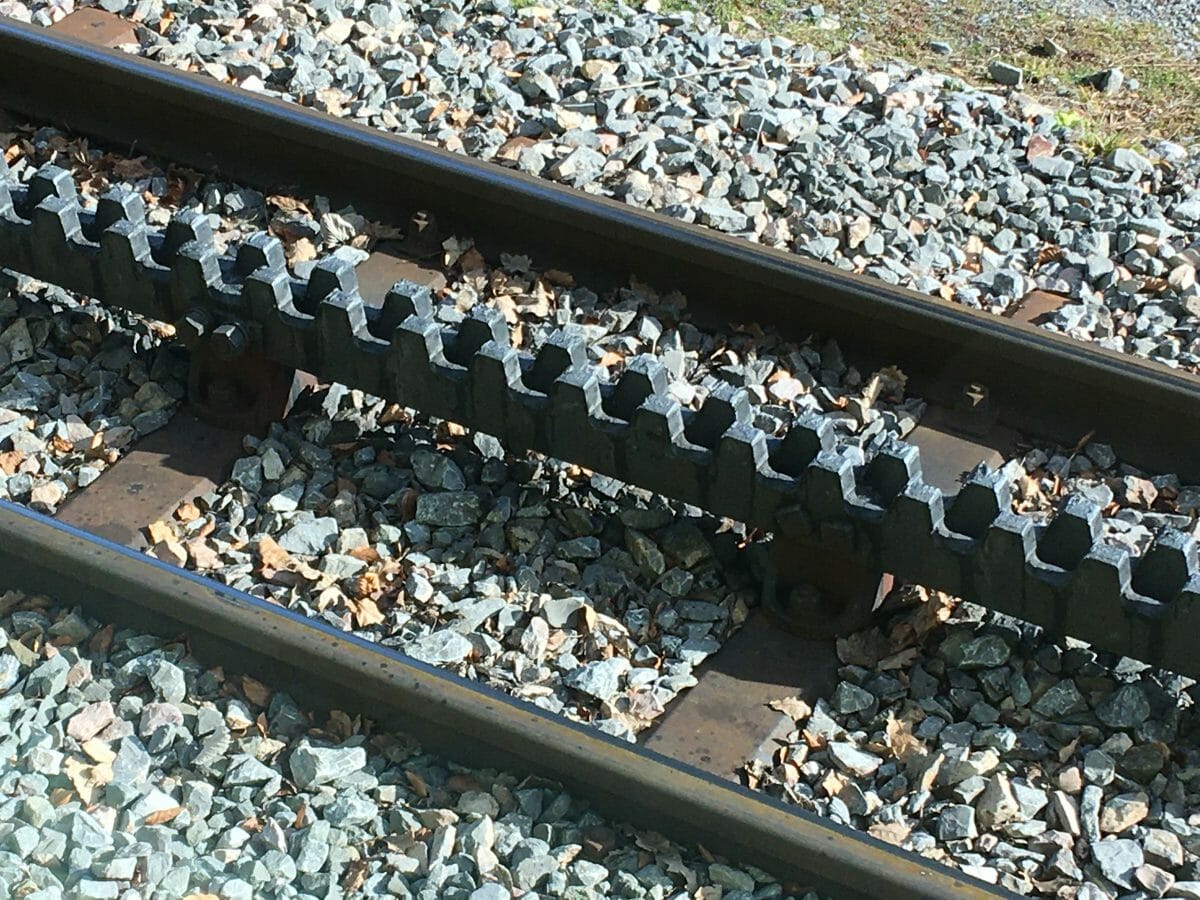 Cog trains are the solution to steep valleys and the ride from Aigle (Eagle) to Leysin is quite an experience.  I first noted the sharply tilted seat bottoms on the tramcar–which was level when I boarded–and it quickly became clear when we began the climb up to Leysin.  The fun began as the angle of the track increased to roller-coaster proportions. 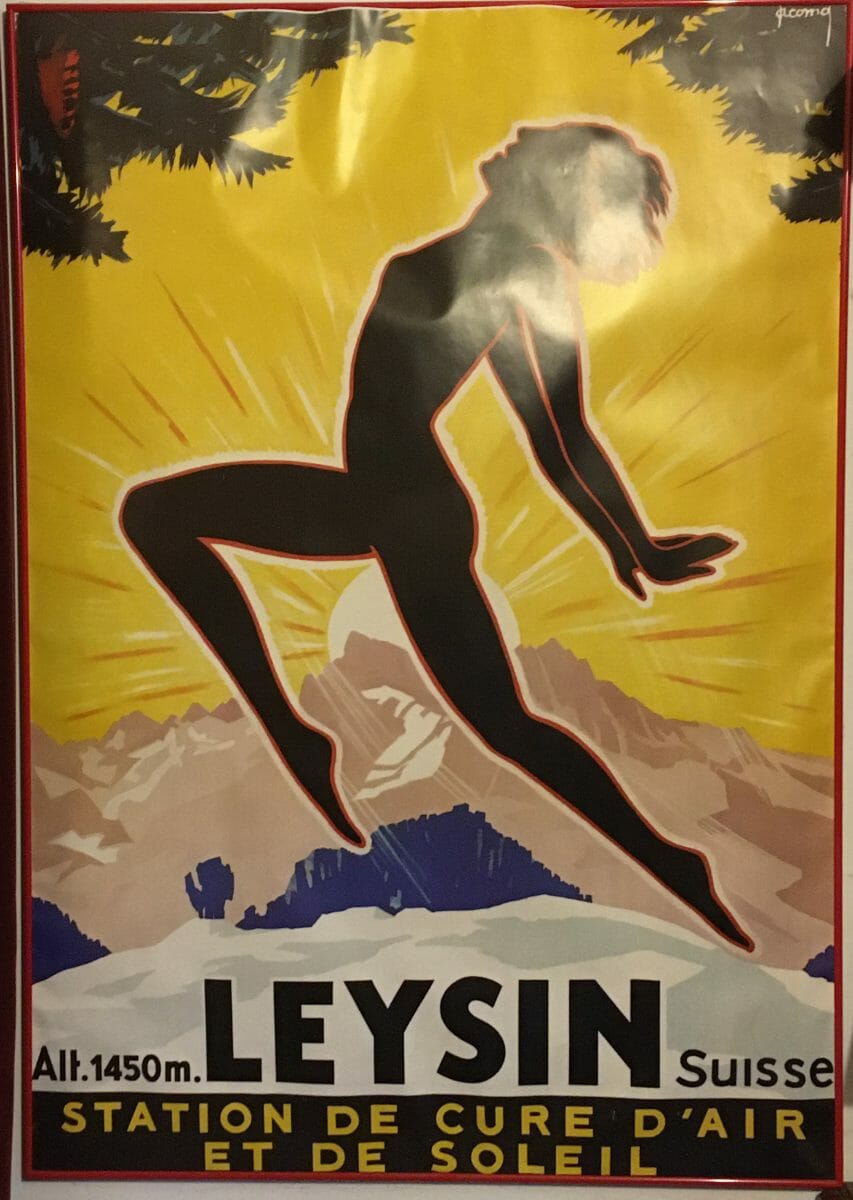 A poster in my lodgings.  Leysin was initially a spa for tubercular patients, for a century ending in about 1940;  the high, sunny mountain air was thought to be the cure.  Many in Europe came down with this malady which spread quickly aided by the ubiquitous use of coal for heat.  My chalet, Les Airelles, was built in 1849 for such purposes for a Russian princess.  Frederick Chopin succumbed to TB when he was only 39 years old–imagine what we lost to this disease–which struck hardest in the heart of the industrial revolution.  It was antibiotics that revamped Leysin from a TB sanatorium town to recreation–a century later.  Many of the large sanatoria became schools; one of which is the Leysin American School…… 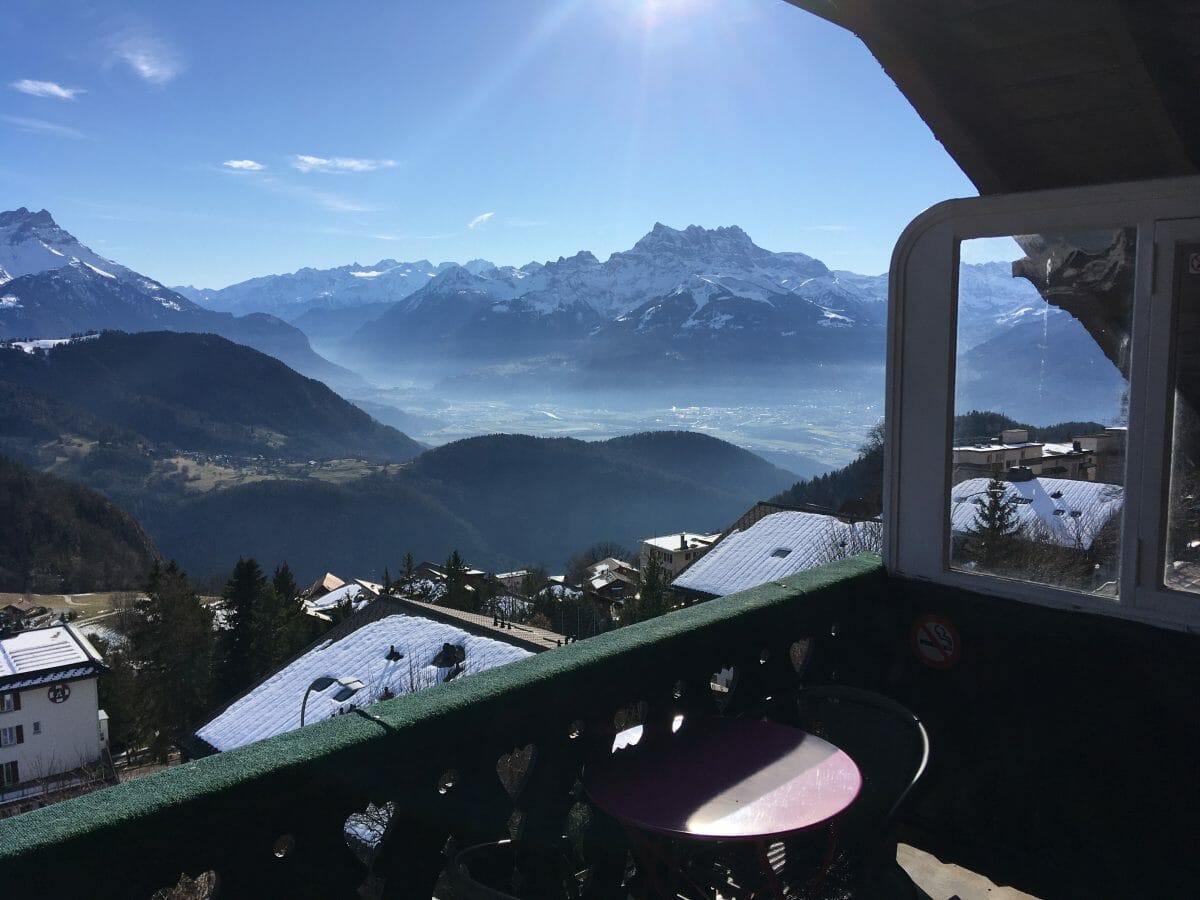 My room with a view.  Simply spectacular vistas stretching out 3000′ below my balcony.  I’ve the entire top floor to myself.  Helen (from Chicago) who married a Swiss, gives me a thorough tour of the facility.   I highly encourage anyone visiting Leysin to stay here–I could have stayed a week or longer.  The cog train, just 100 meters from my door, continues up to ski resorts and alpine hiking. 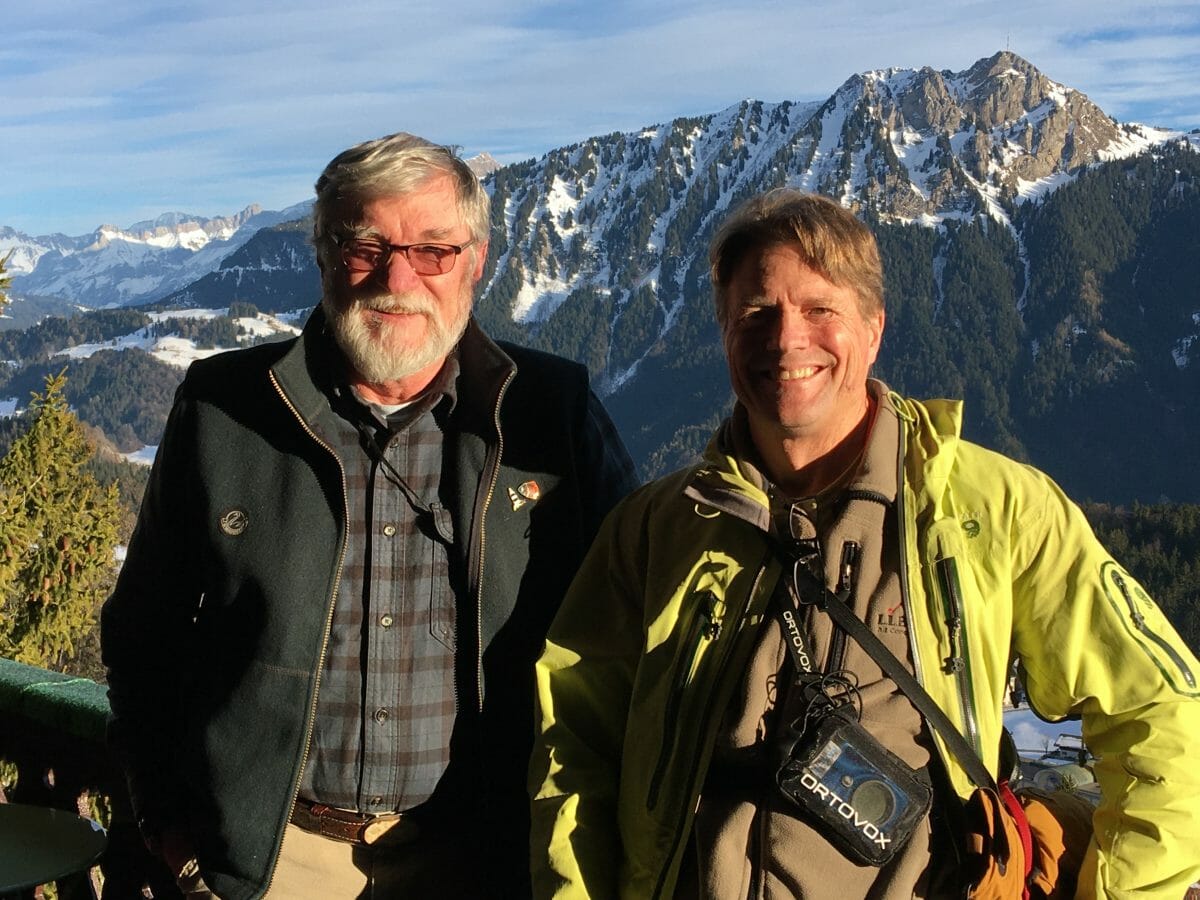 My reason to visit Leysin is an old friend, John Harlin III.  John’s father, II, was a central climbing figure in Europe in the early 1960s but fell to his death during a direct winter ascent of the north face of the Eiger in 1966.  This climb captivated most in Europe at the time and John II’s death dominated the headlines, even the front page of the “Stars and Stripes” which I read in Vietnam.   Many books and movies have been produced about about this climb.  John III is featured climbing “the Eigerwand”  in a stunning IMAX film about him and his father. 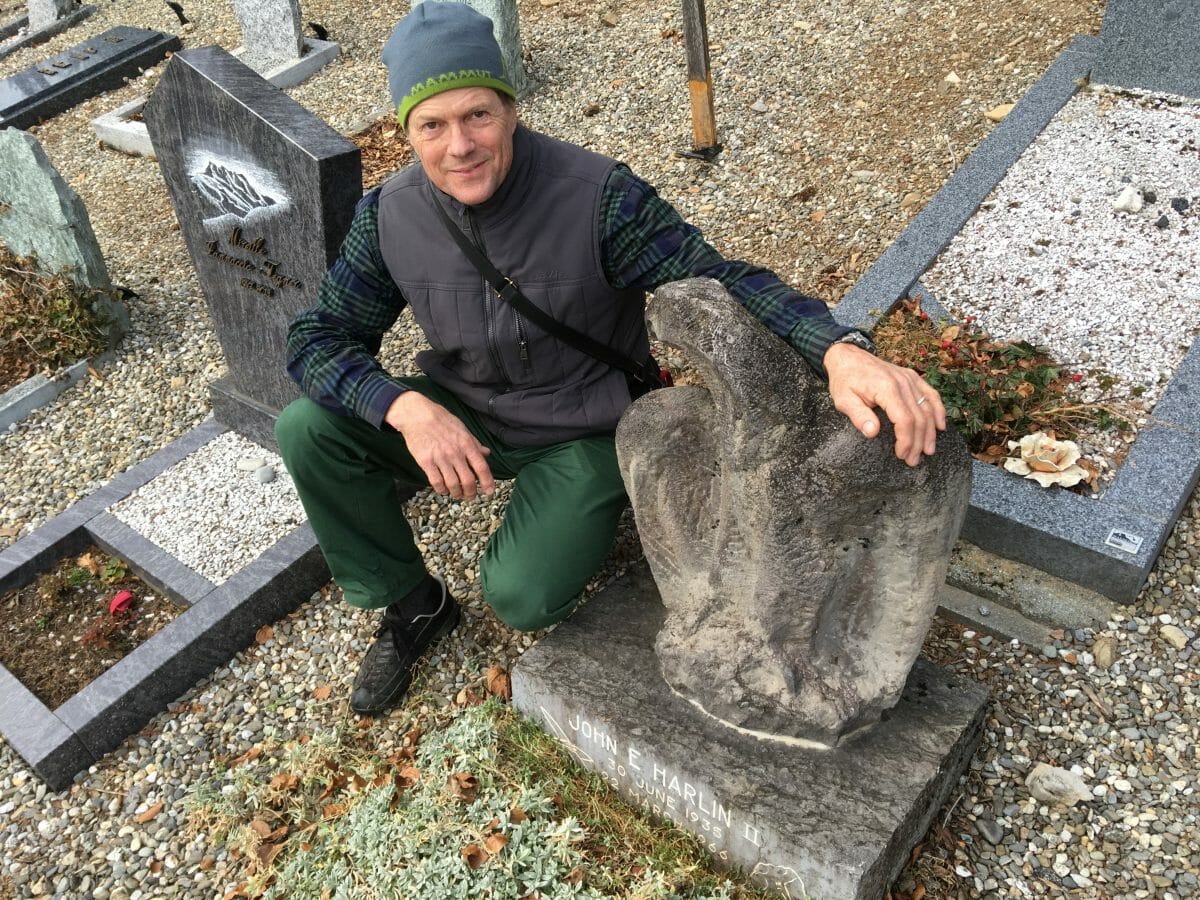 We visit John’s father’s grave, spruce it up a bit and admire the tremendous views from this spot.  John III not only continued in his father’s footsteps, but exceeded in them, climbing and skiing major routes world-wide.  He was editor of the American Alpine Journal and now runs the school his parents worked at in the mid-60s:  The Alpine Institute at the Leysin American School.  We continue our walk throughout the area with John pointing out the student climbing practice areas and lofty peaks above.  We join Larry and Martine for a wonderful soup dinner perched high above this beautiful valley. Then we immediately began planning a reciprocal visit on a Pacific NW tugboat.   Life doesn’t get better than this! 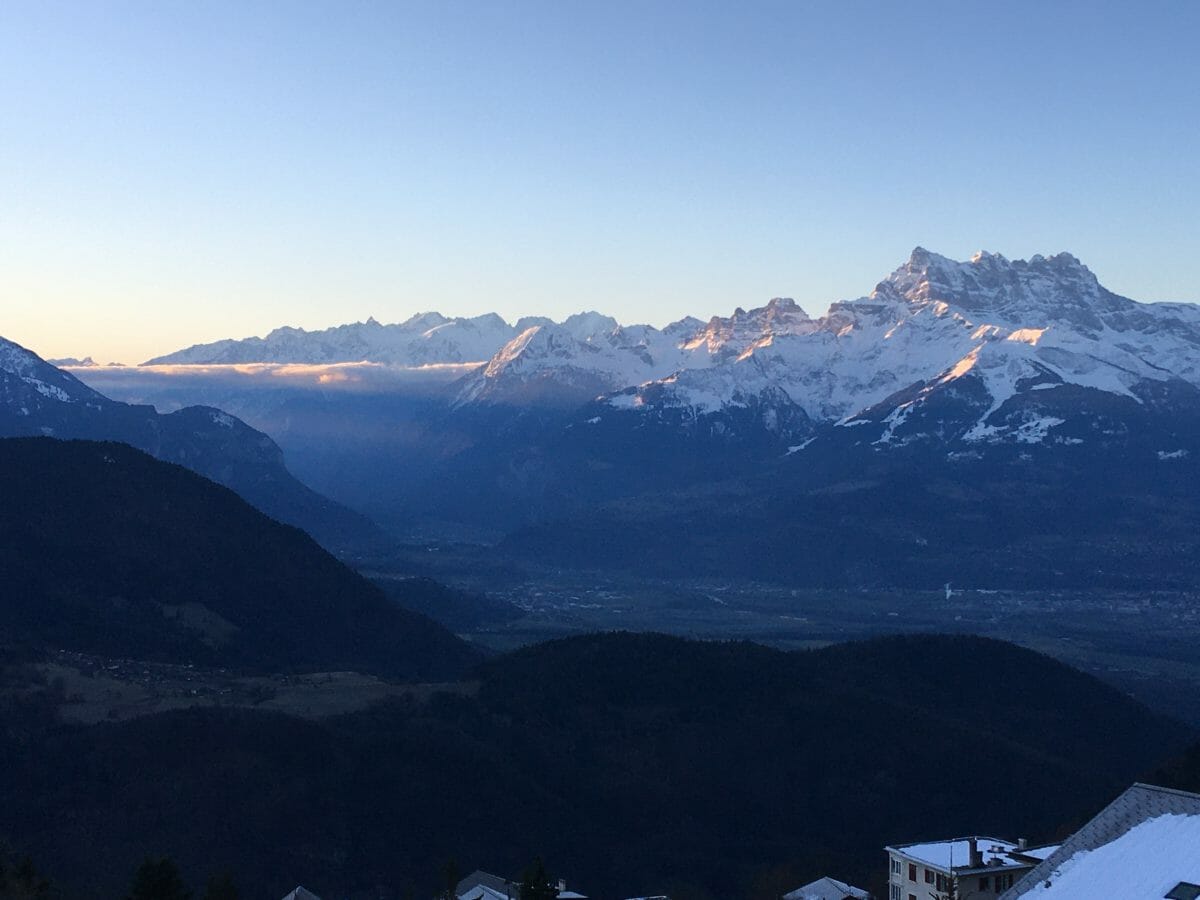 Mt. Blanc lies behind the Dents du Midi, the main peak in this photo. The skyline is also the border peaks of Switzerland with France–tomorrow’s adventure. 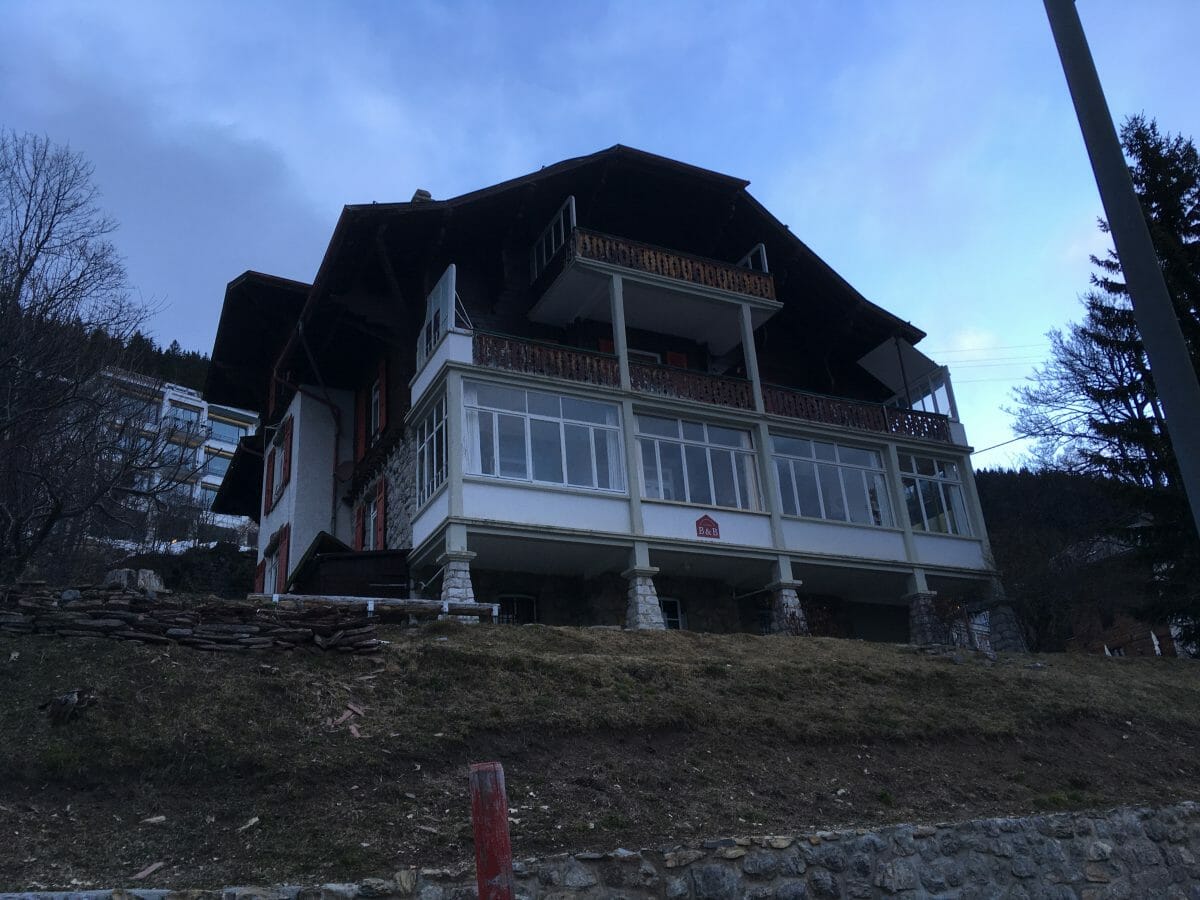 Sad to leave this wonderful place–Les Airelles.  My balcony looks down on me as I work my way back to the cog-train only 100 meters distant. 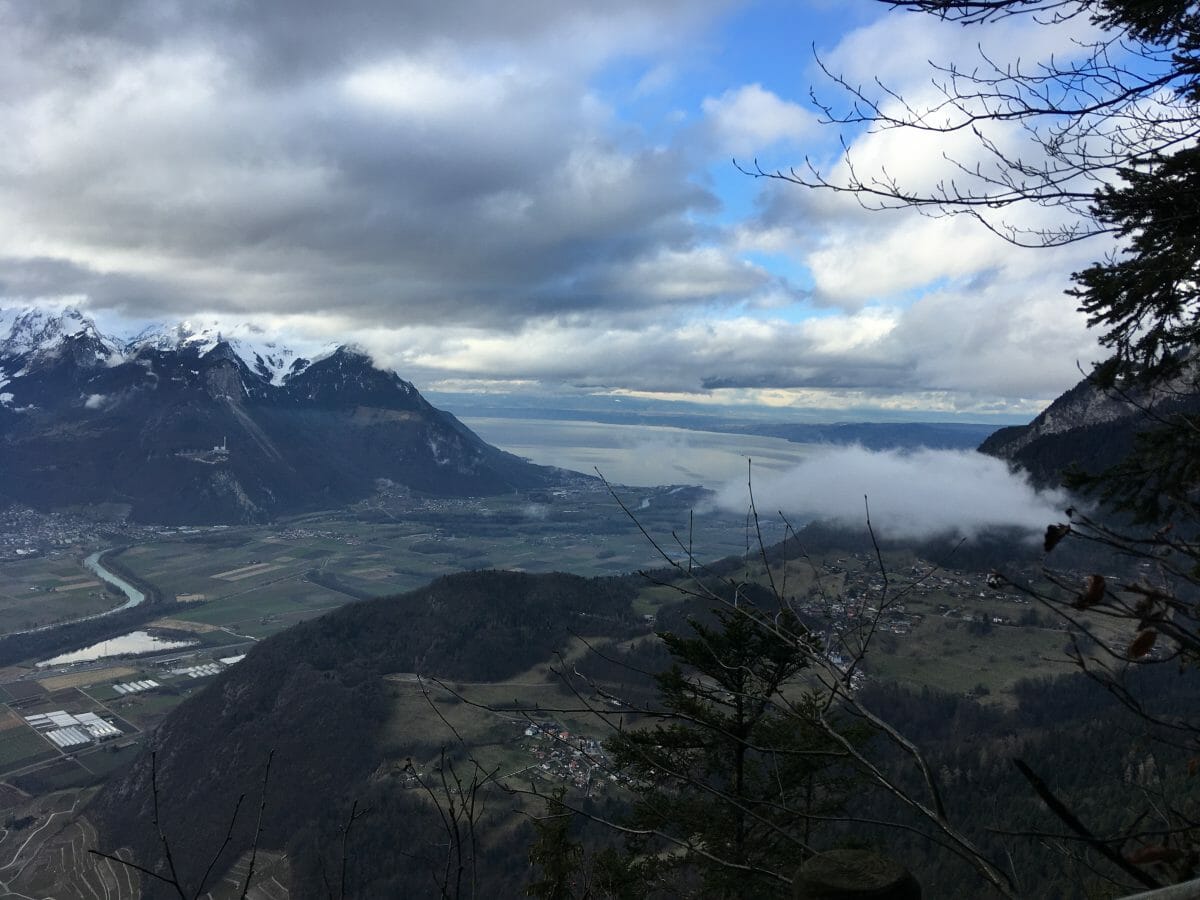 The descent via cog train is just as exhilarating as the ascent.  The tiny point of land extending behind the beginning of the shoulder of the ascending ridge is the French/Swiss border.  John III kayaked from Geneva to this point and spent 104 days climbing the precise Swiss border in its entirety.  He broke both feet in the process–but nevertheless continued on crutches and braces in his kayak during the recovery process.  It’s all in his upcoming book!