In Veresa Italy this year I am invited to give a short presentation about my 1899 Tugboat, Katahdin.  This is a rare treat as I’m quite near by in France so it’s a hop through Marsailles, Nice and Milan where I meet up with Bruno Cianci, a maritime writer and historian.  An adventure within an adventure is about to begin. 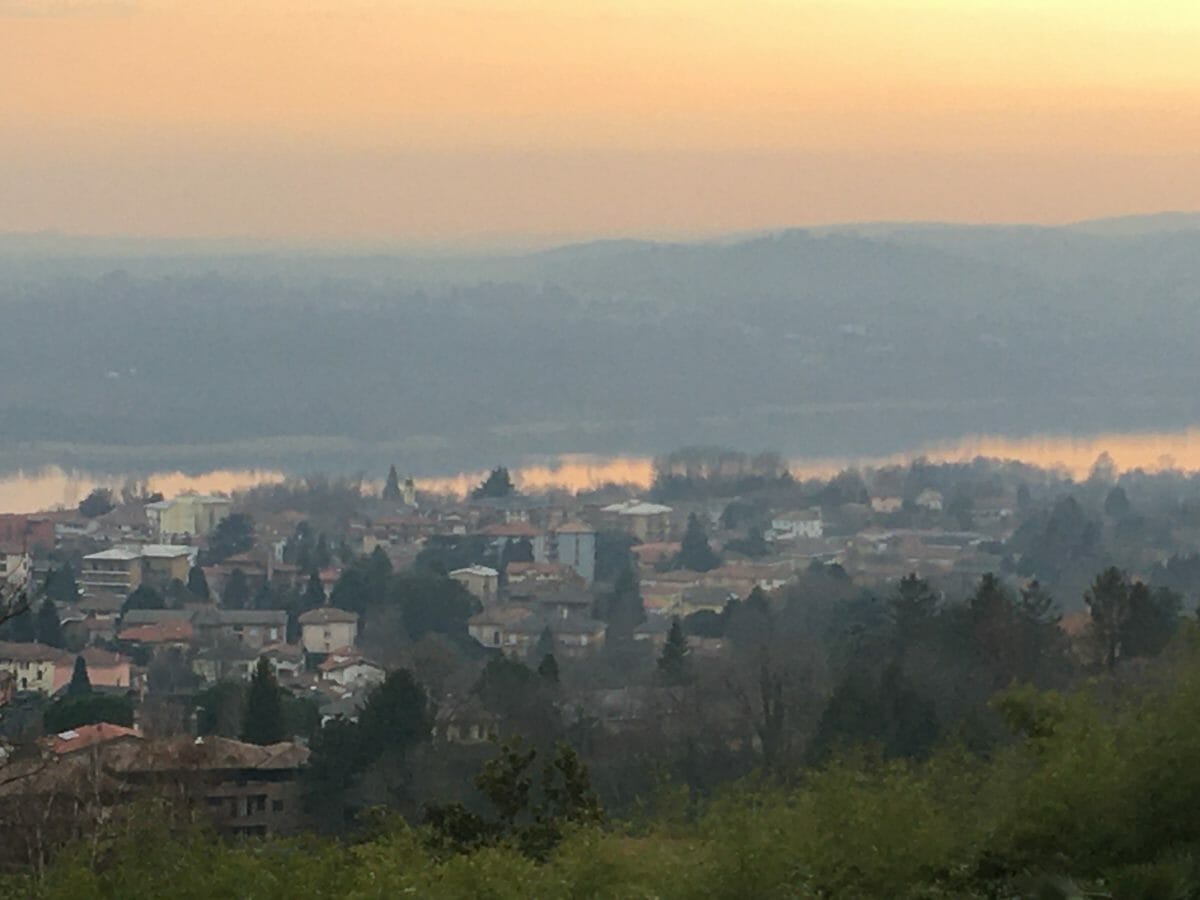 Northern Italy epitomizes the European vacation so start here.  The food and people are great and need no boost from me.  I get a special rate at the Grand Palace Hotel which is on top of everything–the Lago di Varese lies to the south as seen from my hotel room. 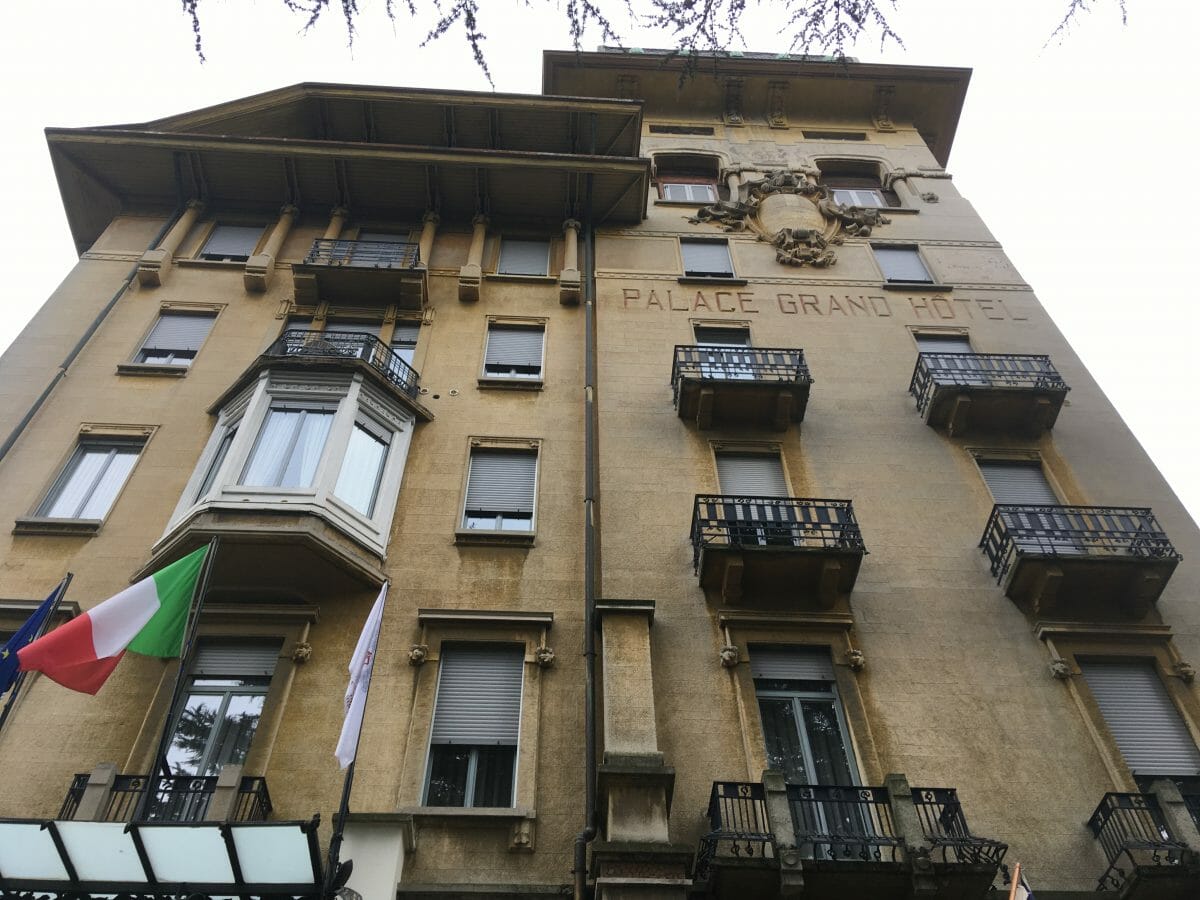 I’m on the third floor which is really the fourth in Europe.  The normal rates are up to $500E/night but my room was about $60E due to the convention. The food was excellent–the conference hosted a large luncheon after my talk and I ate about two lunches–thinking the plates of antipasto was the whole deal–wrong–I then was served up a hot main course and then my hosts began serving wine.  I can’t can’t keep up with Italians as I usually don’t eat lunch.   I could have stayed all week. 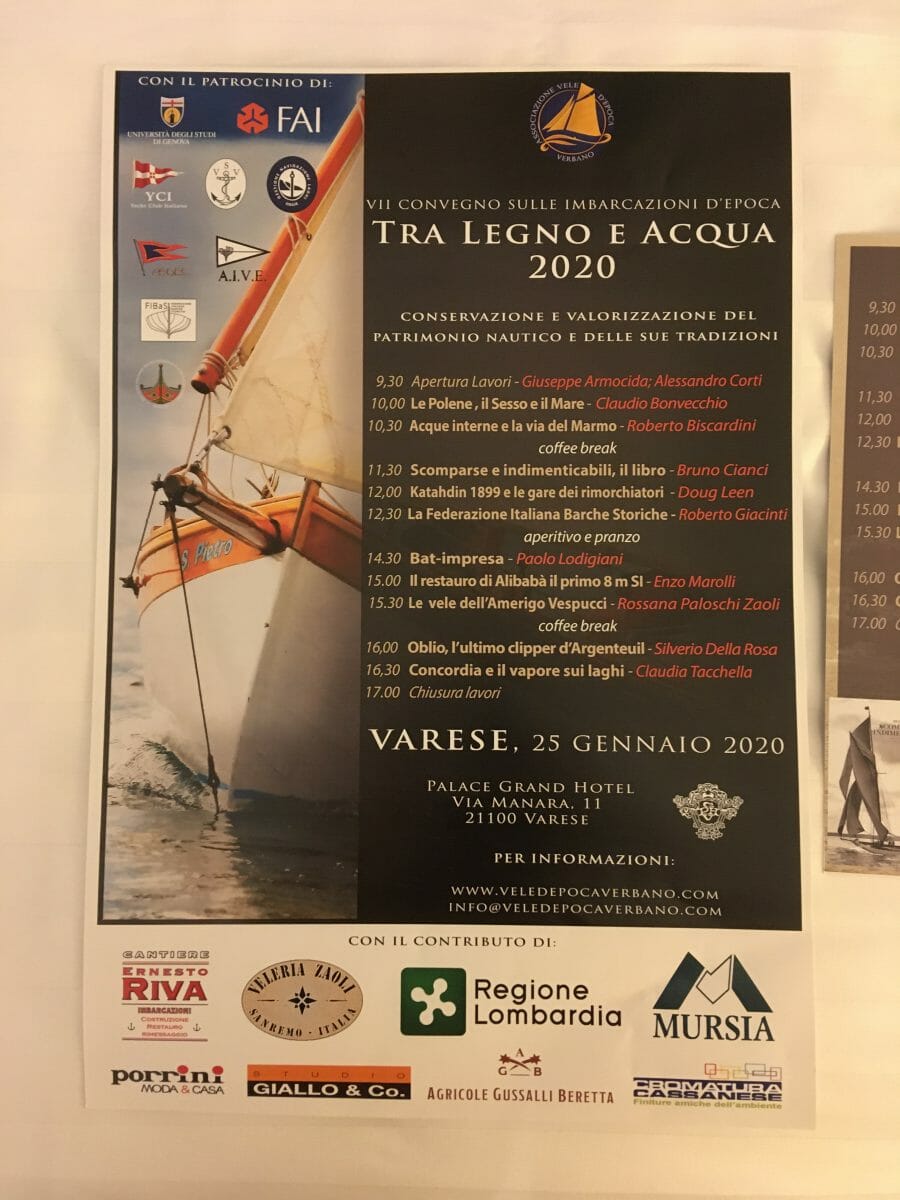 Here’s the program.  Bruno, who proceeds me, just wrote a book:  Scomparse e Indimenticabili” which means “Disappeared and unforgettable;”  describing the schooners that have sunk but are not forgotten.  These boats are the Stradivarius of their time and Bruno does a masterful job with his book.  My talk about the second restoration of the Katahdin was surprisingly quite popular with several questions after and a host of new Facebook followers.  Italians know how to enjoy life; read on, because it gets better….. 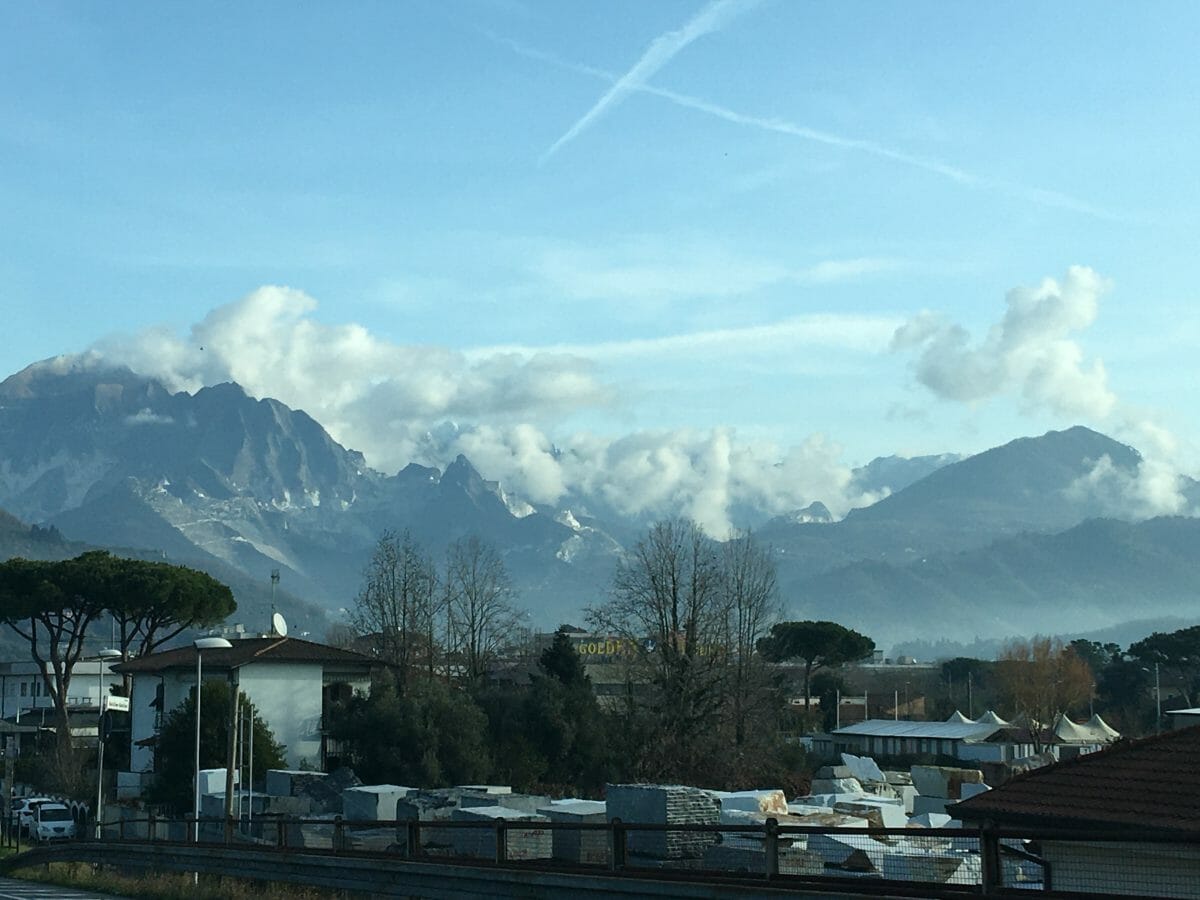 I’m invited to Bruno’s father’s home in Bocca di Magra which is an enchanting fishing town about two hours south of Milan.  Adjacent are the huge Carrara limestone (marble) quarries that were featured in Nat Geo a few years ago (turns out it was 1982!–I’m getting old!).  This quarry is where Michelangelo and the others (there are lots!) got their materials and likely you did too–with your bathroom floors.  The proportions are staggering and will deserve another trip just to tour these quarries.  My host, Angelo Cianci is what I call the “Salt of the Earth” and couldn’t do enough for me as his guest.  He insisted on cooking up his fish dinners for Bruno and I and brought out the best of everything–including tours around the area. 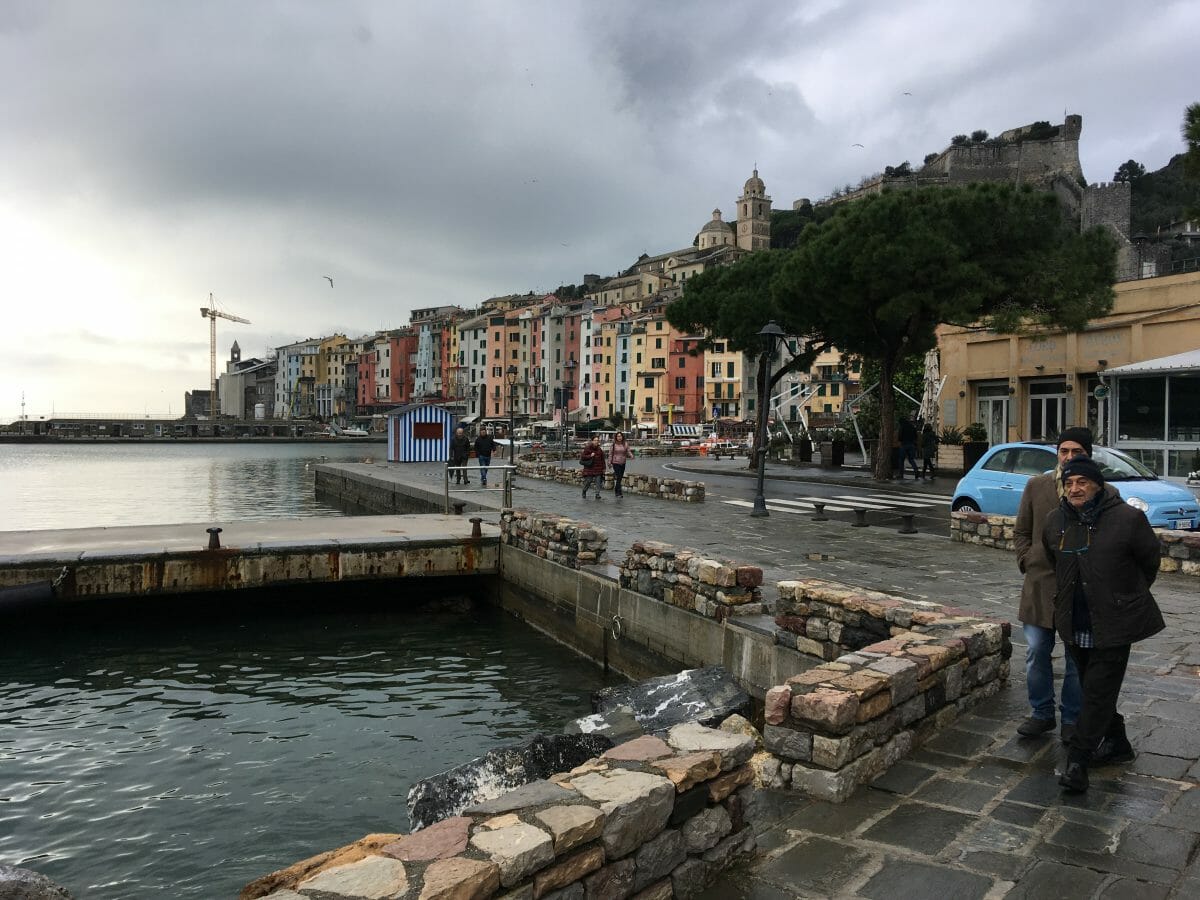 Meet Angelo and Bruno here on the quay near La Spezia (The Spy), a beautiful cove city just north of Bocca di Magra.  I met Bruno last summer on the BC Coast where he was covering maritime events as I drove the Katahdin down the coast.  He lives in Istanbul with his Turkish wife and five year old daughter.  I’ve always wanted to visit this great city so this is my winter plan…..except I get side-tracked a bit. 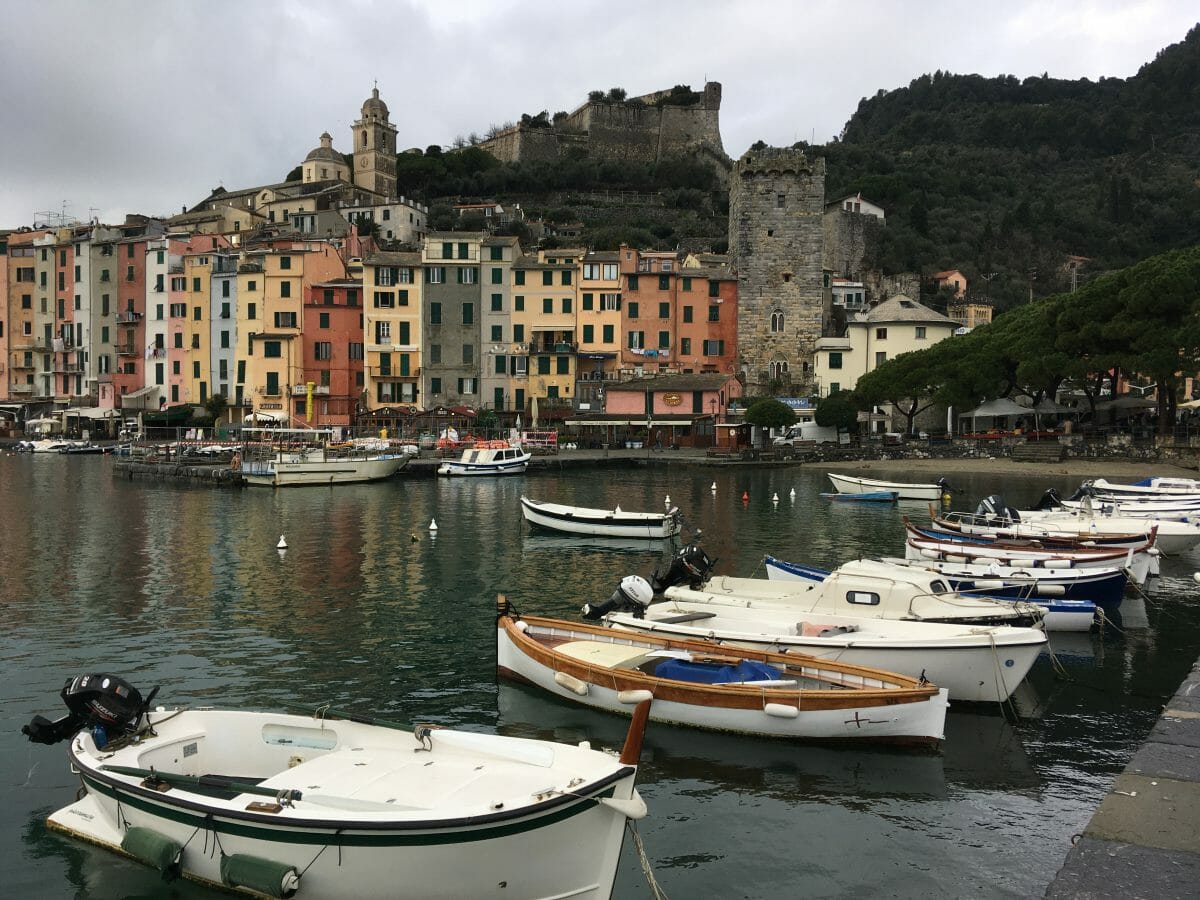 Waterfront are interesting places around the world and La Spezia is not an exception. 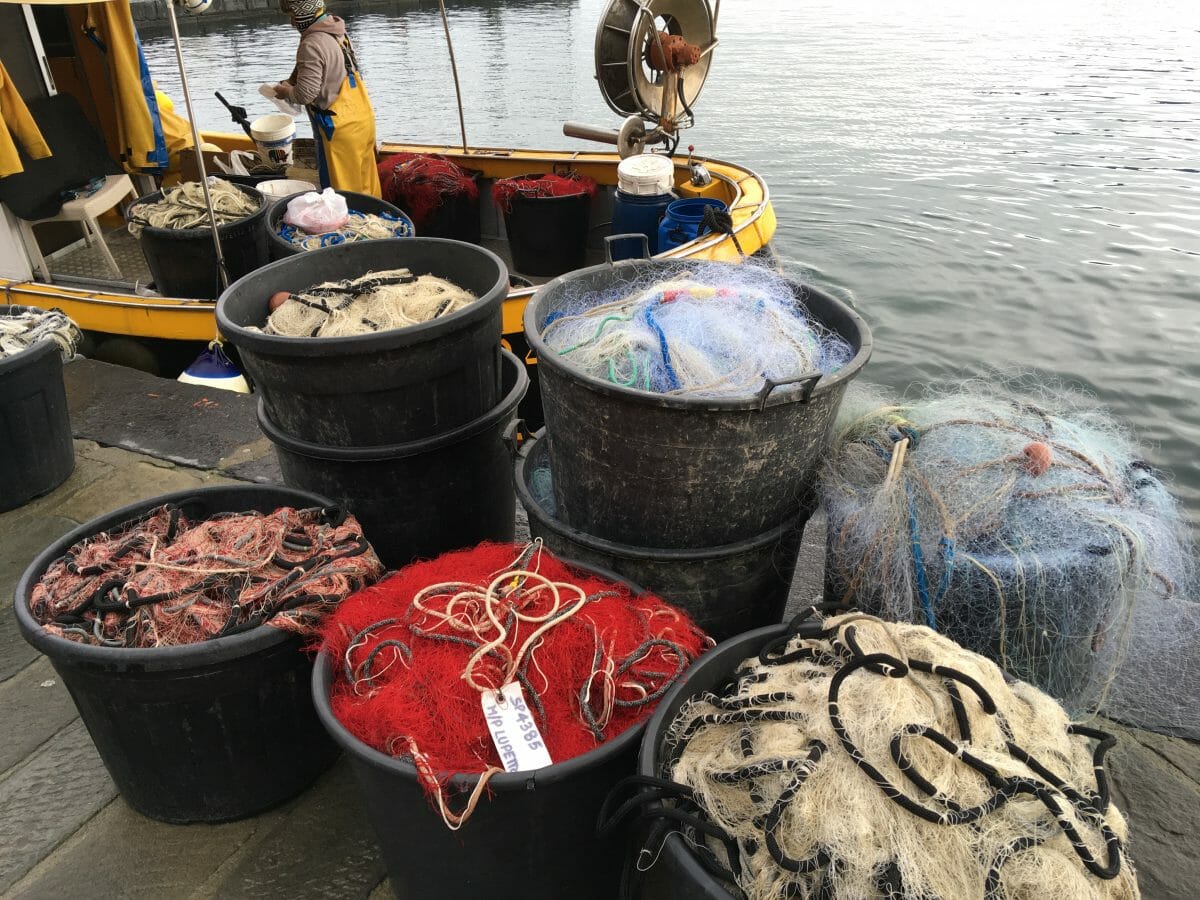 Some of the local color stored in tubs.  Angelo stopped to chat with the fisherwoman and her husband who weren’t having a good day fishing. 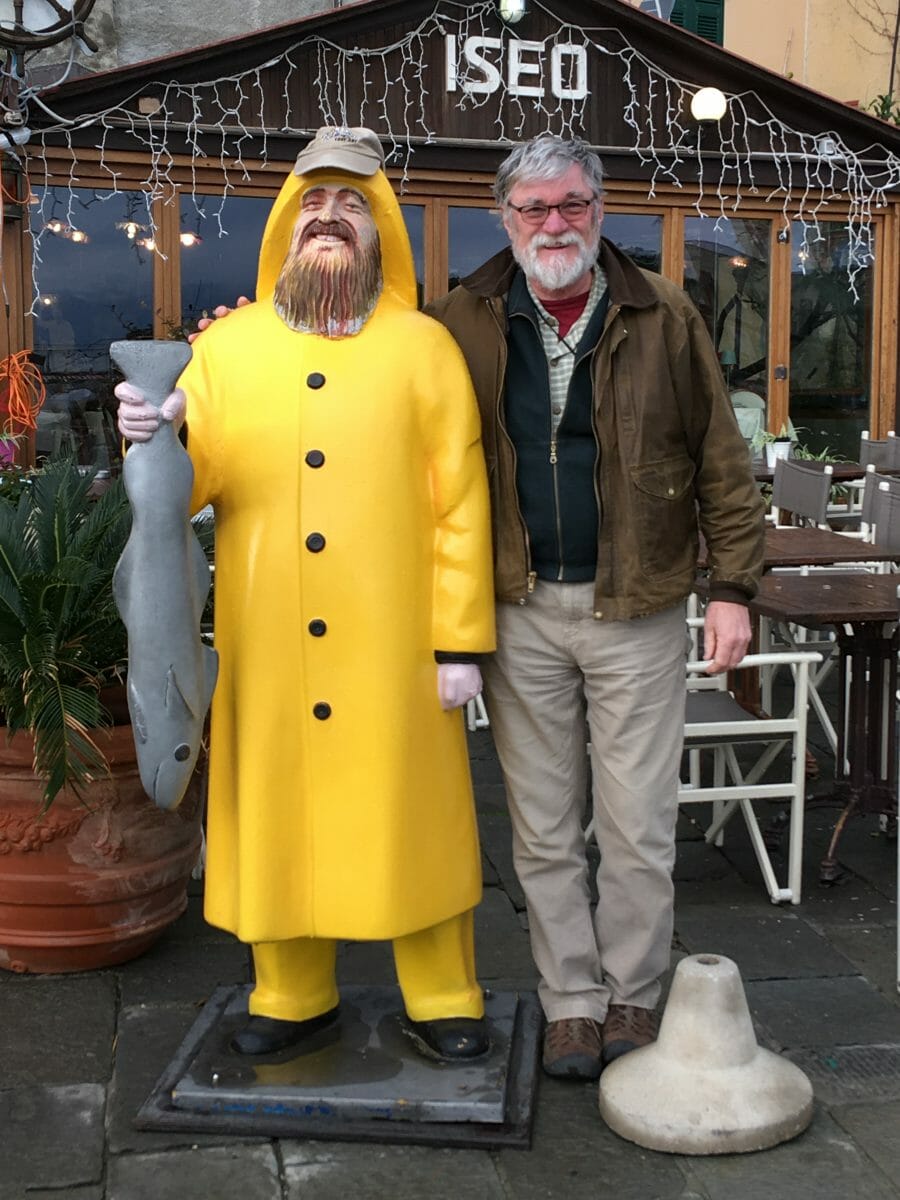 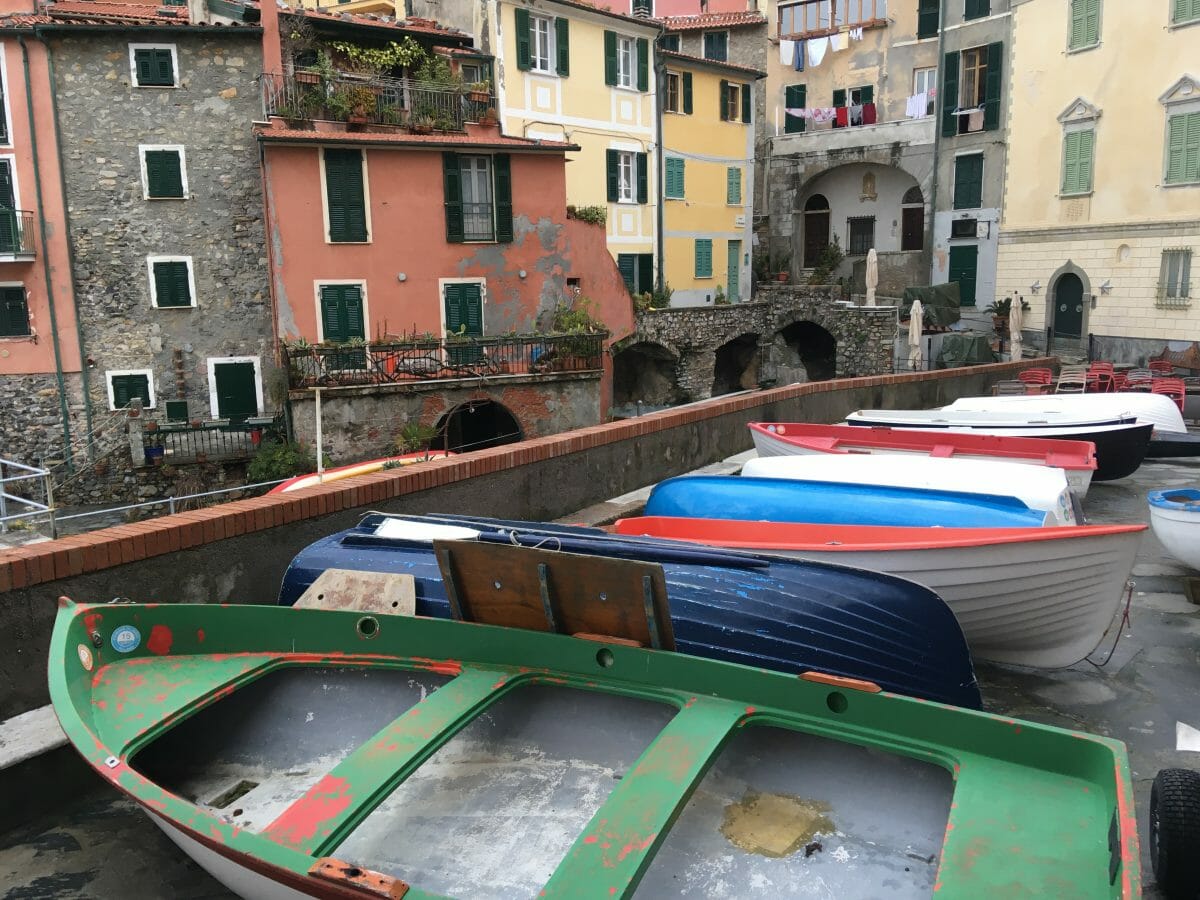 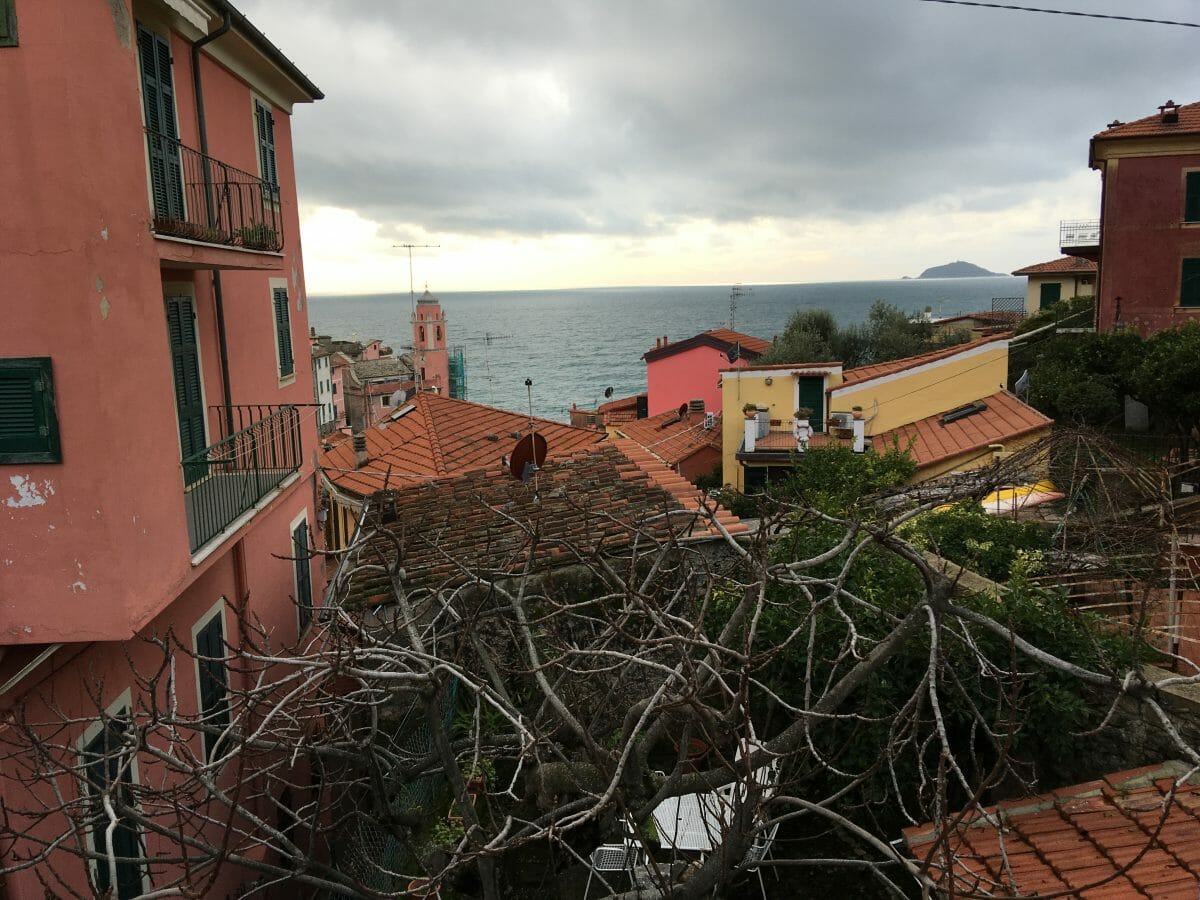 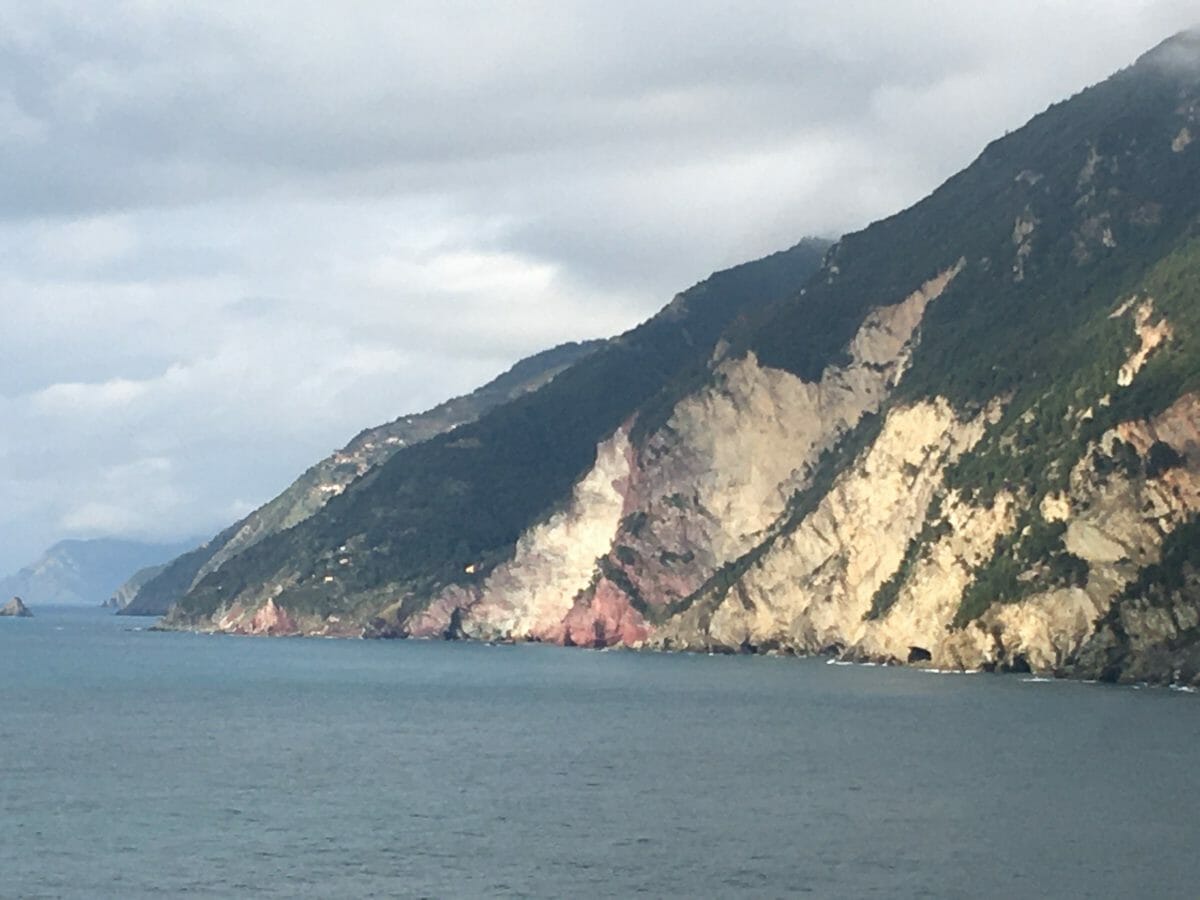 On the very tip of the peninsula beyond La Spezia the there is a quaint church and beyond the coastline stretches out with a colorful palette right out of Thomas Moran’s Yellowstone Falls painting.  The geology is similar. 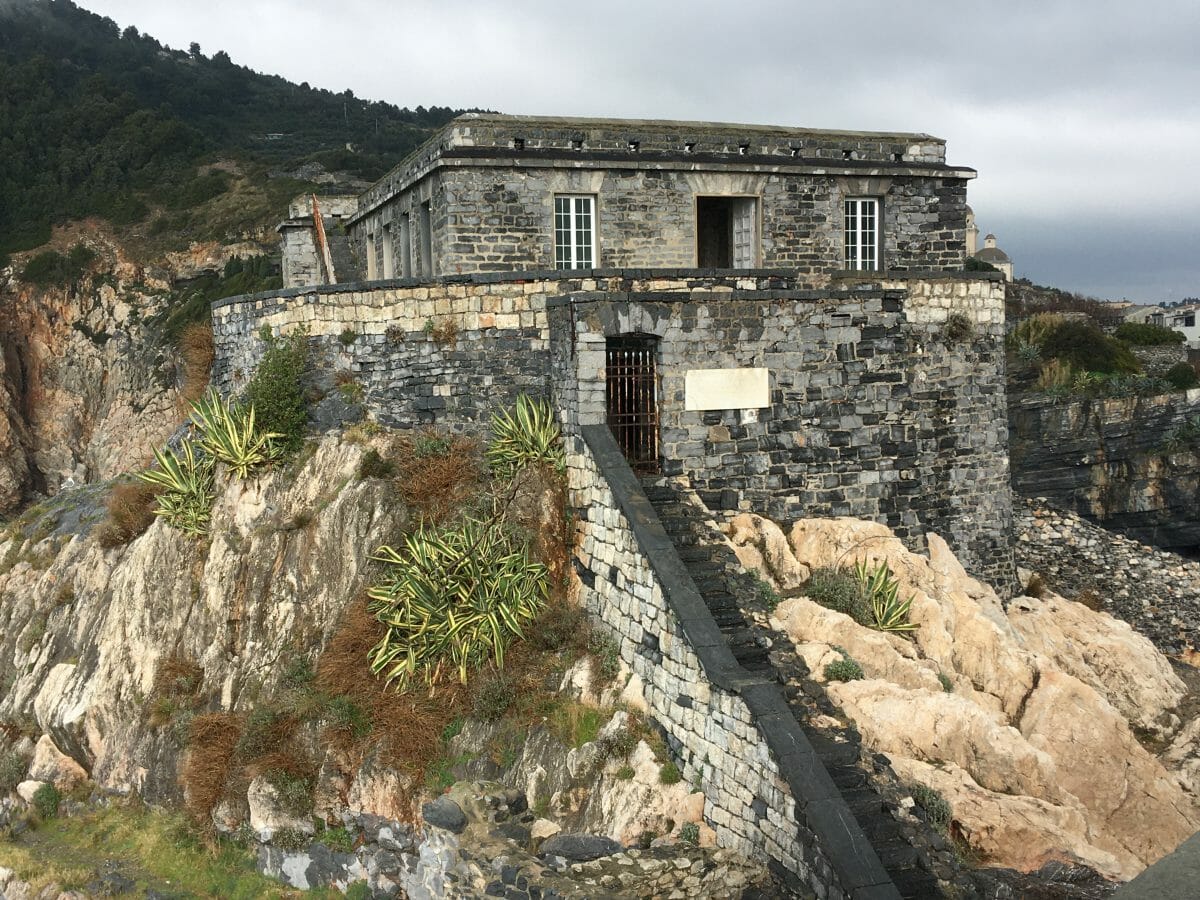 This is not the church but is part of the complex.  For those who don’t like stone stacking, Italy is not the place for you to visit.  There are dry stacked (and mortared) walls everywhere.  I have mixed feelings about stone stacking.  Some claim it’s detrimental to the environment…..not sure but perhaps in some places.  The next day we visit some more stacked stonework….. 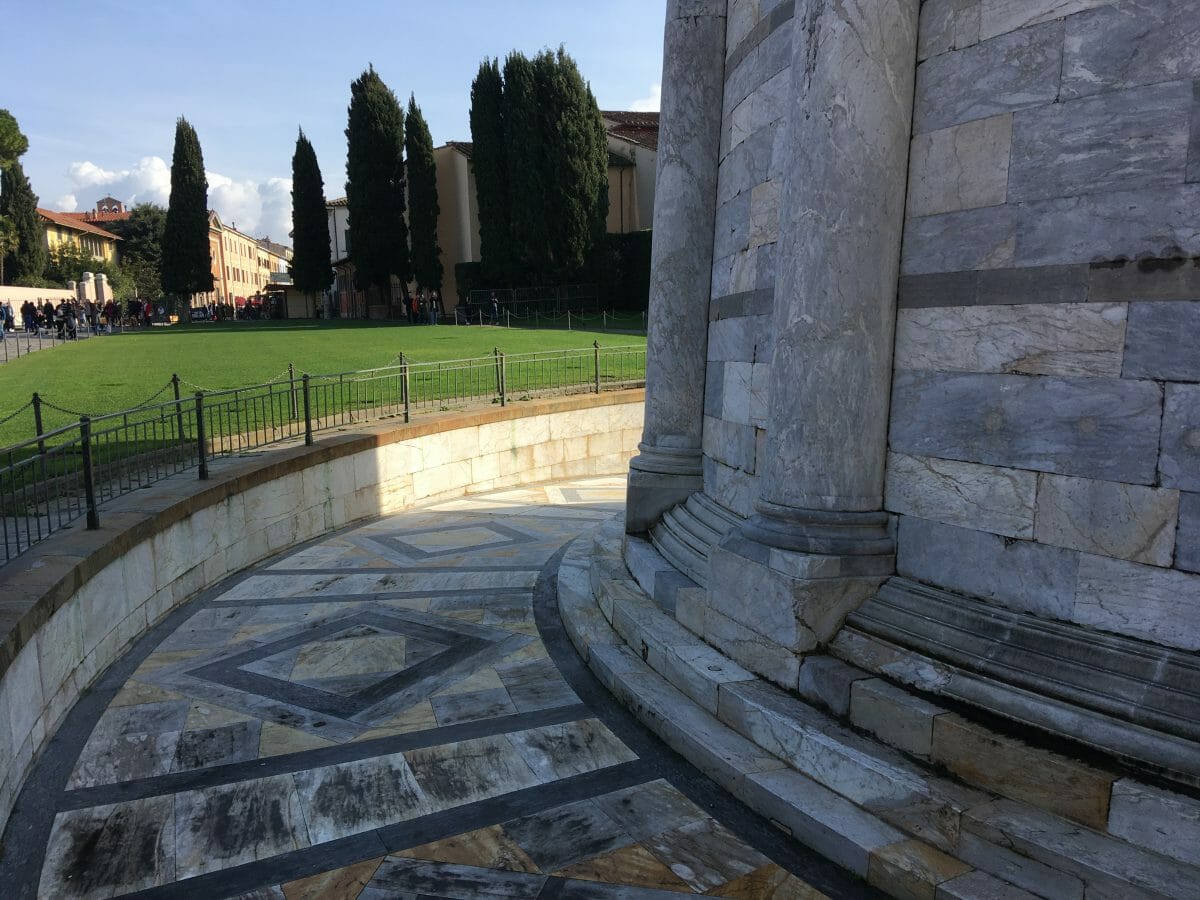 Here’s a building everyone knows–stacked stones again and stones are heavy.  Here on one side of the foundation the plaza is two stone courses below grade…… 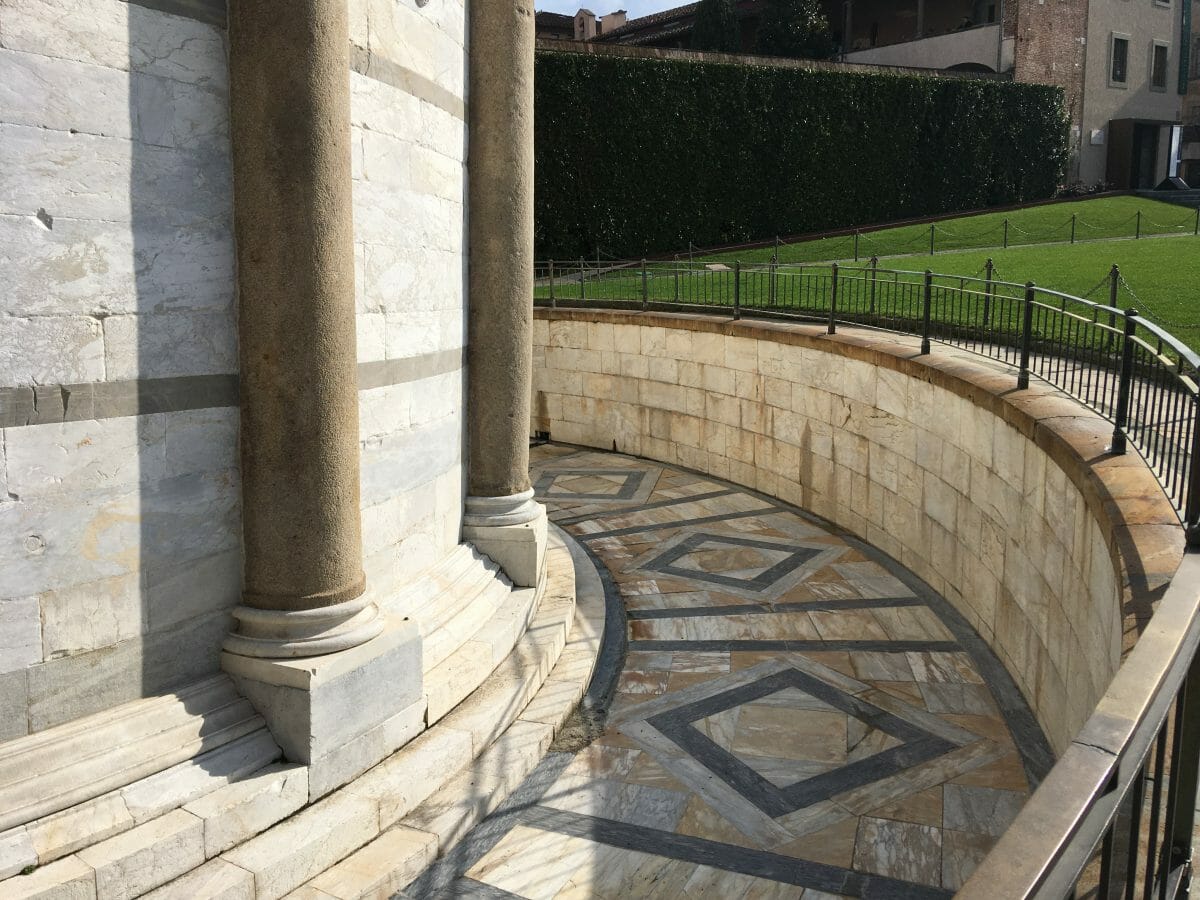 And on the other side it is almost six. 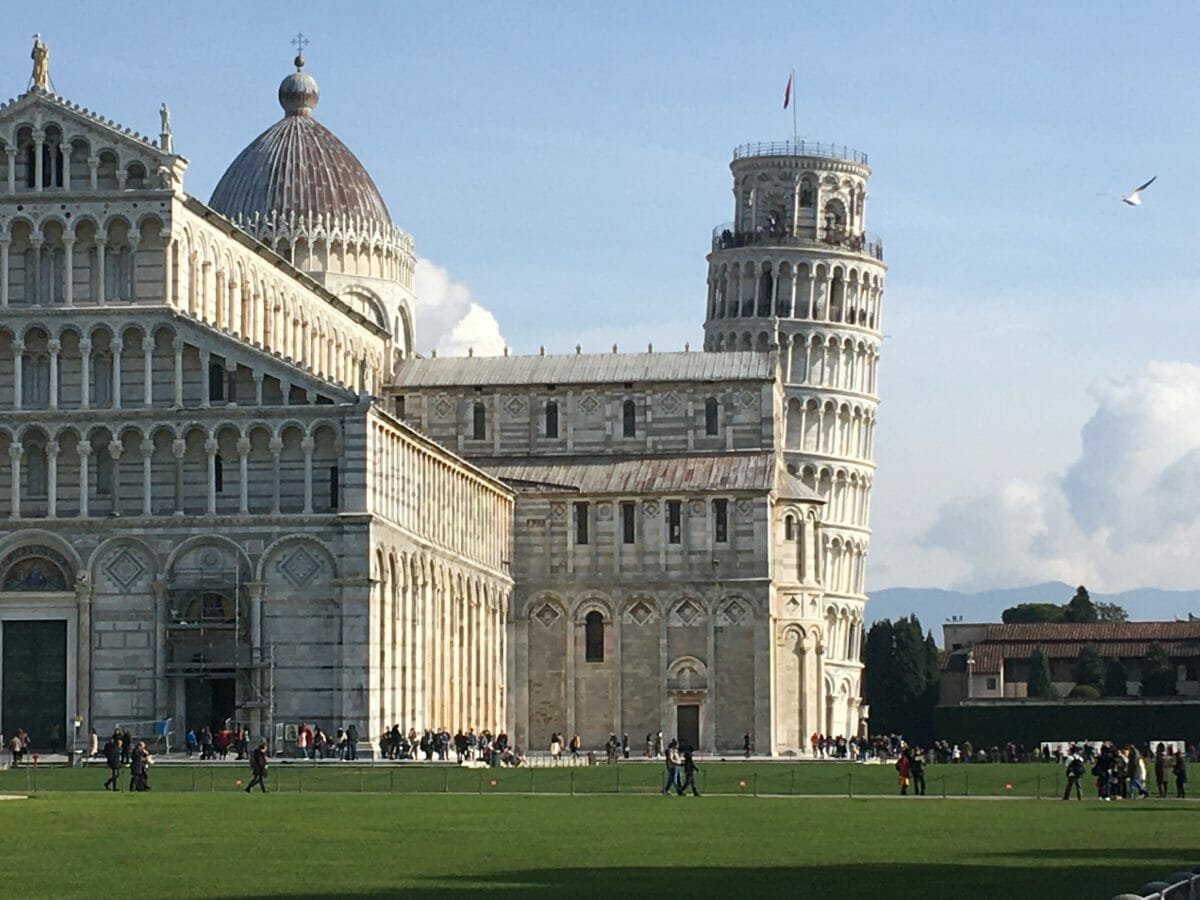 Of course, this is the Leaning Tower of Pisa.  Not only does it lean, but it is not straight.  During the building process–which took two hundred years–it became apparent that the foundation was failing so they corrected the angle gradually as they built skyward.  The actual shape resembles an elephant tusk: 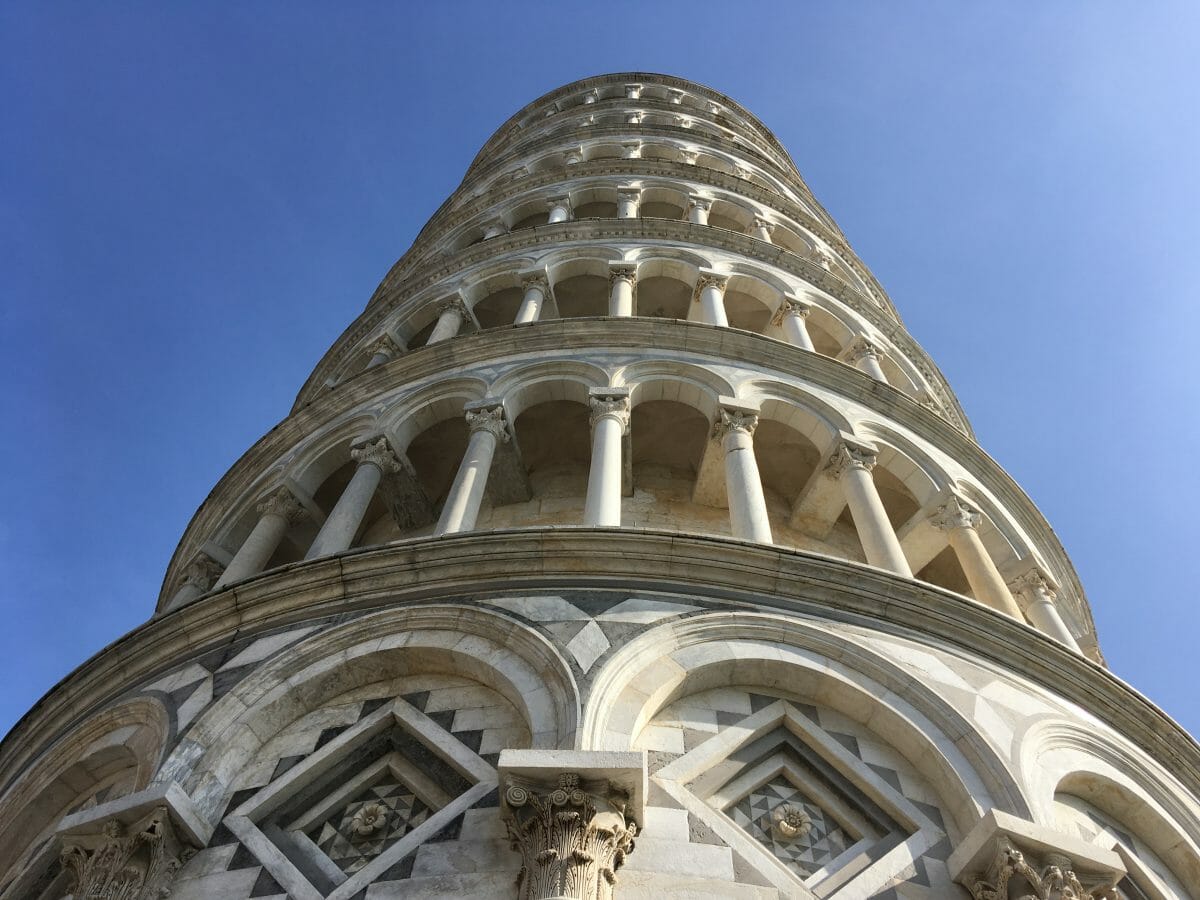 I would have fired the contractors.  However, if this tower didn’t lean, frankly, it would be just another tower.  It was designed to hang a bell next to the church and the problems in this area don’t stop with the bell tower either….. 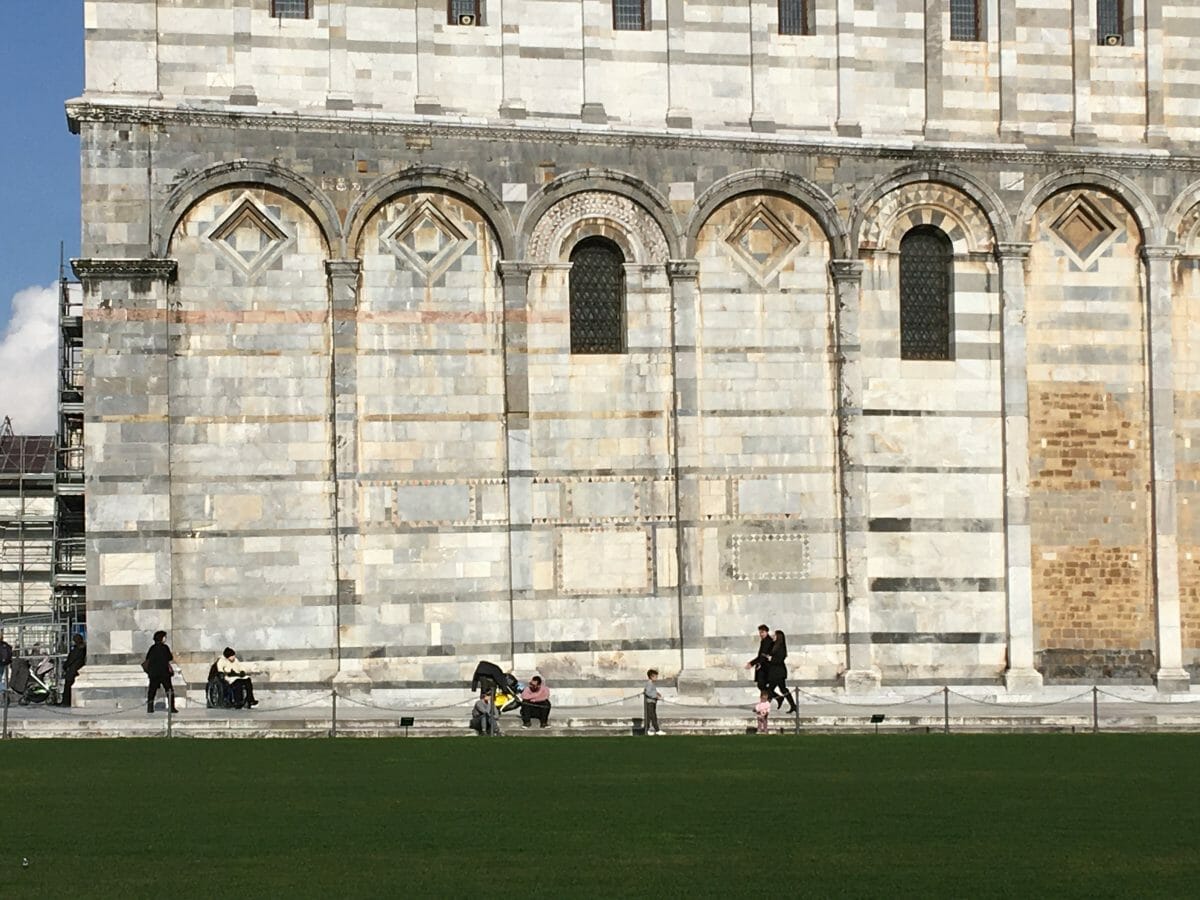 This is the adjacent church and there isn’t a straight line in this structure.  Last winter I worked in Petrified Forest and the entire park headquarters was built on bentonite which is a spongy type rock that expands when it gets wet–cracking the entire complex.  The geology here on Pisa’s plain is likely similar.  Modern day engineers have corrected the lean by about 1/2 a degree I’m told.  But they can’t tilt it too much further or it will lean the other way–due to the bent shape…..  Leave everything alone and perhaps in another 1000 years it will collapse. 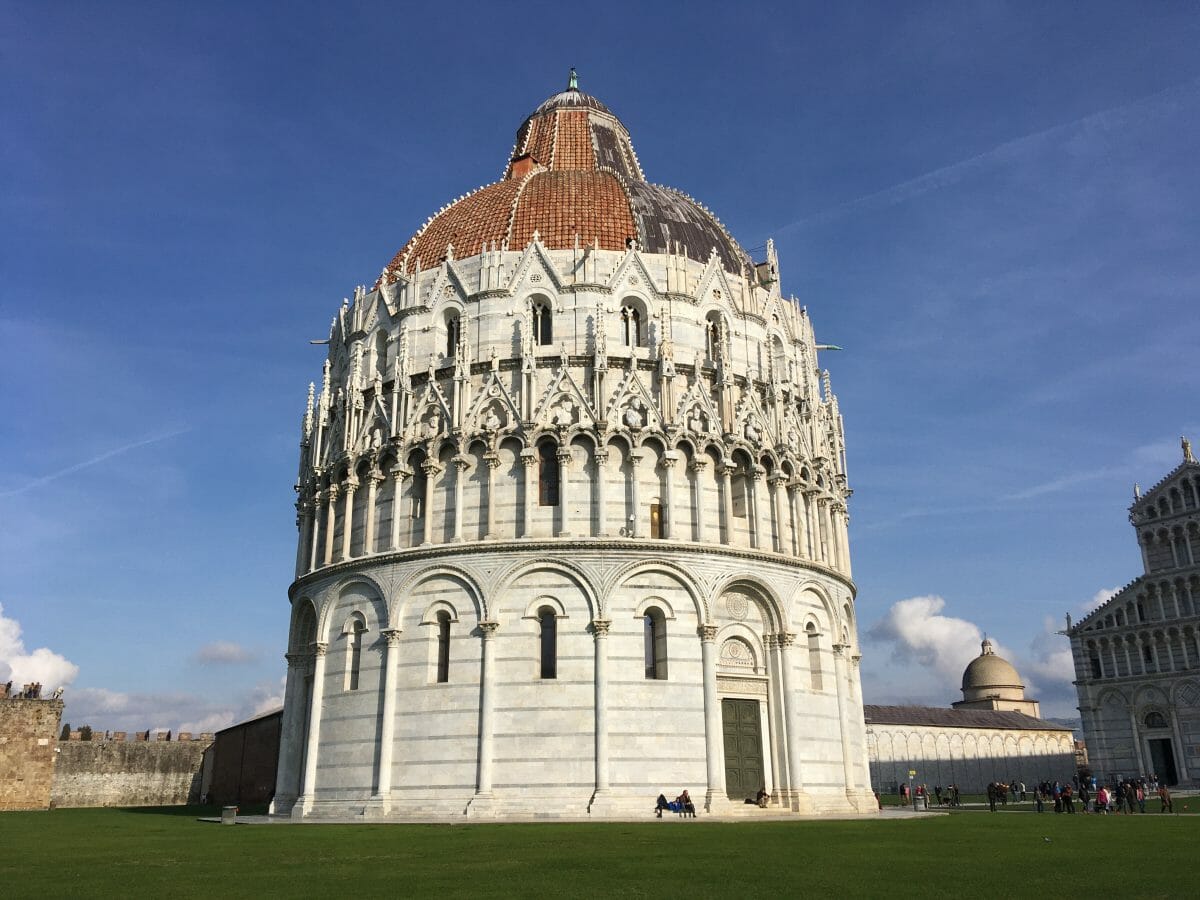 They did a pretty good job on this building–the third in this Pisa complex.  This whole area lies within a pretty big city now with the Arno River winding through.  Too short a visit. 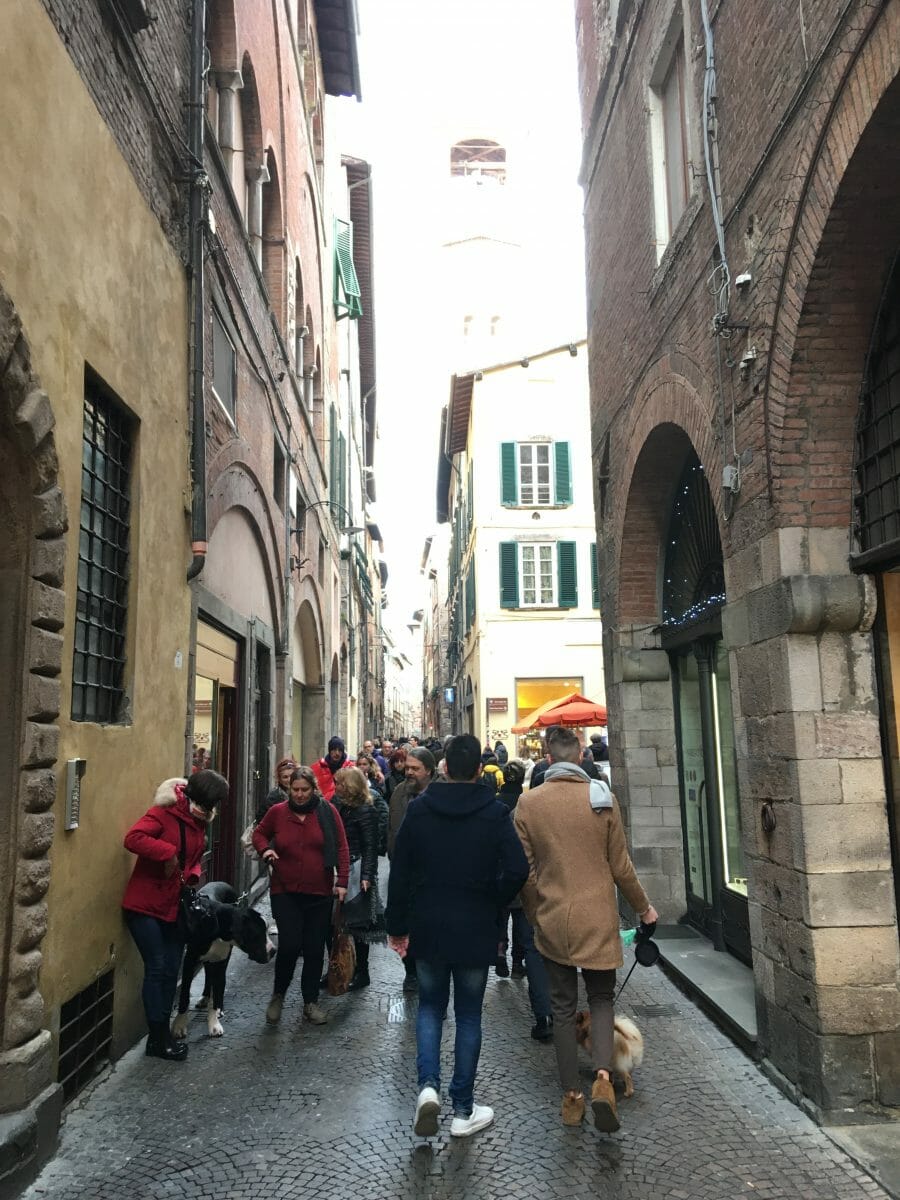 After Pisa, it’s on to Lucca which is worth the visit.  Lucca is an old walled city, like most renaissance Italian towns, however this is still fully intact.  It was founded by the Etruscans well before the Roman Empire, however was “liberated” by the Romands in 180 BC and later Julius Caesar, Pompey, and Crassus formed the First Triumvirate in Lucca in 56 BC.  It went on to become famous during the silk trade rivaling Byzantium (Istanbul–my next stop). 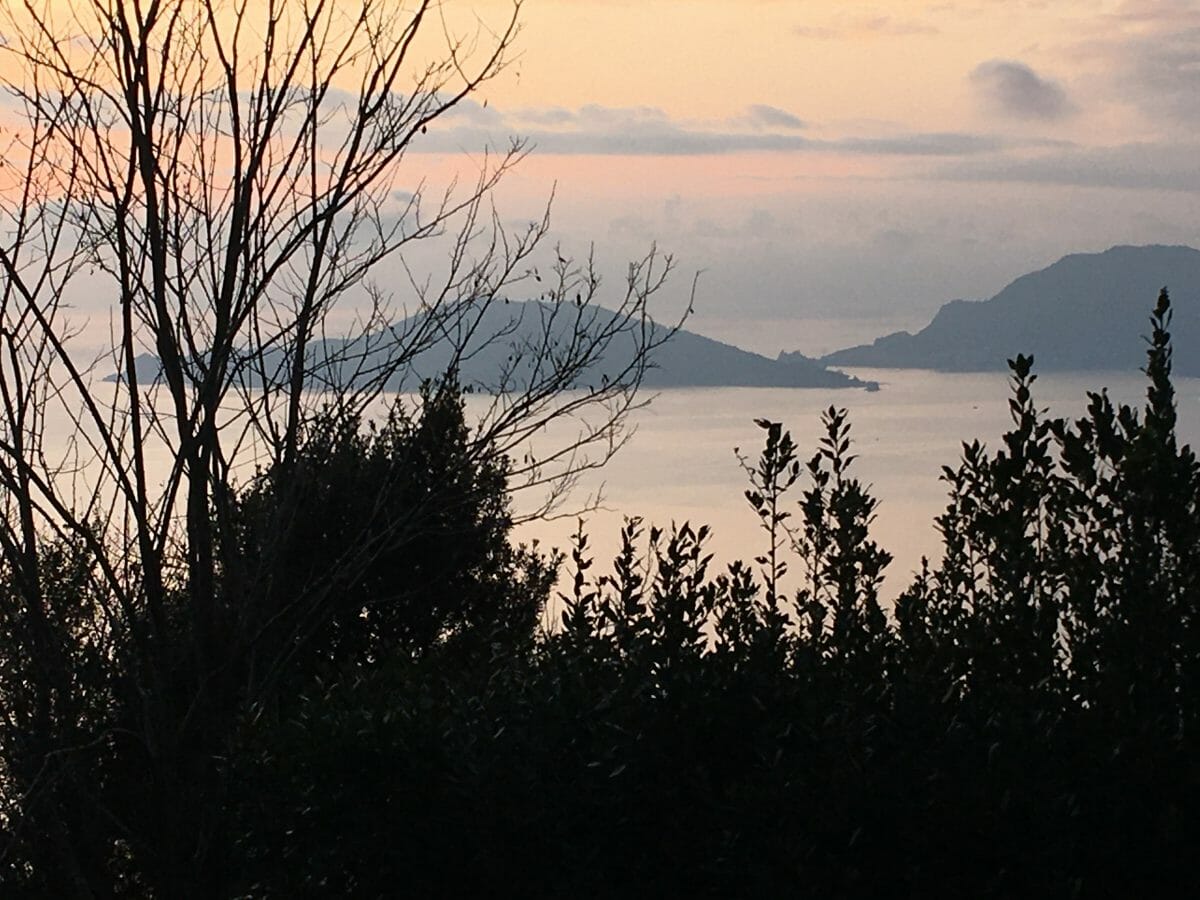 Time to train southward toward Rome…   Thank you Angelo for being such a wonderful host!