Toronto has this big tower–huge–about three times taller than the Space Needle and unlike the Space Needle, this one will be hard to climb.  They want $30 bucks to ride up the elevators and denied me access to the stairway when I asked, so I decided to forego the visit and spend my money on a good bottle of French Bordeaux when I get there.  This tower can be seen from all over the area and was once the planet’s tallest tower; not to be confused with buildings. 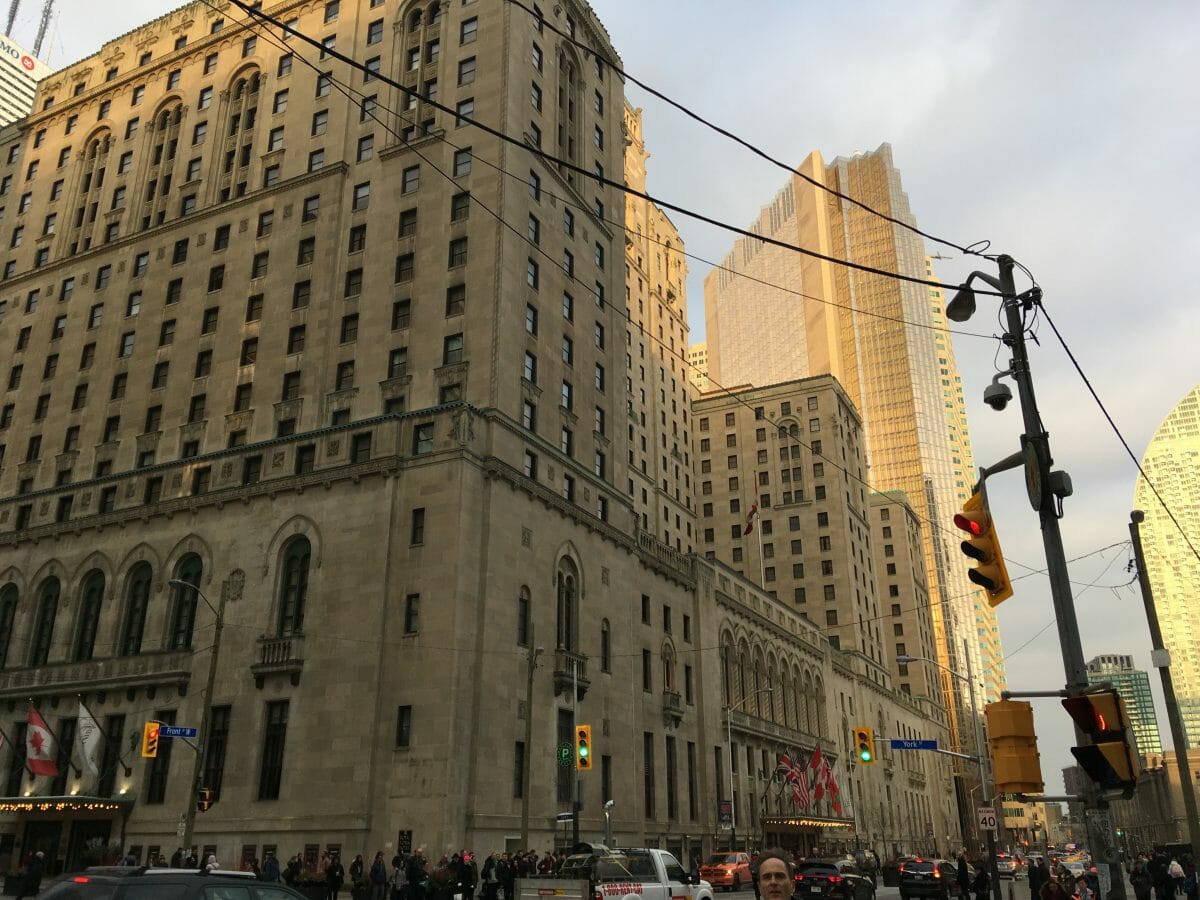 My hotel is right across from the train station and looks about as massive.  The Fairmont Royal York is truly a cushy place and Expedia can get you a room for $123/night.  However…..after taxes and a mandatory “incidental coverage charge” my credit card took on a $600 burden.  I’ve a few hours of daylight my first day of arrival so I instinctively head for the waterfront. 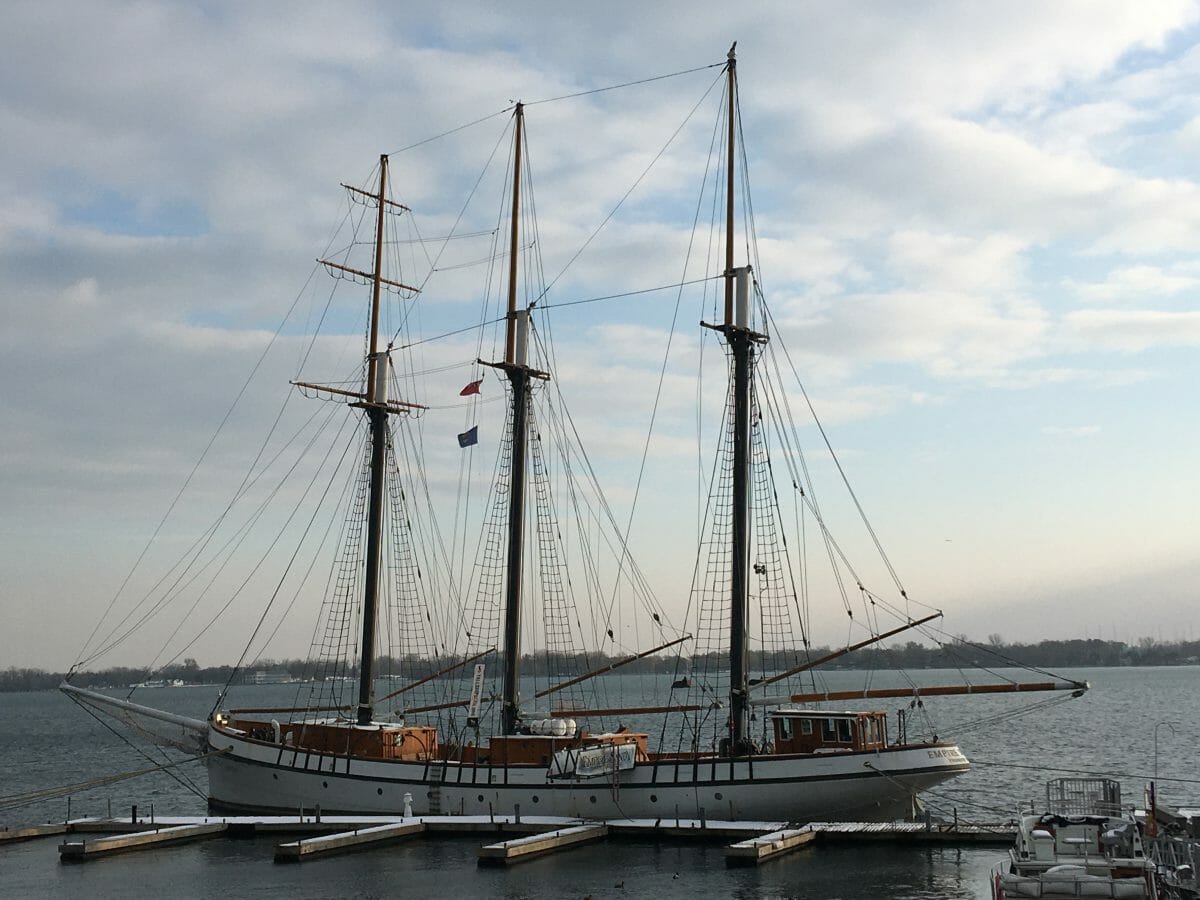 Which doesn’t disappoint.  Here is the Empire Sandy a triple. masted schooner.   Toronto airport lies to the right on Center Island (or Centre as they prefer) in the distance which creates a natural harbor for the cold winds blowing out of the north–about 15F today. 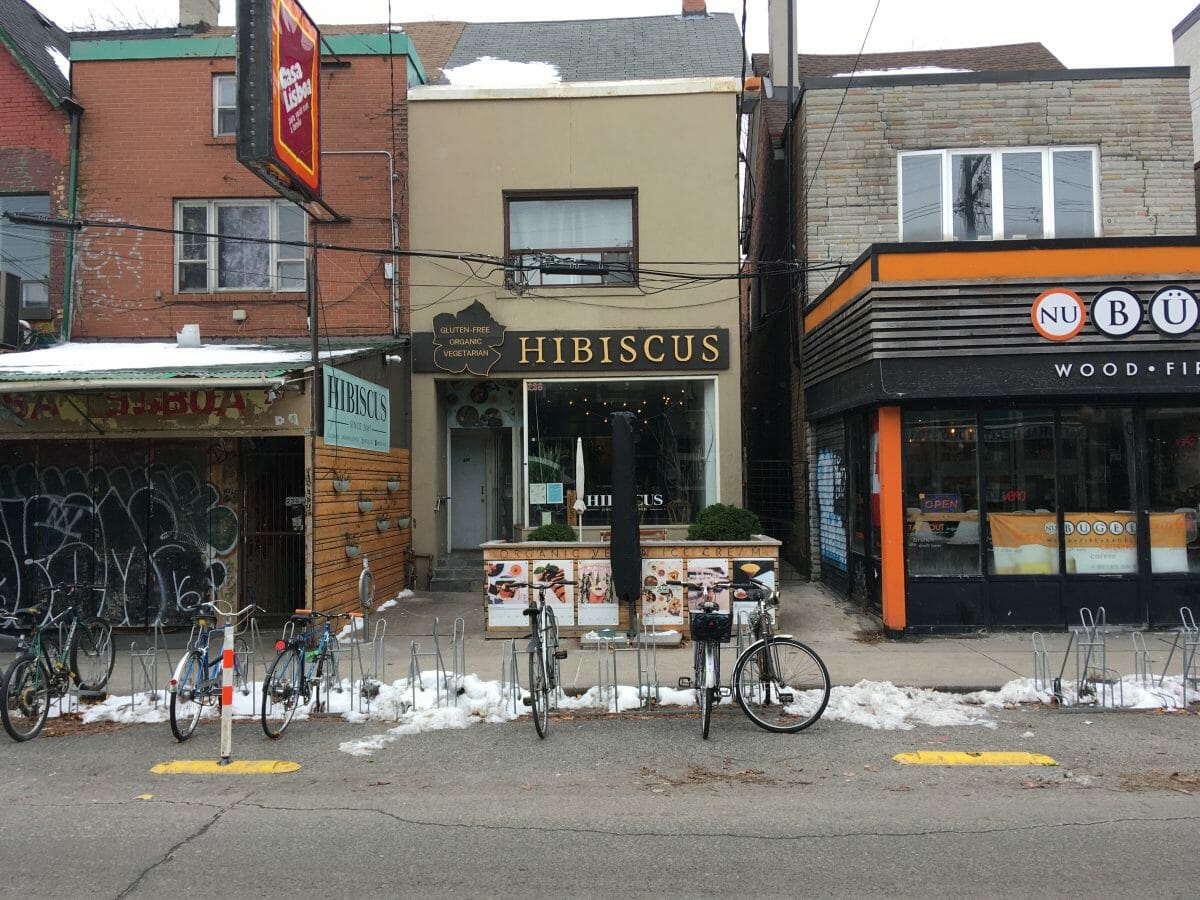 In the morning, it’s payback time for 5 days of inactivity on the VIA Rail so I prepare a good 5 mile walk–yet in 15F temps–to Chinatown and the Kensington Market–a bit of a disappointment.  Take Seattle’s Pike Place Market, add another bubble-gum wall of graffiti, broken bikes and eclectic shops.  I wasn’t too impressed so kept walking…… 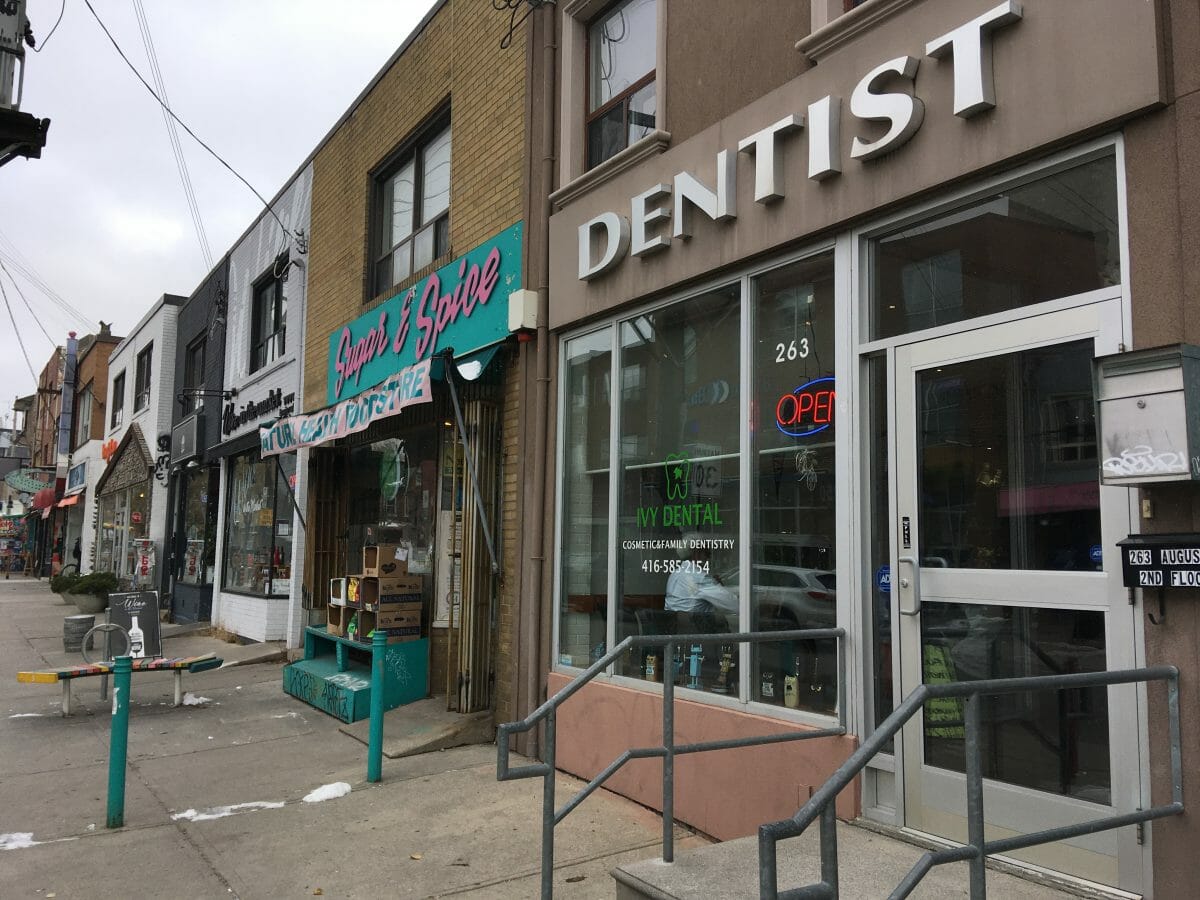 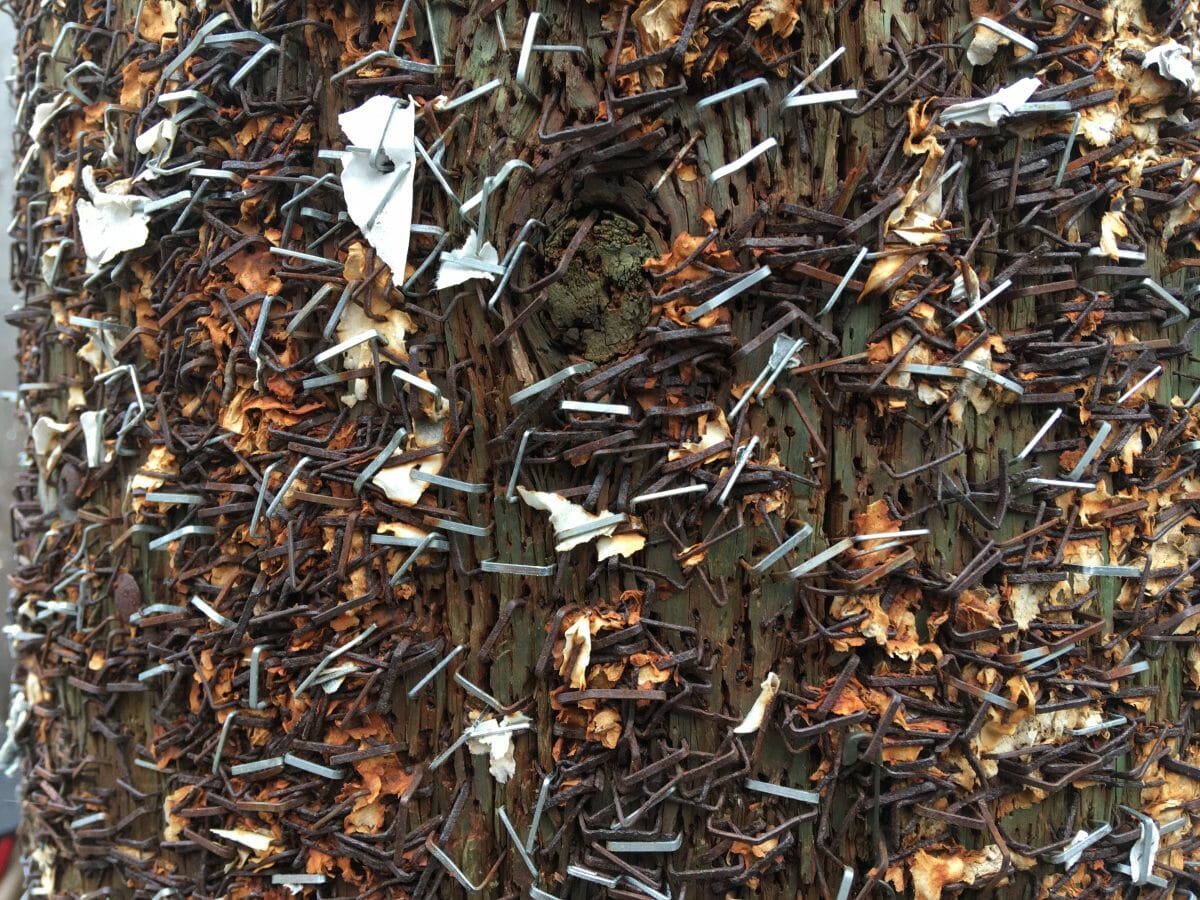 Imagine the flyers posted on this telephone pole.  Sort of a cross between Newspaper Rock and the padlocks on the Seine River bridges in Paris….. 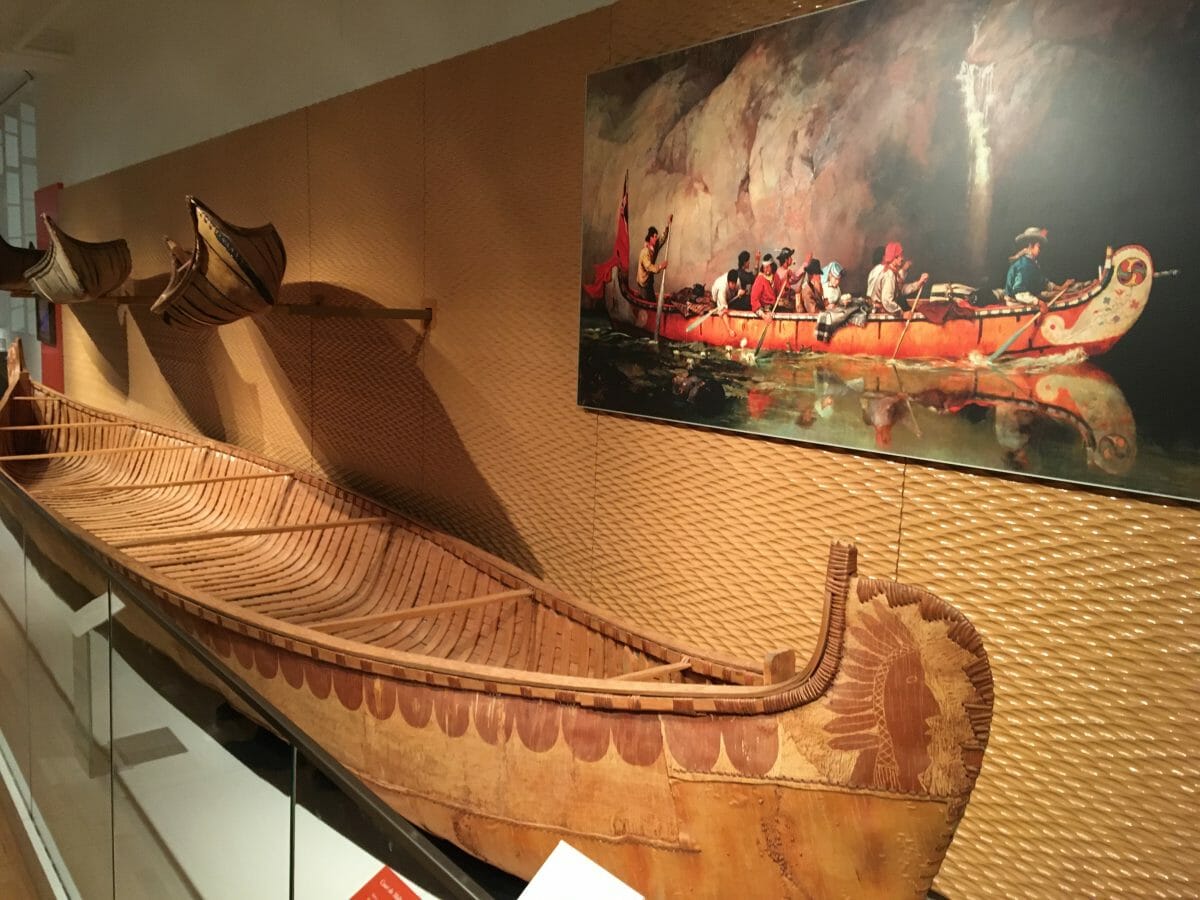 It’s on to the museum–the ROM or Royal Ontario Museum.  I must say, this was the best museum I’ve been to in years and for only $18 bucks–about half the cost of the CN Tower elevator ride. I immediately signed up for a guided tour of their Japanese Edo exhibit which was superb as was the cultural wing which featured every Indian tribe coast to coast.  The Canadian’s treatment of the North American indigenous peoples was not any better than the US, although they did harbor Sitting Bull for a few years before banishing him back to the US where he was killed by an Indian Policeman–under the direction of US troops.  He was the Souix’s version of Ernest Shackleton, in a way.  I liked this freight canoe–a reconstruction of only four surviving canoes, two of which recently burned.  Also a wonderful meteorite collection including the one that was tested positive for amino acids–the perfect starting point for the excellent paleontology wing. 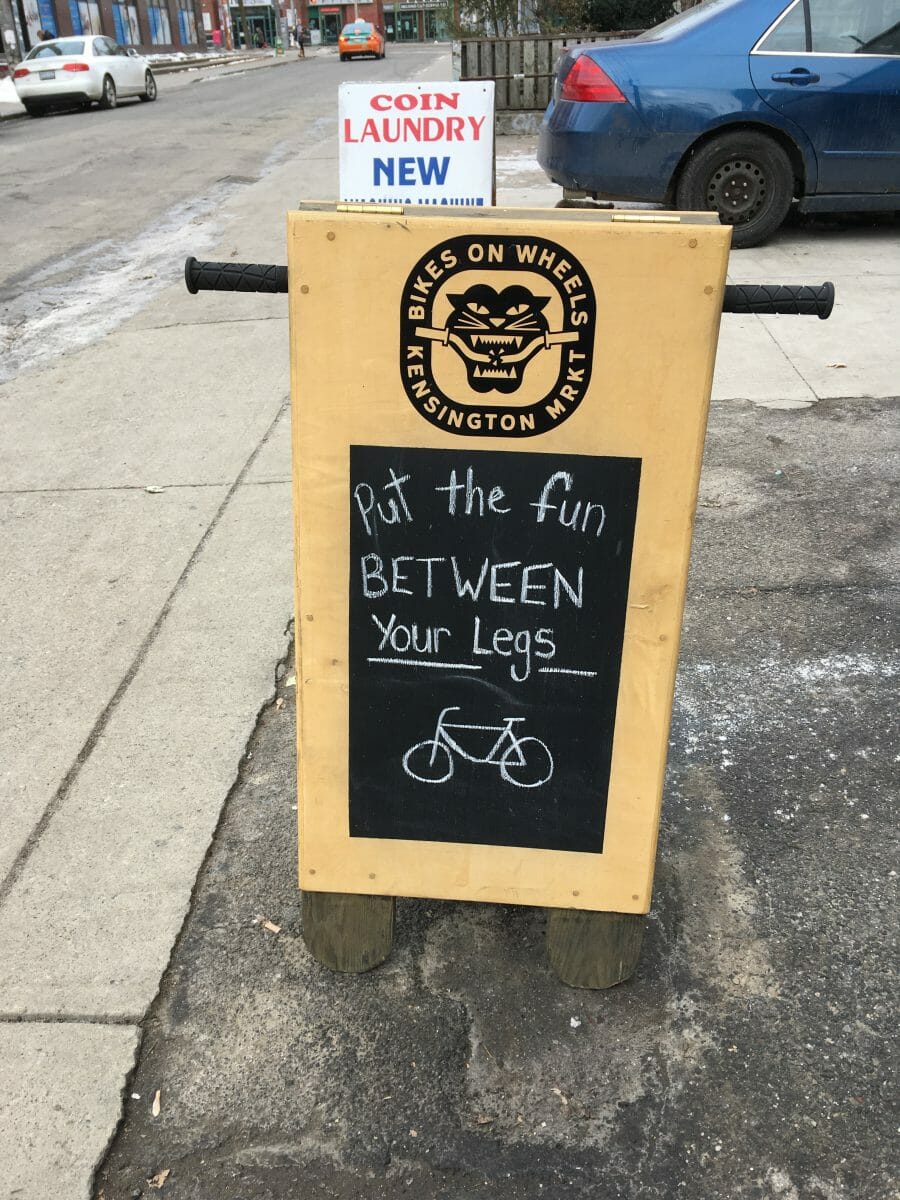 Walking back home to my hotel, I spotted this bicycle ad–one of  the best I’ve seen.