Cappadocia lies in central Turkey yet is surprisingly easy to access.  It’s a UNESCO World Heritage Site and was a National Park until Erdogan pulled its park status, calling it an “economic development and tourism zone” or some such thing–sound familiar?  Here’s a quick-link to it’s Wiki Page so I don’t have to parrot it all here. 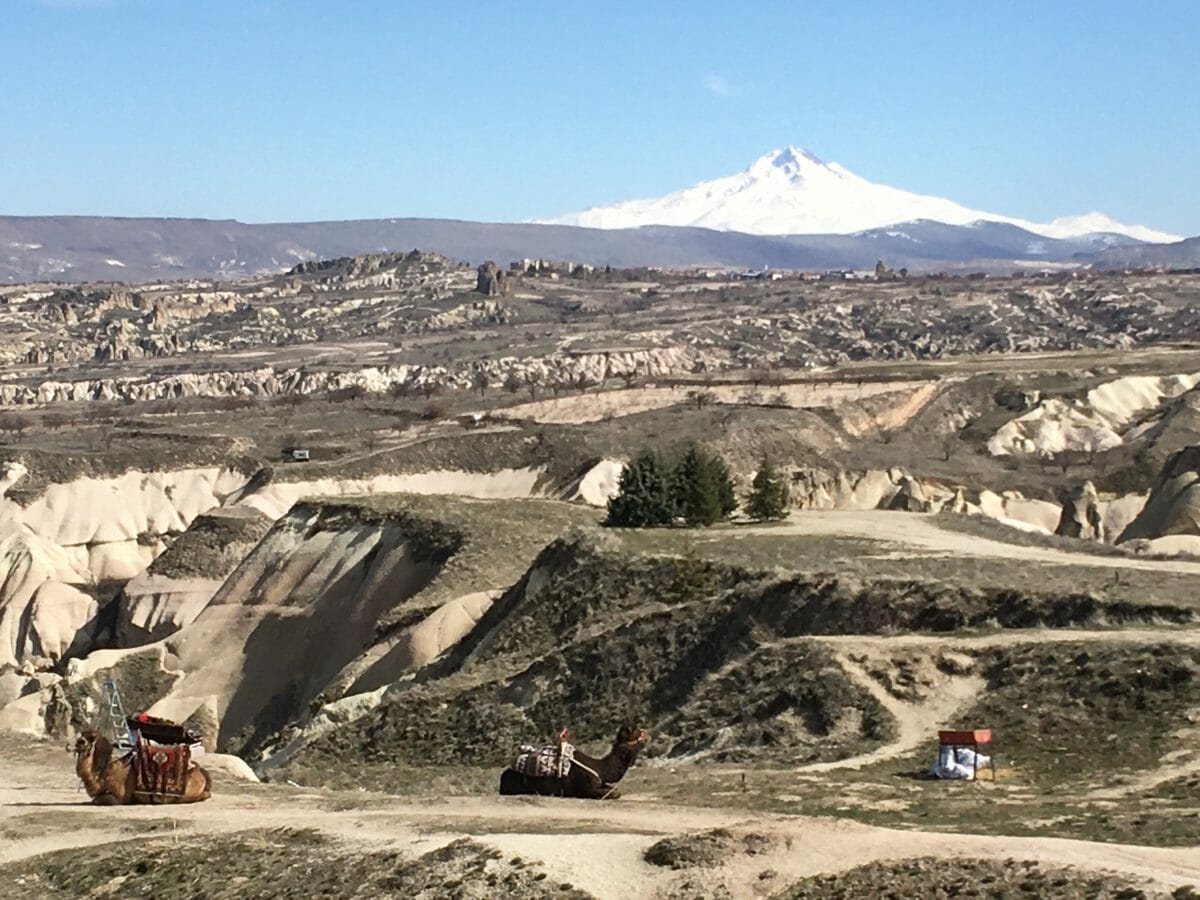 This is Mount Erciyes at 3916 meters–compare it to Mt. Hood Oregon.  And while you’re comparing, this area is also a bit like Moab Utah with a little New Mexico thrown in for flavors.  It is definitely worth the trip–here’s how to do it.  Get to Istanbul (see previous blogs or The Man in Seat 61) first, then take the train to Ankara.  The Ankara YHT is a high speed train but only on some parts.  You can reach this now from nearly the center of Istanbul which links in with the new Marmaray East-West connecting train…..at the Sogutlucesme station.  It’s actually easy to find.  As you leave Istanbul, you’ll see huge bored tunnels here and there which is the future high speed rail; when completed this will be a superb connection Ankara.  After about 100 miles, you’re up to speed again and in Ankara within 4 hours–and pretty countryside, too! 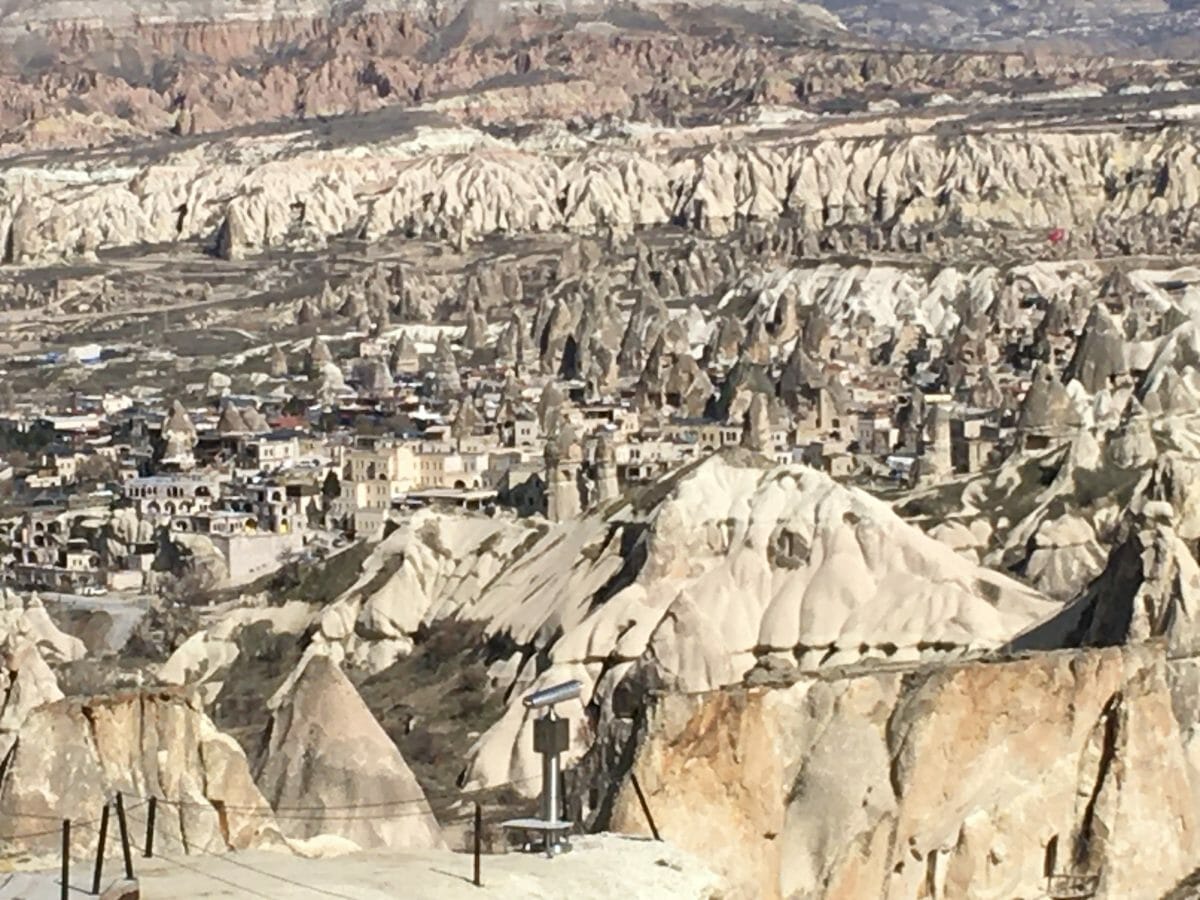 From Ankara, stay in the Hotel Ankara which is right where the train stops–same huge building (screen grab below): 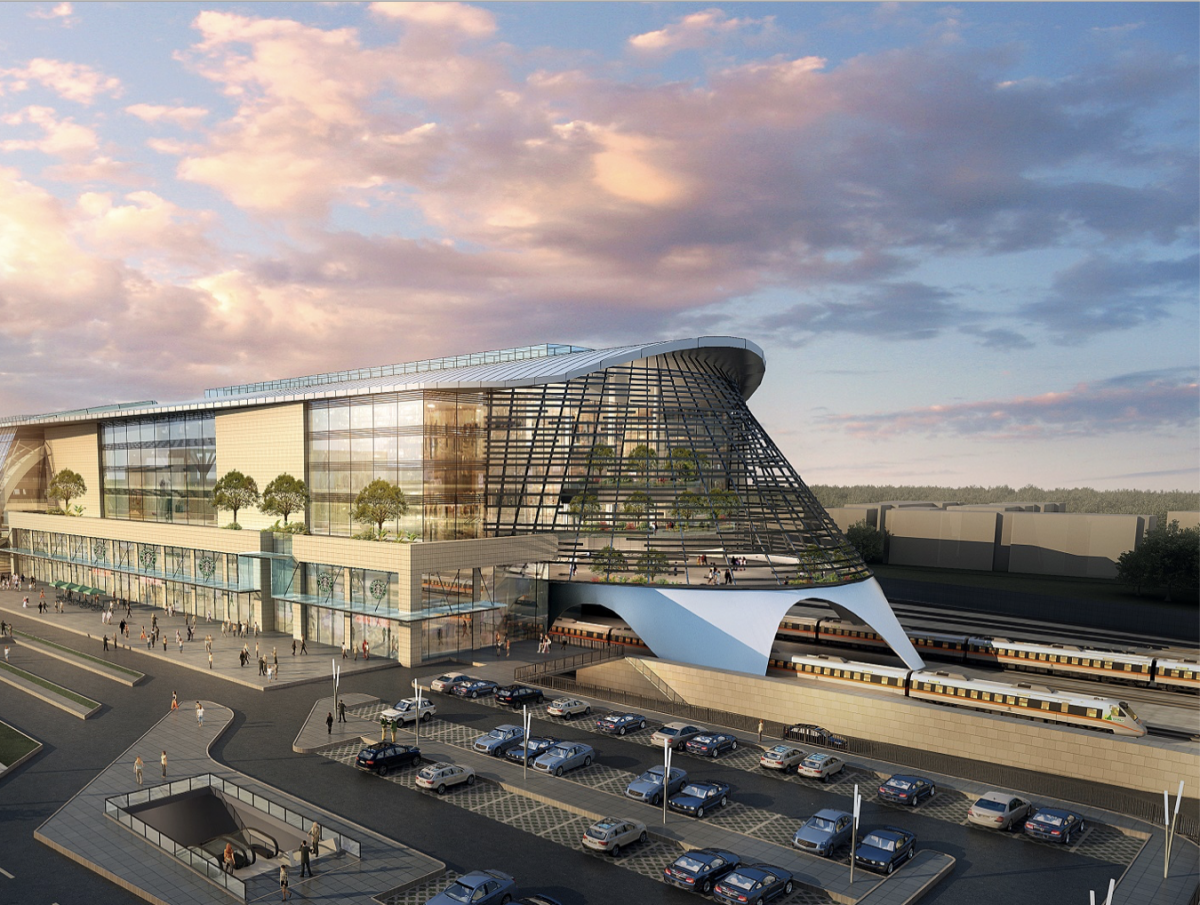 My only confusion here was that the old station still harbors the information services and other such stuff–the new station, while vast in size and modernization, is quite empty right now.  You will be impressed.  I rented a car through Expedia but got bamboozled as soon as I pushed the Buy button, the location of the pick-up jumped across town (Ankara).  At first, not understanding this confusion, I asked the hotel where the car rental was and was directed to the only one adjacent to this station–but on the opposite side (SE).  No matter, the chap at the desk was very helpful, called Budget, who hadn’t been paid and cancelled everything for me, matched my pricing and I was out the door with a nice new Peugeot within an hour.  The drive across Central Turkey is wonderful–not unlike Montana. 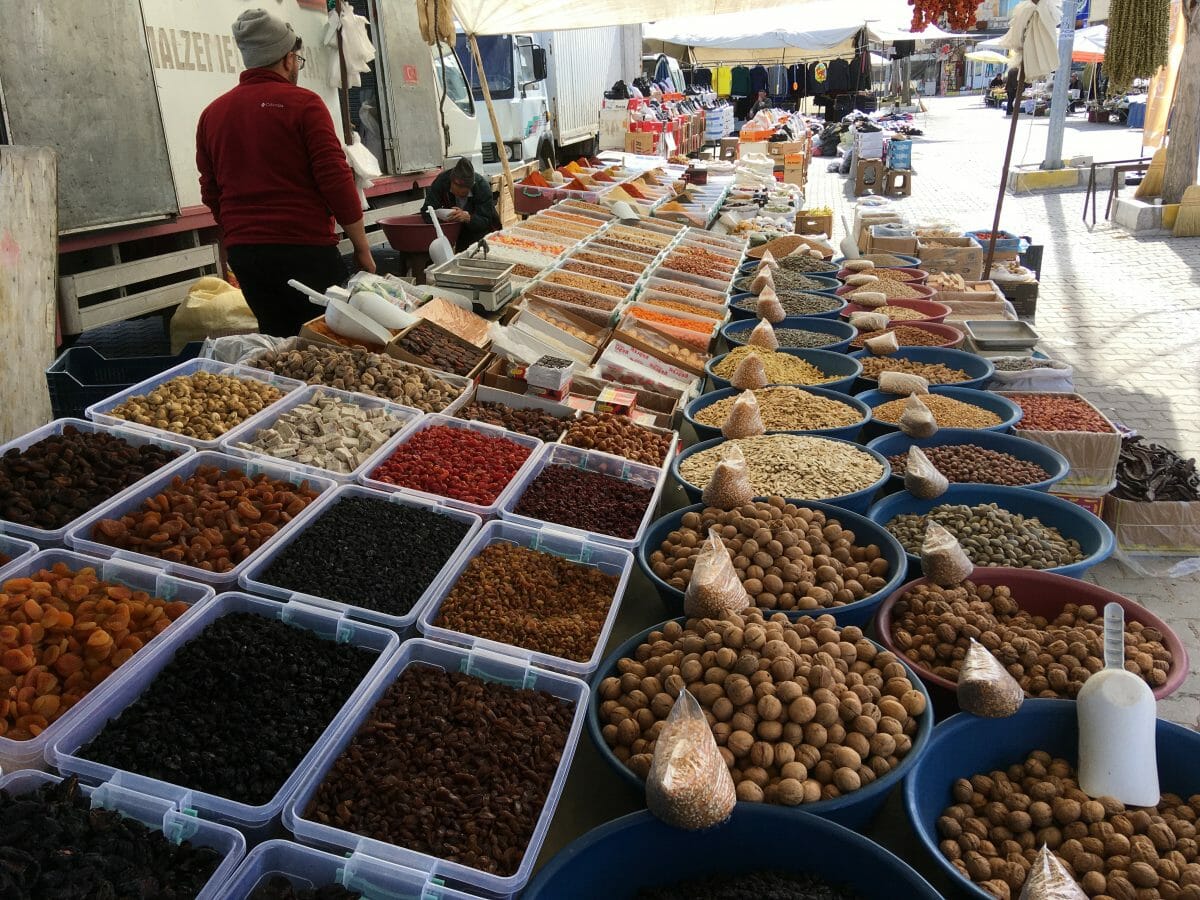 Cappadocia is comprised of about four or five towns clustered within a Swiss-cheese rock formation that spreads for miles.  Hit my quick link to the Wiki page (above) for the history but it’s still inhabited by “Hittites,” some of which still live among the rocks.  This is the Sunday bazaar in Goeme which is the most interesting part of this complex.  There is no National Park per se.   Everything is very touristy with no central tourist information office–just lots of private enterprises from hot air balloon rides (mornings only) to camels to four wheel buggies.  A cadre of Turkish entrepreneurs will take you around on a “Route 66” type tour in an old 1955 American car–don’t do this–the roads and brake systems are not compatible! 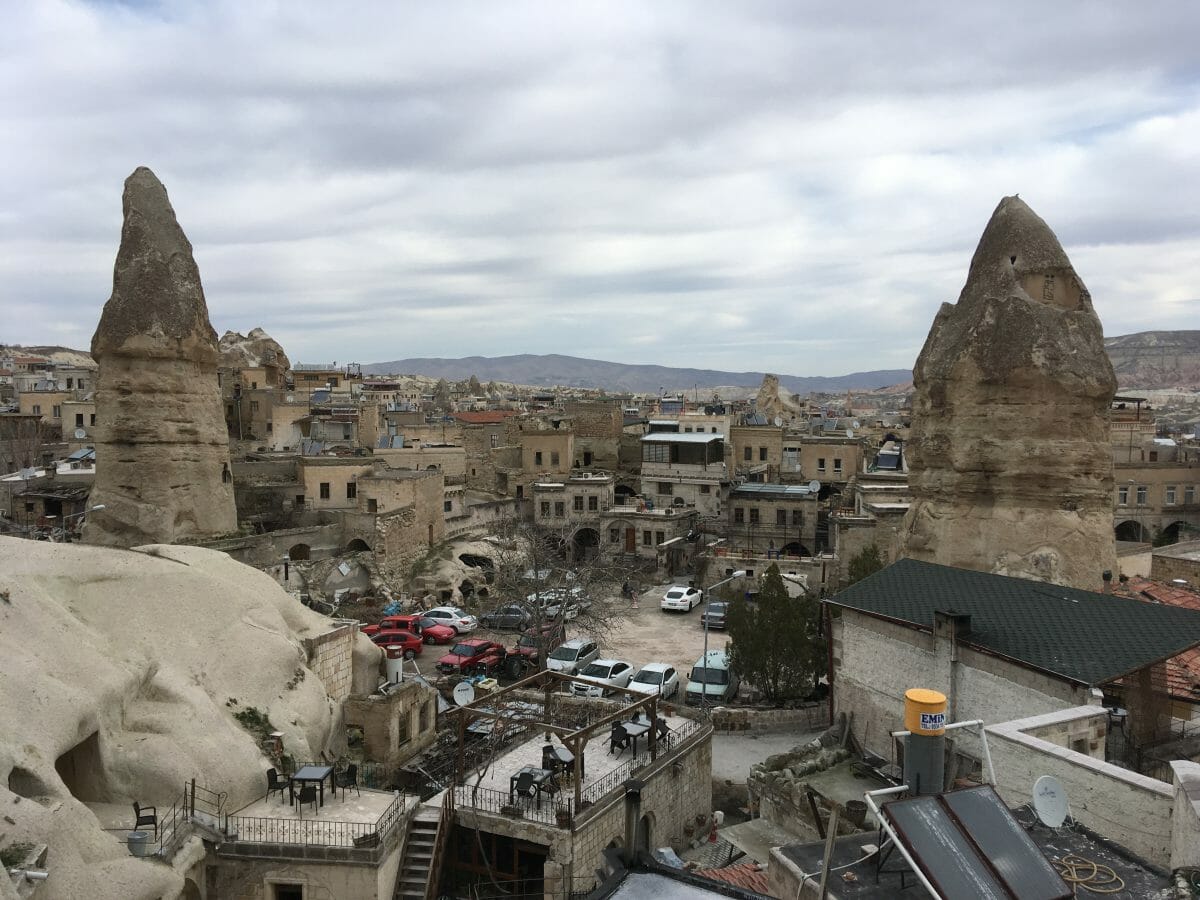 This is the view pretty much from my room.  Unsure at first where to stay, I drove to several of these little towns and finally stopped at a huge old 1800s hotel and asked the kid at the desk where I should stay in Goeme.  He gave me three places so I drove back and chose this one–the ShoeString Cave Hotel. 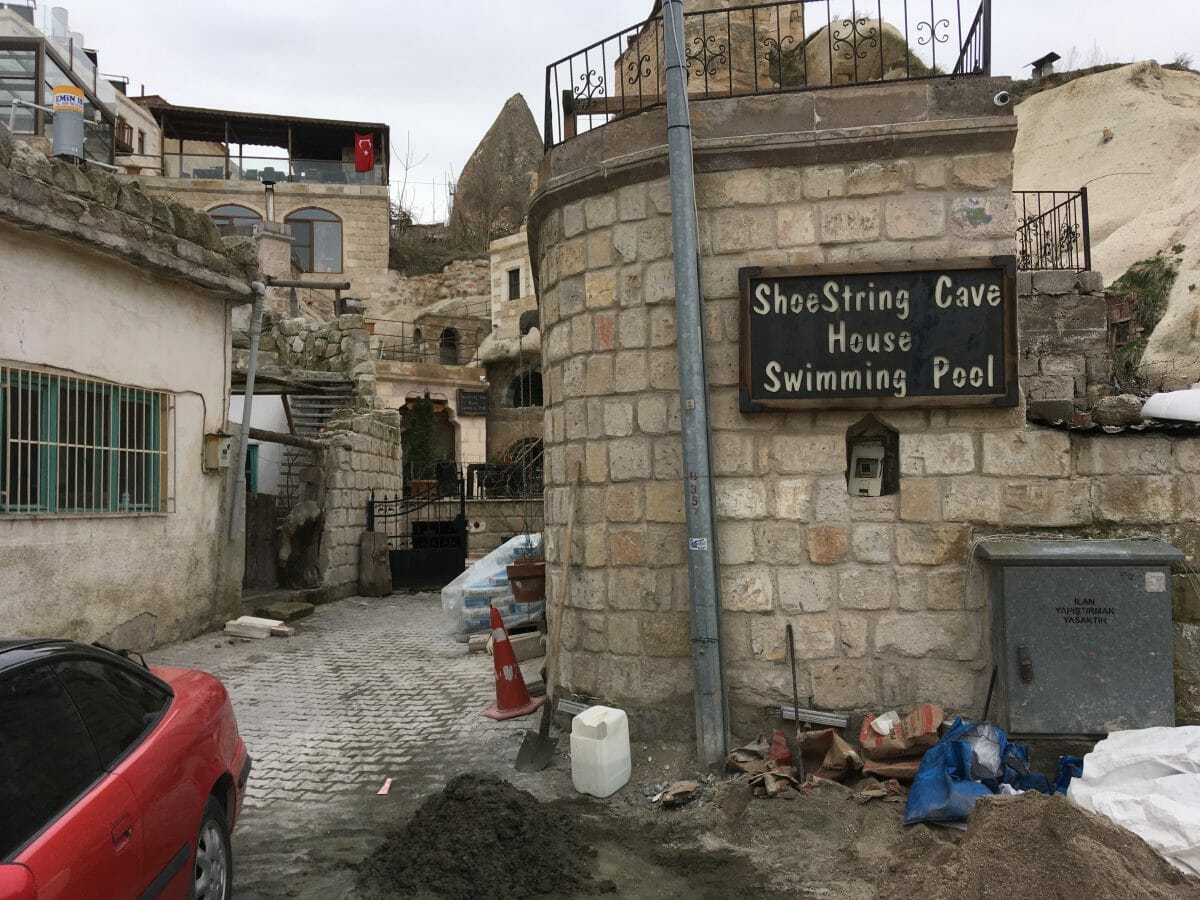 You’ve got to have the word “Cave” in your hotel name or you’re not going to do the tourist business.  There was a serious amount of construction going on and the pool was not functional.  But less that $50/night.  Here’s the place. 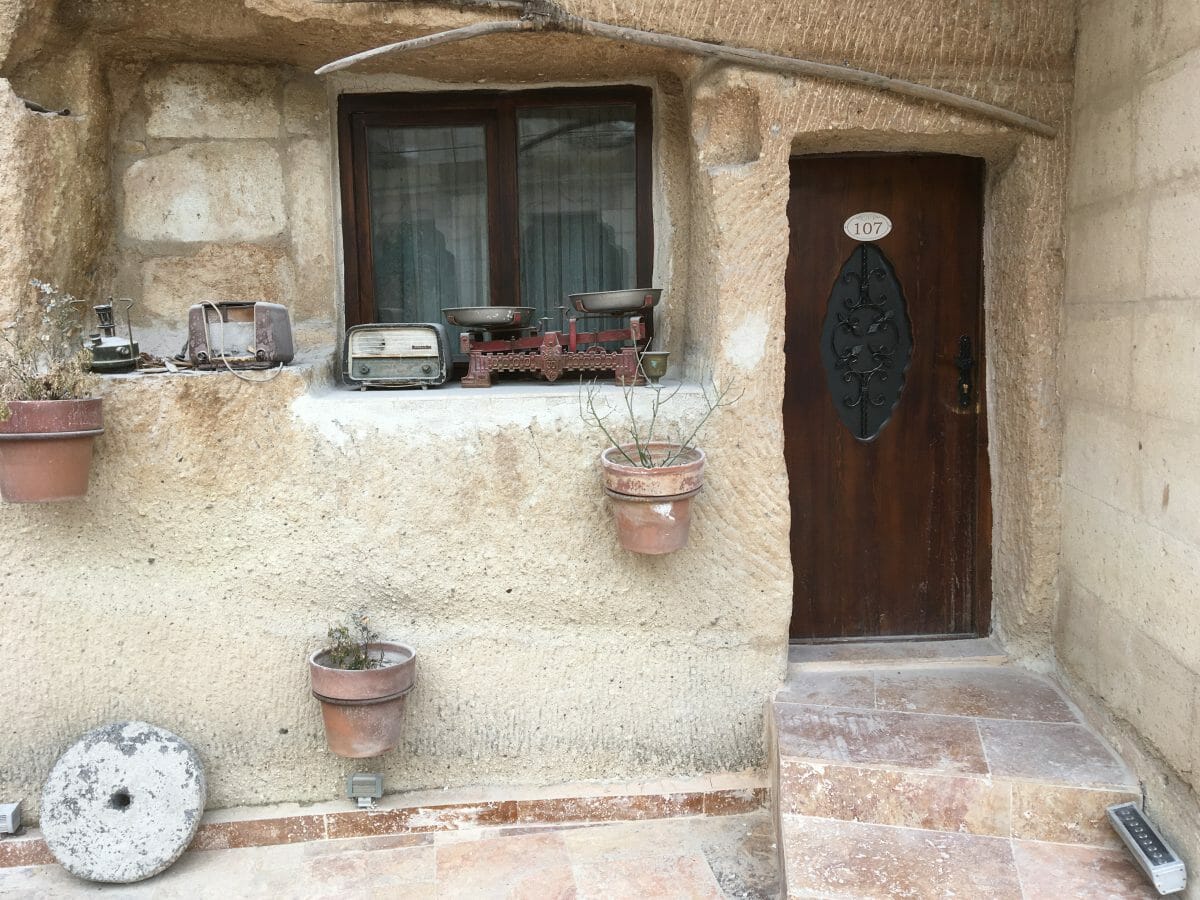 And here’s my little room.  It reminded me of Coober Pedy, Australia, where it’s so hot the whole town is 60′ underground in nice cool chambers without the snakes and scorpions. 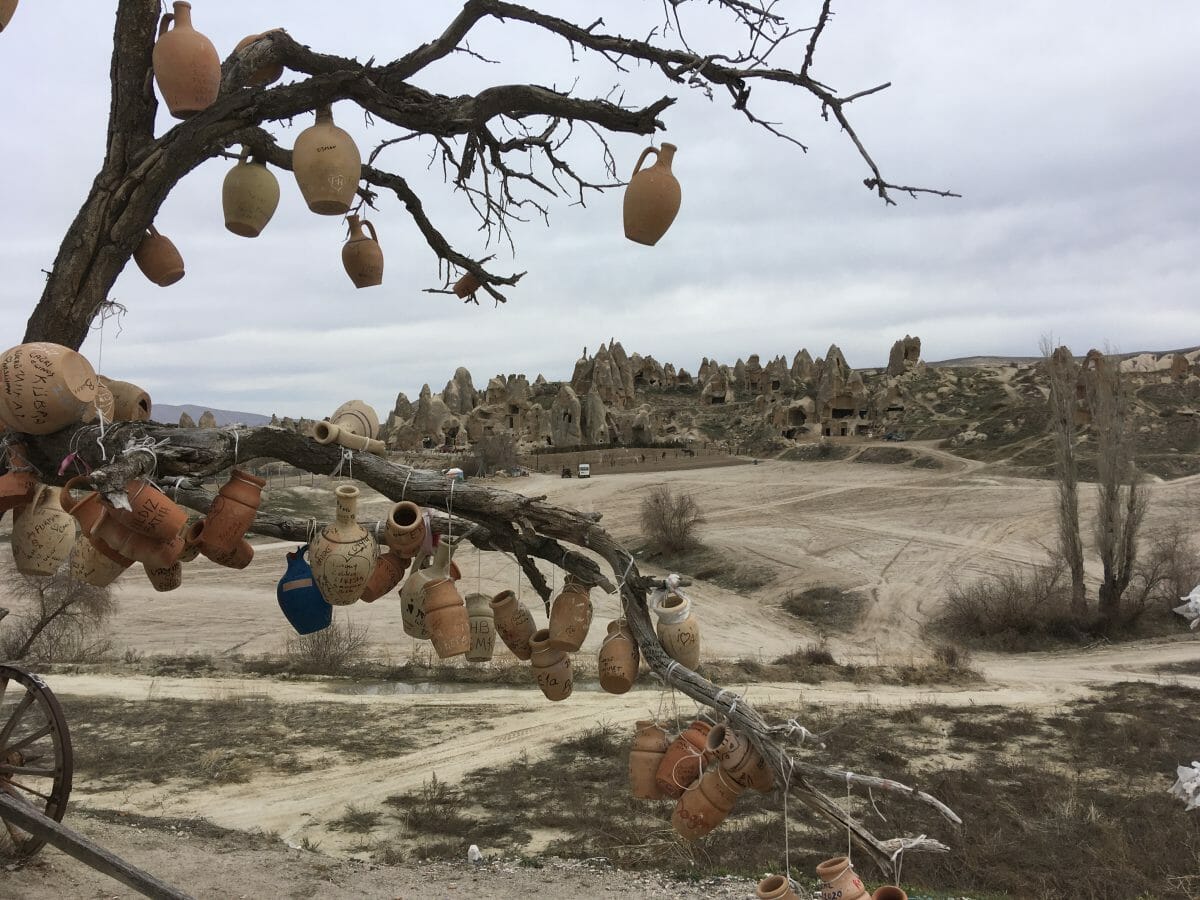 The next morning I drive around for a bit of a look.  There are literally thousands of tourist shops–mostly ceramics like these.  I found a surprising number of Russian tourist traps–Cyrillic letters and all.  It appears the Ukrainians and Russians habituate this place quite regularly, like Antalya to the south. 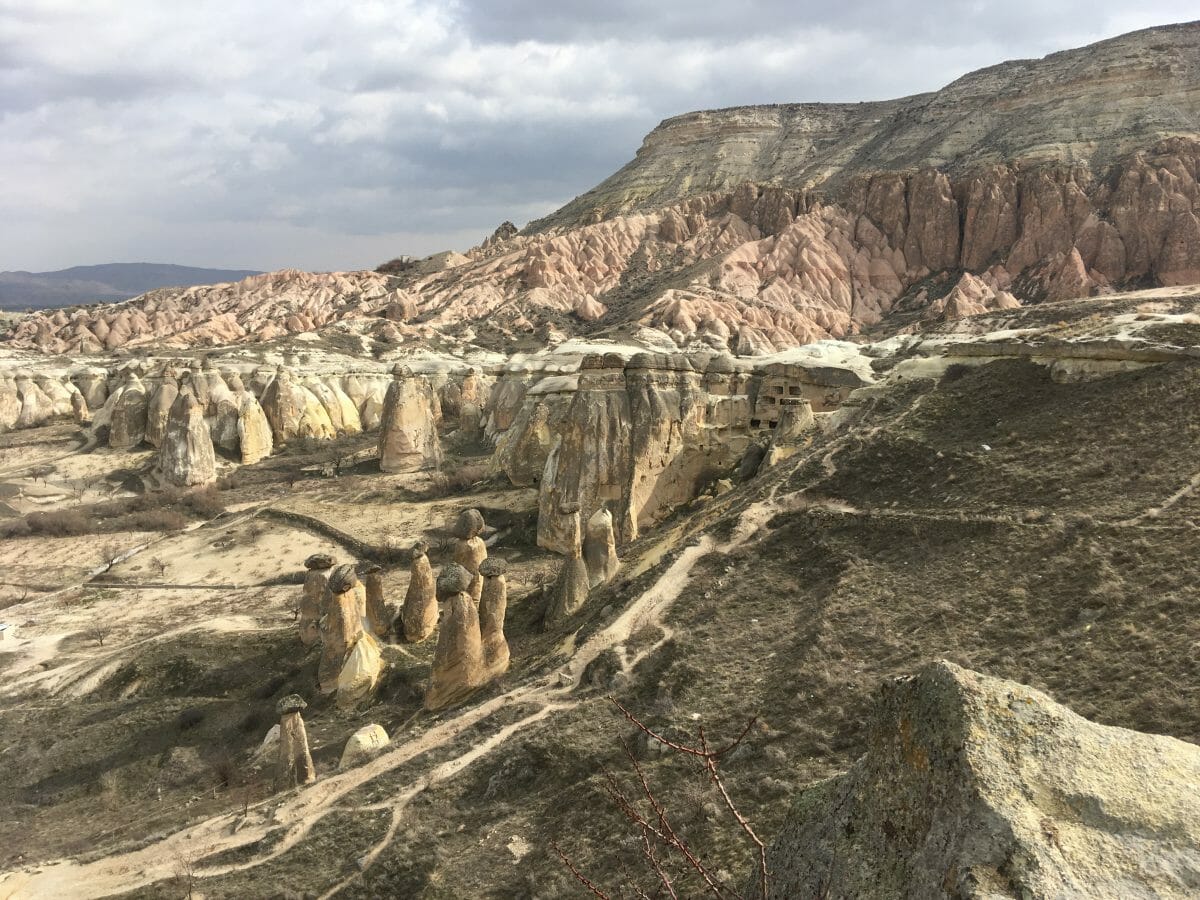 The second day I drive over to the next small town and admire the geology from this ridge.  It’s very similar to Arches National Park without the protections.  A few dozen million years ago, the volcanic ridge to the south spread this ash, actually a welded tuff, all through the area which was followed by a cap of basalt like material–not true basalt as it also eroded very quickly.  But more iron-rich, or mafic as geologists like to say (auto-correct thinks it’s magic, which it is). 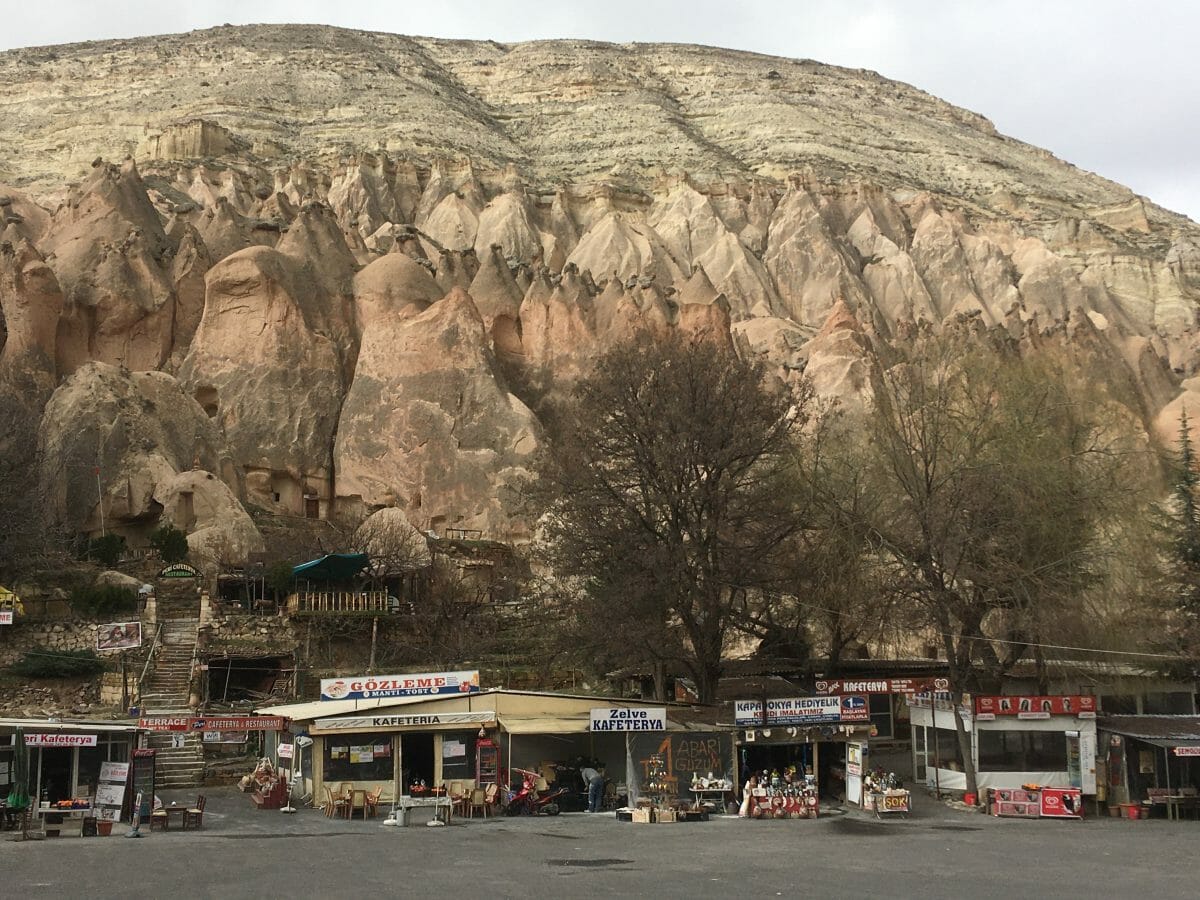 There were two areas that I found that were protected by a fence and this was the first, except the hotels were built right up into the rocks.  But, hey, it’s an “economic” zone as per Erdogan’s instructions.  Made me appreciate our National Park system.    This is Zelve–let’s take a short tour: 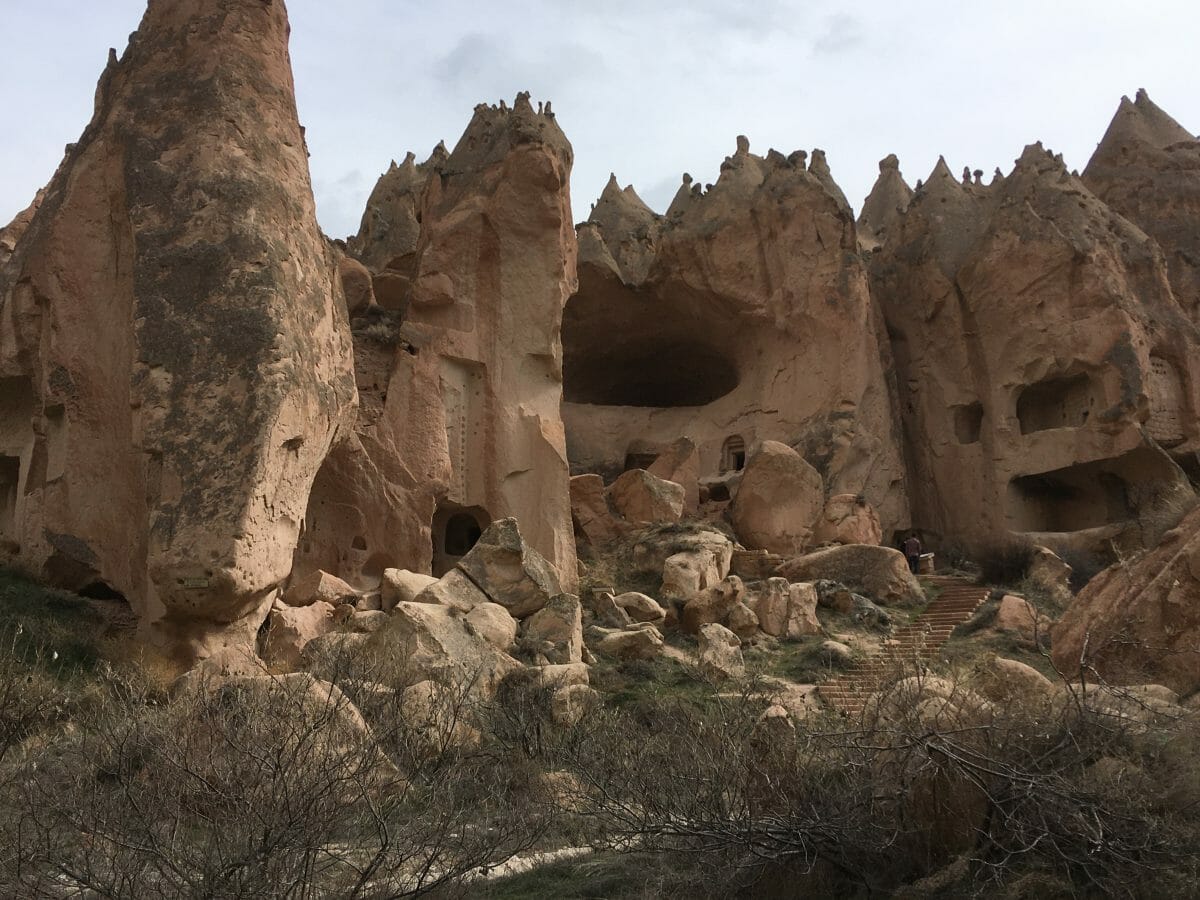 It’s only a few dollars to get in (about 20 Turkish Lira as I recall or about $3.50).  The pathway leads you around an hour walk–very similar to Bandelier National Monument in Northern New Mexico.  Rabbit warrens where people dug in, about 400 AD to escape persecution and defend themselves.  Again, the history is too complex to mention here.  Unseen here are two complete underground towns that housed 17,000 individuals.  I went int one but it was a very small part and absolutely no interpretation nor signs.  I left within 10 minutes. 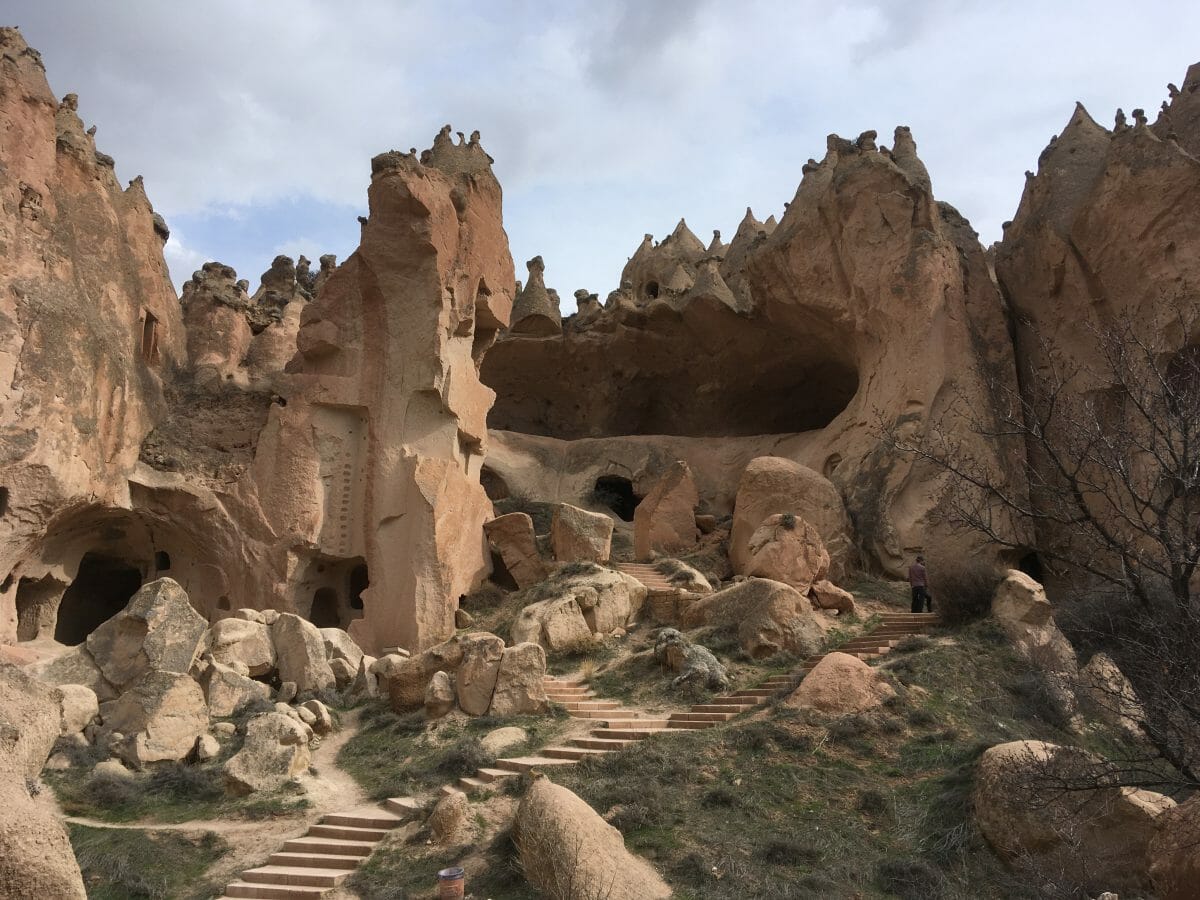 Another view.  A very wonderful place to explore–most of these rooms are open to the public. 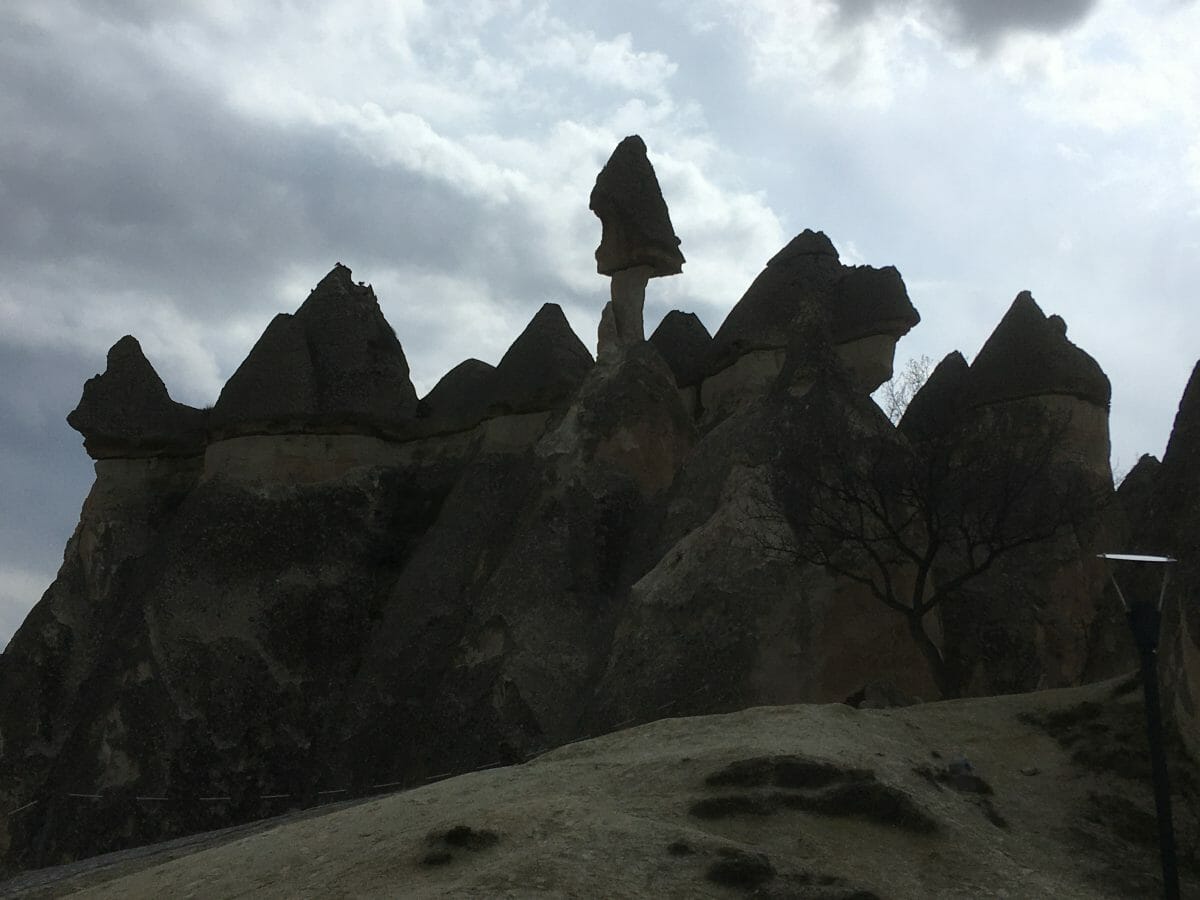 The other protected area is Pasaba (if I’m getting this right–there are no maps) which are the mushroom like structures, of if you prefer…..fairy towers. 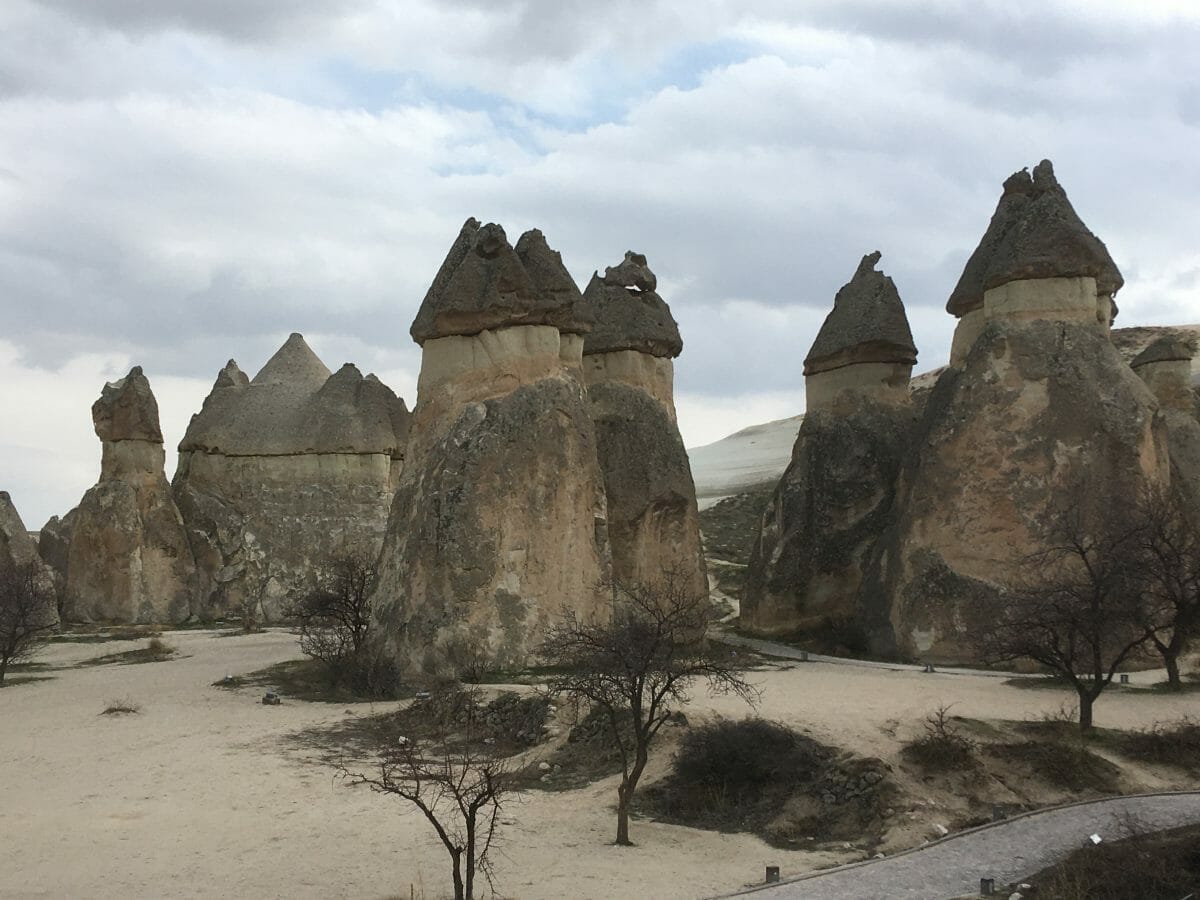 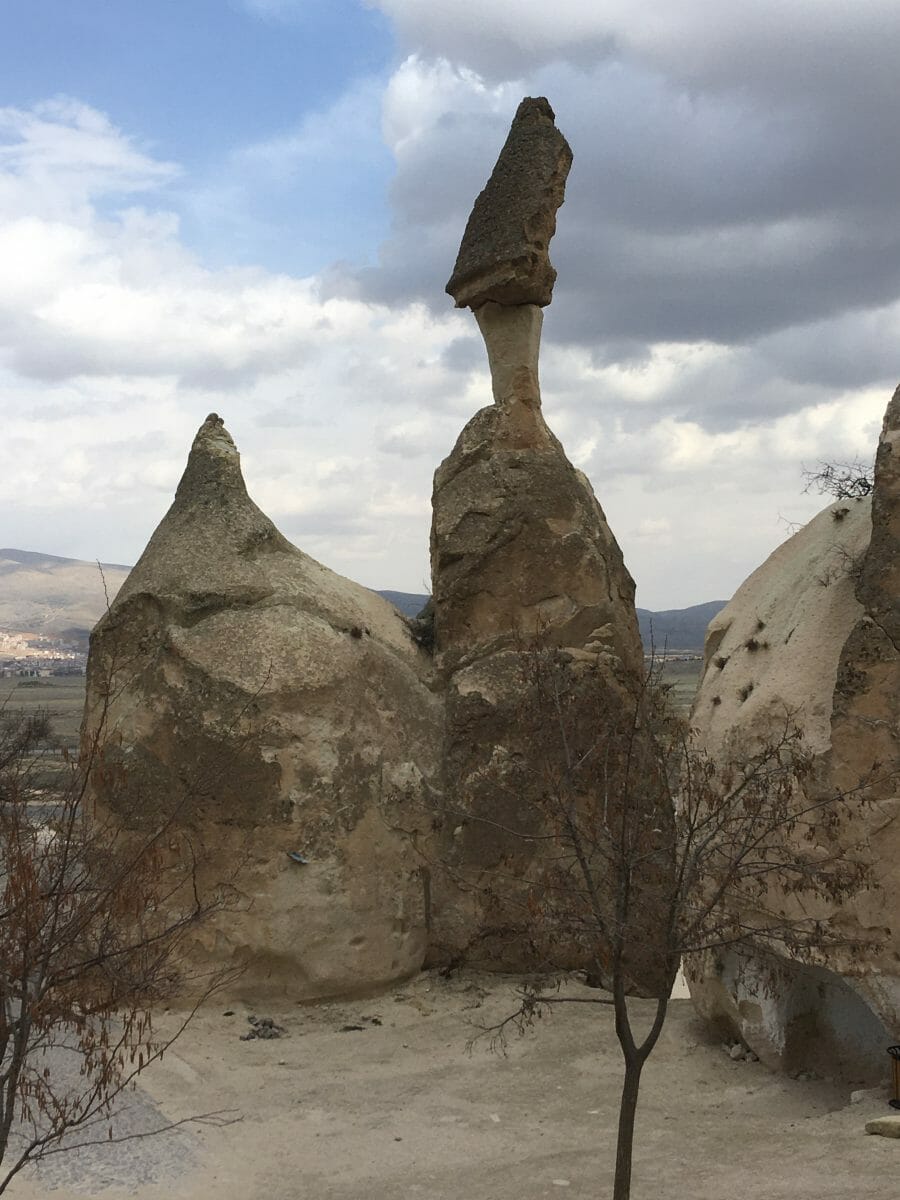 And some are quite bizarre.  The harder basaltic cap protects erosion beneath. 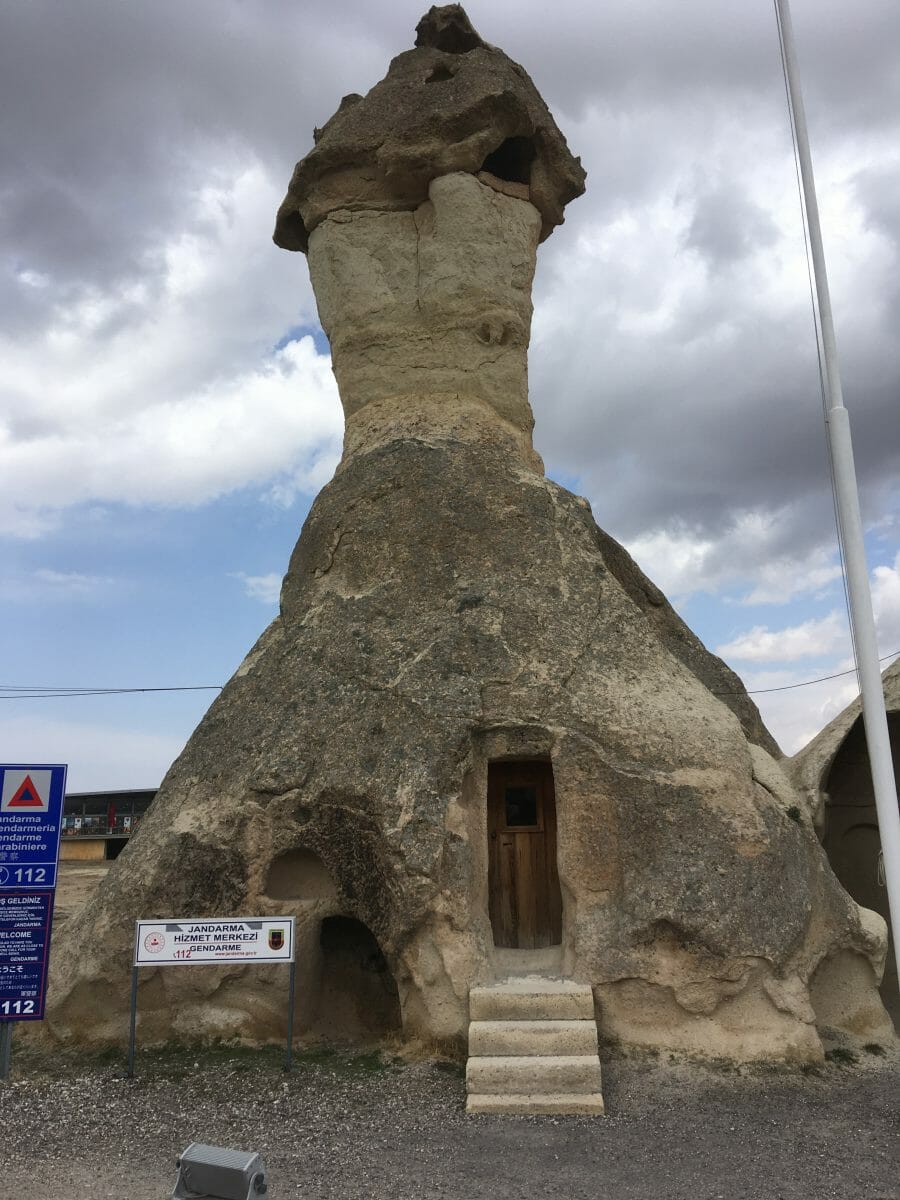 A hobbit House at the entrance. 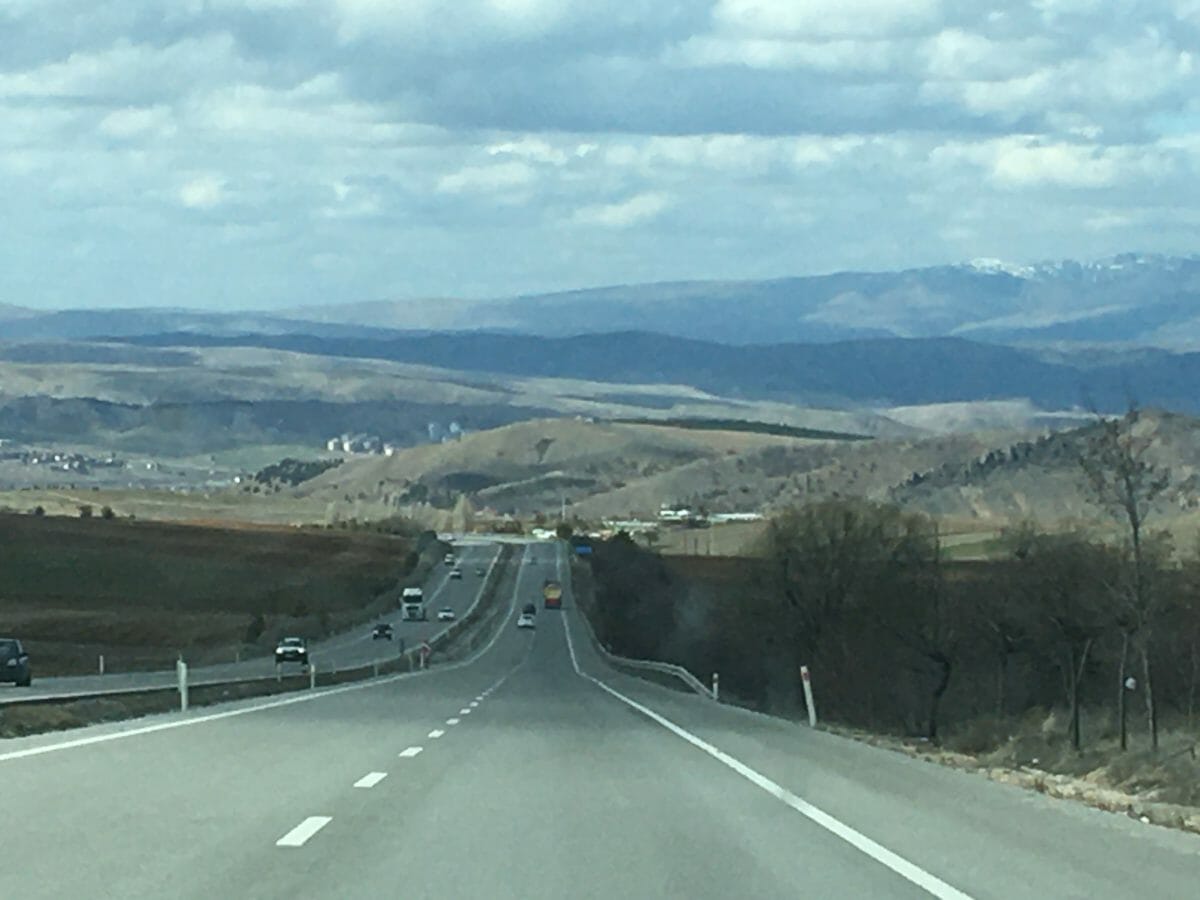 Take this trip!  Getting there is half the fun.  Turkey’s infrastructure, while a bit frustrating at times, is quite modern.  I even got a ticket on this stretch for going 10 mph over the limit.  They were very nice and even asked about my mother and father…..who have been dead for 20 years.  Twenty miles down the road, I got pulled over again, this time by mean looking, machine gun wielding police.  I began to get out my ID again to which they simply waived me onward without looking at it.  Puzzling.

To pay this ticket (in Istanbul), I spent two days, went to three agencies (post office, banks, and finally the tax office), walked about 5 miles in the rain and finally was told they couldn’t take my money (about $35.00) because I was not a citizen and I would need a temporary tax number…..upstairs two floors, please.  After queuing up for the 10th time, they told me I would need all my ID including my passports and other travel documents. I went back down stairs, plunked 300 tl on the counter and told the guy I was leaving the next morning.  He handed back one of the 100s, gave me a receipt for the paid ticket and a smile! 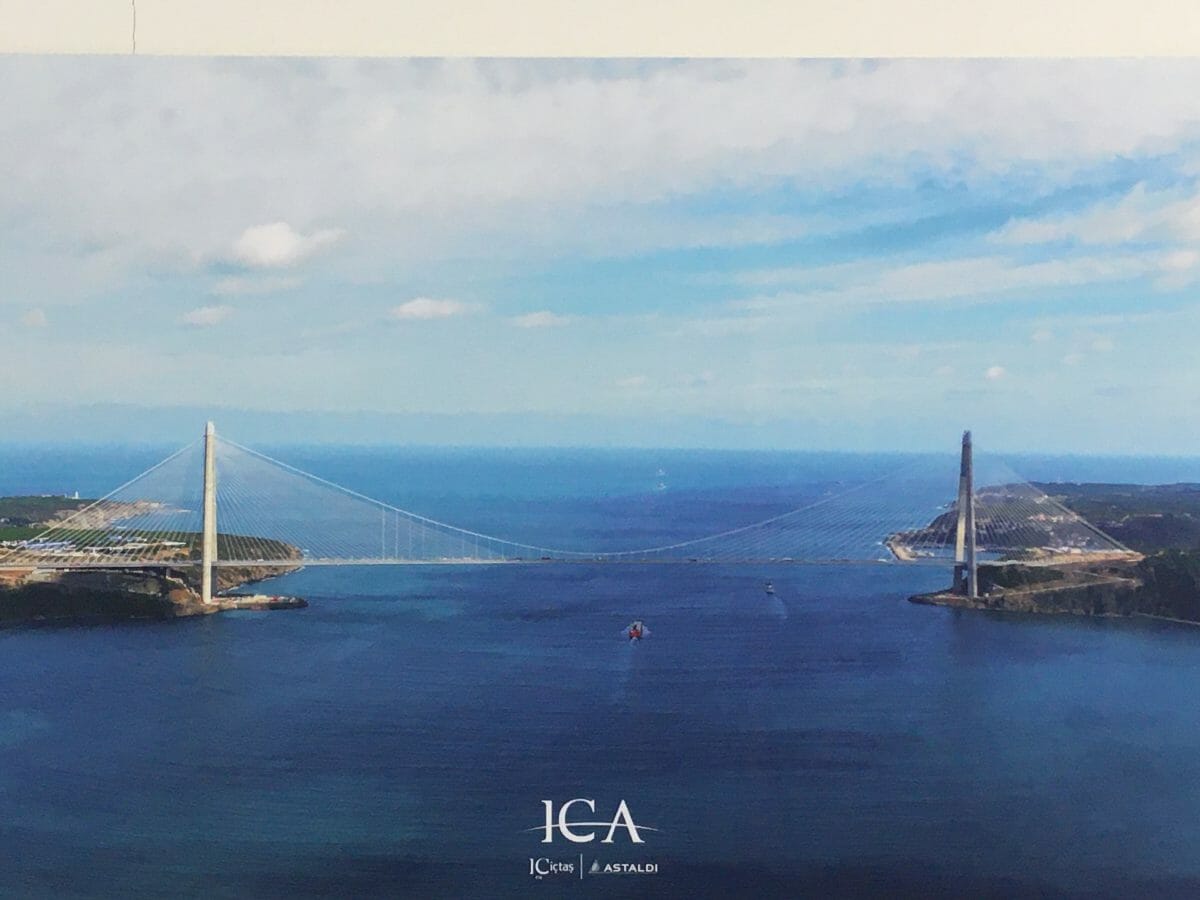 I’ll leave you with one thought–this is the largest suspension bridge in the world–actually a photo of a photo that hangs in the office of the bridge managers in Istanbul.  The span is almost a mile wide and the height of the supports are over 1000’……and I was invited to ride along for the engineers safety inspection.   Sure, sure, but it’s true–and I stood on top of the left support and also walked through the center span for about 1/4 mile.  I gave my word not to publish these on any social media so you’ll have to take my word for it.  But, it was an experience of a lifetime.   And this is one hell of a bridge. 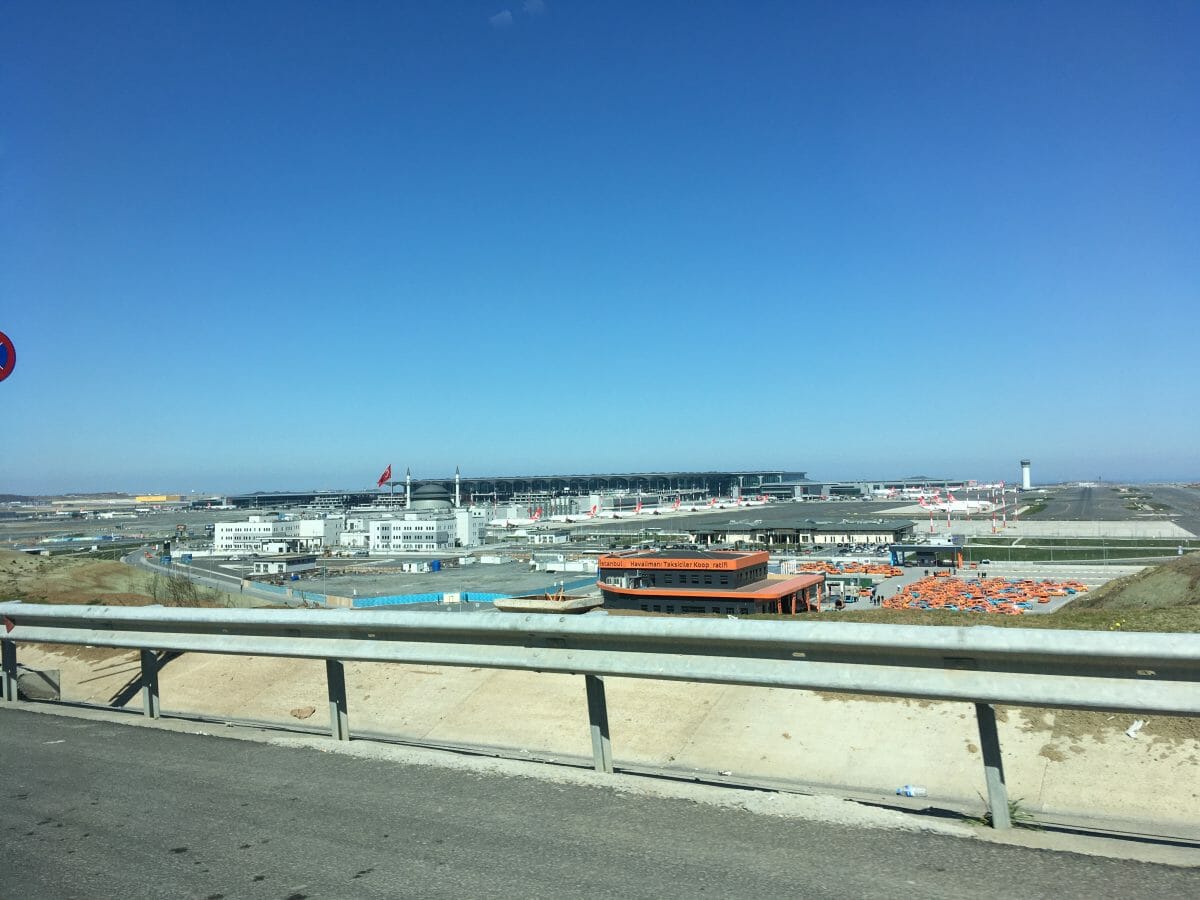 With the Corona virus plaguing our newspapers and media, three European countries close their borders (Italy, Switzerland and effectively Austria) where I need to train through to catch my freighter (Southampton England).  It is hopeless and likely irresponsible giving I’m in a high risk category….so I bite the bullet and fork over $2000 for a ticket out of Istanbul (to Toronto) to secure a first class ticket (seat 1B)…..which is given away to a woman who wants to stretch her legs out–well, what about mine?  The attendants assured me I didn’t want to sit next to this sniveling screamer (in 1A) especially with the current health issues, so I end up in a middle seat.  This is why I haven’t flown in about 10 years with one exception: 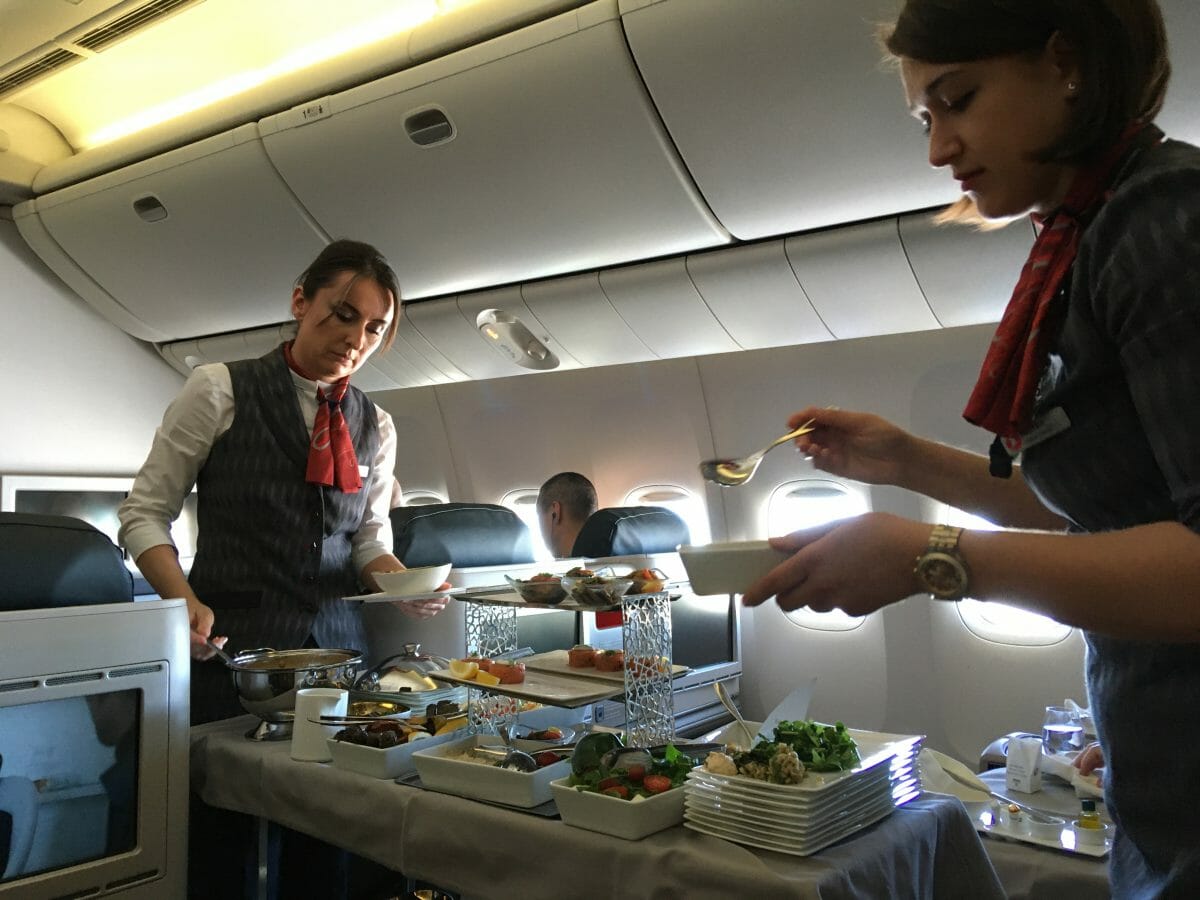 That was an “emergency trip to Hawaii after my surgery.  I must say that Turkish Airlines is one of the best I’ve every flown on.  I hardly felt the movement of the plane (it was a 777), the service was non-stop courses of the best food I’ve eaten in months.  But, airlines are woefully out of touch with the way they move passengers around this planet.  I hunkered down for 11 hours and woke up in Toronto only 5 clock hours after I left. 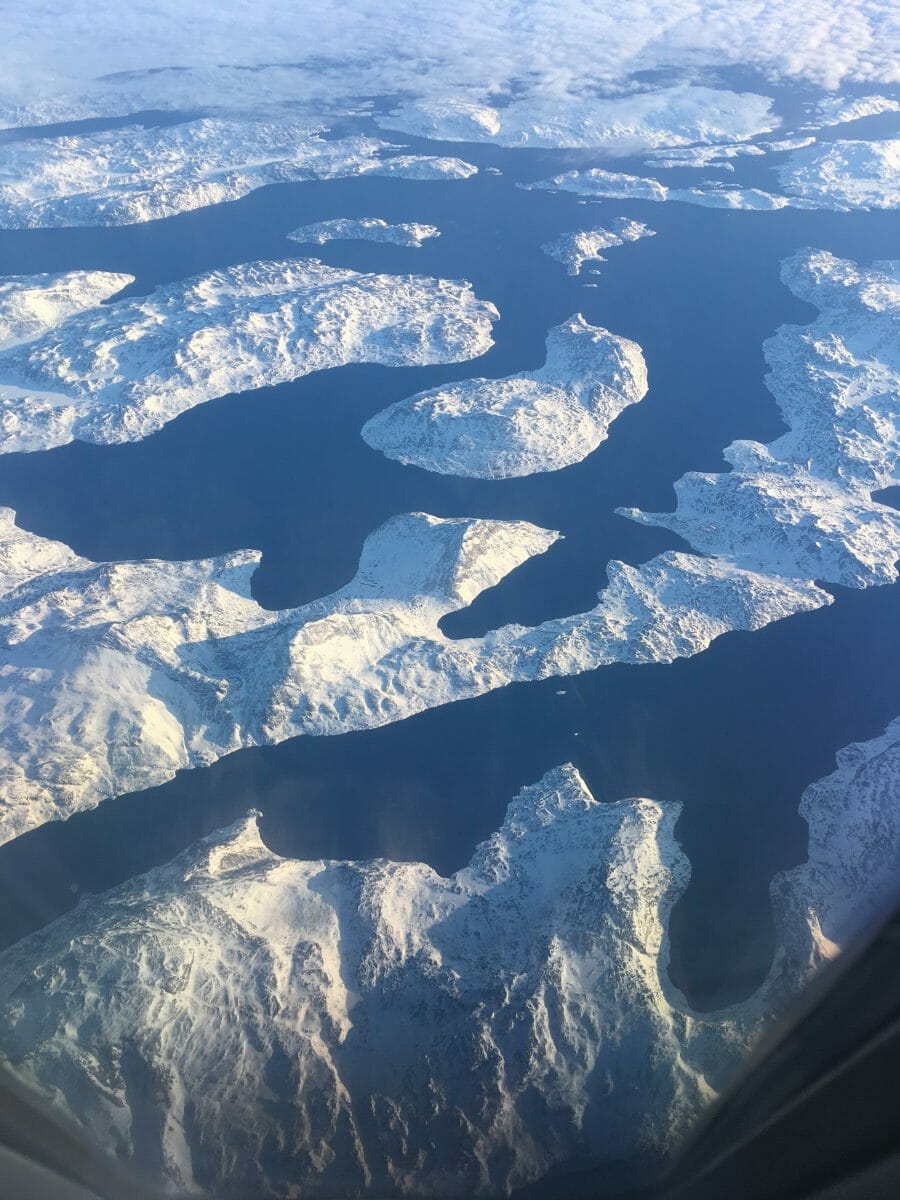 Here’s what Greenland looks like in winter.  After landing, I train (another half hour) to Toronto’s Union stop, grab three nights at the old Fairmont Hotel (magnificent old hotel right across from the station and freshly remodeled–but they charge $12.50 for a beer and $25.00 for a glass of wine!!) and await my VIA rail trip across to Vancouver BC.  All trans-Canadian trains were cancelled within hours after I made the reservation and extended my hotel (they run Sunday and Wednesdays west-bound).  Expedia booked my in error for the hotel and when I tried to call them, they were not taking calls for 7 days–I hung on one hour before they cut me off.  As an alternative, I found a non-stop flight to Salt Lake City and a quick connection to Jackson Hole so plunked down another $750 (robbery!) and hopefully tonight I’ll be in my log cabin there…….stay tuned!