The Rahmi M. Koc Museum in Istanbul is one of the finest technological and maritime museums in the world with over 16,000 exhibits.  Mr. Koc is perhaps the most wealthy man in Turkey and owns about 140 businesses in his country.  He is also one of the largest philanthropists on the planet.  Quite by surprise and confidence, while walking through the Sunday flea market, with my host, who did I meet but Mr. Koc.  He was very surprised that I was from Alaska and had traveled all the way to Istanbul by boat and train–the focus of his museum.  He told me that he visited Alaska and wrote a book on it–to which I replied (much to his surprise) that I had read it.  I was happy to make his acquaintance and I thanked him for all he’s done, for not only Turkey, but the world.  He’s a true renaissance man. 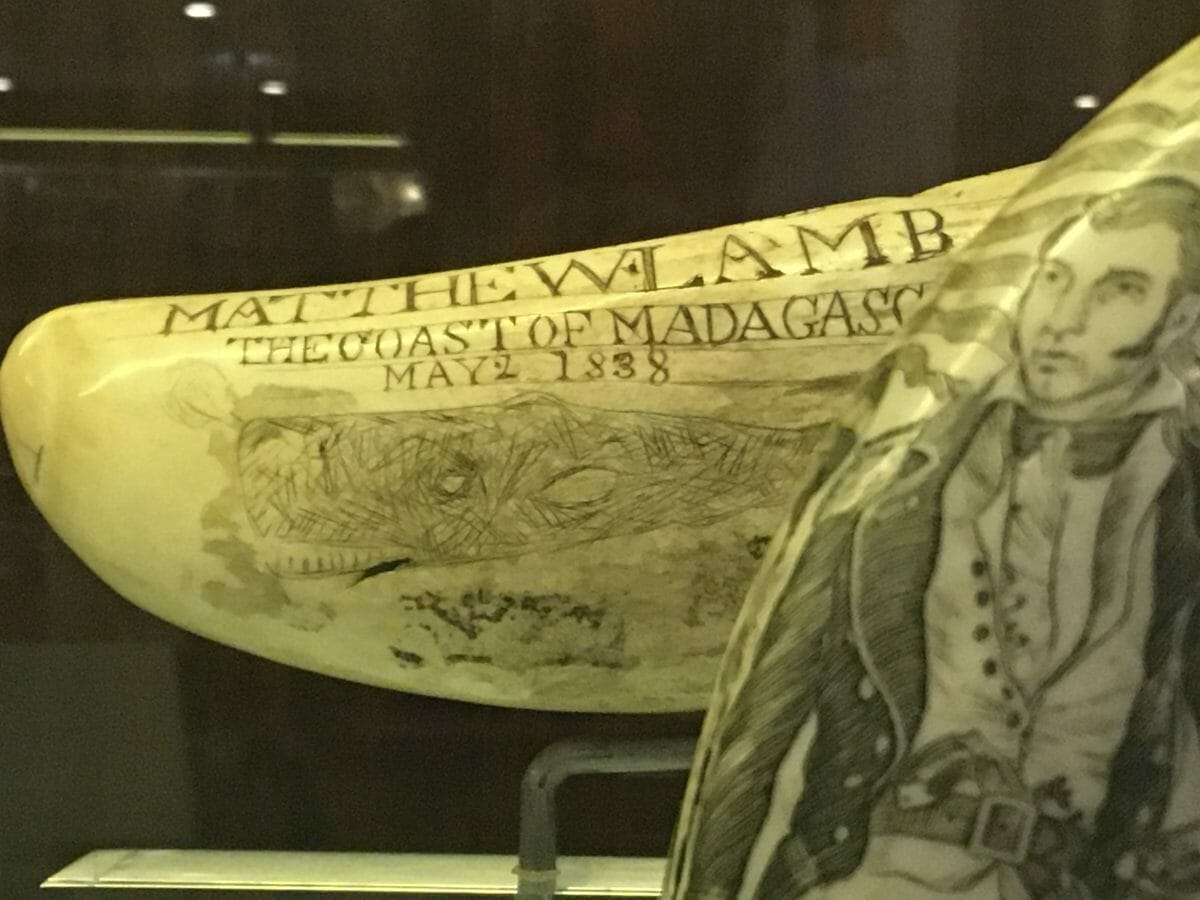 Outside of New Bedford, Connecticut, it probably has one of the largest scrimshaw collections and likely dating back earlier, and to far more exotic places prowled by sailors.  Scrimshaw, for those of you who can take the environmental travesty, is artwork etched on sperm whale teeth by sailors who idled away their time at sea.  Once a population of over one million, they were hunted until only about 30% of the whales survived–and the majority of these harvests were post WWII by the Japanese and Norwegians using modern equipment.  Sperm Whale hunting now is virtually banned world-wide but populations remain endangered.  Their poop is very iron rich and encouraged phytoplankton to proliferate near the surface taking carbon to the ocean bottom when they die.  This amounts to about two million metric tons of carbon fixing annually.  Gotta keep these whales around. 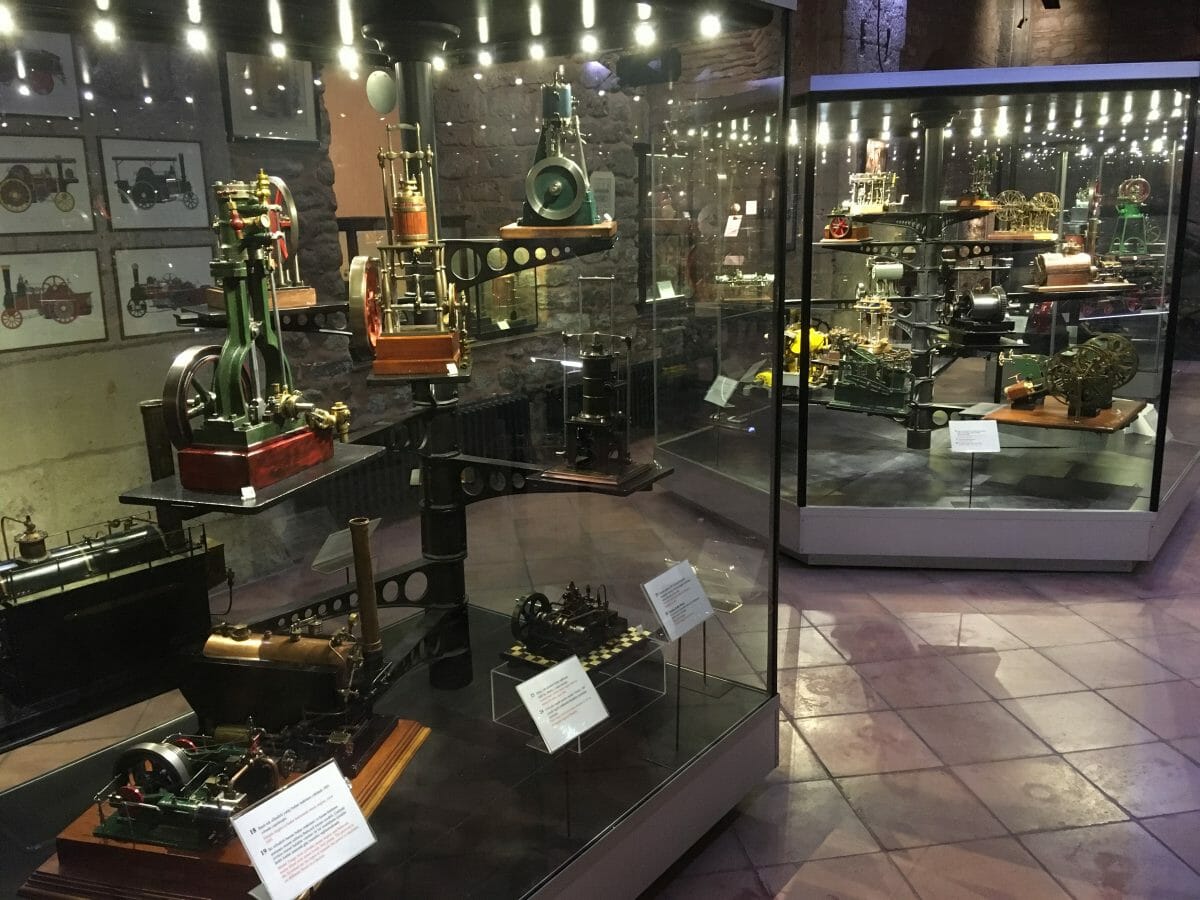 Their ship model department is endless and these steam engines, in miniature, all work.  There literally hundreds of these in every configuration possible.  Single, compound, triple, quadruple and beam steam engines.  Their tallest one is…… 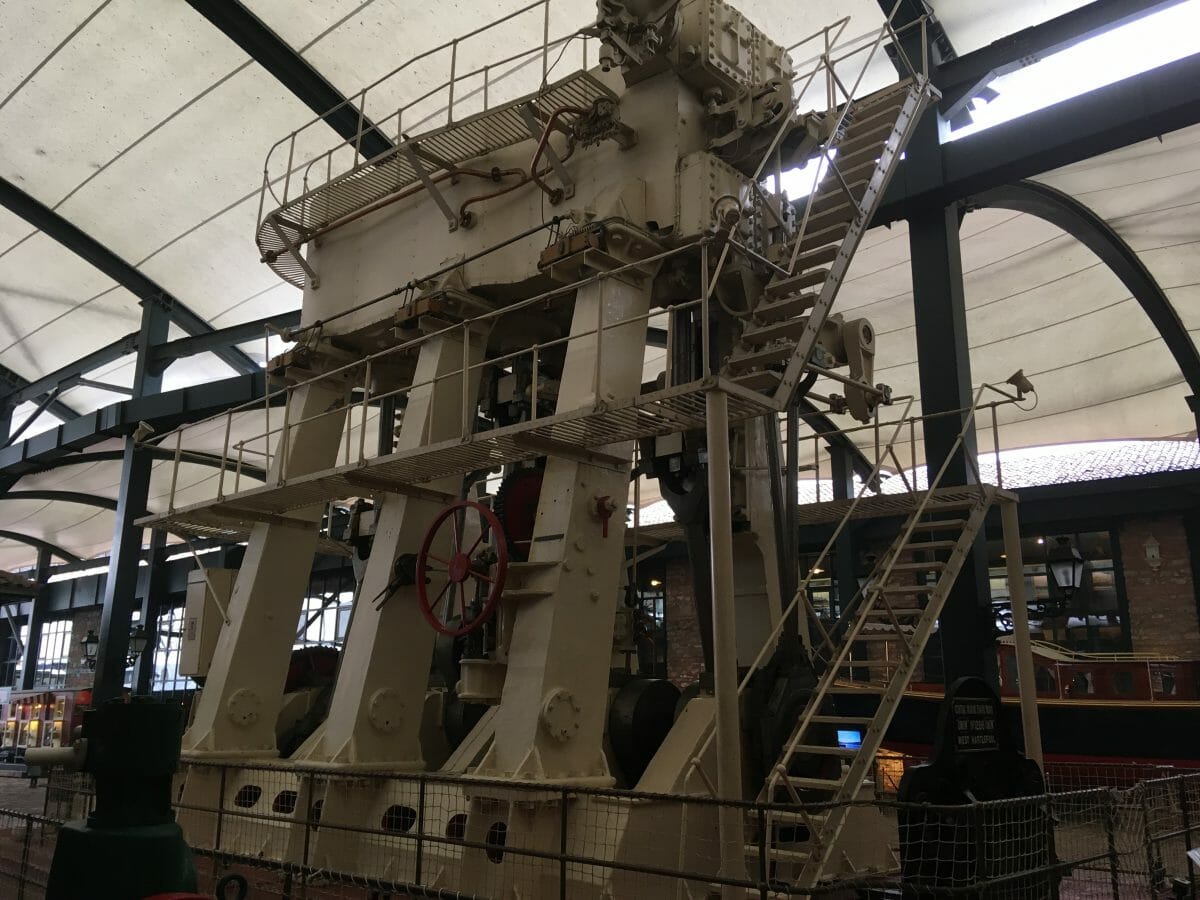 ….right here and stands about 25′ tall.  With the push of a button, this one would function on compressed air or perhaps electrically rotated.  I’m guessing this came out of a large freighter and is similar to the Virginia V’s triple or the Jeremiah Obrien’s triple (which was used in the movie, Titanic). 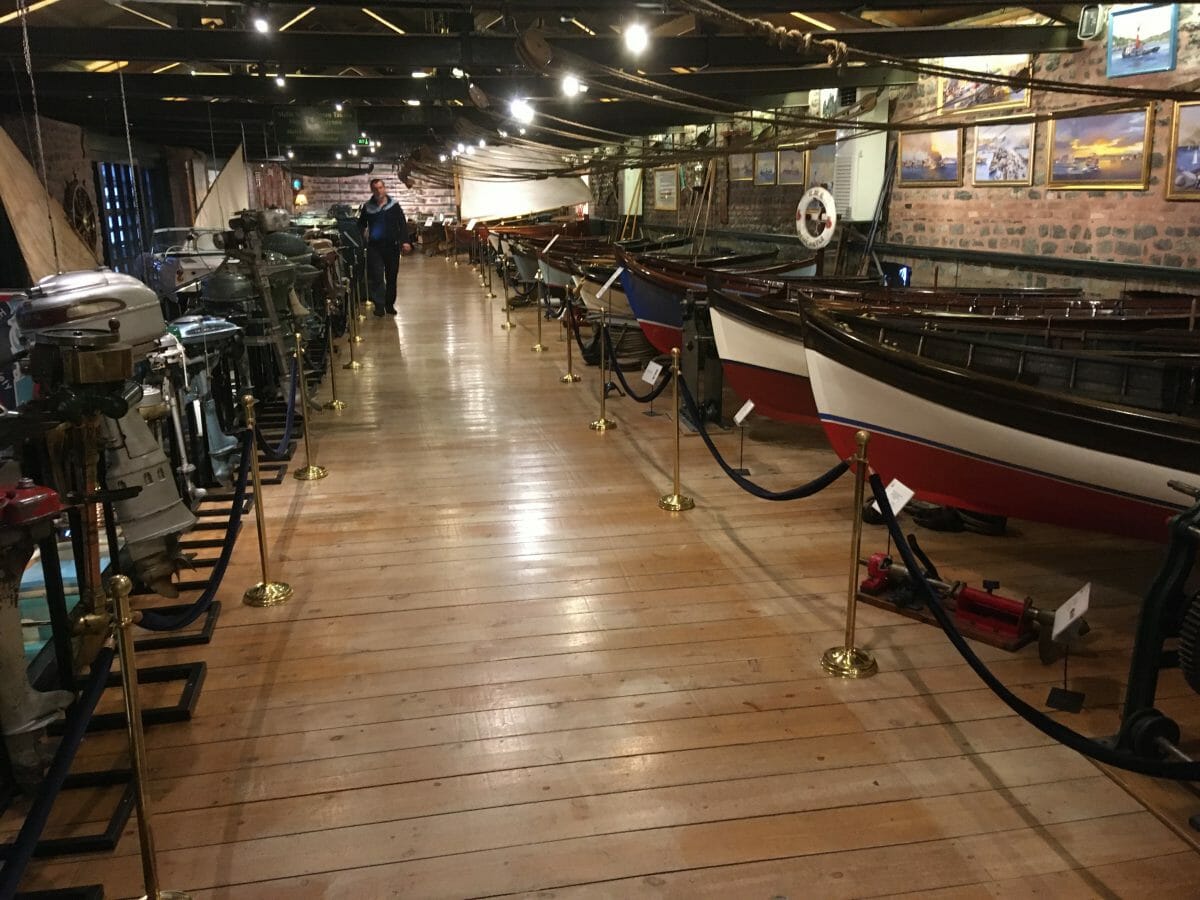 This is the dinghy collection with outboards on the left…..endless! 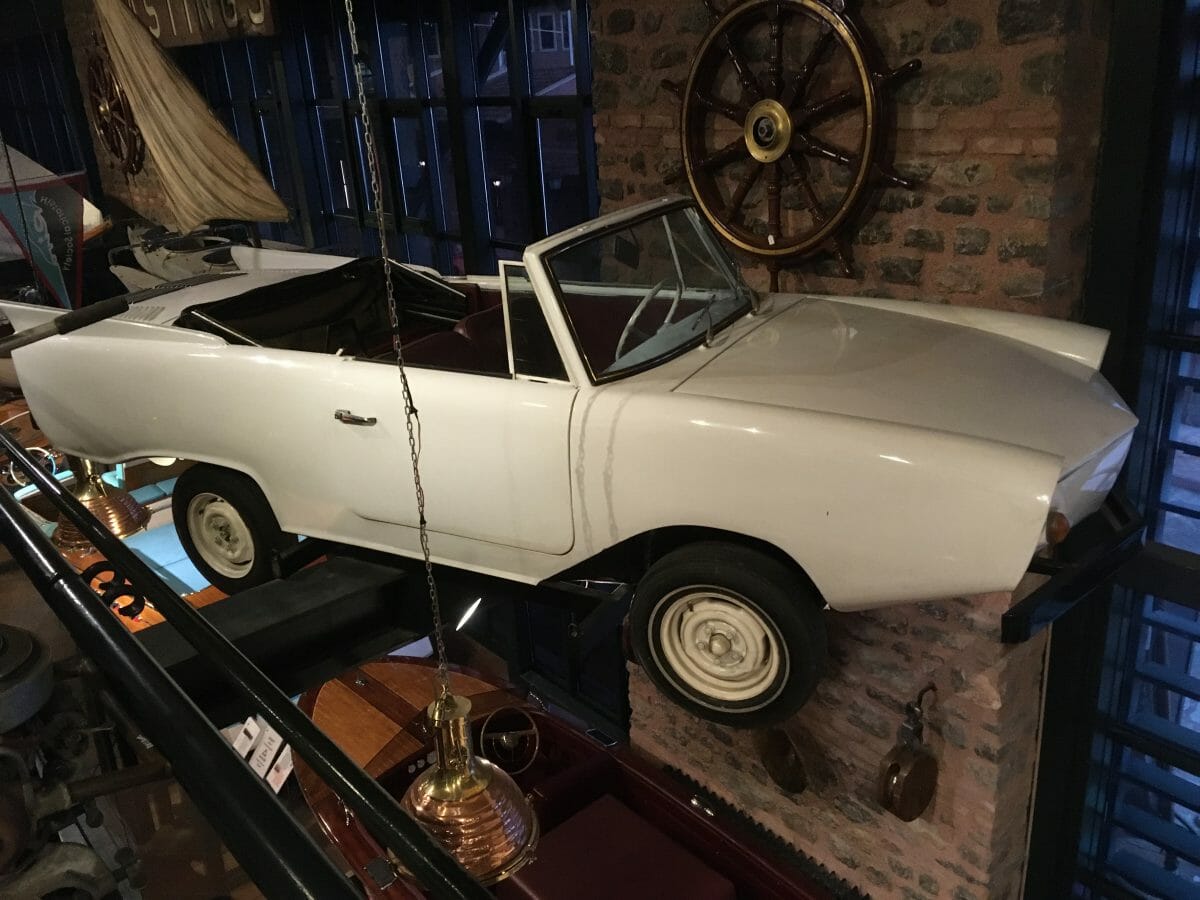 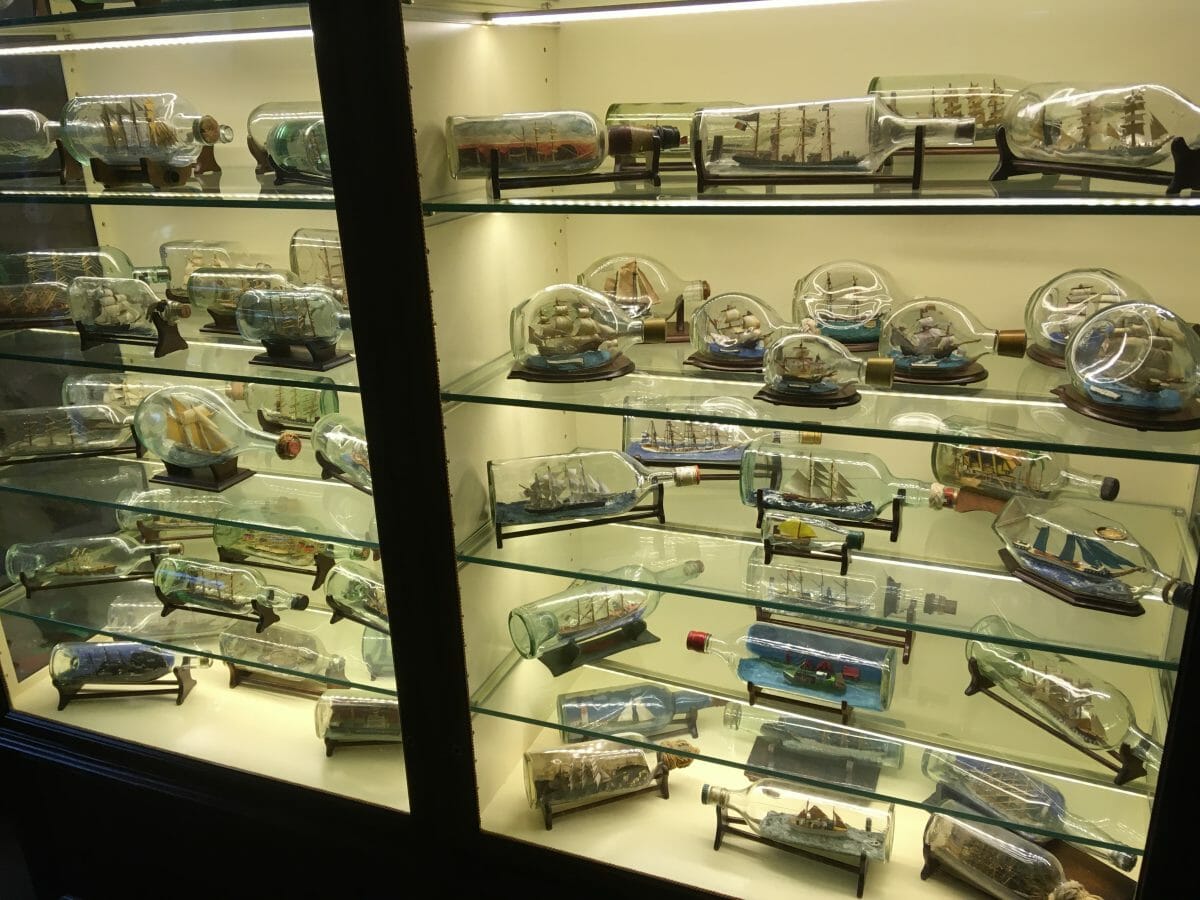 I’ve built two of these ships in bottles–taking hundreds of hours each.  Their “Pinch” bottle collection is second shelf right–a perfect fit for rigged schooners and I built the Tole Mour (collapsible) in one of these bottles.  My other one is the Virginia V which was literally constructed, piece by piece, in an olive oil bottle.  Someone put a lot of time in on this collection. 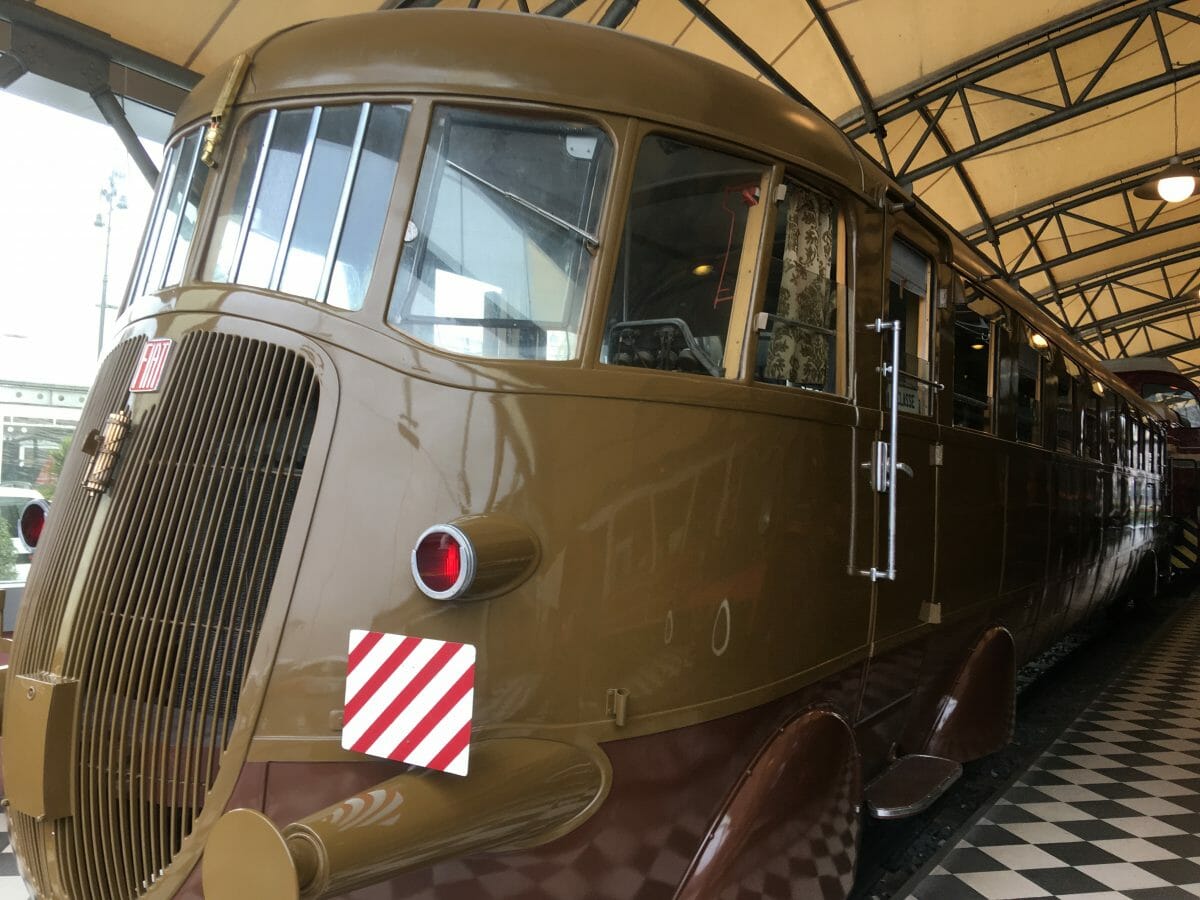 No museum would be complete without a 1937 Fiat Streetcar.  What a graceful carriage and it was just as cool inside! 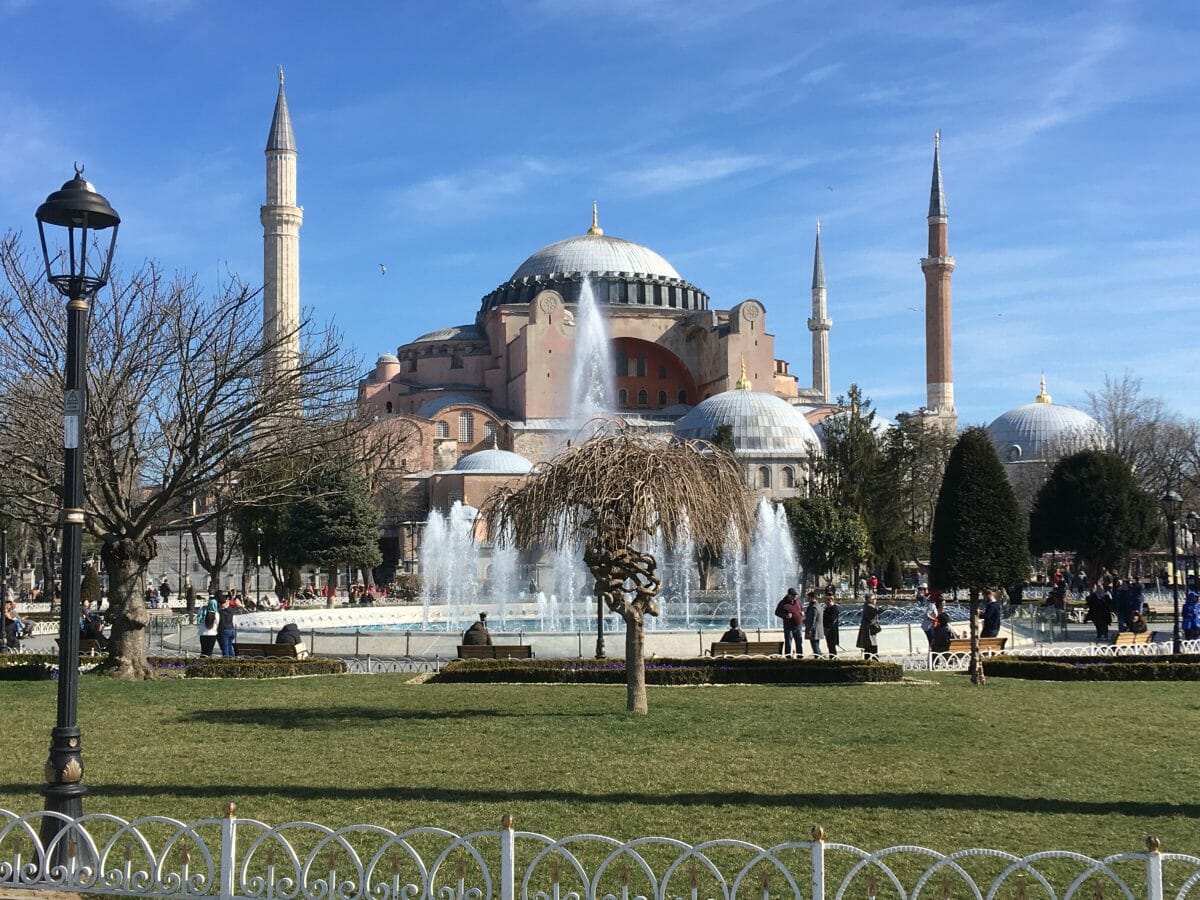 My first museum outing was on a perfectly sunny day–about 70F–so why not spend inside in a large dank cement building.  The Hagia Sophia, above will have to wait until tomorrow as I came primarily to see the Topkapi Palace….. 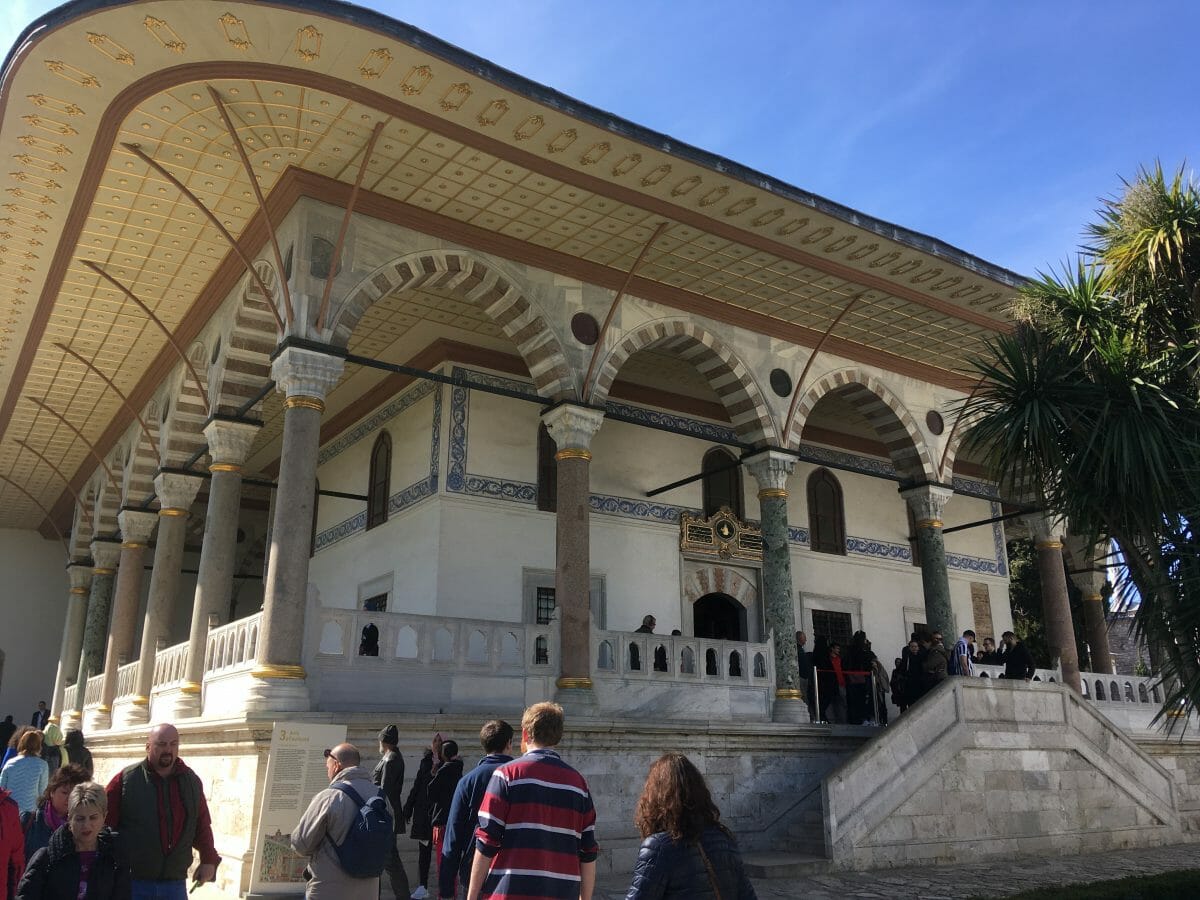 After seeing the 1964 movie, I’ve always wanted to visit here.  This is the sultan’s throne room–the palace is actually several open courtyards and smaller buildings–all quite exquisite. 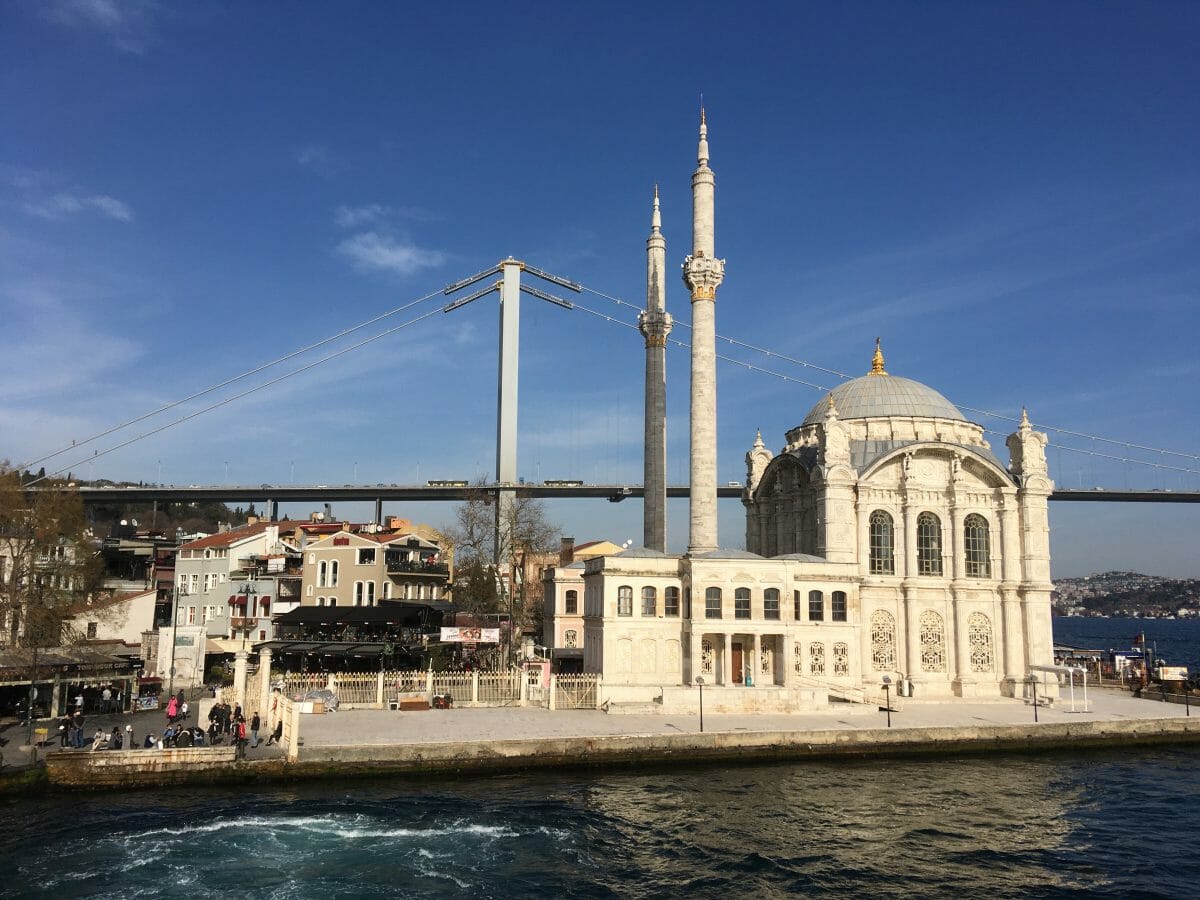 After my tour of Topkapi, I rested my legs (having walked back to the bridge crossing the Golden Horn (inlet).  To rest up a bit, I jumped on a ferry for a two hour ride up about a mile past the second bridge on the Bosphorus.  Very good way to get the lay of the waterways here and only $2!  That’s 12 Turkish Lira or tl).  Mosques are everywhere–this is the Ortakoy (with two dots over the “a”). 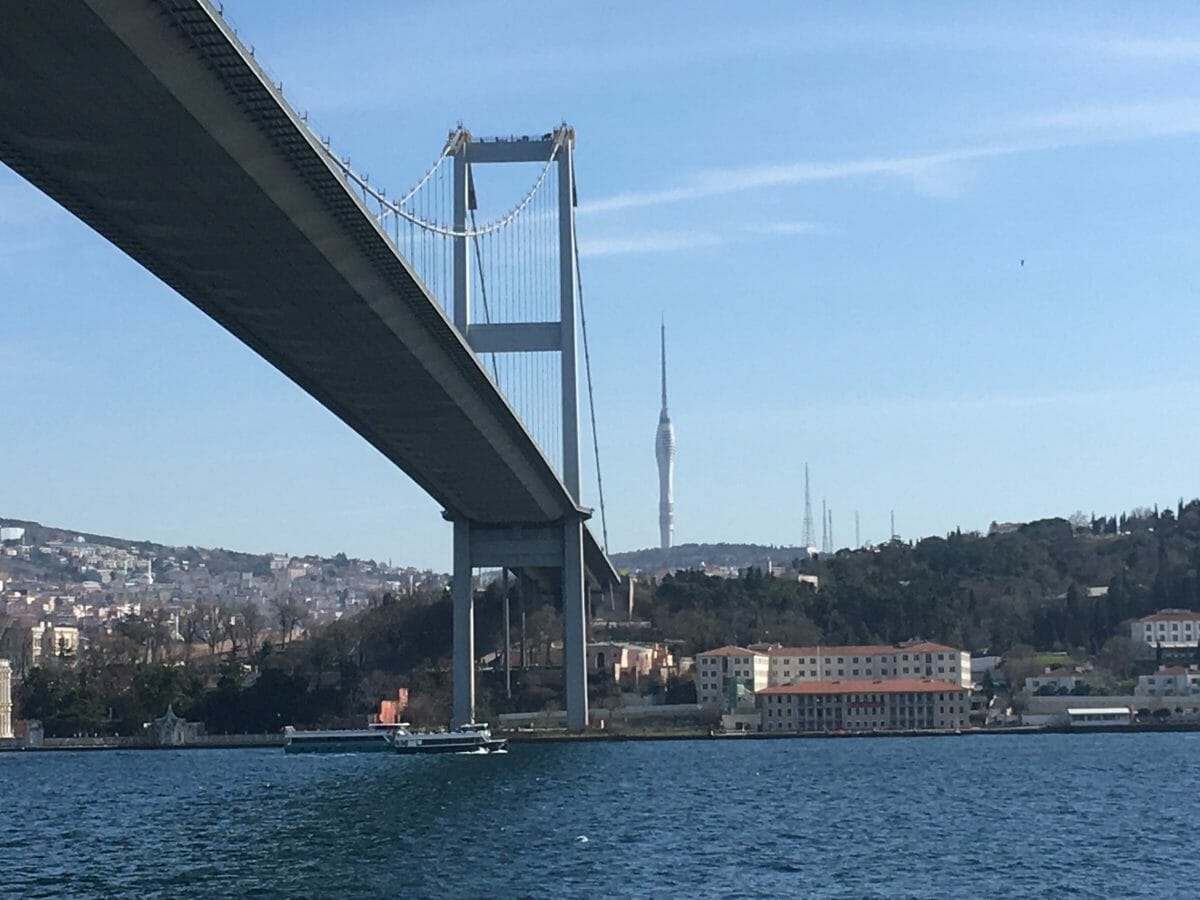 This is the first bridge we pass under–the 15 Temmuz Sehitler Bridge and is a whopper! 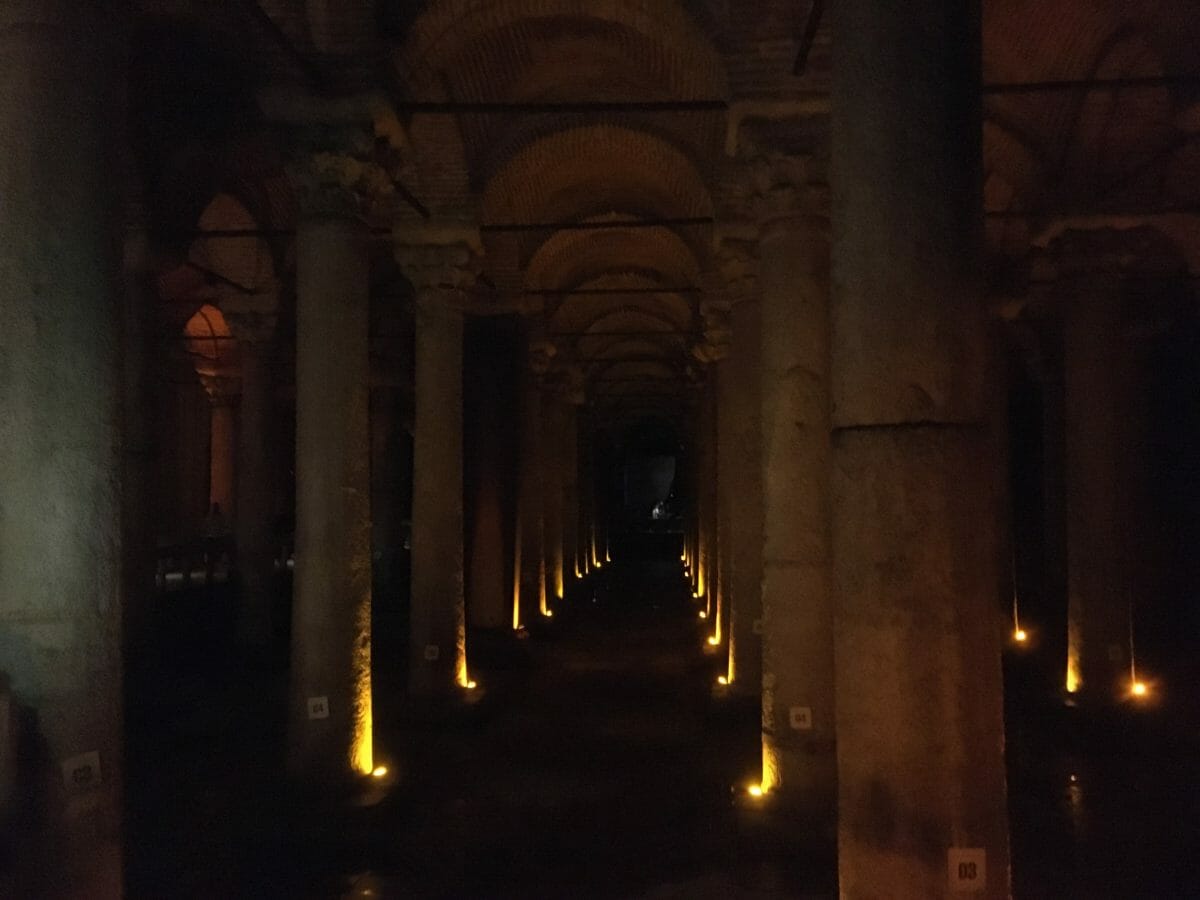 The very next day I’m back for the cistern visit–Istanbul, in the old walled city, built a cistern underground which was about 450′ long and half as wide–all supported by pillars that were recycled from old buildings….and I recall, using about 7000 slaves to build it.  Could you imagine the labor unions fighting over building this today?  (Recall the labor union disputes hauling the dirt away from Seattle’s newest underground tunnel which shut down the project for 8 weeks)……but I digress. 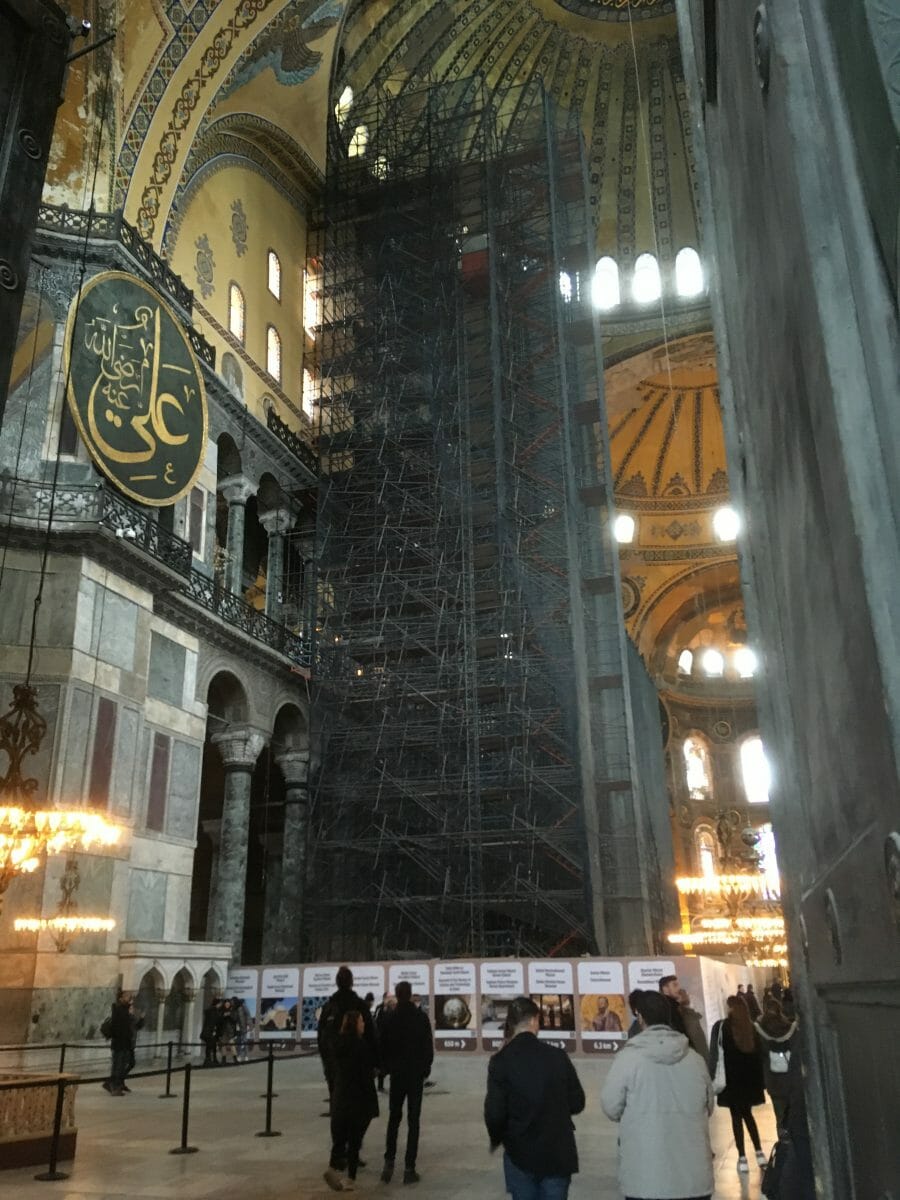 OK–here is the interior of the Hagia Sophia.  Basically the largest and earliest Christian Church built by Emperor Constantin when he Christianized the Roman Empire and moved headquarters to Constantinople.  It’s a remarkable coincidence that the name of this city has the same name…….   It has been both a Mosque and Church over the years. 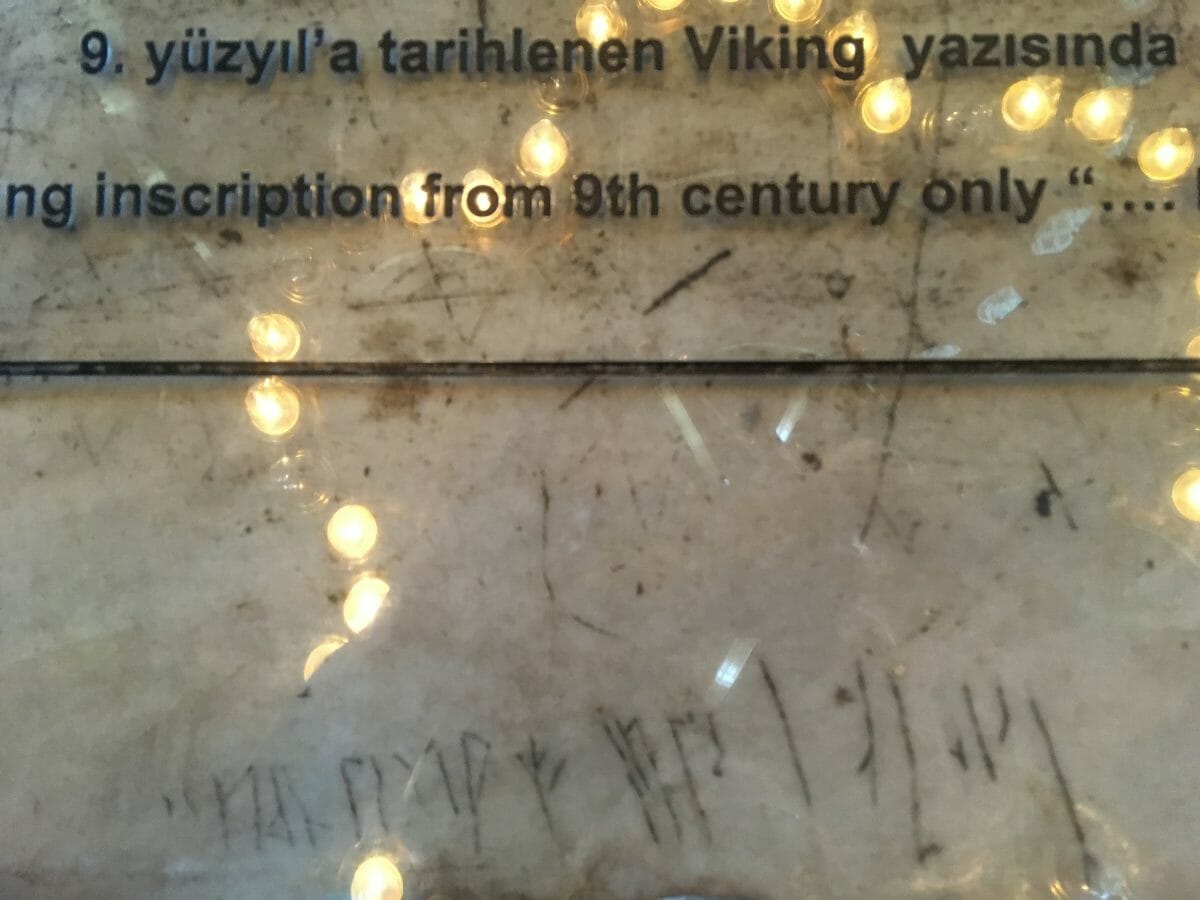 Even the Vikings occupied it!  And in the 9th Century–here is the name of Halvdan carved into the parapet in Runic.  A lot of other initials followed up until today with spray painted graffiti but don’t get me going on this. 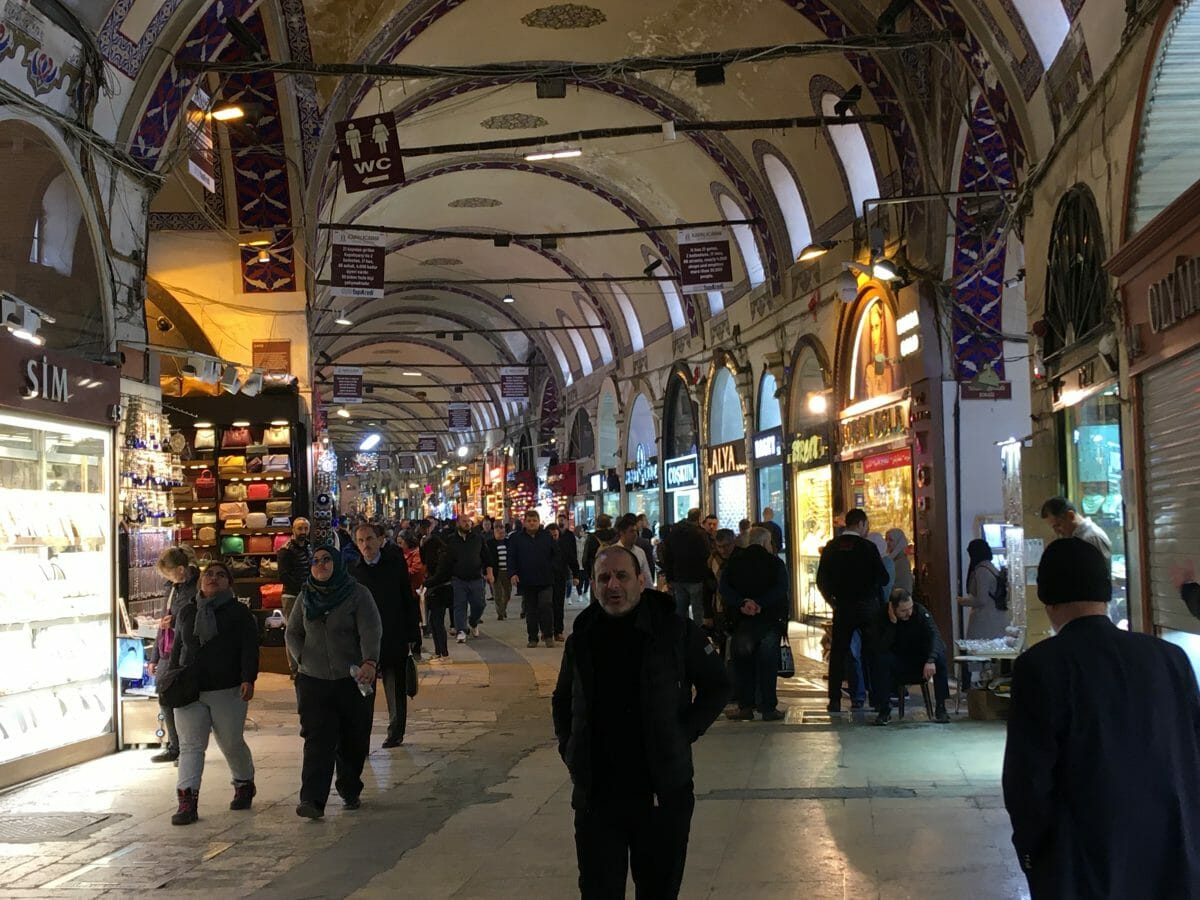 After the Mosque, it’s on to one of the largest outdoor markets in the world–the Grand Bazaar–although a lot of it is indoors.  It’s very much the Pike Place Market, except about 100 times larger–no kidding. 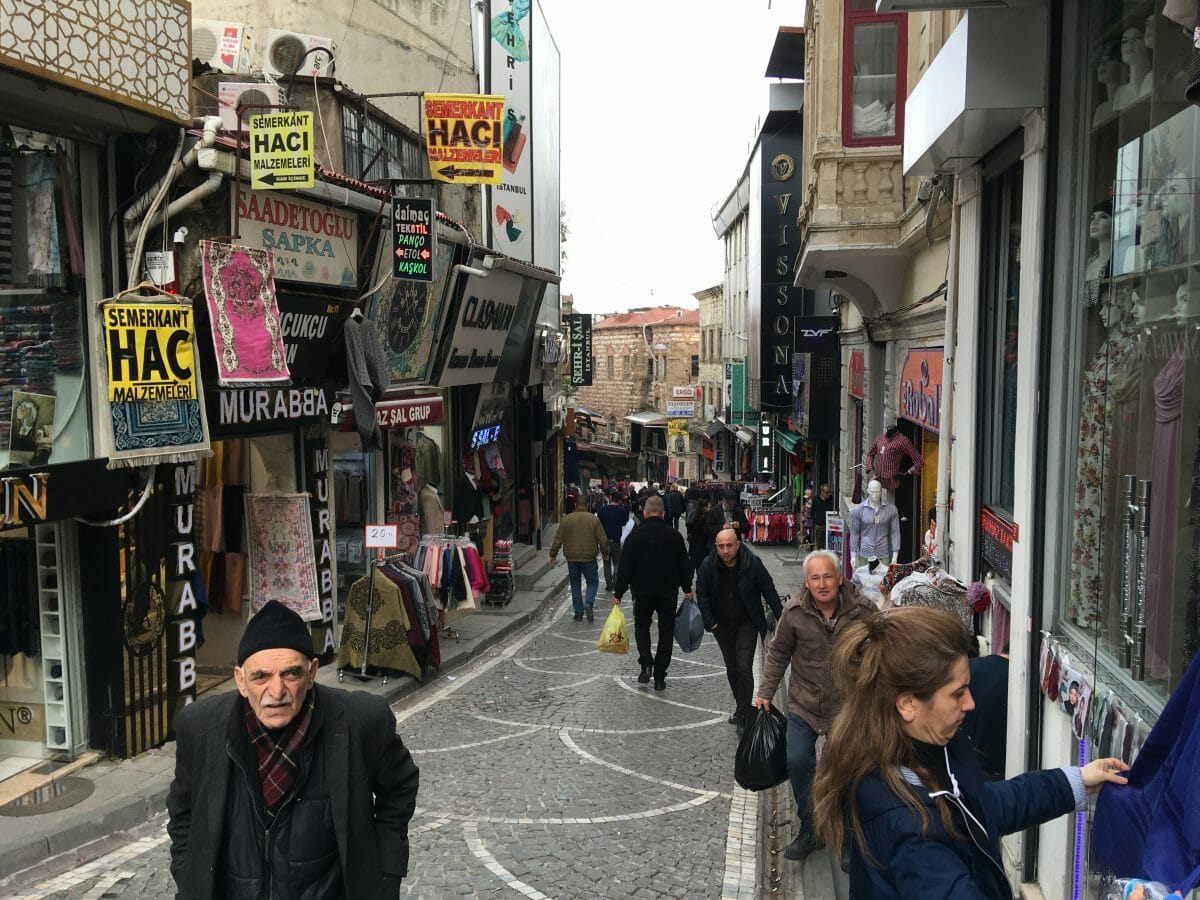 Some of the outdoor part….. 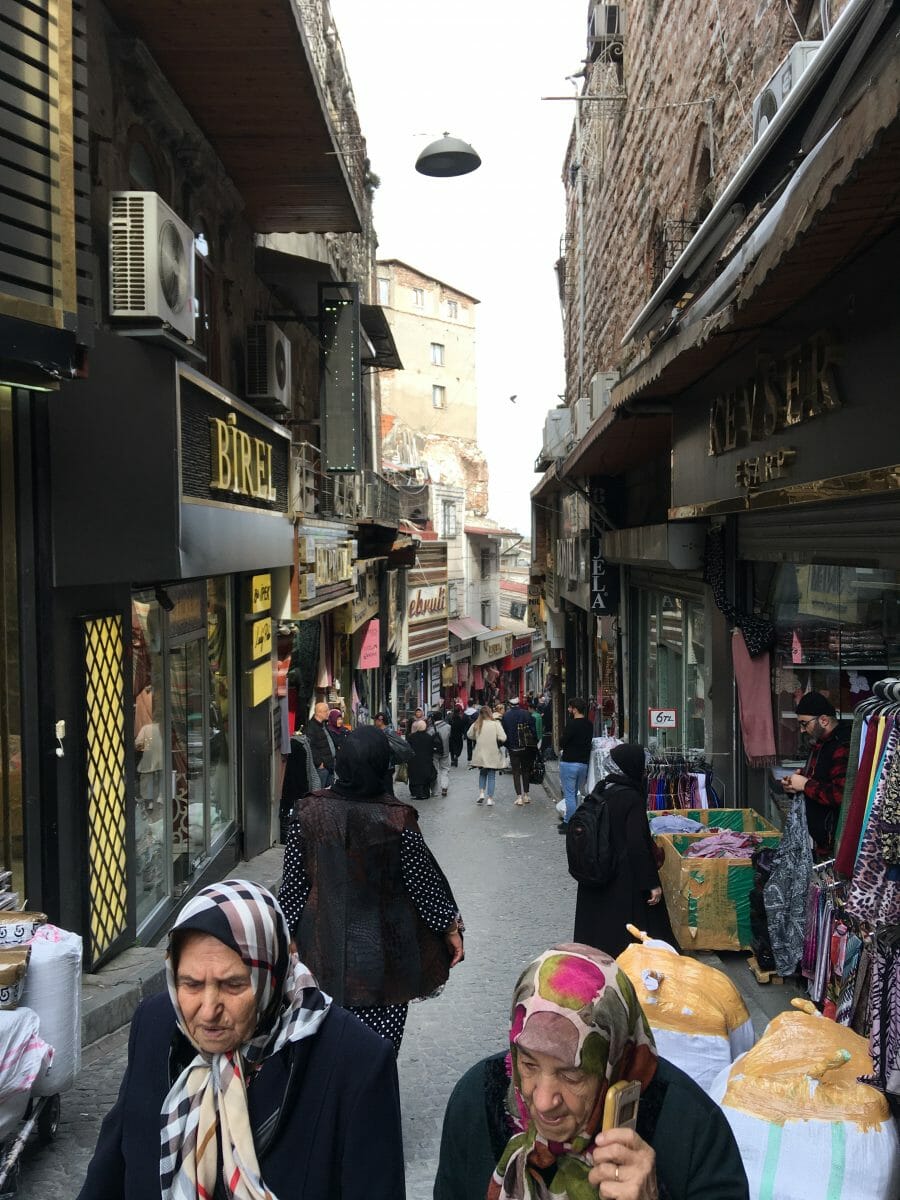 Note the cell phone…….everyone has one of these now!  Next post will be another train trip to Cappadocia!  Stay tuned!