Eastern Europe and other Gulag-y Places

The last push from Budapest to Istanbul isn’t an easy one and involves five separate trains not including the maze of undergrounds from Halkali to my destination in the center of Istanbul. The Man in Seat 61 lays it out pretty well but it’s hard to grasp the sequences of all the trains, transfers, border checks, etc.  So bear with me–the following description will perhaps aid someone in the future:

After collecting my booty at the farmers market in Budapest, I board the train pictured above–the Istar–or overnighter to Bucharest via Brasov.  This runs nightly leaving at 7:10pm from track #3 in my case–in the far corner of the Budapest train station–crawling with neck-tattooed thugs (see previous post).  The train is an old narrow-bodied Soviet built train dating perhaps in the 1950s?–I have no idea; but my first stop is the head and I’m not impressed–the toilet is full. 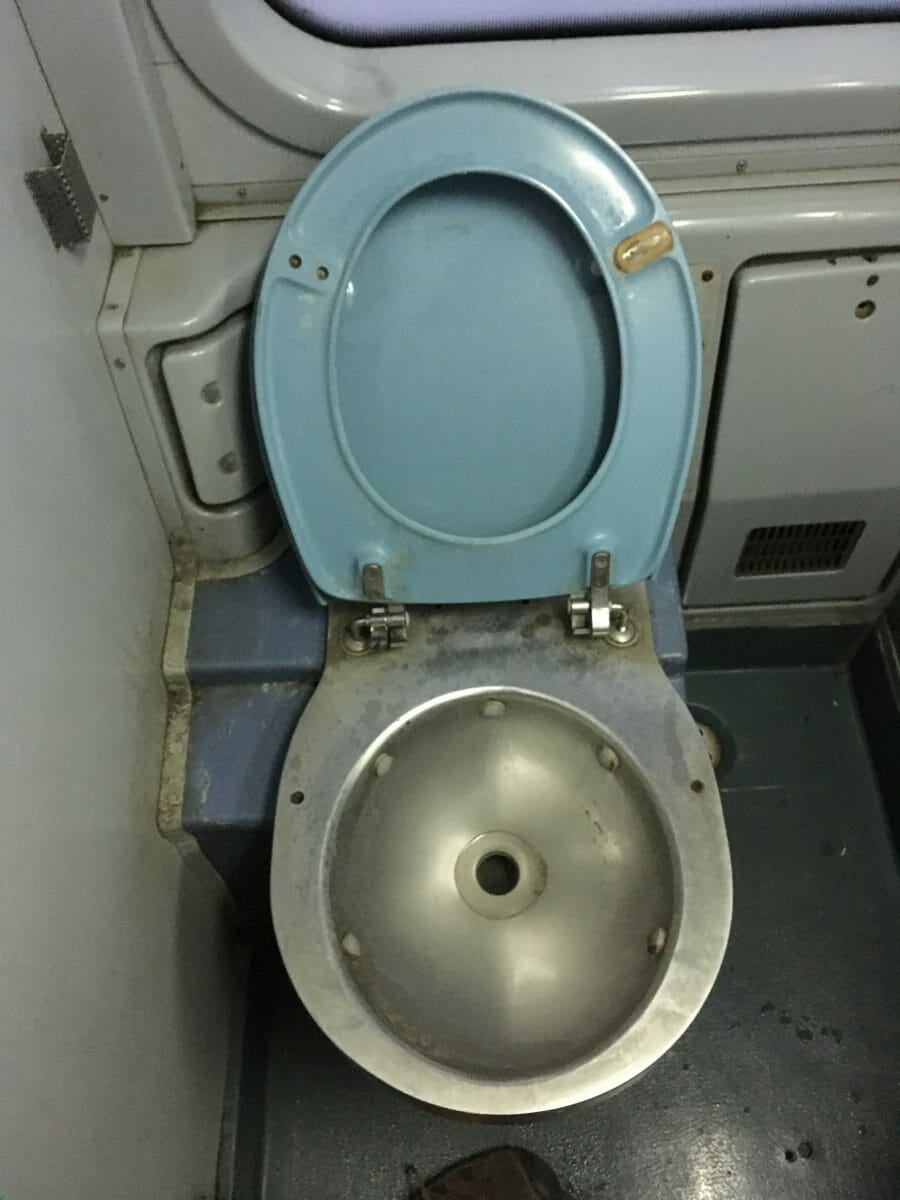 I am curtly told “Eeet Work.”  End of conversation.  Half the fasteners are missing even the lid isn’t bolted on.  “It works!” 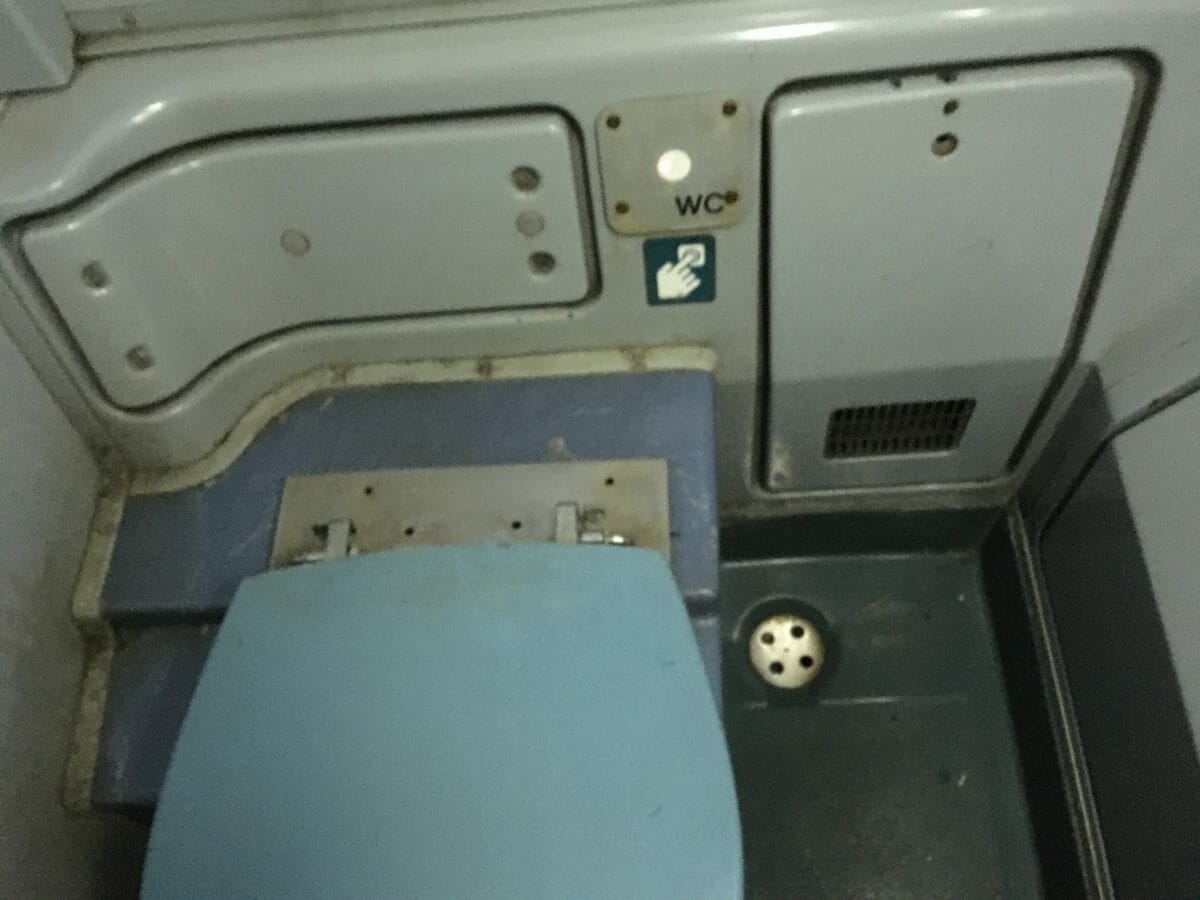 “Build it and they will come!” is not in the Eastern Bloc’s ‘Field of Dreams’ lexicon.  It appears they are trying to discourage tourism, not only by this equipment, but by their treatment of visitors.  The floors are likely rotten–they “oil-can” pucker when I walked on them–about 1″–I was afraid I’d fall through into the railroad ties flying by a few feet below. 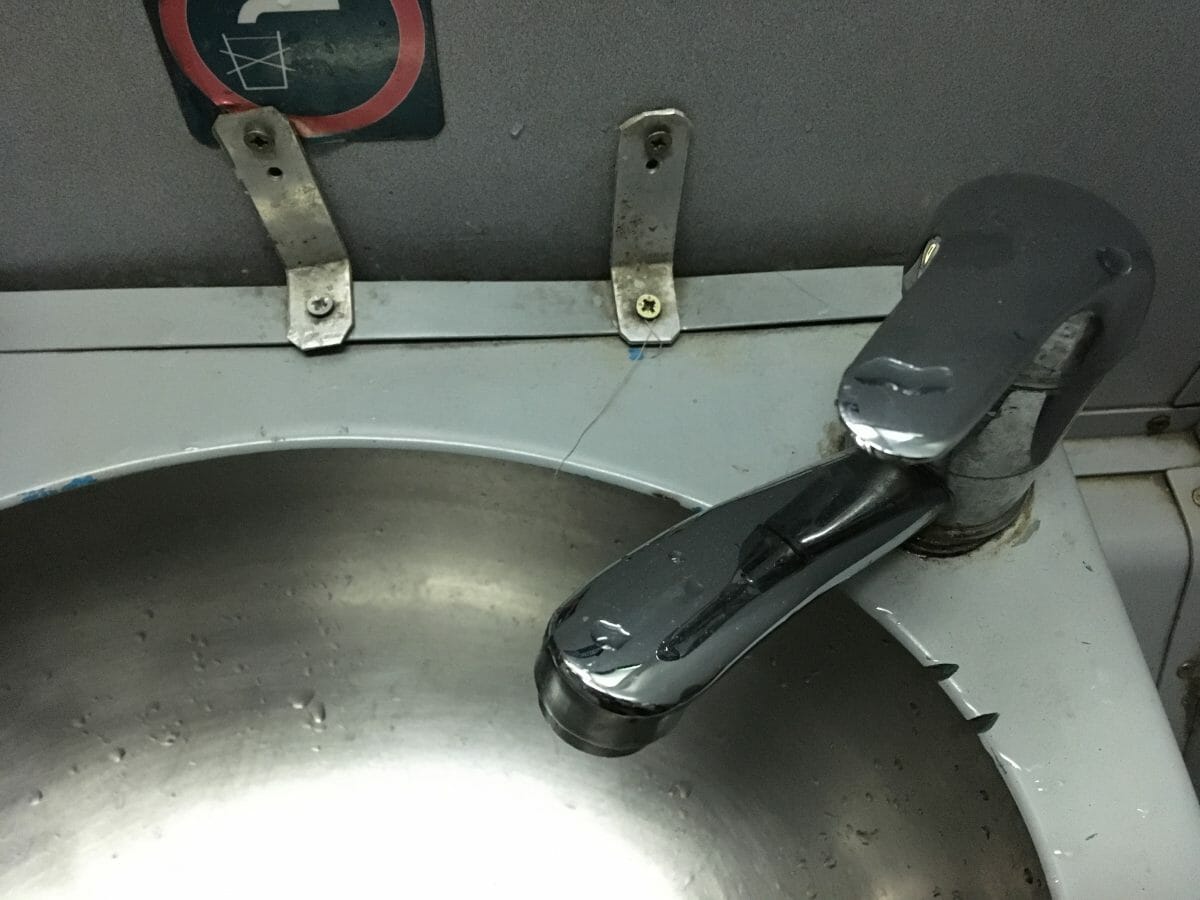 Here’s the sink.  OK–water comes out of the tap but you better not drink it.  C’mon folks–it’s 30 years since the wall came down and I’m saying if you build clean facilities and smile now and then, thousands of tourists would love to see this part of the world.  I persevere in my quest for some sort of light in the end of the tunnel…. 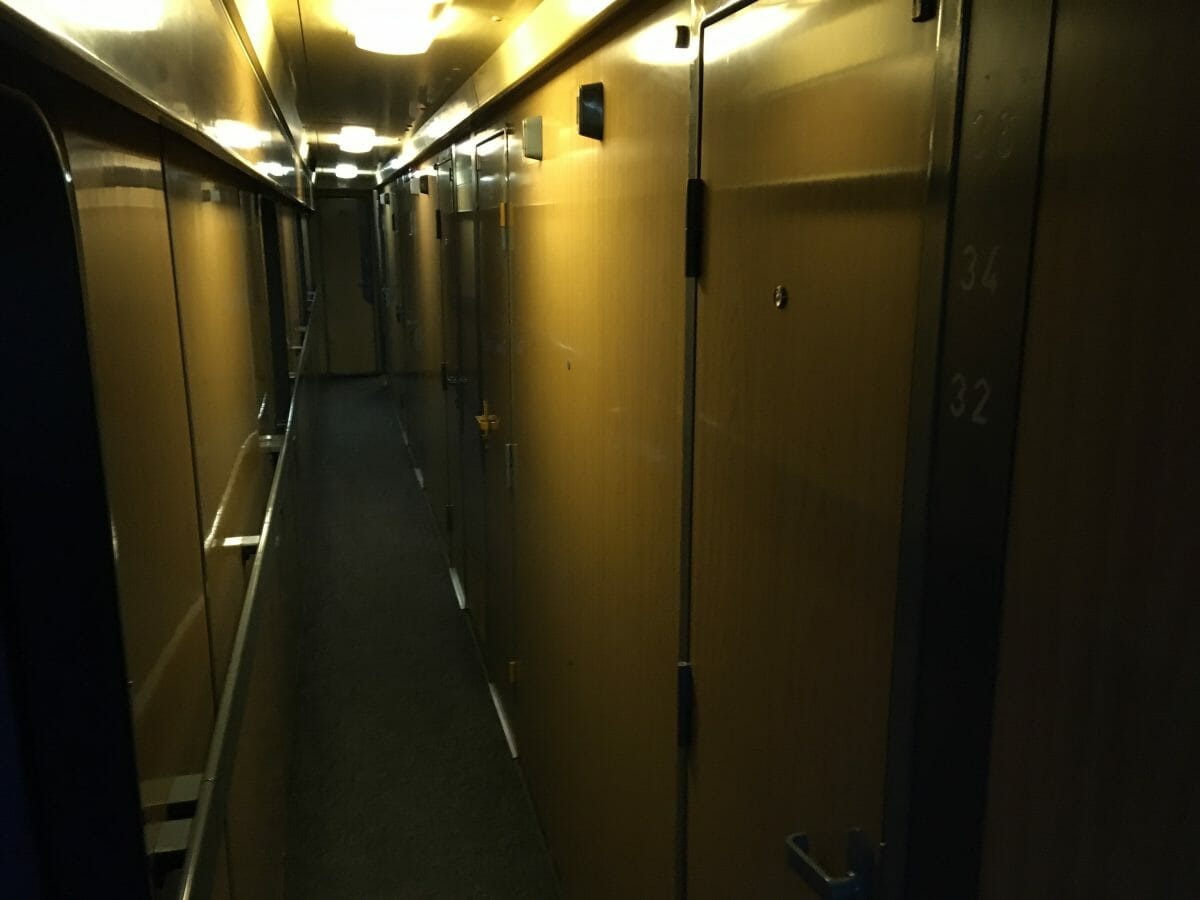 …..Nope, not here.  My room number (32) is written in felt tip pen.  I gobble down my sandwich and a small dessert I picked up earlier in Budapest and then a knock on the door occurs with a demand to see my passport.  I produce it without any issues.  I then retire up this precarious ladder intent to sleep…..my first ascent of this rickety ladder out of many more to follow…..keep reading. 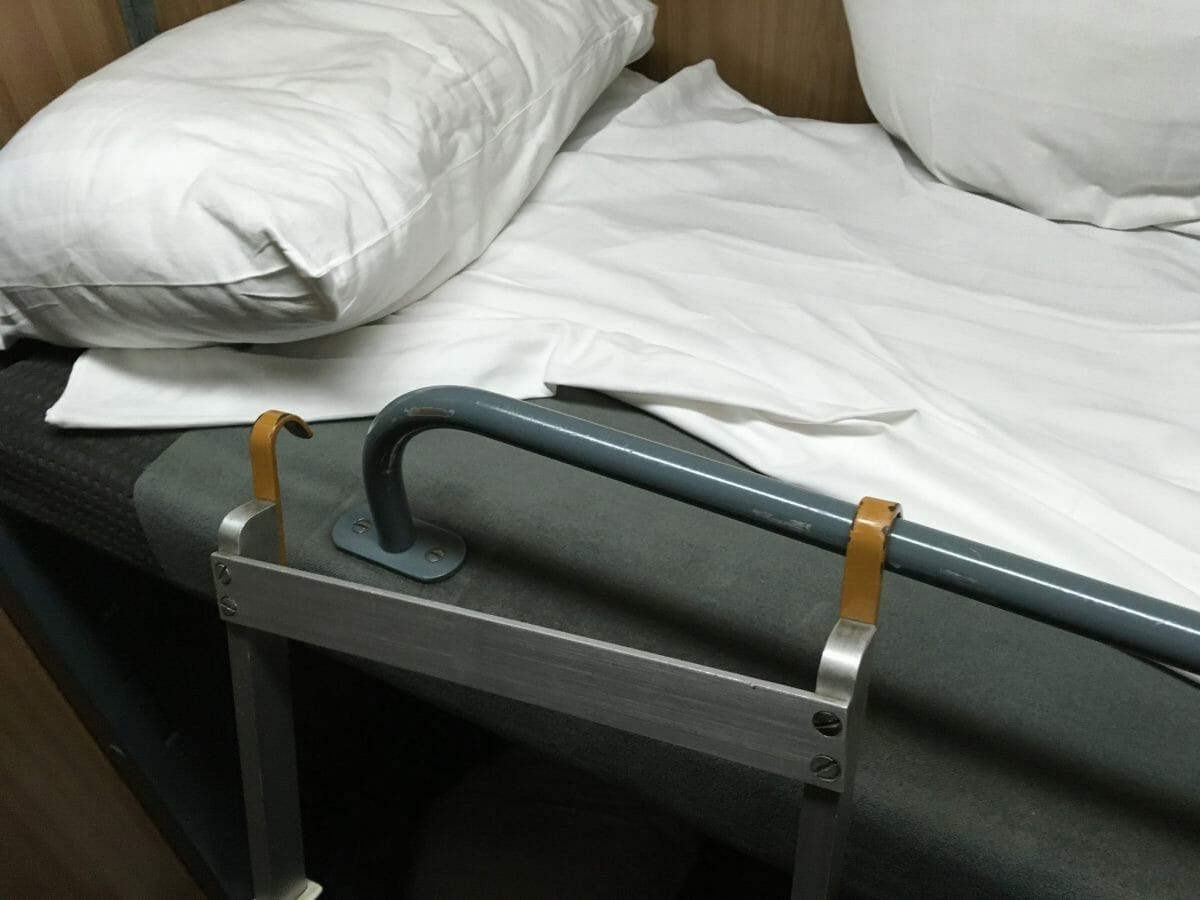 ….risking life and limb to climb into this bunk.  This is 5.8, A-4 in climbing parlance.  Note the fitted sheet–or is it a bath towel?  You get two of these and a pillow–that’s it.  The room is 85F–hot.  There are five light switches all interconnected so when one is turned off, another pops on across the room–brilliant Soviet engineering.  Now, I’m pretty clever with this kind of stuff having rewired three tugboats and two houses (and an emergency fire pump/bilge pump with two stations), but it takes me a full 30 minutes and about three more trips up this rickety ladder to figure out how to get the goddam lights out.  At about 11pm I stretch out and just nod off when there is another knock on the door:   “Passport!”  I must be in Romania.

I yell out over the noise of the train that I showed it an hour ago and that I’m in bed.  “This is Romania!”  I climb down the rickety ladder for a 5th or 6th time (note this slips sideways radically without warning).  I crack the door and this “Uborshitza” (Russian for huge cleaning women with a large wooden club) rips the door wide open, me in my boxer shorts and nothing else; and face a total of four women peering at me.  Bear in mind, that after four months of travel without shaving or a haircut–I resemble something between the ghost on the Shroud of Turin and Forest Gump, late in the movie.  When I protest, she says “Eeets OK.”   Well, no it isn’t.  Finally she gives me back the passport and says to have a nice visit–to which I shoot her a stinging reply, “it gets better every minute.”  She stops abruptly and gives me a cold stare.  I guess there will be no more room service for Doug.

I finally drift off to sleep, well sort of.  It’s still 85F temp in the cabin so I go down (trip #7 & 8) up and down this ladder and figure out how to wrench the window open–and succeed!  Good old Soviet technology–open a window to cool the room down.  But the blind wants to shut the window so after climbing back into my bunk, I learn how to wrap my toes behind this curtain and hold the window open cooling my foot (it’s about 40F outside) and also being able to modulate the temperatures.  I wonder what people think where the train pulls into the several stops along the Romanian countryside, with a foot protruding out the window?  I arrive  in Bucharest about noon and take room at the Ibis which is a block from the train station and about $50 Euro.  After checking in, I grab a round-trip ticket on the subway and cast my fate to the wind and jump on.  Locals guide me to the Old Town–except no one knew where Old Town was.  And when I found it, I was underwhelmed……. 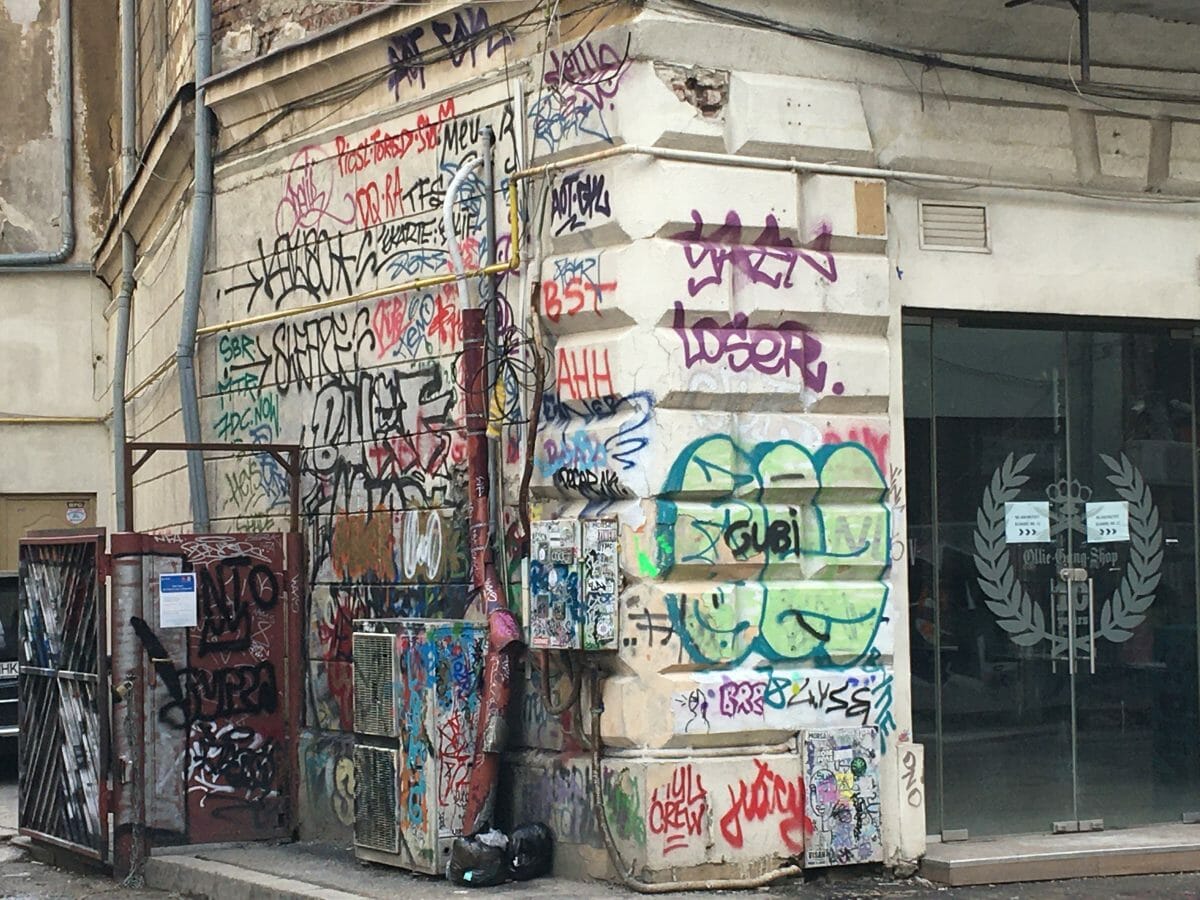 …..and returned back to the hotel to retire for the evening and contemplate graffiti:  1.  What does all the paint cost?  2.  What type of person can afford this?  2.  Why do it in the first place?  3.  Cost of removal world-wide? 4. Do they ever arrest anyone for this?

At 73, I’ve figured out most of life now, including super strings and even quantum mechanics but I cannot figure out this graffiti stuff and also……how tire marks get 10′ up the sides of the old Battery Street Tunnel in Seattle.  Life’s persistent questions.

In the morning, I walk around the block and find a beautiful little deli run by two Romanian women and they are delighted to sell me anything; again no restaurant cars in the future.  I find my coveted apricot nectar that my “sister,” Veronique, makes at Le Degoutaud (my French Connection–although not her brand), add two bottles of water and a bottle of red Hungarian wine–in all it comes to $4.60 USD.  I’m beginning to wonder what this wine will taste like–the water, I’m not so concerned……

The first train is a simple two-coach blue tram that runs from Bucharest to Russe; more like a fancy bus on a train carriage. 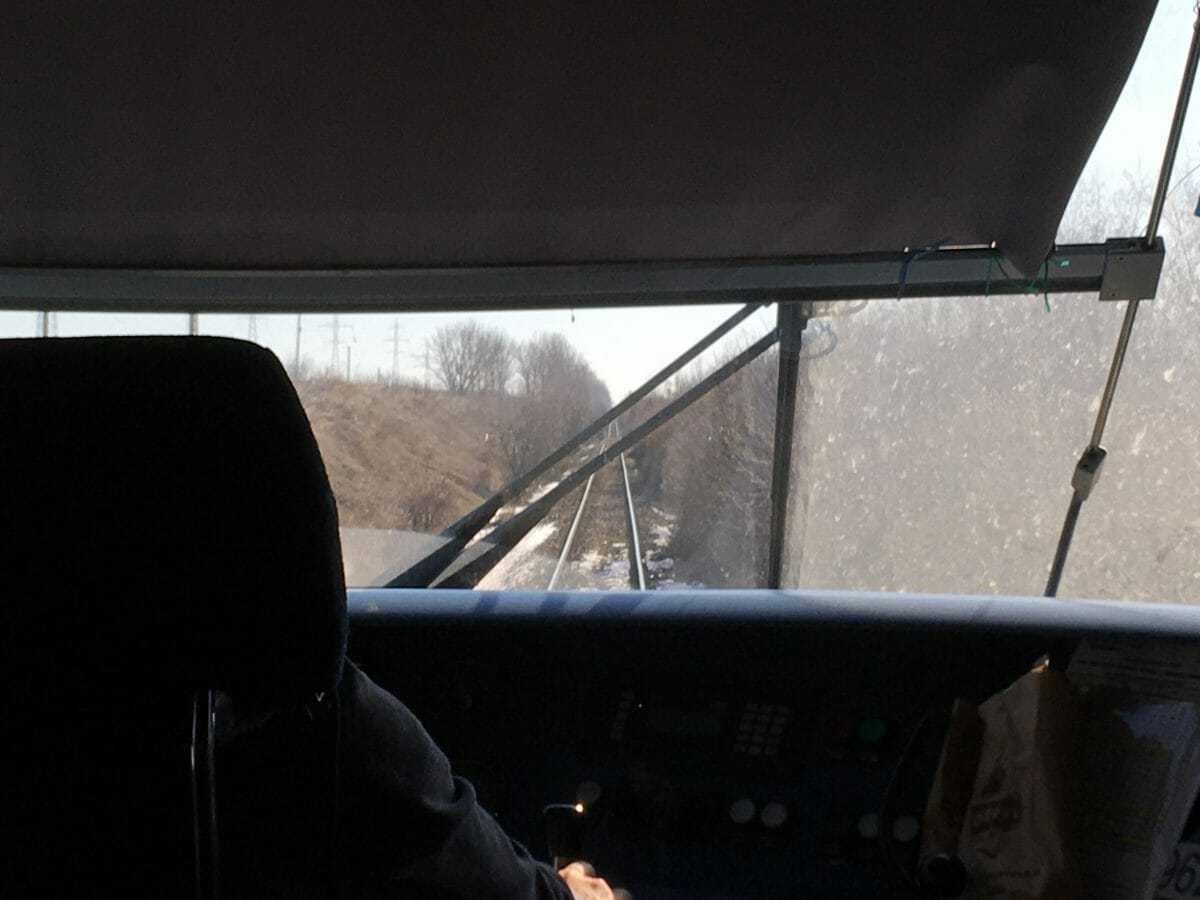 It’s narrow gauged track.   I’m assigned a seat (strictly!) next to a young Finnish woman who is both a Swedish and English teacher–languages that are mandatory in the Finnish school system.  She is also bound for Istanbul but has elected to visit Sofia first–a detour upstream to my connections.  Sitting directly across from us is…….”The Scottish Sneezer,”  just back from Wuhan, China I’ll bet!  Damned the seat assignments–I get up and move to the front of the train and take the above photo of the Romanian countryside. (I got sick as a dog sitting next to a sneezer in Scotland who atomized a whole train car–took me 6 weeks to get over that one.  Living alone on an Alaskan island doesn’t not keep the immune system up to snuff, so to speak) 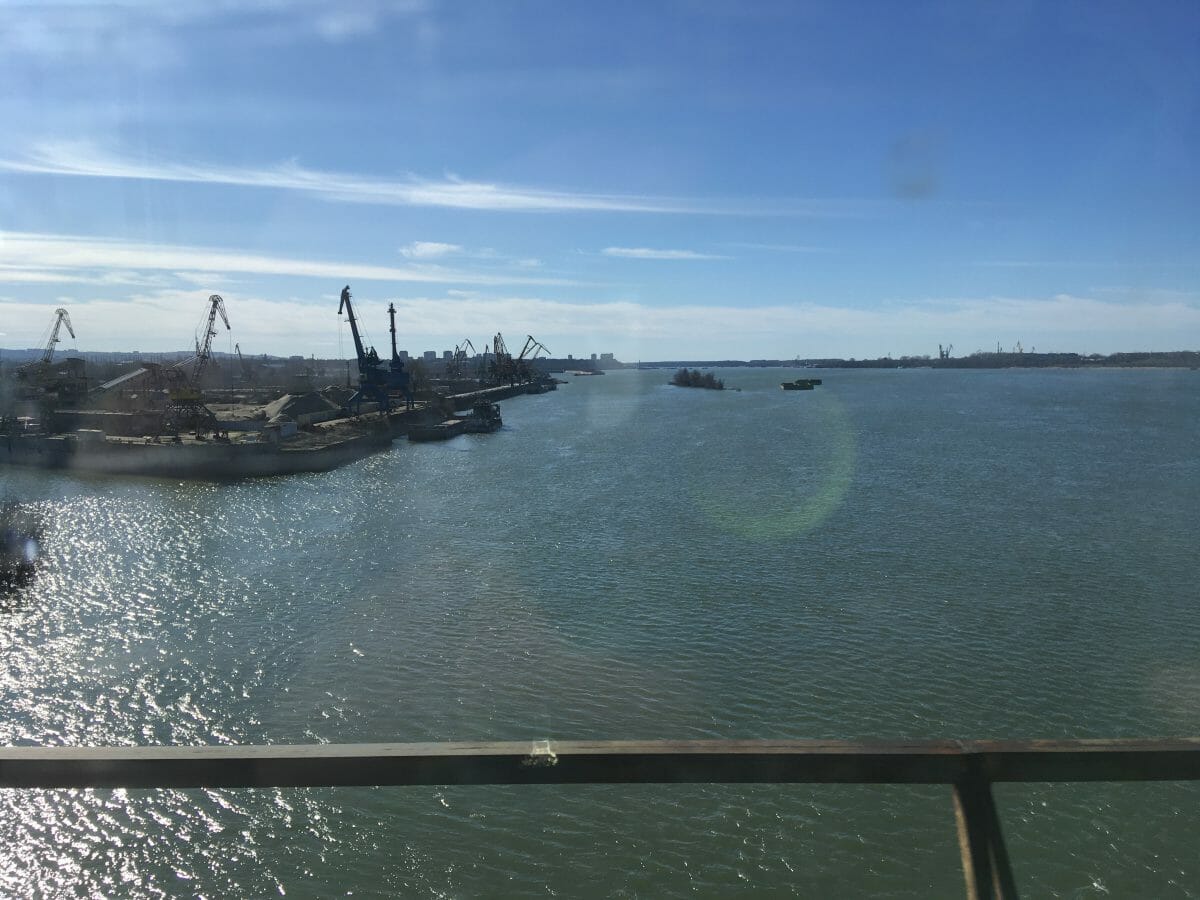 Crossing the Danube River (again) from Guirgui, Romania into Russe, Bulgaria, we train across the longest riveted steel bridge in Europe at 2.5 kilometers:  the Giurgiu-Friendship Bridge.  No silver rivets in this one.  I disembark in Russe and catch the next train to Gorna Oryanovitsa. 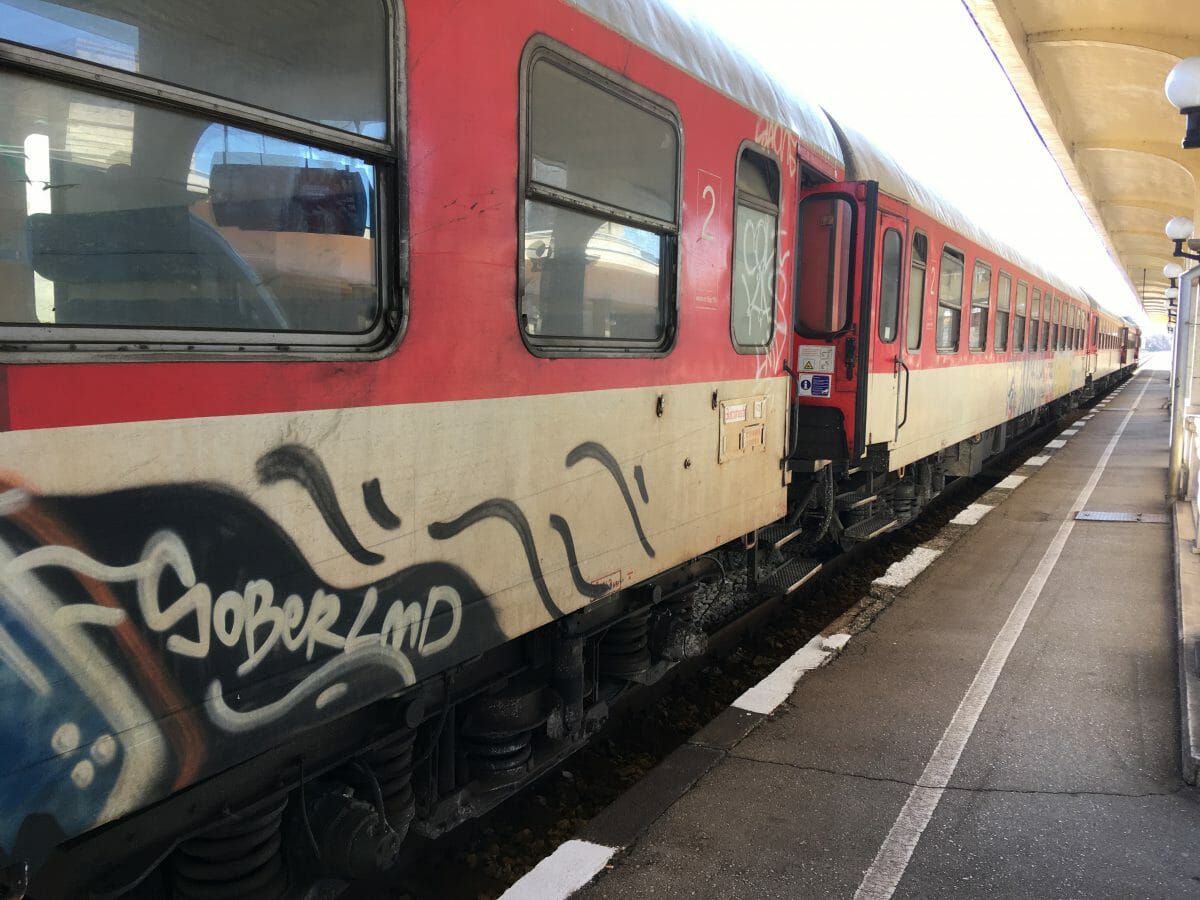 The trains just keep getting better and better; this one with a custom paint job leaving Russe (14:15) arriving at Gorna Oryanovitsa (16:10).   It is on this train that I meet up with about 5 or 6 other travelers all bound for Istanbul.  A medical student from Germany taking his orthopedic residency in Tablisi, Georgia, a couple from France taking a ski adventure through Iran, Tajikistan, Turkmenistan and Uzbekistan ending in Shanghai this fall.  And another traveler, a professional slack-liner– who had been to Istanbul before.  We group up in one car and compare notes and there are no shortages of talking points. 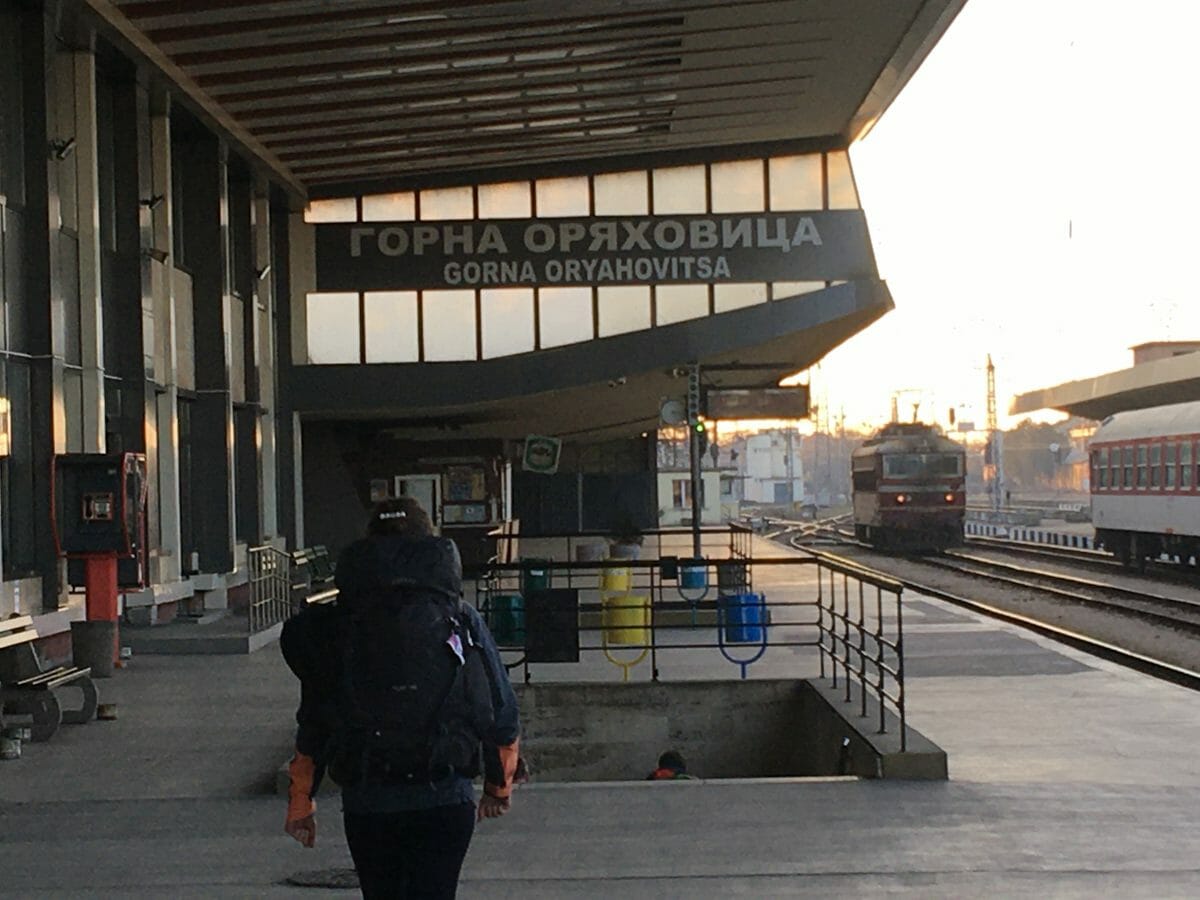 The train station in Gorna Oryanovitsa–the medical student and I walk about town.  We depart Gorna  (17:30) arriving Dimitrovgrad (21:51).  That’s 10 o’clock in the evening. On this train, we again all group up and have dinner. 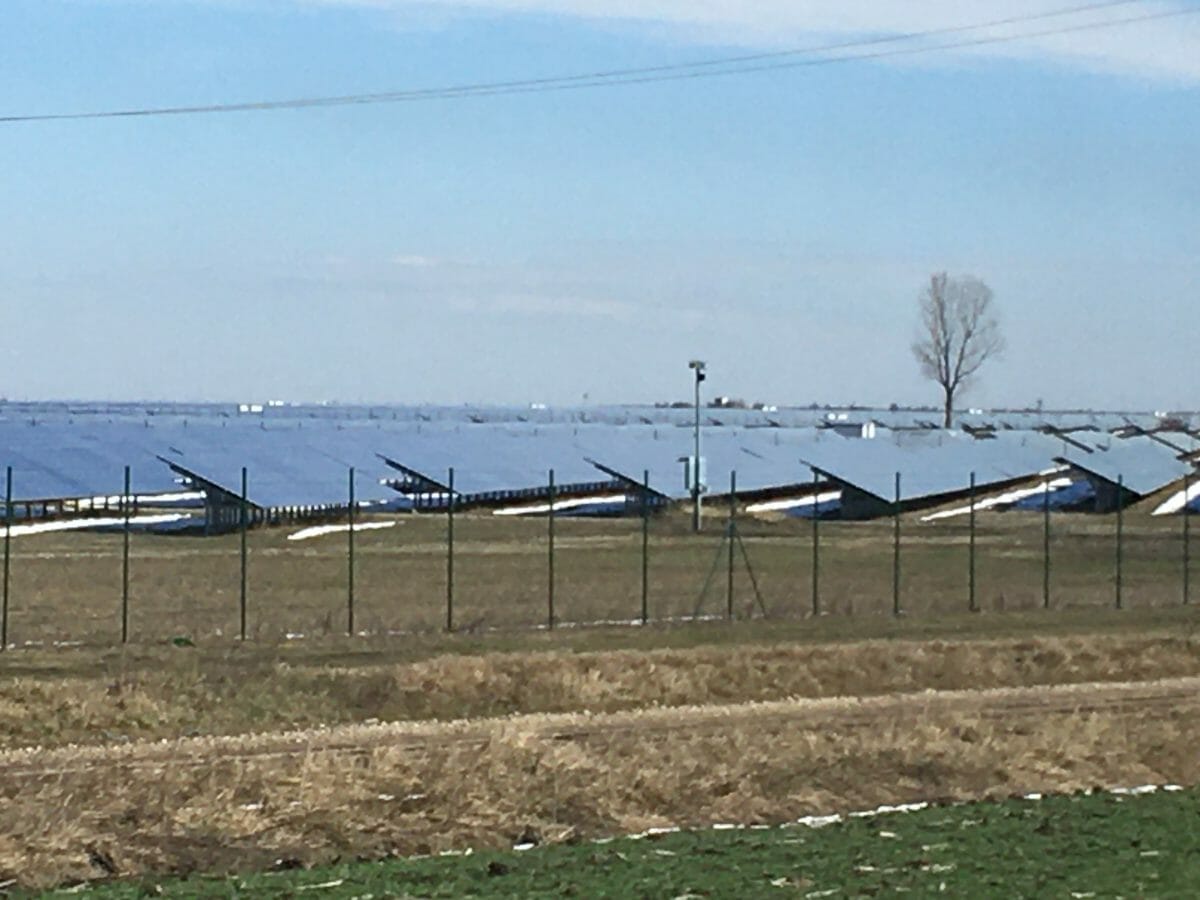 Two things that really surprised me in Southern Bulgaria;  solar panels were in use in large arrays and that I had 4G internet the whole time–hotspotted off my cell phone. 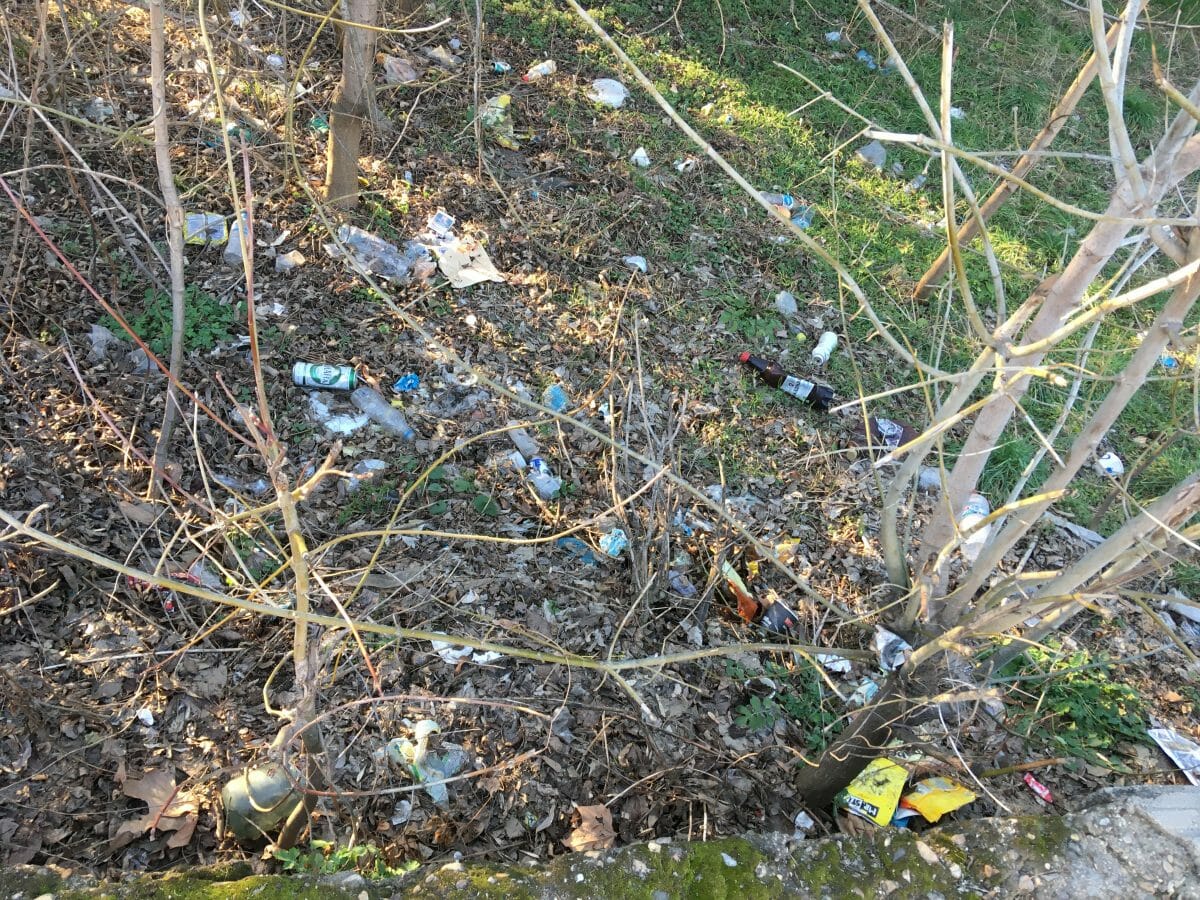 And one thing that didn’t surprise me is the litter–which is abominable–with plastics now deposited into the geologic record, recording our bad habits over time.  Future paleontologists will have a field day with this horizon; if any survive.

We arrive on schedule in Dimitrovgrad and switch to the Sofia-Istanbul Express–in our case east bound which leave within 40 minutes.  Bunks are available but the catch is, if you want a private room, you have to purchase all four bunks (there are plenty of empties this time of year).  The good news is that they’re only $10 Euros each.

The aggravating thing is that when the train reaches Kapikule (01:32) one must get off with all luggage to be x-rayed and produce or purchase a Turkish visa and get your passport stamped.  Then it’s back to bed–at 2:45am.  After barely drifting off to sleep, my cabin gets a horrible stench which wakes me up yet again first with a horrible stale tobacco breath smell, which morphs into vomit, yet again to baby-diapers and finally to a musty wet rug smell, then the cycle repeats.  Absolutely horrible.  I wrench open the window again and endure this for another two hours, finally giving up an hour out of our final stop in Halkali (25 km outside of Istanbul).  It’s 5am but I gain an hour time zone–so I’ve only 20 minutes before arriving.  I can’t wait to get off this train.

To shorten the narrative of this “night from hell” one of the traveling companions (“Papuchiki” in Russian) purchases each of us a metro pass for the Mamaray–the new Turkish commuter train–which runs from Halkali into central Istanbul–after an hour of deciphering the ticket dispensers which take only exact change in Turkish Lira.  An English teacher helps me transfer and arrive at the Taksim Station and I finally surface like a blinded mole in the Istanbul sunrise.  I’ve arrived!