The Bridges of Budapest

There are about a dozen bridges spanning the Danube River here in Budapest.  I didn’t know this as I trained into town but I was soon to learn.  From Venice, it was an all day trip to Vienna–arriving about 5pm.  I grabbed a room at the Motel One or some such memorable brand–a block away from the train station, which was under $50Euros and clean.  But…..you had to pay for everything up front.  To buy a drink at the bar, I had to walk back to my room to get my cash (no cards).  The next morning I went down to purchase the breakfast which was stripped off my reservation by using Bookings.com (this is a bad website, in spite of the Man in Seat 61’s recommendation); cash in hand and was told that I would have to go upstairs again and pay at the front desk and bring town a receipt……   I checked out.  I walked over the the train station five minutes away, bought a cup of coffee, a croissant and was on the train an hour earlier than I had planned–trains to Budapest run every hour.  I should have trained directly to Budapest, but it would have cut into the 5 o’clock cocktail hour and we can’t have that!  And besides 10 hours on the train was enough for one day. 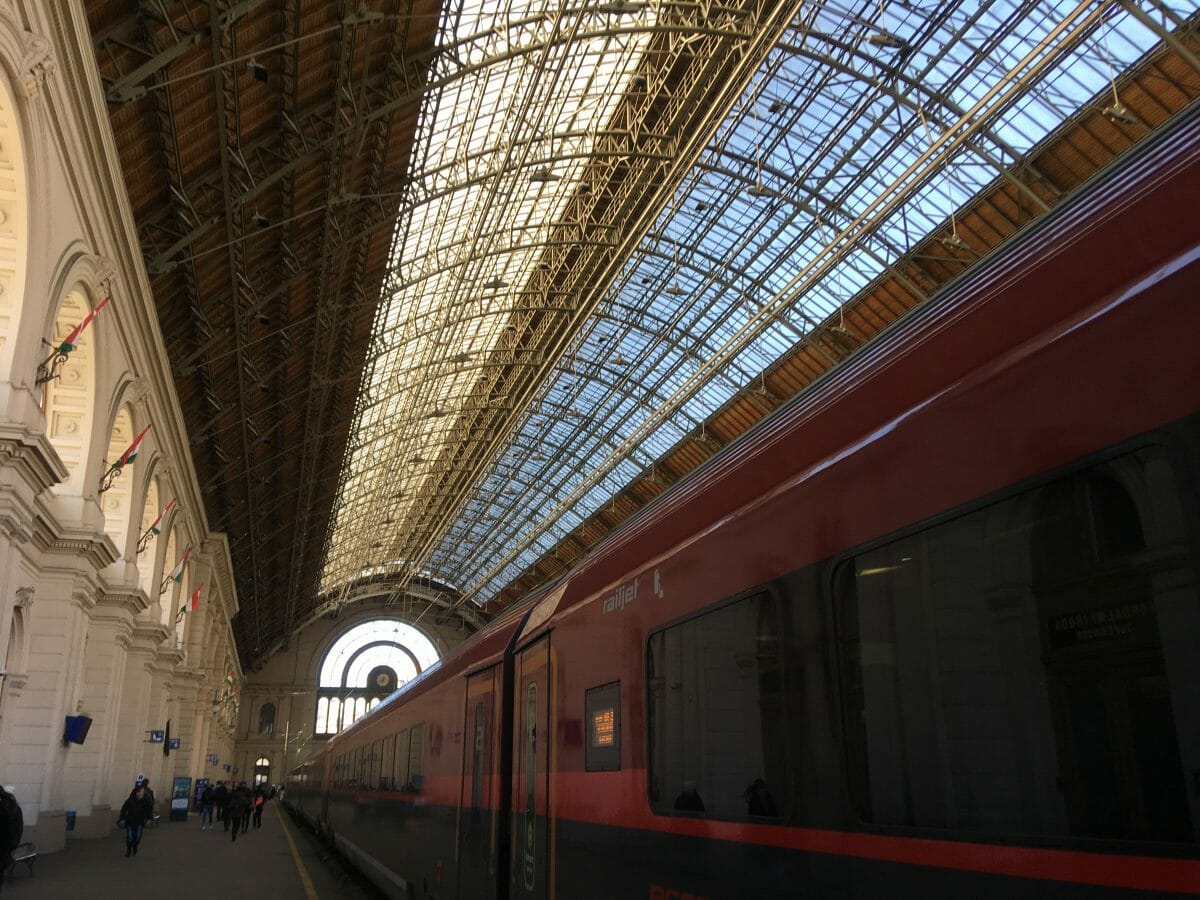 Arriving in Budapest is a quantum leap back into Soviet history.  At the cash machine, I was immediately hassled by three thugs who looked like Bosnian prisoners of war with shaved heads and neck and face tattoos.  They failed to recognize the stoic countenance of an ex-ranger expertly disguised beneath the facade of Filson and Carharrtts with a suitcase in tow.  They also failed to note the motto on my baseball cap–“I Ride With Ranger Doug.”  They were dealing with the wrong guy. When one jumped in and started pushing buttons, I grabbed the money, then the receipt, and with alacrity, ran to the police station–50′ from the cash machine.  Obviously, these guys didn’t have much in the planning department.  In all, I only withdrew $42.00 USD.  Well, I better spend it before I leave Hungary. 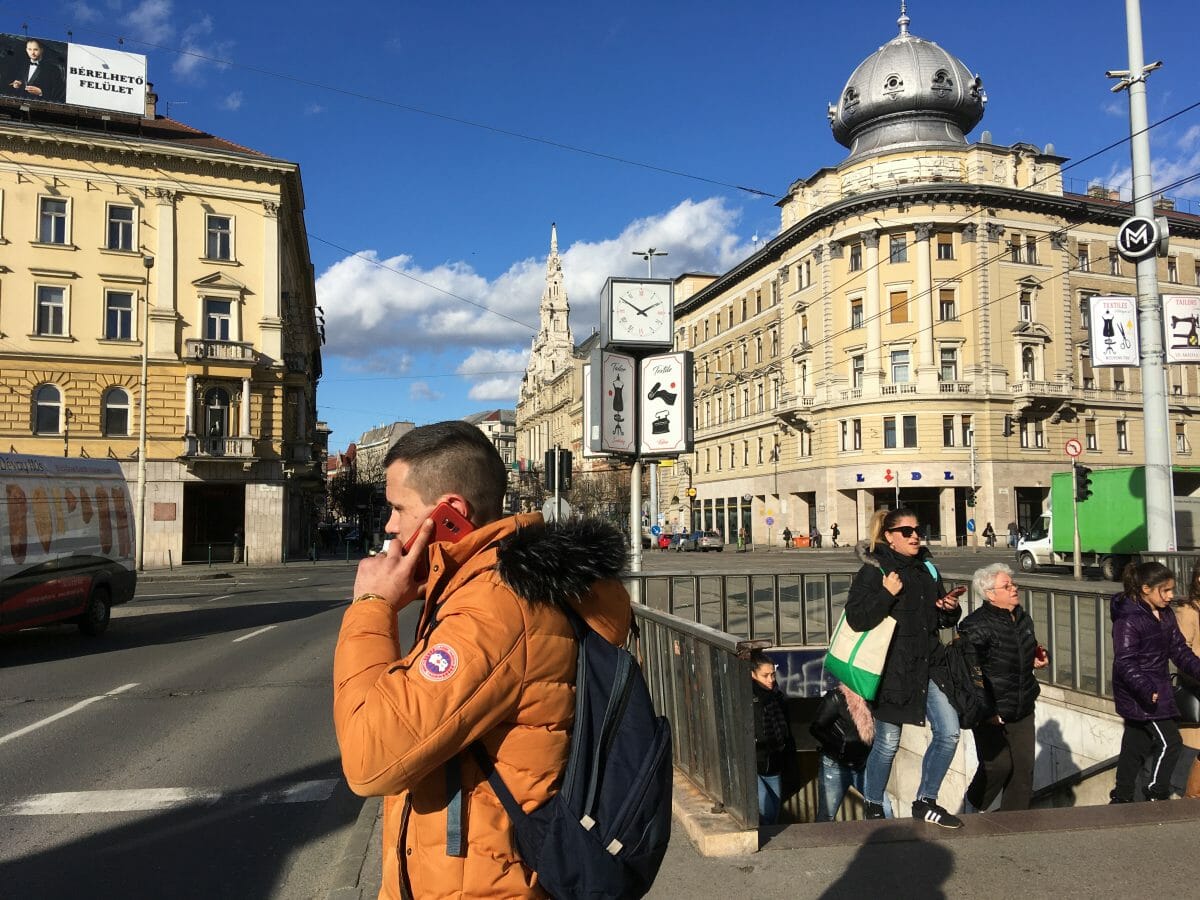 This is not the perp–but notice that everyone is using cell phones.  This would become more obvious as I proceeded east–it’s a status thing.  In rural Bulgaria–80% of those in the train station actually held one in their hand at any one time.  I could find no one who was not glued to these pervasive devices.  I will also note here that I took this photo with my cell phone……OK, they’re a big handy at times. 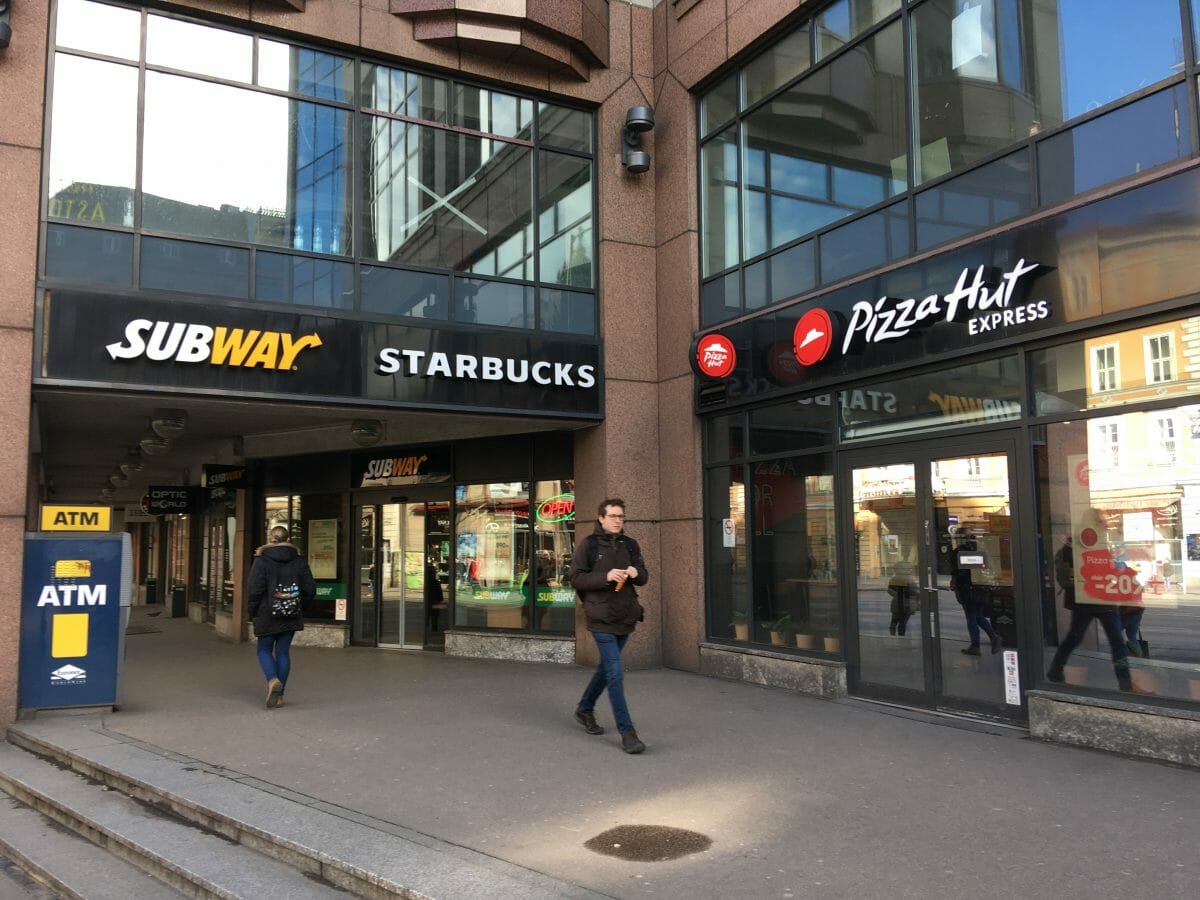 The second thing I noticed was American fast-food is ubiquitous.  Everywhere in Europe and perhaps the world. 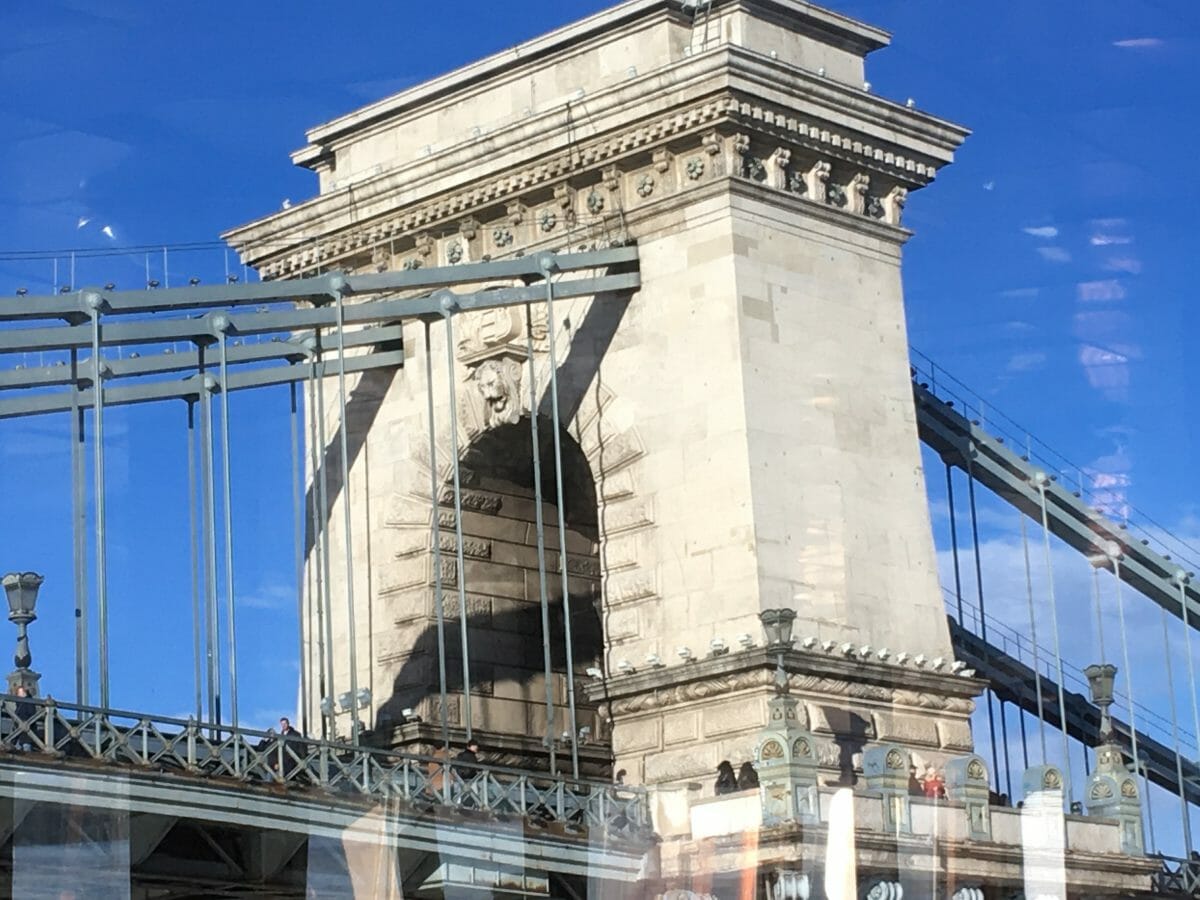 OK–let’s talk. bridges.  With all this extra money, I checked my bags (the reason I. wanted only $5USD in the first place) and walked about 2 kilometers over to the Danube River where all the action is.  There are river tours–shameless excursions for tourists and with about 5 hours to kill (my evening train left at 7pm).   I opted for an hour to rest my legs and learn a bit about Budapest’s bridges and old buildings–it was a $11E–and worth every Euro-farthing.  There are about a dozen bridges spanning the Danube linking Buda and Pest–and all of them were built or rebuilt since WWII.  This is the Czechenyi Bridge, a chain-linked suspension bridge built in 1849 and was the first to span the Danube. 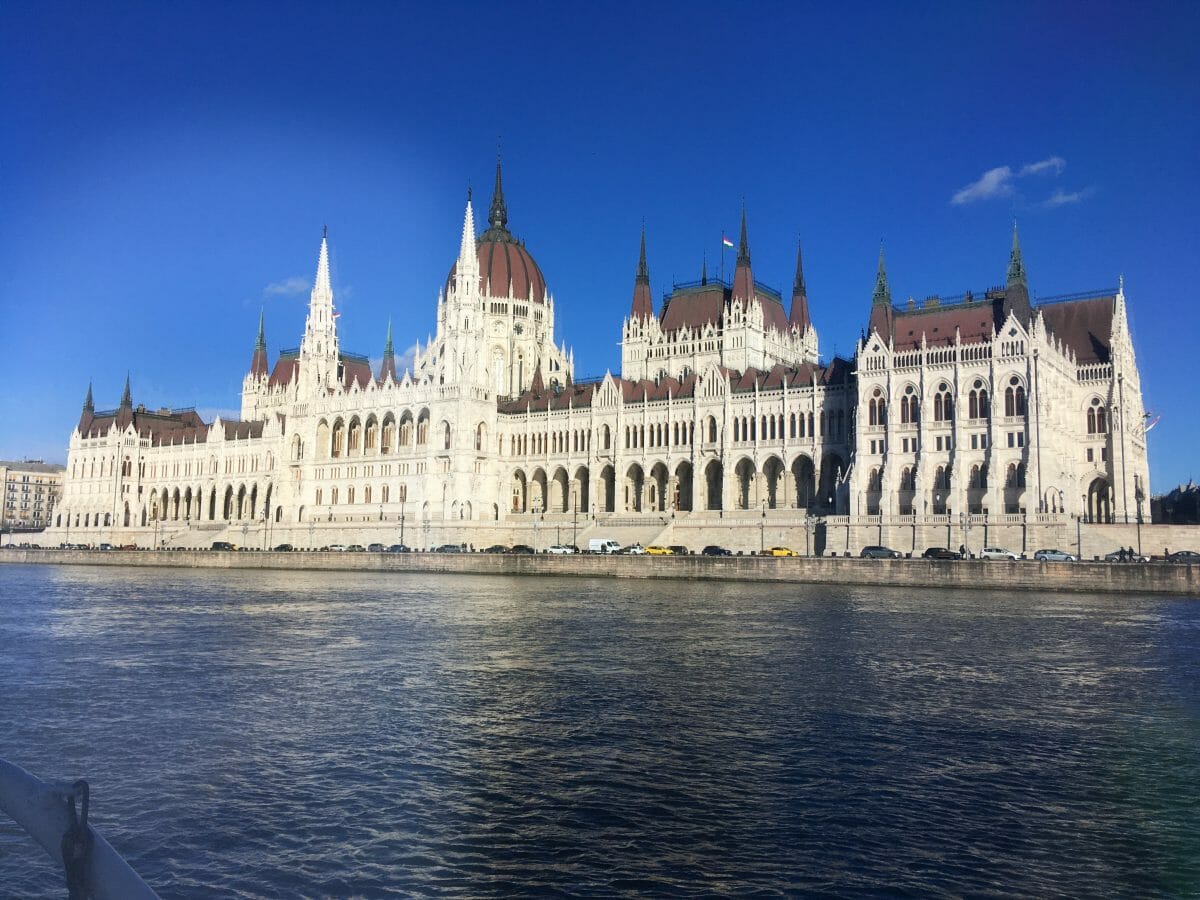 Budapest’s parliamentary building.  It looks gothic, but was built at the beginning of the 20th century. 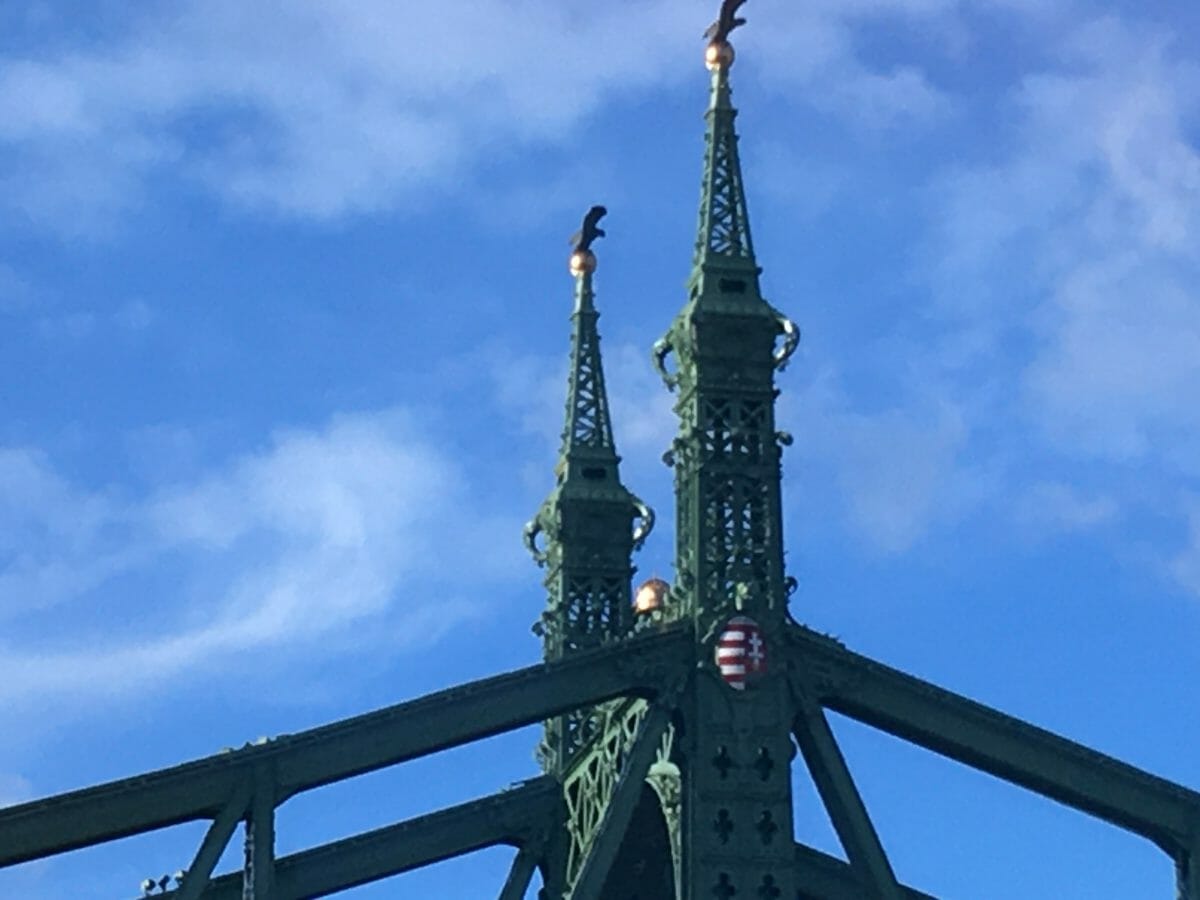 The Liberty (or Szadadsag) Bridge is one of the most ornamental bridges and like all the others was destroyed by Nazi sappers when they vacated Hungary at the end of WWII.  After the war, the center span was recrafted from replacement parts matching those that were raised out of the river and a continuing effort to restore to it’s original form continues.  Today, it has been repainted in the original green color, after initially being painted brown after the repairs and earlier subsequent recolorations.  Earlier photos were all black and white (boy, do I know this problem with my posters!) so they guessed and painted it brown.  The last rivet on the Pest abutment is pure silver and was driven in place by Emperor Franz Joseph–of course, it’s also painted so try to find it…..(Hmmm….perhaps a magnet?)  The tops of the main masts are not decorated with the Mormon Moroni…..no, they are bronze statues of Turul, a falcon-like bird in Hungarian mythology.  Let’s move on…… 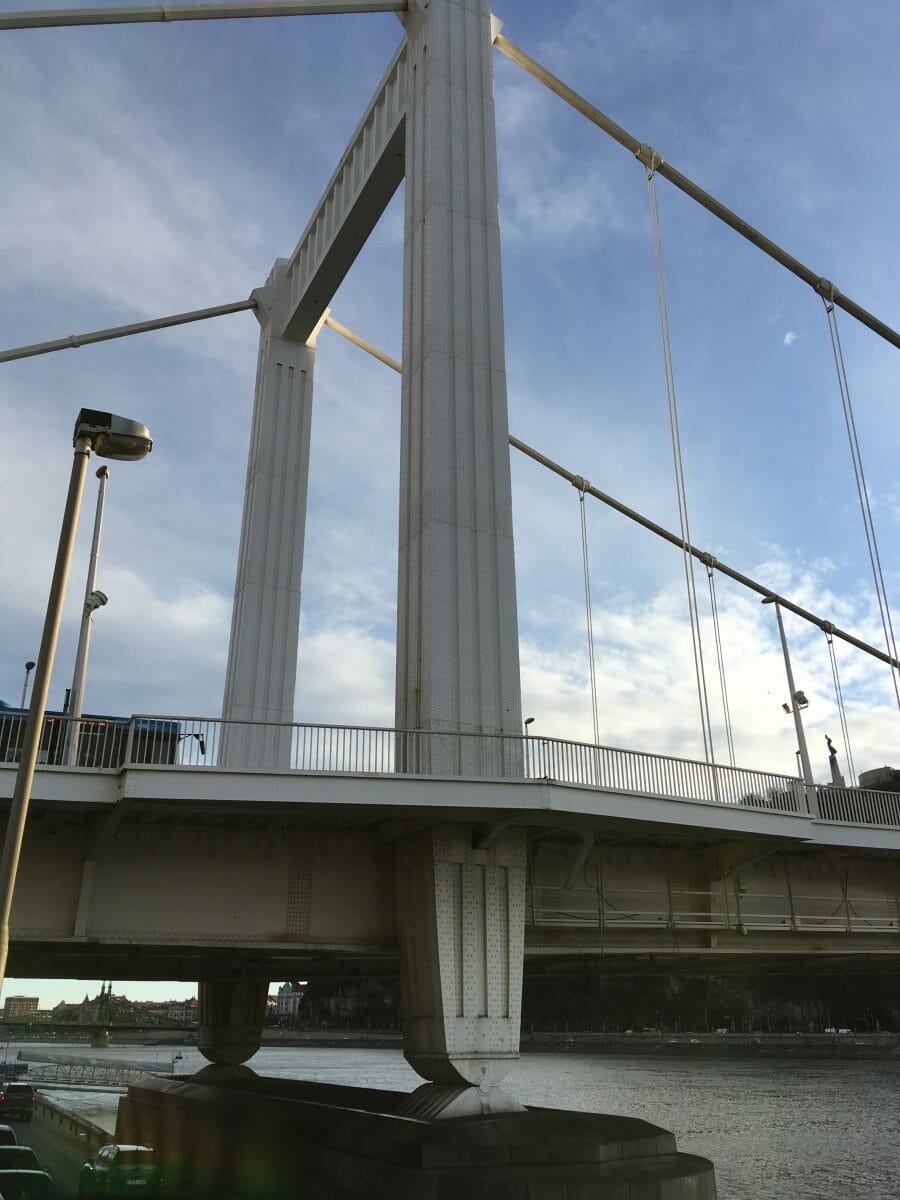 This was my favorite bridge, not for it’s architecture, but it’s engineering.  This whole bridge balances on a very small footprint, albeit steel. 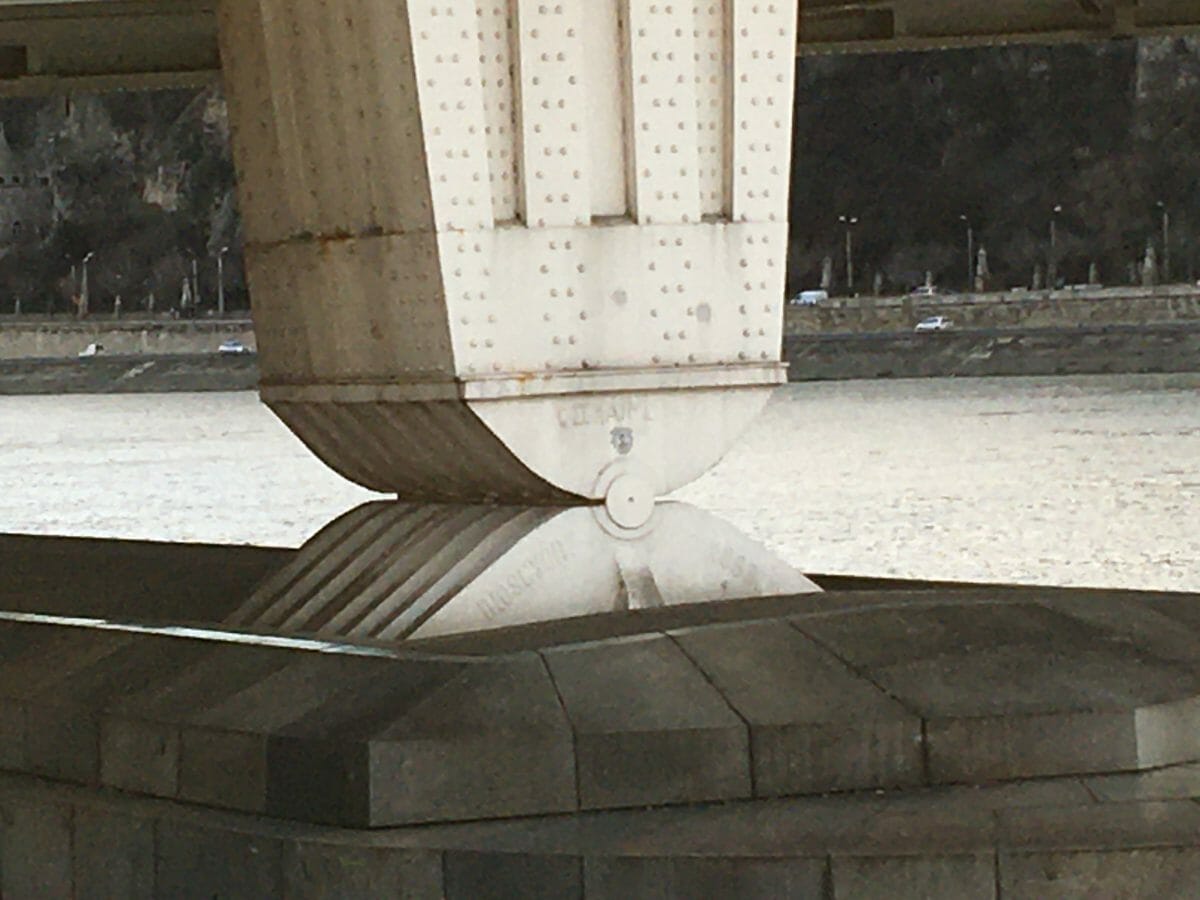 Like all other bridges, this was also destroyed in 1945–everything except the massive bases, so the it was re-engineered upon the original foundation and between 1961-1964 a modern designed bridge was fabricated.  I hope they don’t have earthquakes in Budapest.  It also seems like you could slide this bridge sideways or even tip it over? 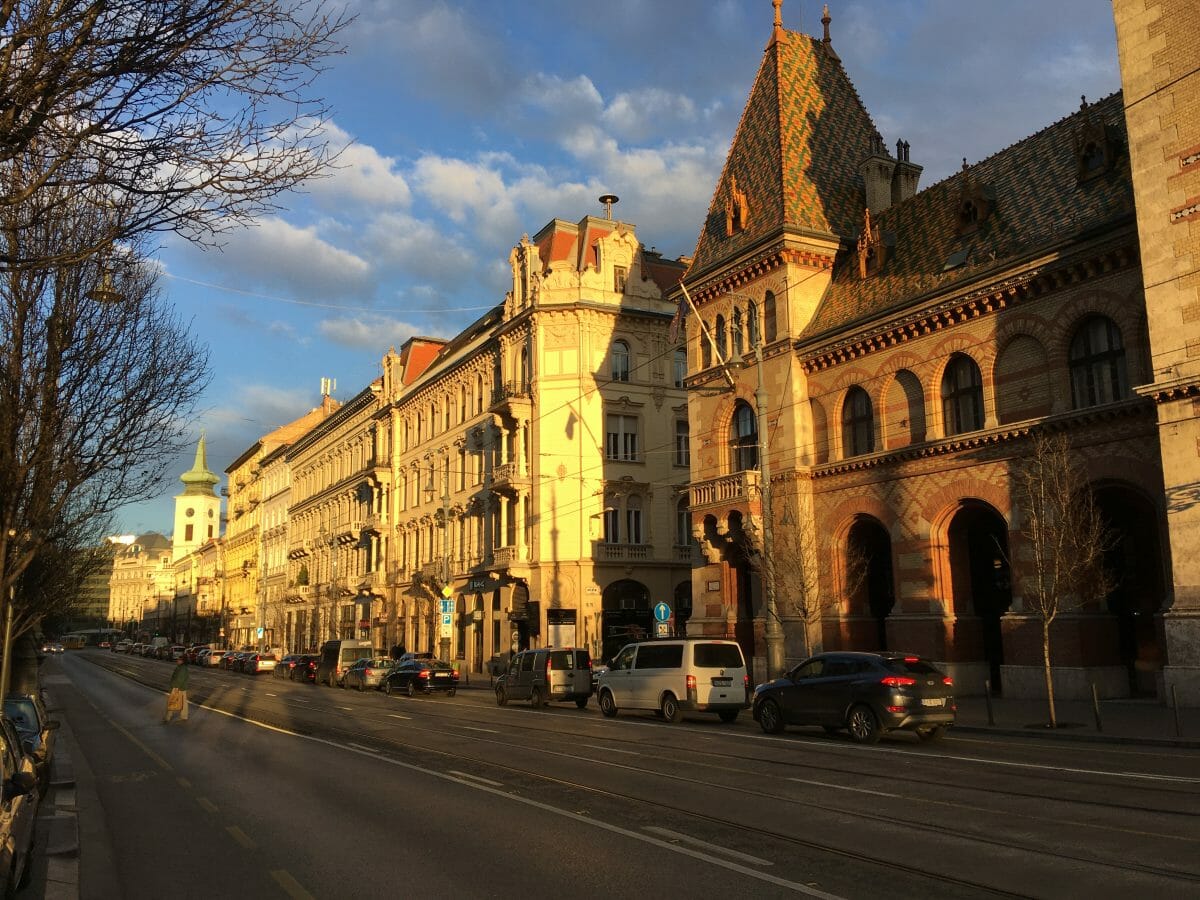 I have a nice 4 mile walk all in all through the old part of town.  I discovered a huge hangar-like building which had a farmers market within–sort of like Seattle’s Pike Place Market. 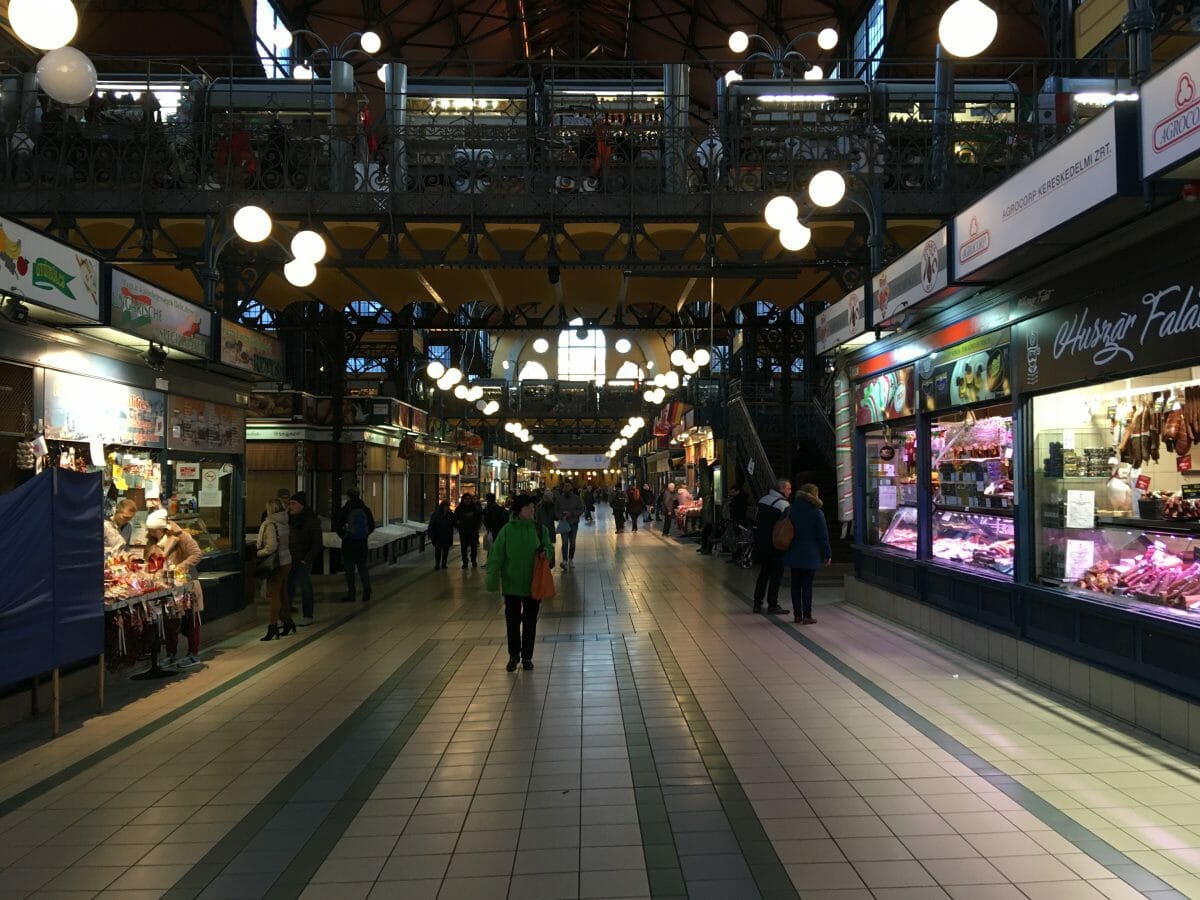 One of the vendors there is a young woman who speaks perfect British English so she selects a nice sandwich and some breakfast pastries for my upcoming 19 hour all-nighter train ride to Dimitrovgrad. There is no food or dining car on the train.  Oh, I can’t wait!