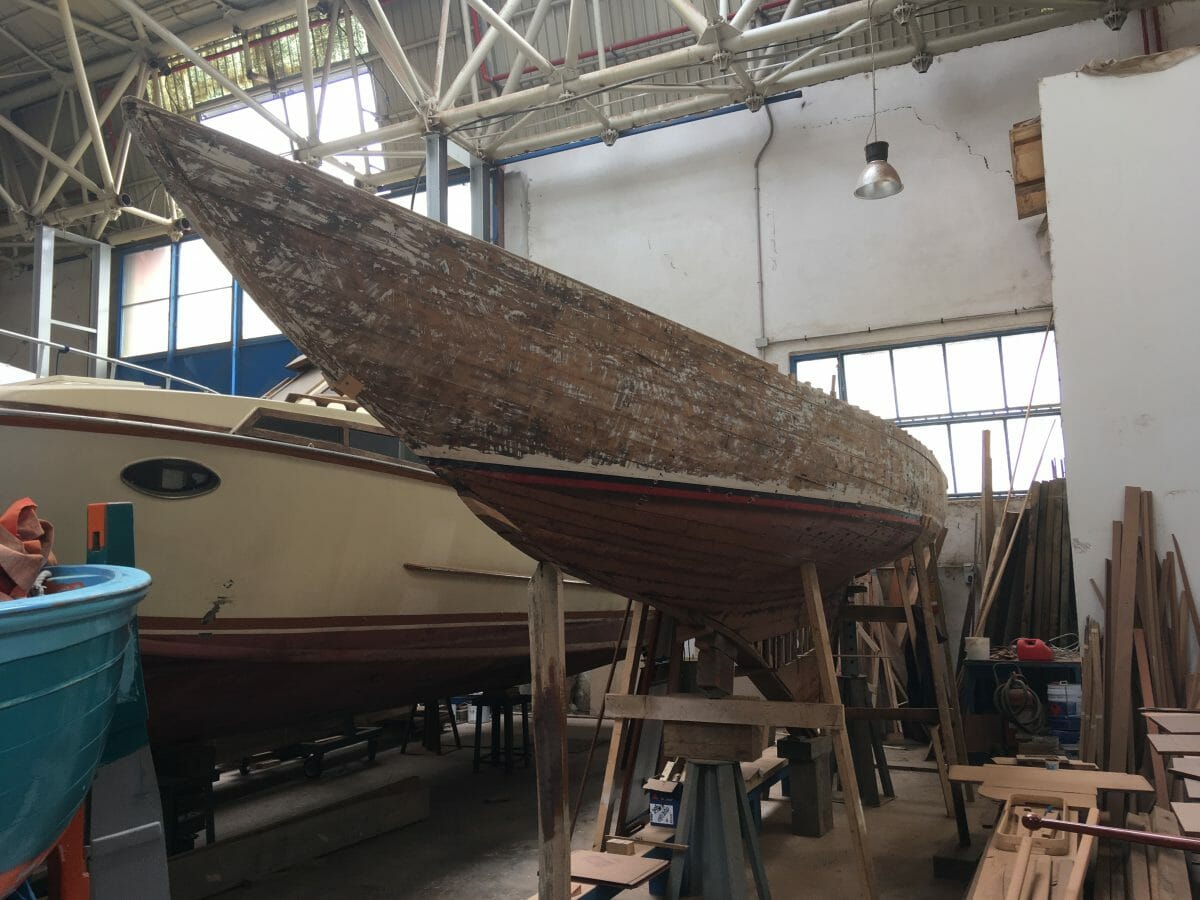 Before heading out to Capri, let’s talk about boats.  While my host, Bruno, does his maritime stuff here in Naples, I get a tour of the boatyard.  I won’t even begin to describe these beauties–Stradivarius of the Seas so to speak. but I’ve already used that metaphor.   This boat-house is so full of projects, it makes my mouth water and my wallet ache.  I’ll just focus on one–JFK’s private motor boat, Marlin.  How it ended up on Naples is somewhat of a mystery. 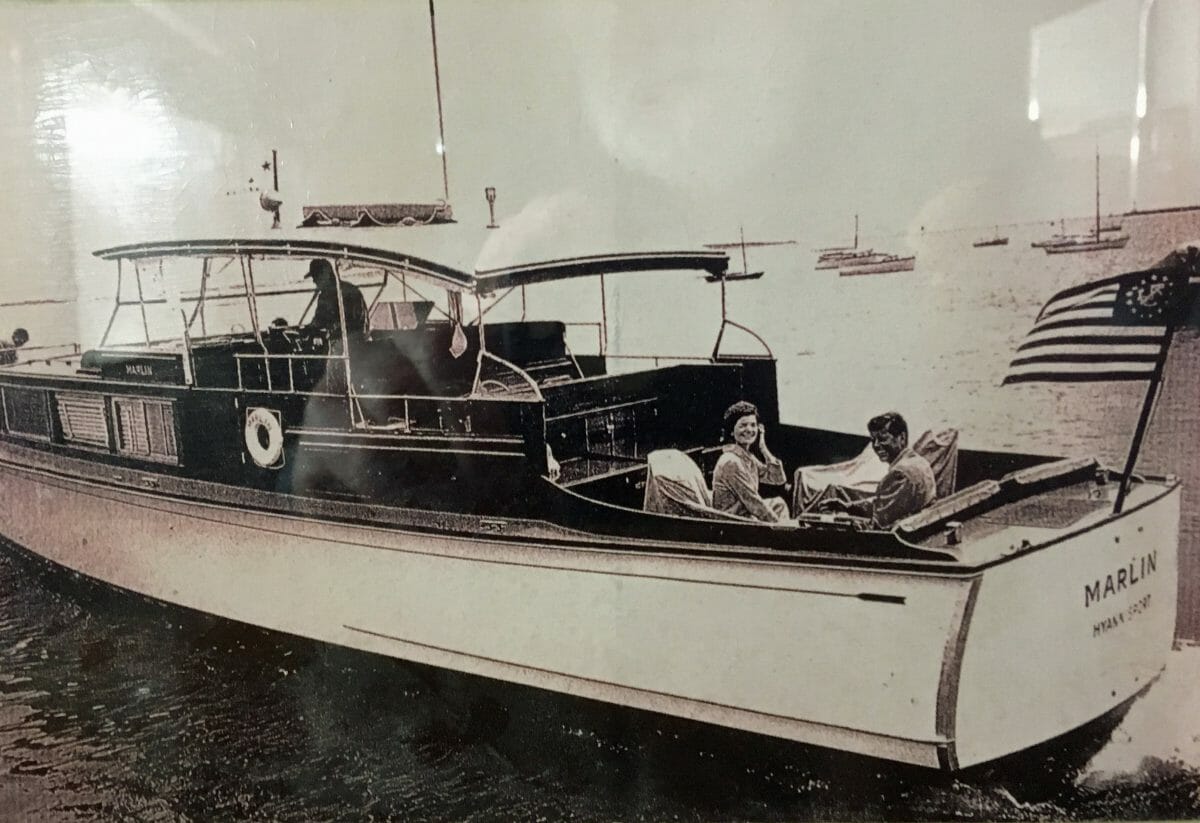 It’s quite a distinctive vessel, especially the pilothouse.  Built in 1930 for Henry Ford, it ended up in the possession of Joe Kennedy, JFK’s father who presumably passed it on to his son. 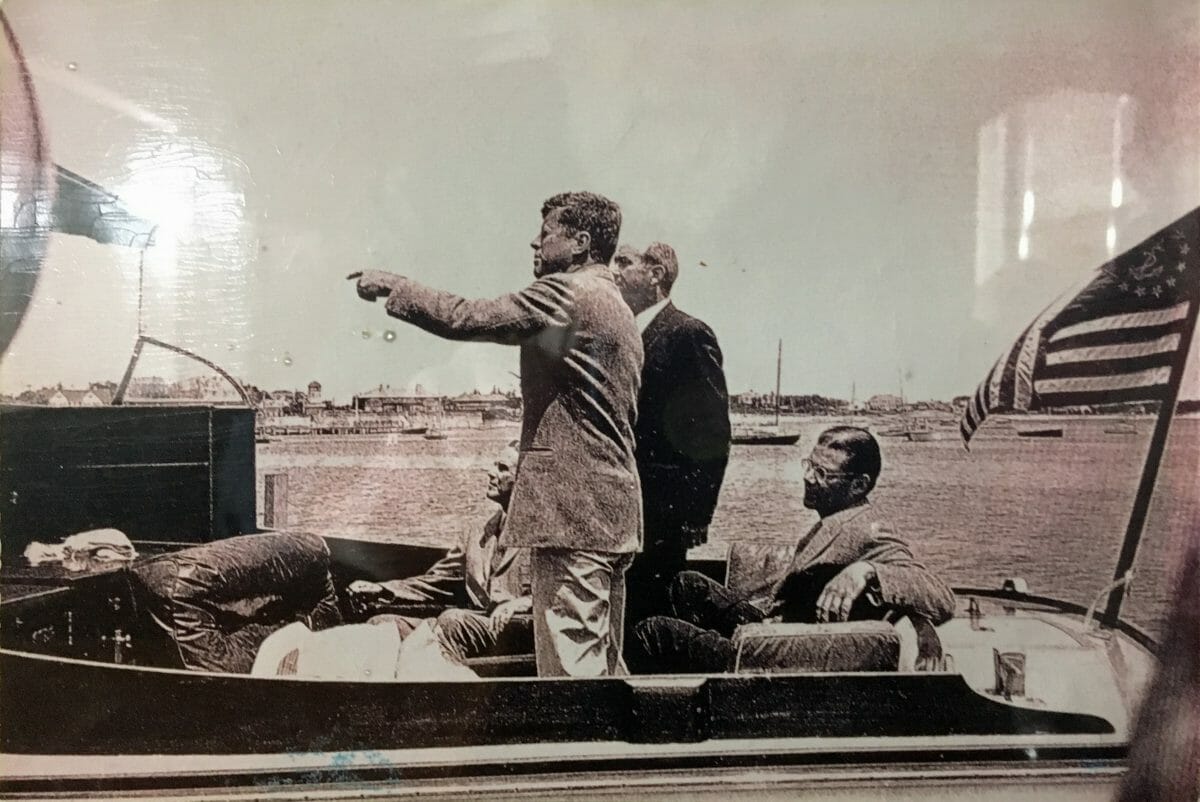 During the Cuban Missile Crisis, Kennedy met with his cabinet.  I can recognize two for sure, but who is the person standing just to the right of JFK in this photo–Dean Rusk?  And who is the seated person?  These photos are still hanging in the boat here in Naples. 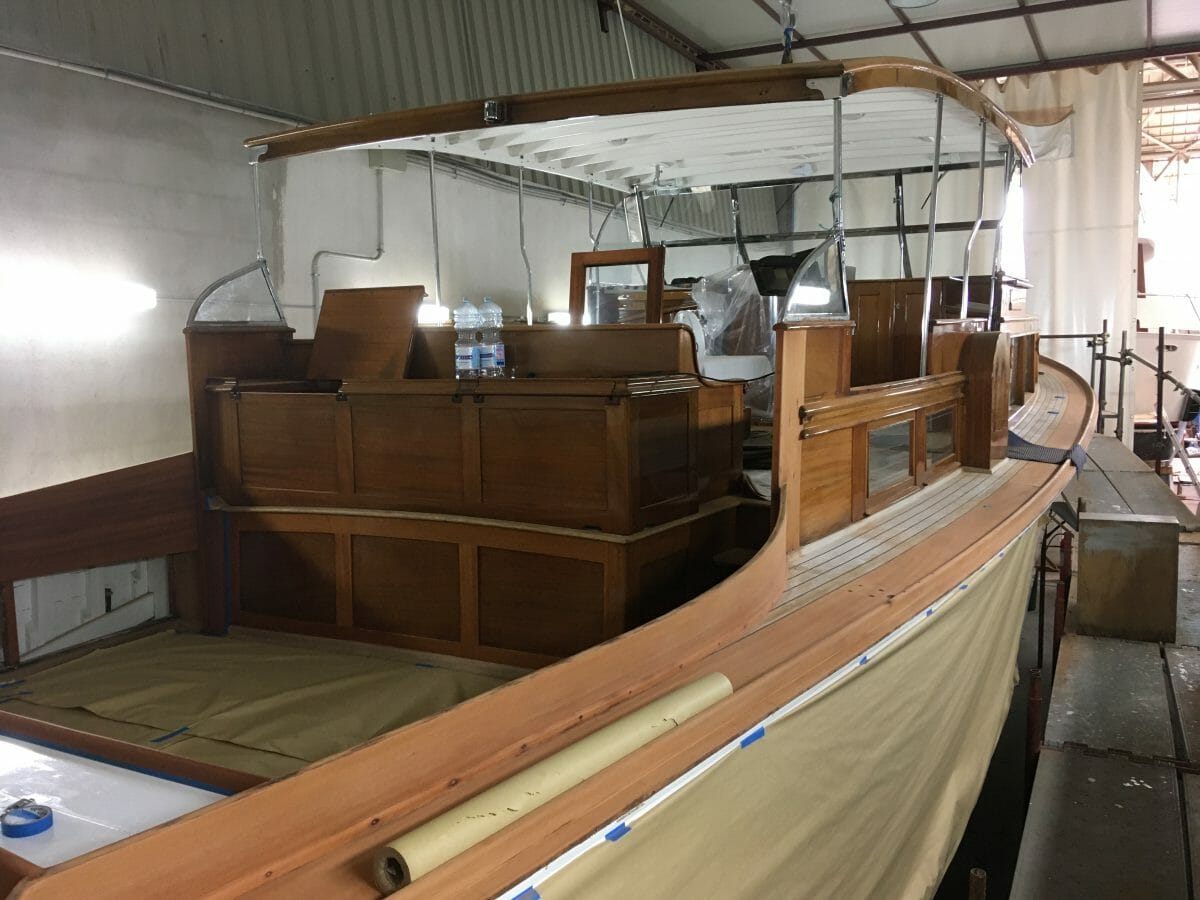 The new owner has pledged to restore it perfectly and is even manufacturing fasteners (screws, etc.) to match if they are not currently on the market.  The woodwork is impeccable. 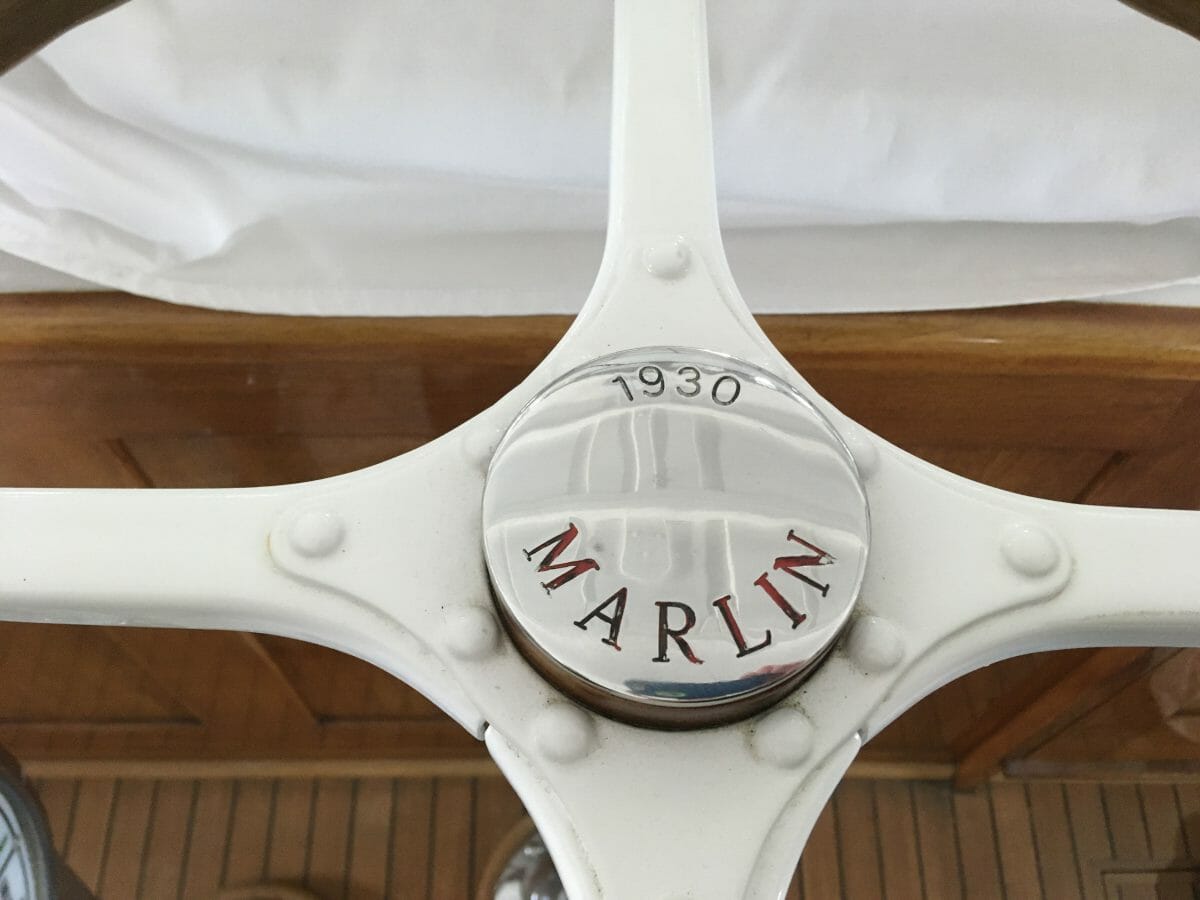 Sweet!  It even boasts a telegraph–the round “Full Speed Ahead” device to communicate with the engine room–except there is really no engine room.   All right, let’s move on to Pompey. 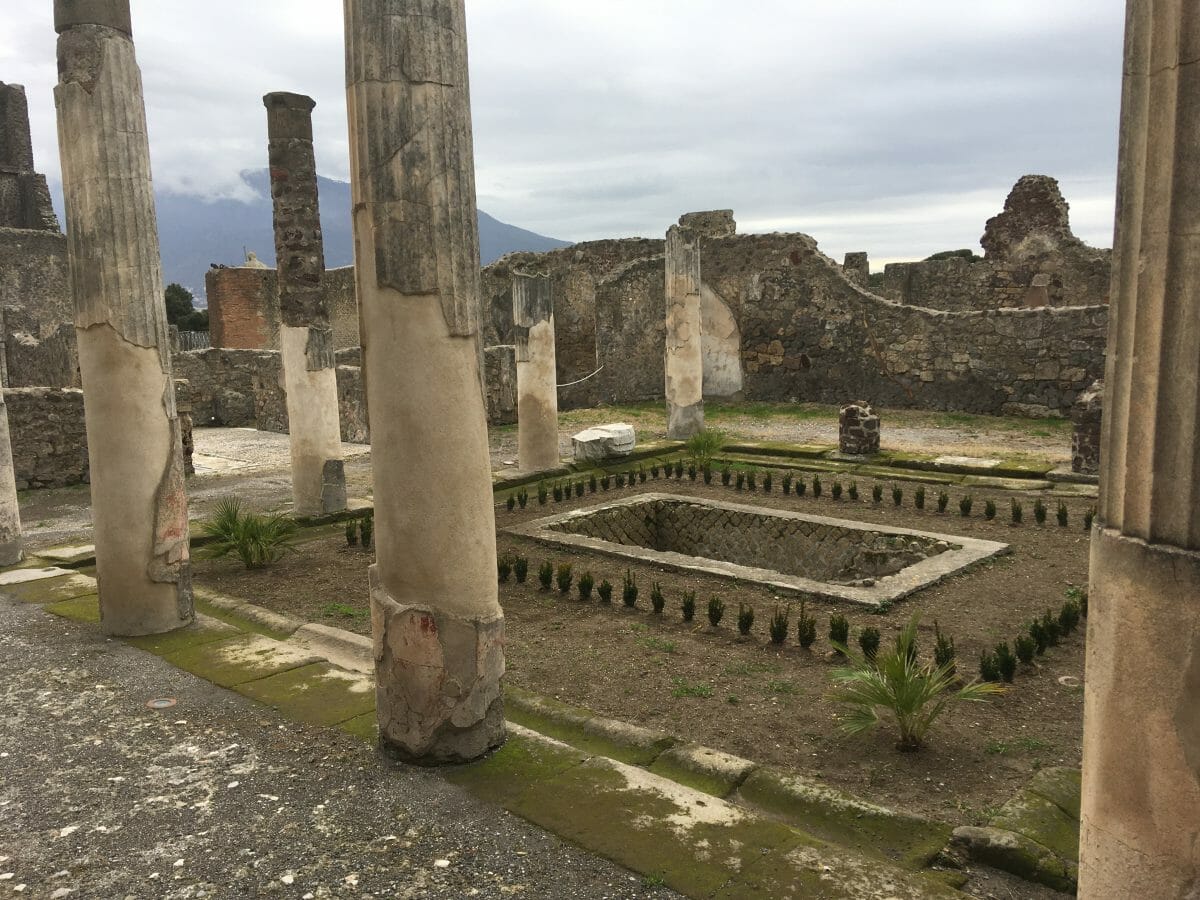 Pompey is a huge city and was in 79AD when it was obliterated by the eruption of Mt. Vesuvius.  Today it extends underneath the adjacent modern cities, now suburbs of Naples.  It’s about a 30 minute rail ride south of the heart of Naples.  Acres and acres of the exposed ancient city are open to stroll around and ponder what Roman life was all about.  It was a cloudy day but nevertheless a wonderful way to spend the afternoon. 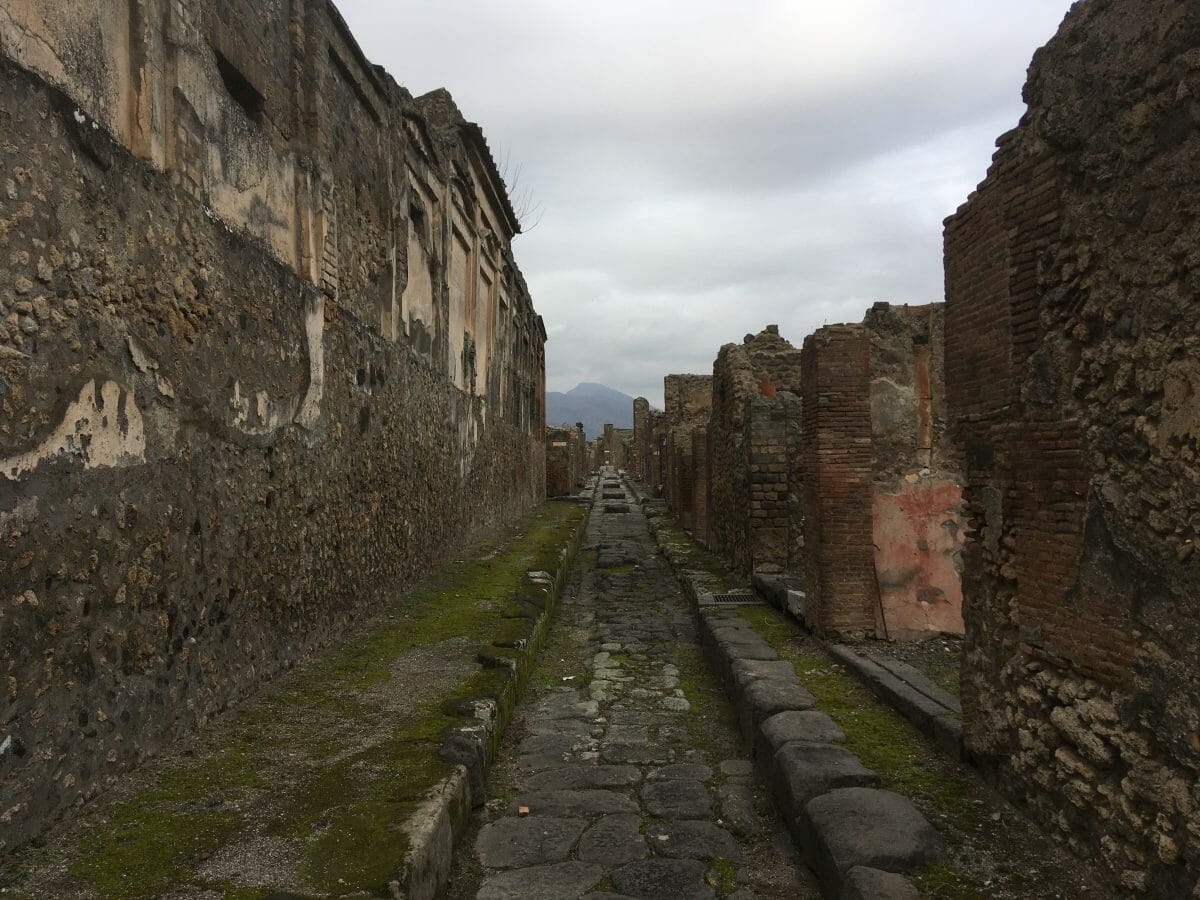 Narrow streets, and miles of them.  These streets were very narrow and designed to fit the chariot of the day.  Read on. 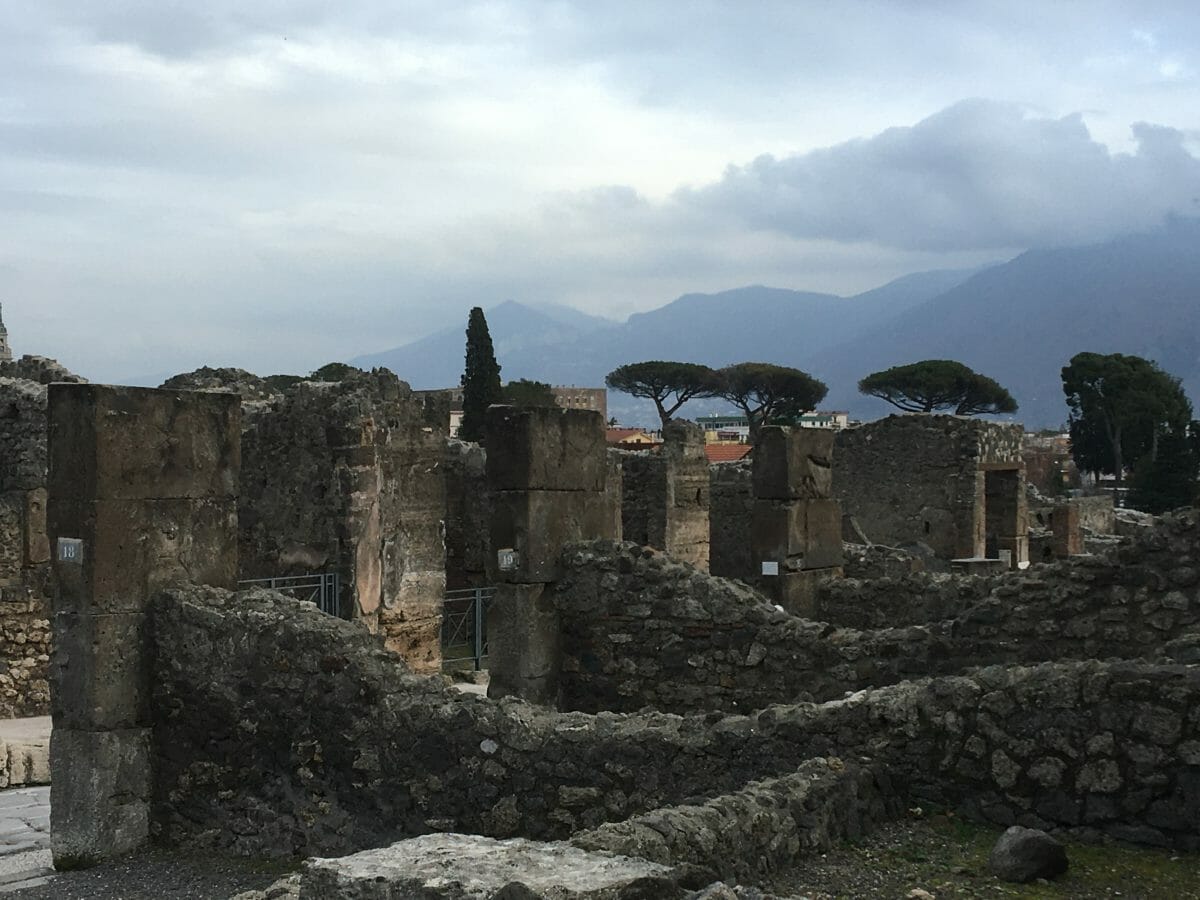 The shoulder of Mt. Vesuvius looms above the town–not a great site selection for Pompey as it turned out. 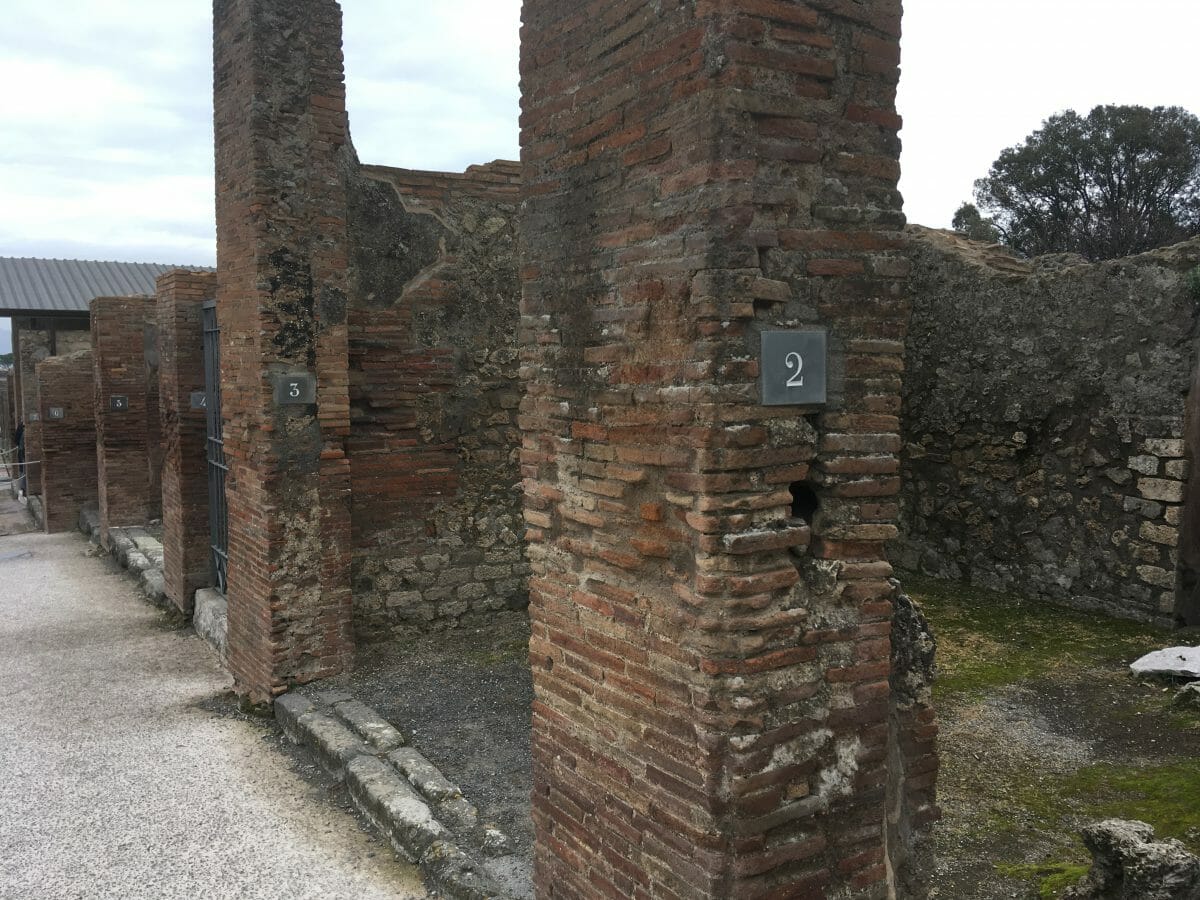 Remember Roman Numbers in school?  Well, don’t you believe it!   They used numbers just like we did.  The only place I could find them is on clock faces.  And the map they gave me to navigate was practically worthless–there were so many divisions and no streets matched up.  So I simply wandered around quite lost but enjoying it all. 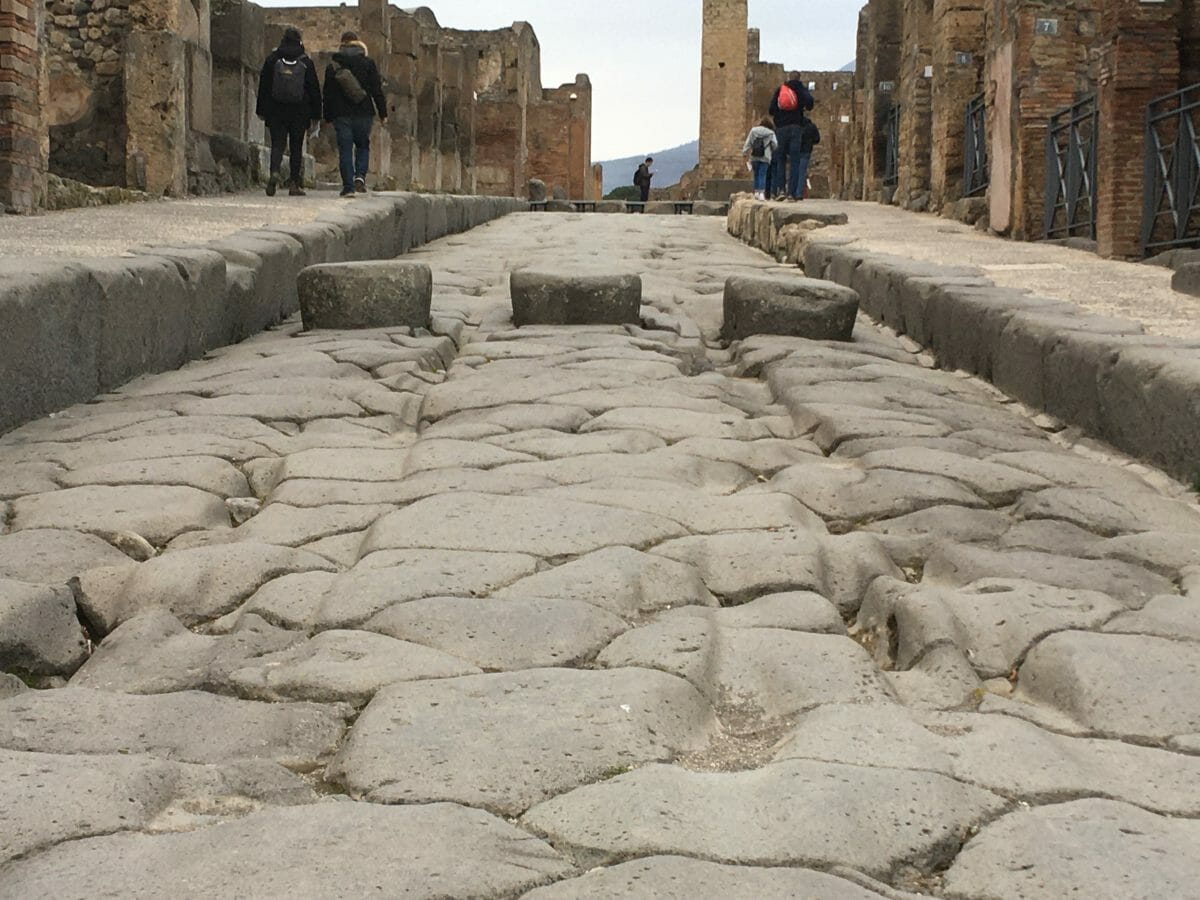 OK–here’s more of the street scene and the mysterious blocks.  Maybe they didn’t want steamrollers?  I can’t imagine the bumpy ride. Contrary to some websites, these grooves were not carved in to route the traffic, they were worn in over the centuries. 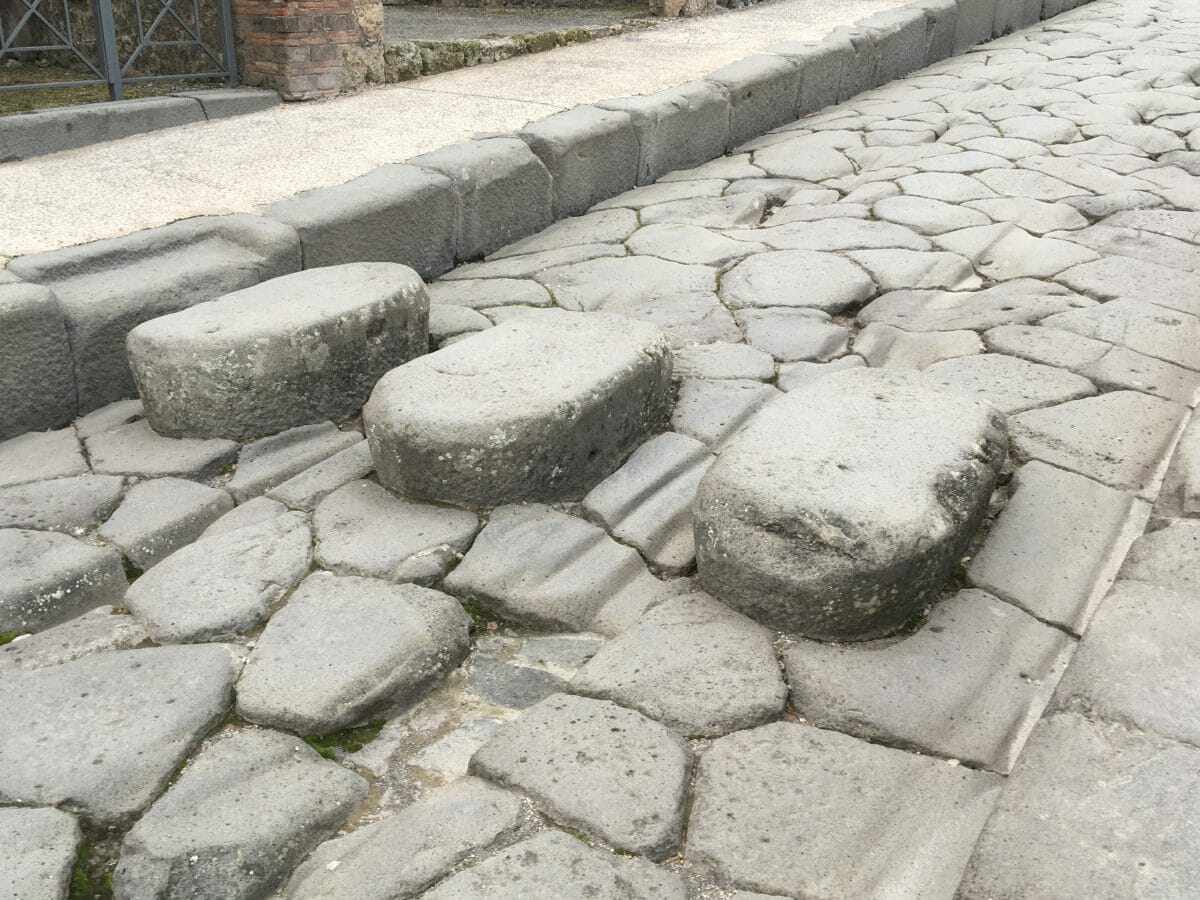 Puzzling.  Here’s Mark Twain’s interpretation:
“Have I not seen with my own eyes how for two hundred years at least the pavements were not repaired! – how ruts five and even ten inches deep were worn into the thick flagstones by the chariot-wheels of generations of swindled tax-payers? … I wish I knew the name of the last one that held office in Pompeii so that I could give him a blast. I speak with feeling on this subject, because I caught my foot in one of those ruts, and the sadness that came over me when I saw the first poor skeleton, with ashes and lava sticking to it, was tempered by the reflection that may be that party was the Street Commissioner.”  I think Twain might be on to something; I wonder what he thought about Roman numerals? 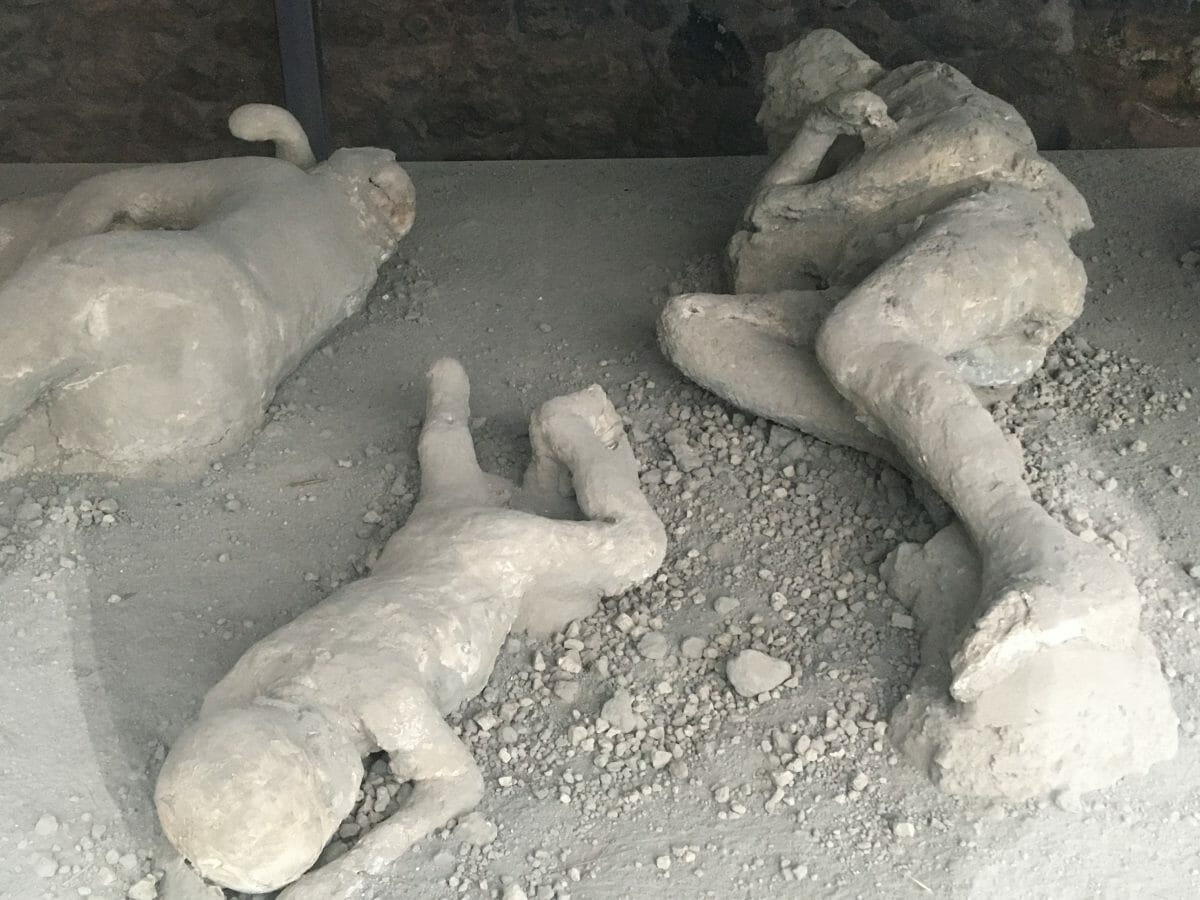 This is a sight that no one will forget.  In the 1970s, excavators noticed cavities in the welded tuff or pyroclastic flows of Vesuvius as they cleared out structures.  On a hunch, they poured plaster-of-Paris filling the holes to discover that these were the hollow cavities where people succumbed to the event.  These scenes are in the very far corner down by the garden.  Sad. 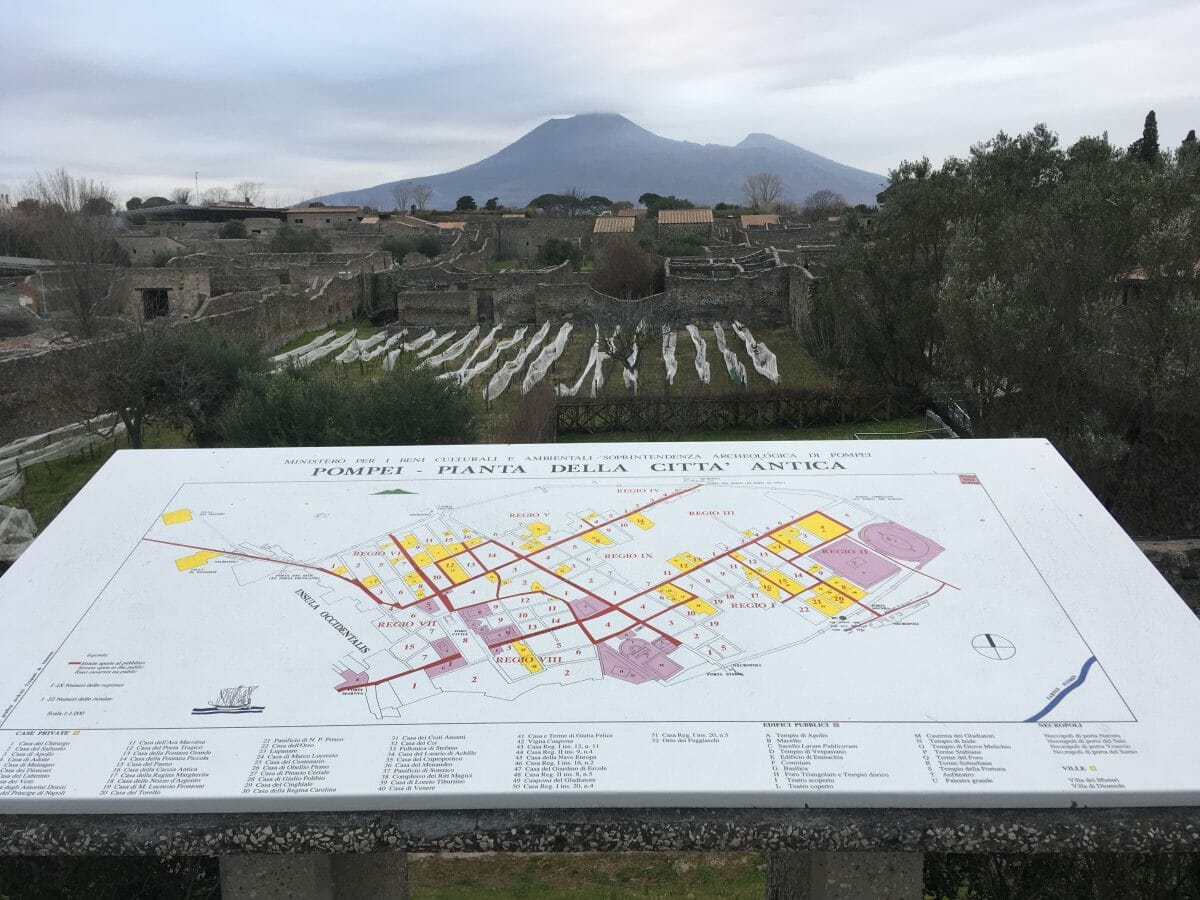 I’ll leave you with this perspective:  the mountain, the town, the map.Mt. Vesuvius last erupted for the early half of the 20th century.  I grew up in the Pacific NW and witnessed Mt. St. Helens blow.  Early NW explorers noted simultaneous eruptions in the 1800s of Mt. Adams and Mt. St. Helens.  It ain’t over yet. 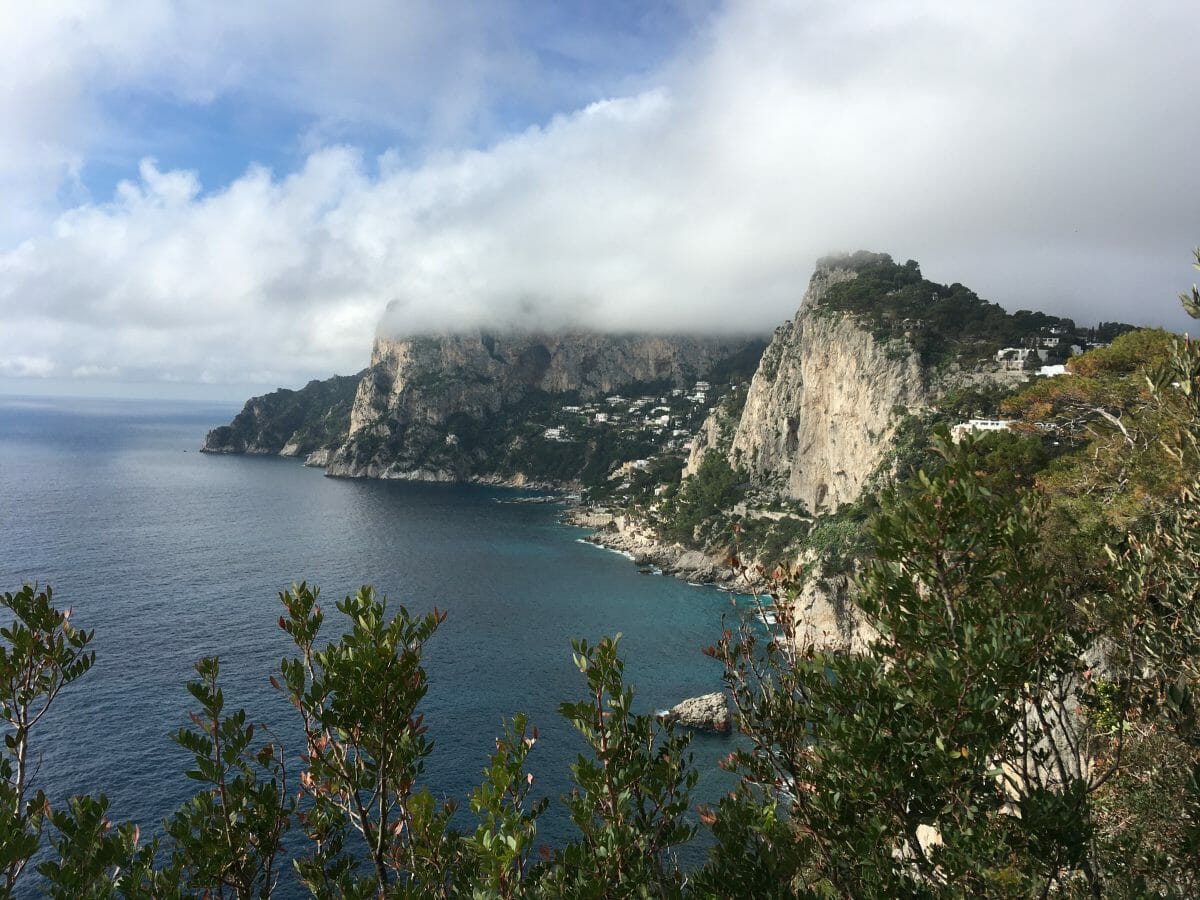 OK, let’s head out to Capri.  Here’s how to do this:  Fly to Rome, take the high speed (hourly) train down to Naples–it’s just over an hour–you will need a reservation for this train or you can take the slower one which takes about 3+ hours.  Catch a cab at the train station for the “Capri ferries” which costs $13 Euros.  The cab drivers will try to skin you–they got me for $20–cash.  Ask ahead how much and if they take cards, then try to walk away……   Italian cab drivers are largely crooks, I’m finding out. 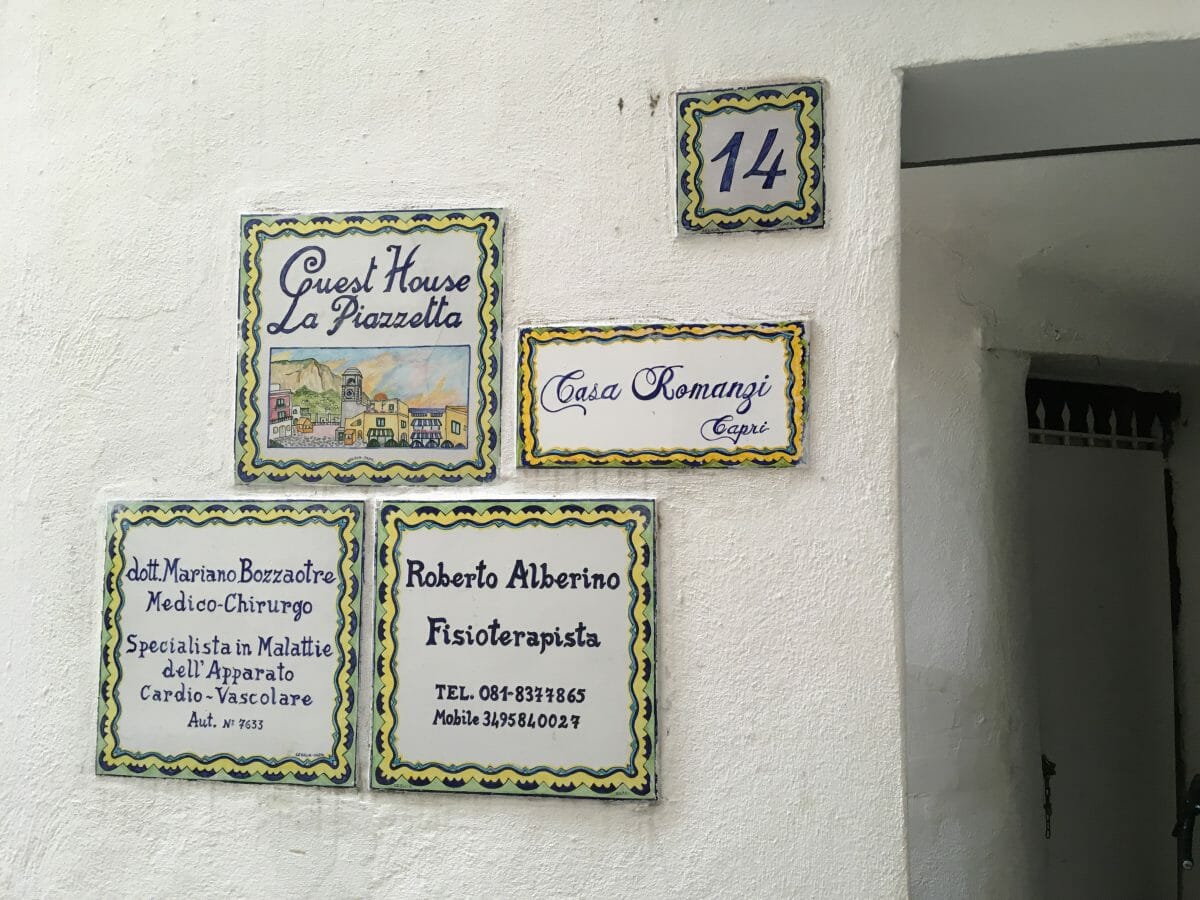 This is my address.  I initially wanted to stay two nights but ended up staying six.  It’s called the “Central Apartment at Bottehge” and is 100 yards or less off the main square.  It has several beds, a kitchenette and these two butchers directly below: 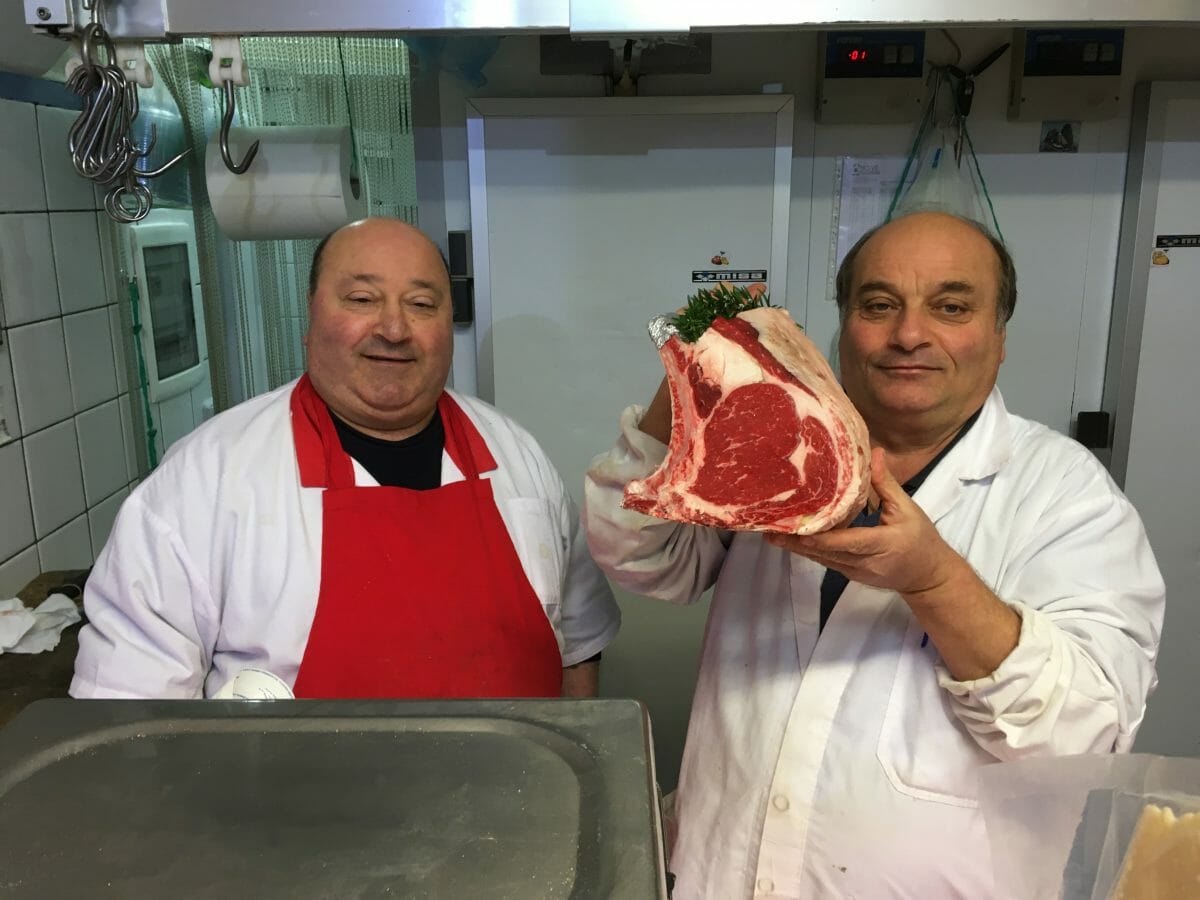 These guys were the Italian version of Tom and Ray Magliozzi (Click & Clack, the Tappet Brothers); maybe they’re related? 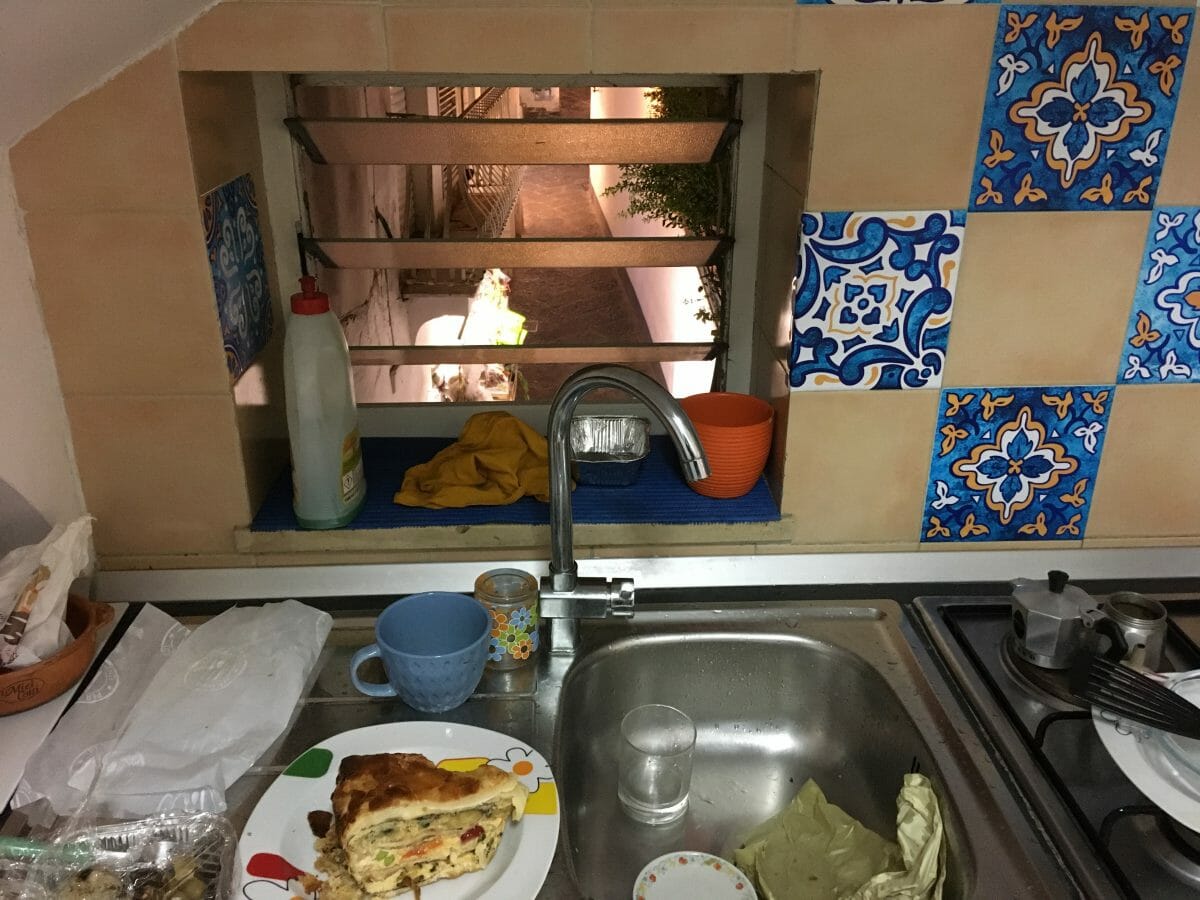 When I opened my little window above the kitchen sink, I could look right down directly on the street which ran underfoot.  You could hear every conversation and of course, they could too.  My dinners consisted each night (except this one) of eggplant parmigiana from the Capri Supermercado–it’s just uphill from the bus station–about 100 yards from my apartment.  The wife cooks this treat and for 5 our of the 6 nights I eat the same thing–I’m a vegetarian now! 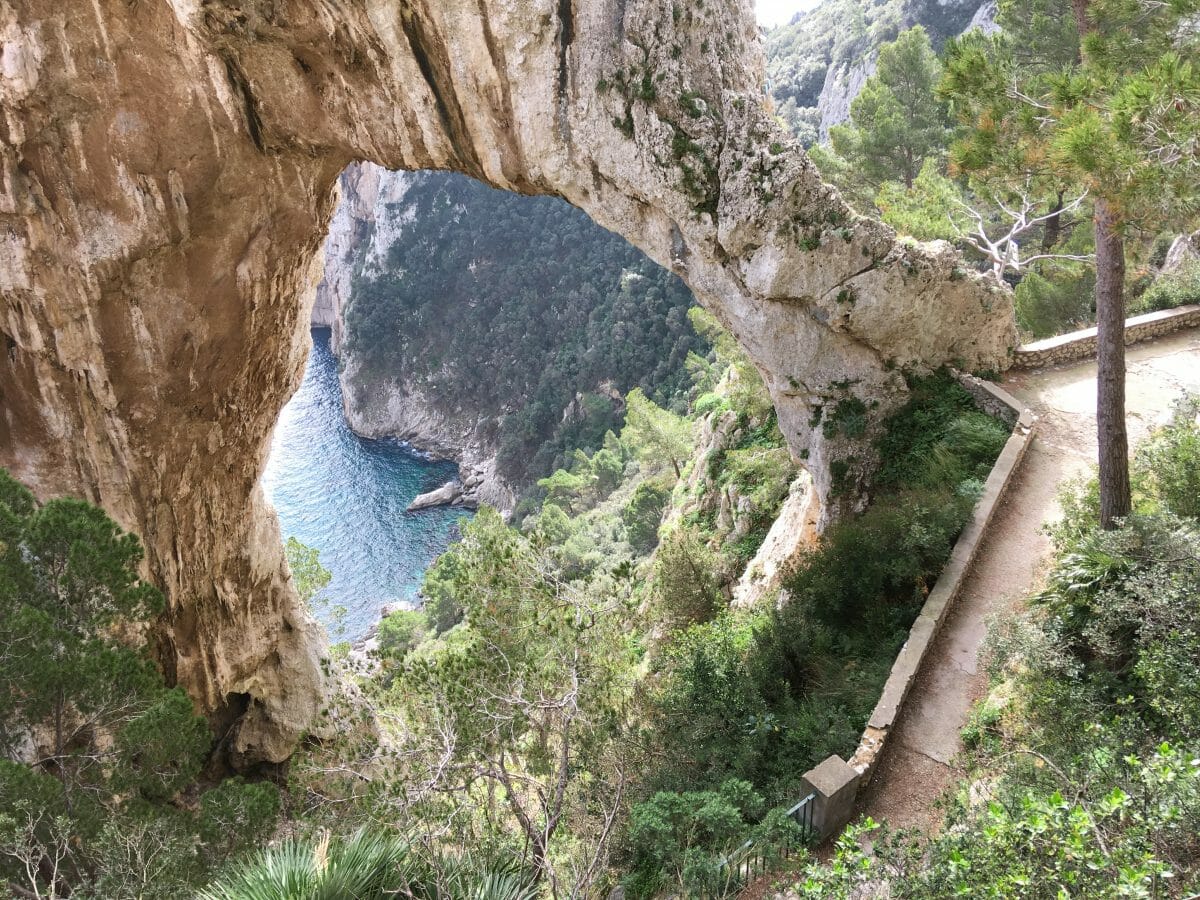 I take four hikes during my stay.  The first is to the Natural Arch.  These are all well marked so I won’t show maps.  It’s about a two hour loop with phenomenal views and even an old Roman ruin.  And lots of rest benches as there are a lot of stairs.  I utilize them all. 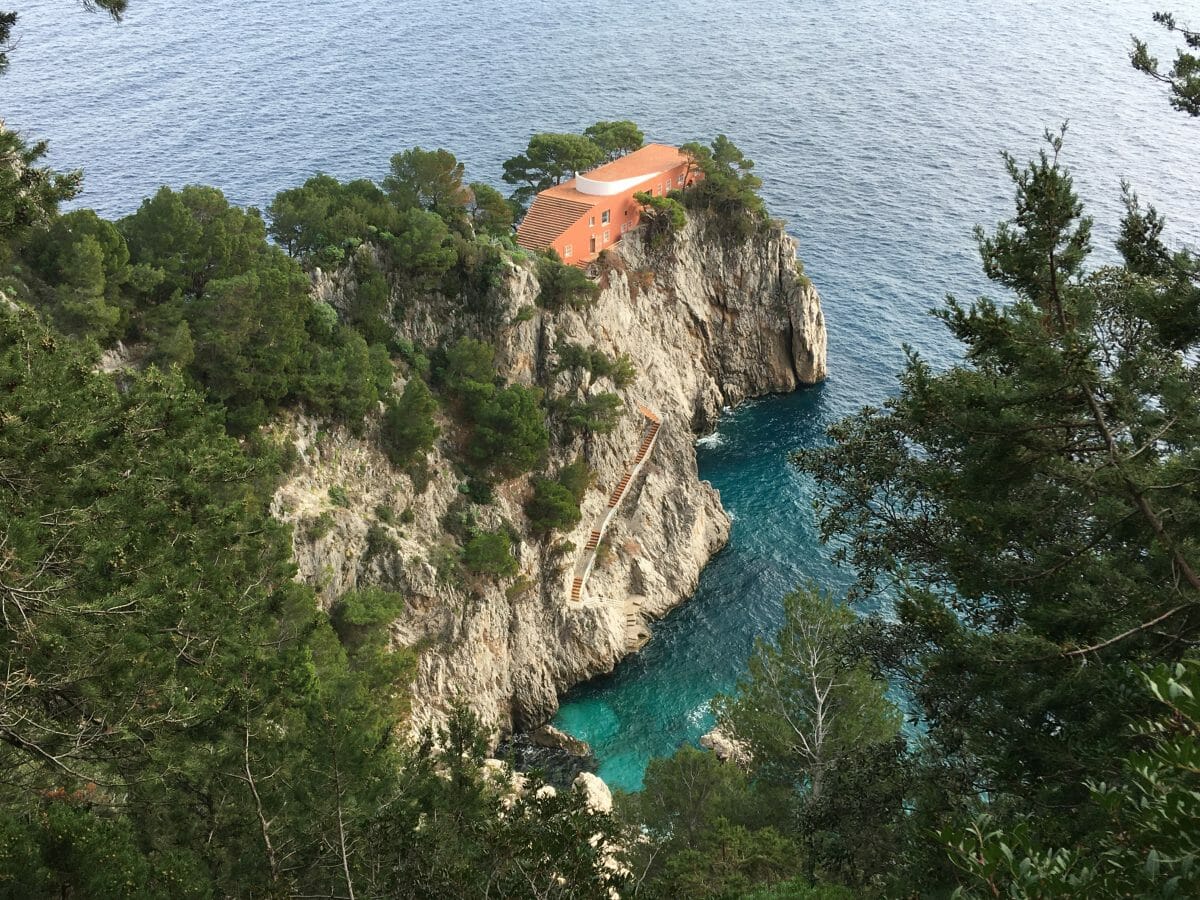 Capri is noted for its wealthy villas–Emperor Caesar Augustus even built a villa here–actually, he took the whole island. 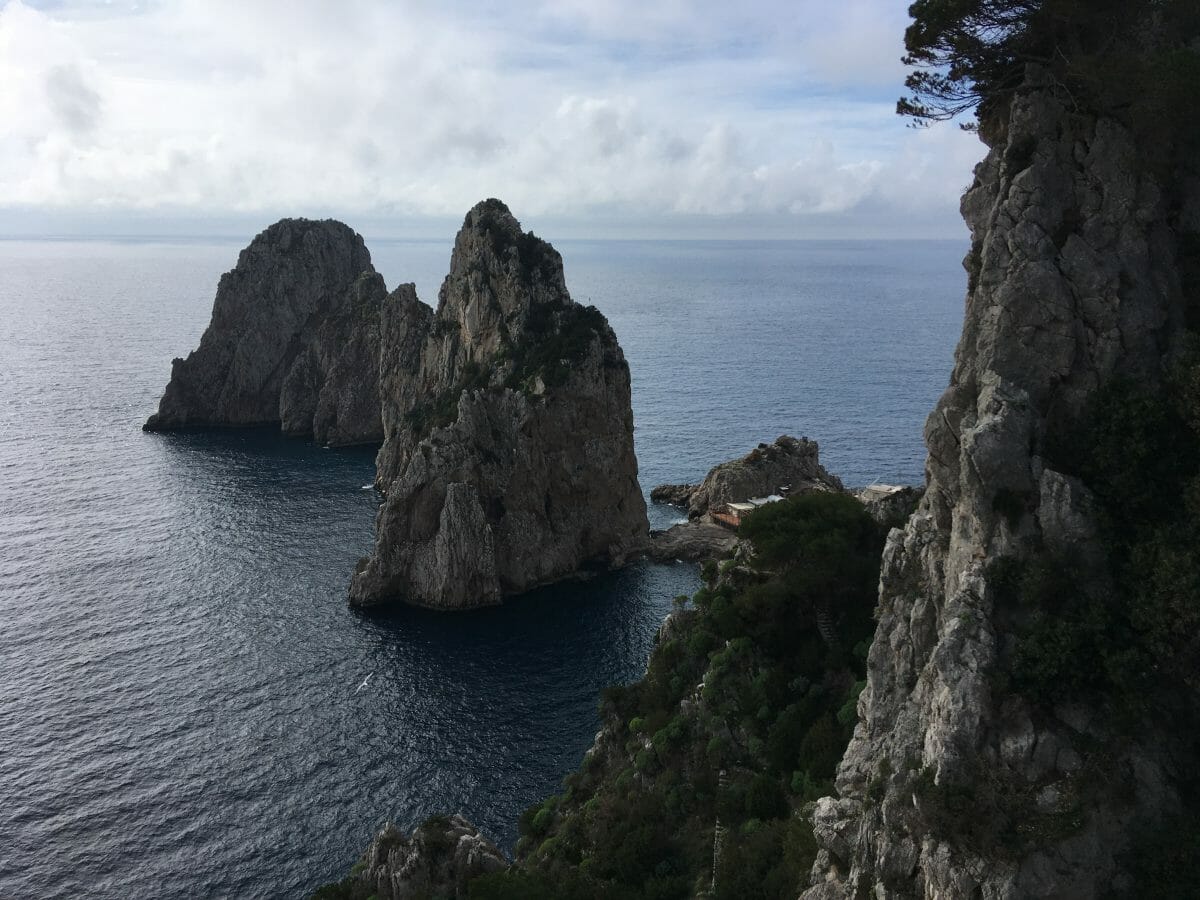 Mostly limestone which means lots of sea-stacks, grottos and caves.  The path (all paved and stepped) winds along this face. 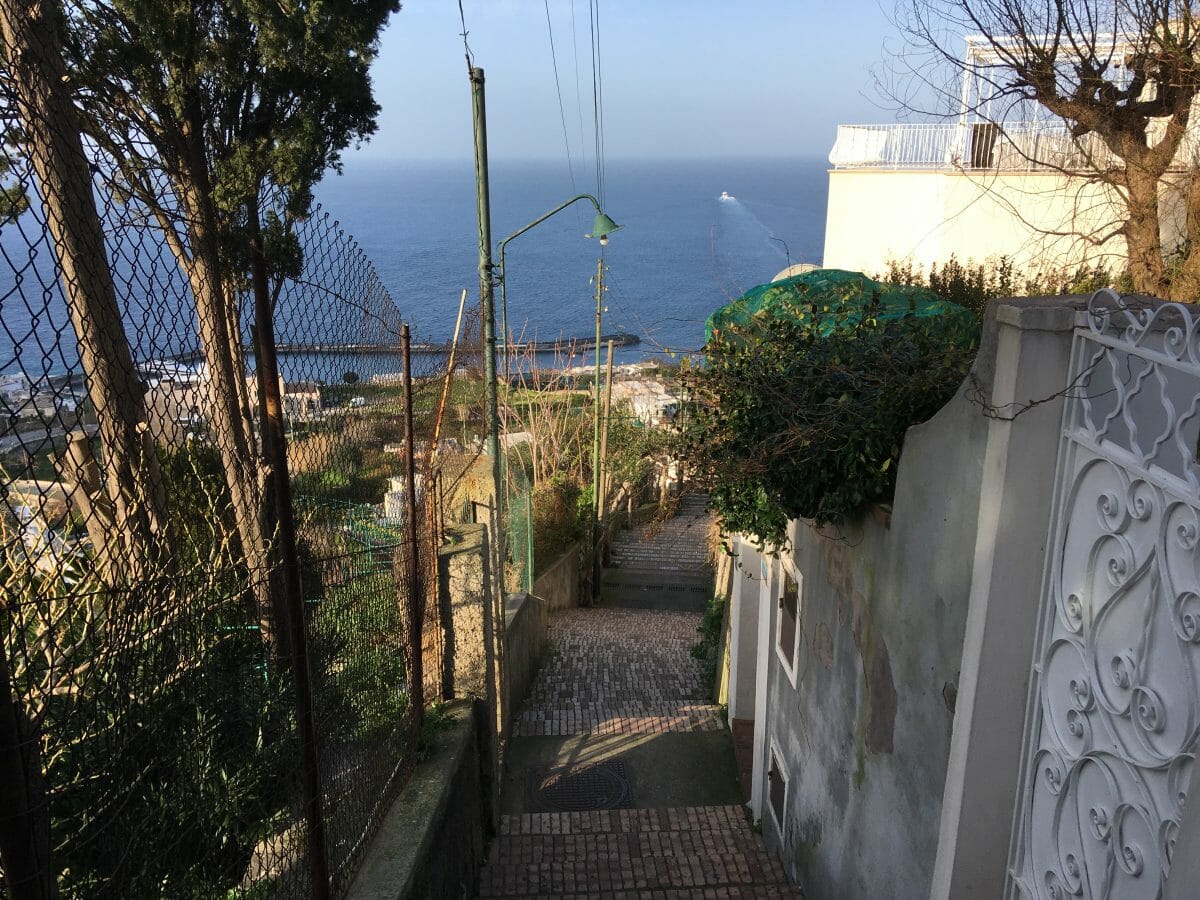 My second hike was up to the extreme west corner where the Villa Jovis is–it was closed for the season but is perhaps one of the most intact Roman villas left.  This is the typical trail. 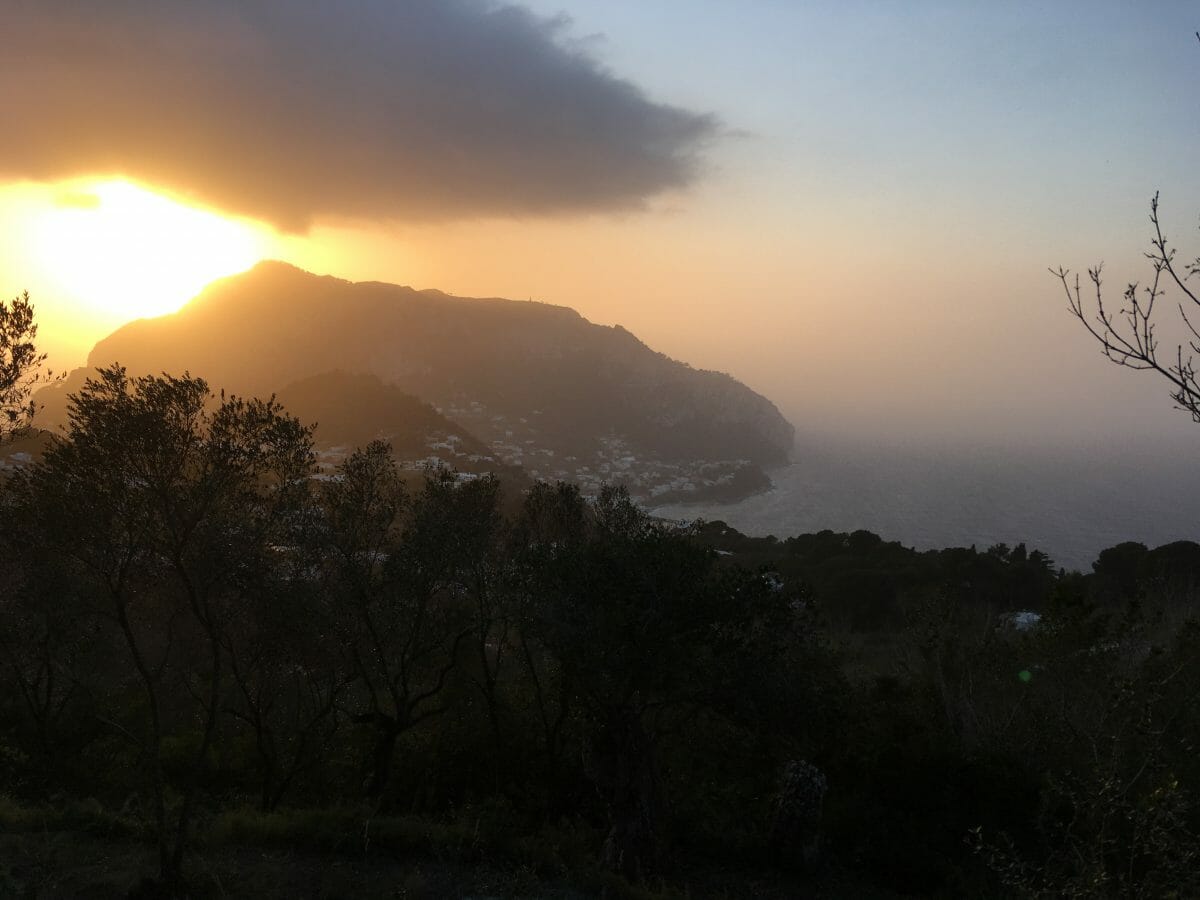 I experienced three days of extremely high winds (glad I stayed–avoiding the pounding ferry ride back to Naples) bringing in unusual evening lighting. 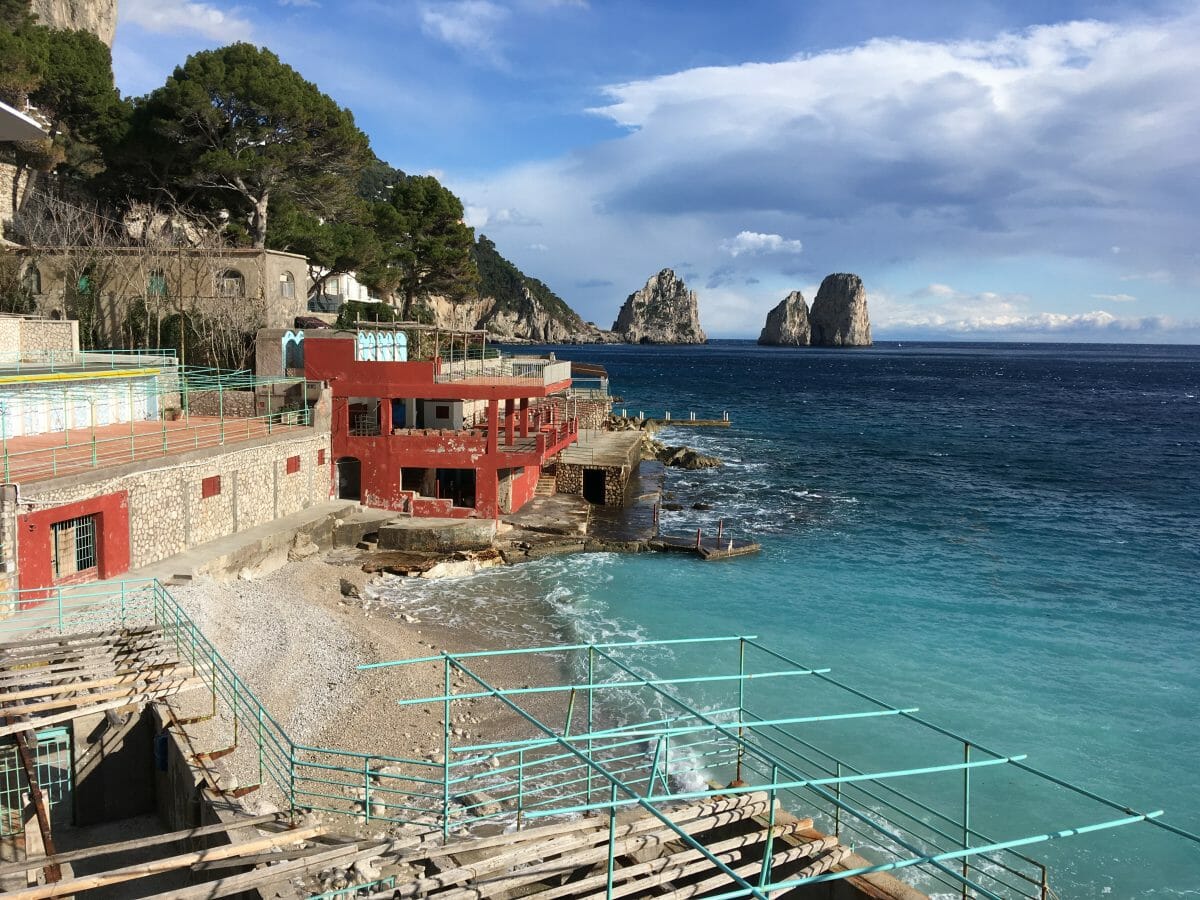 My fourth (third hike) day was down to the south side of the island to Marina Piccalo or “Small Harbor.”  This place is packed in the summer with hundreds if not thousands of boats and tourists swarming about–which is why I travel at this time of year. 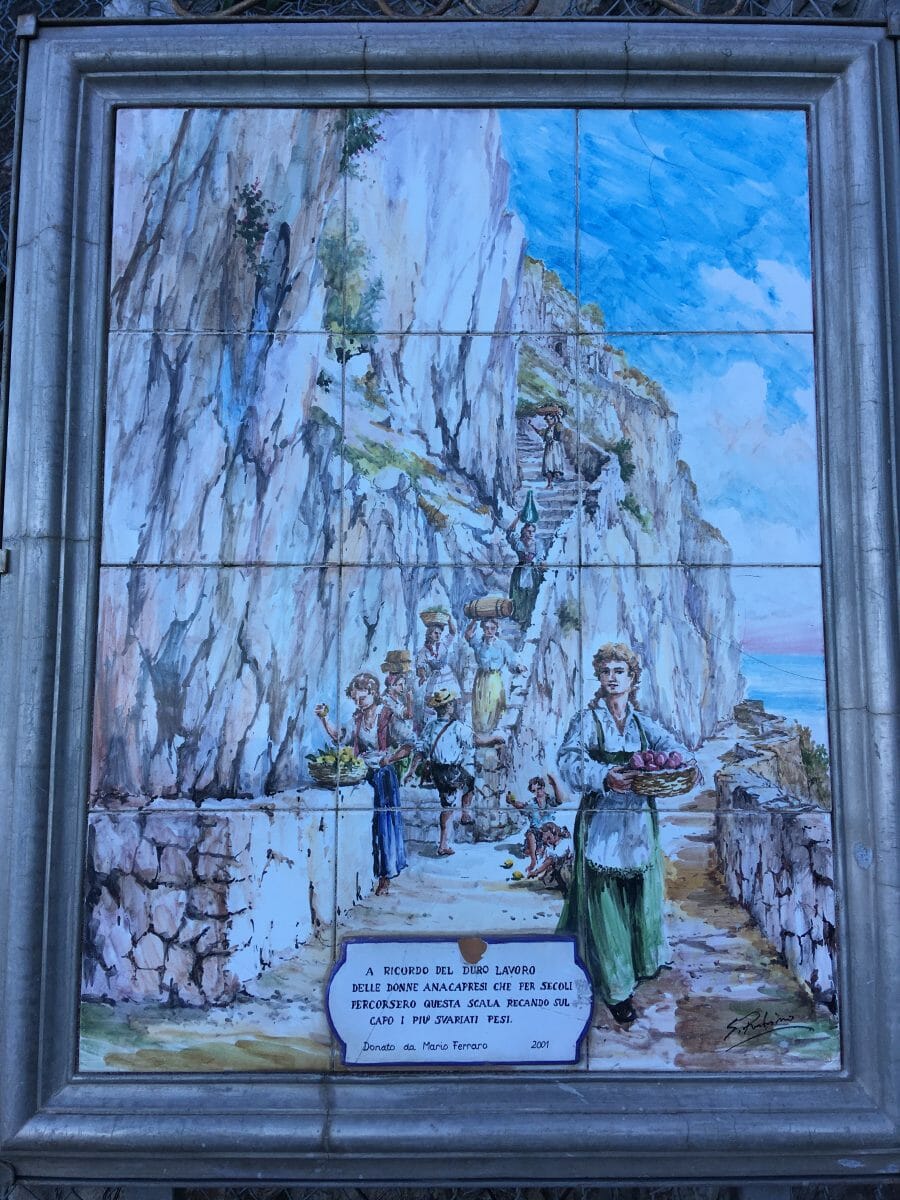 And my fourth hike was up to Annacapri which is a hairpin road and very dangerous–so dangerous, that I take the bus down and even that was dangerous, putting my life in another’s hands. 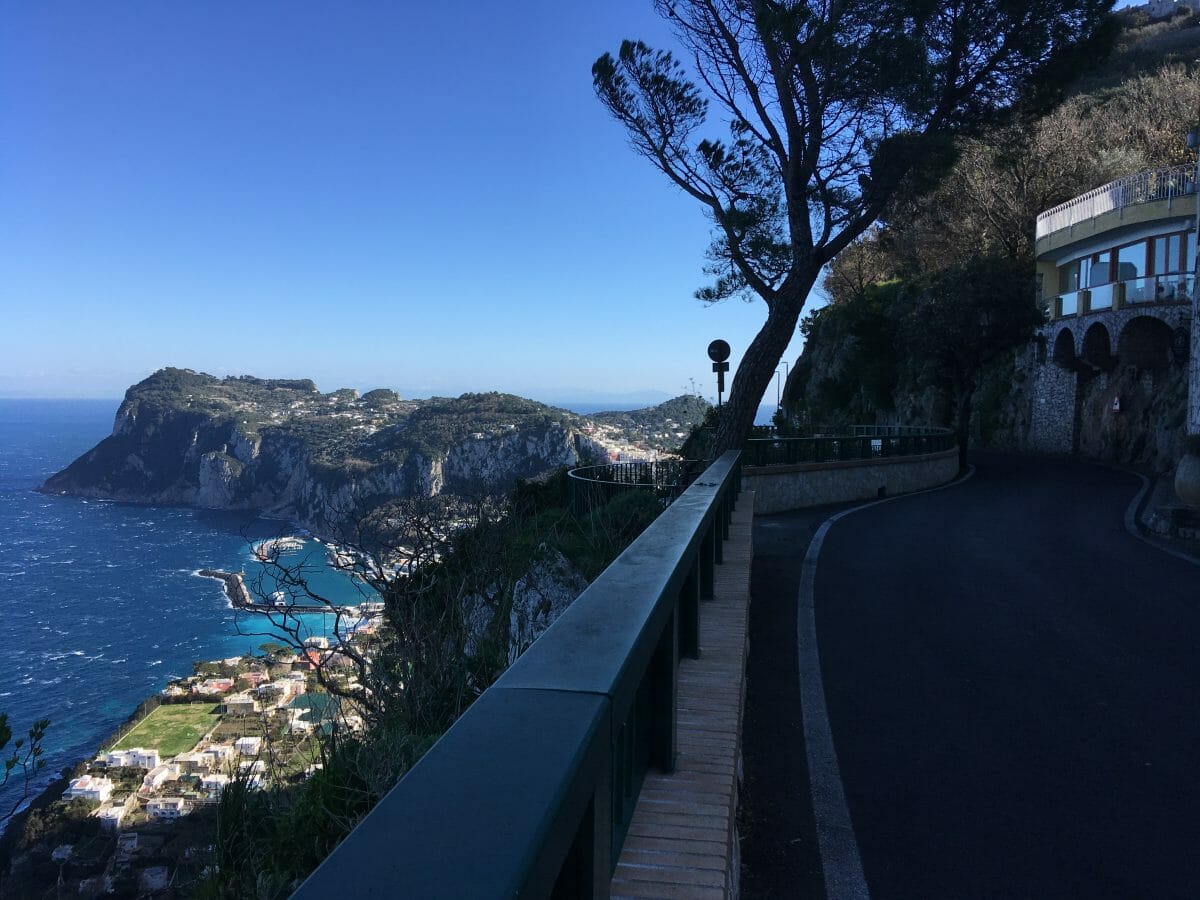 This is that road–it is a good 500′ drop into the Tyrrhenian Sea and motorcycles come roaring around the corner.  OK–here’s the rest of how to get here and back:  There are essentially two speeds of ferries–several companies compete for passengers and there are literally four ticket booths–all cheek by jowl together and all selling the exact same thing.  And the fast catamaran is cheaper–about $18 E.  Take this ferry and when you arrive at the Grand Marina, grab the city buss for $2 Euro up to Capri Sentro–about a mile above you.  Cabbies want $20 E for this same ride and the busses run every 15 minutes.  Book using bookings.com ahead of time.  Don’t travel here between mid-April and October–you won’t find air. to breathe.  The winters are perfectly warm–sometimes brisk–but it’s the perfect trade-off and a comfortable climate to hike.  The little Mercados near the Sentro are higher priced but very convenient.  Dozens of little shops offer just about anything you can possible eat and enjoy.  Enjoy!  (I’ll be editing this over the next week so check back–I’m currently in Rome northbound to Venice tomorrow, then across Eastern Europe to Istanbul.