Oslo and the Legend of Lutefisk

Oslo Norway feels like home, except my understanding of Norwegian has faded since my college courses in 1970–taken exactly 50 years ago.  I took the 101 and 102 course simultaneously and passed both with flying colors.  One of the first places I visit is the Viking Museum which is conveniently located next to the Fram and Ken Tiki Museums.  My old college friend, who prefers to remain anonymous, greets me at the Central Station–and we immediately head for a local restaurant where Lutefisk is the specialty! 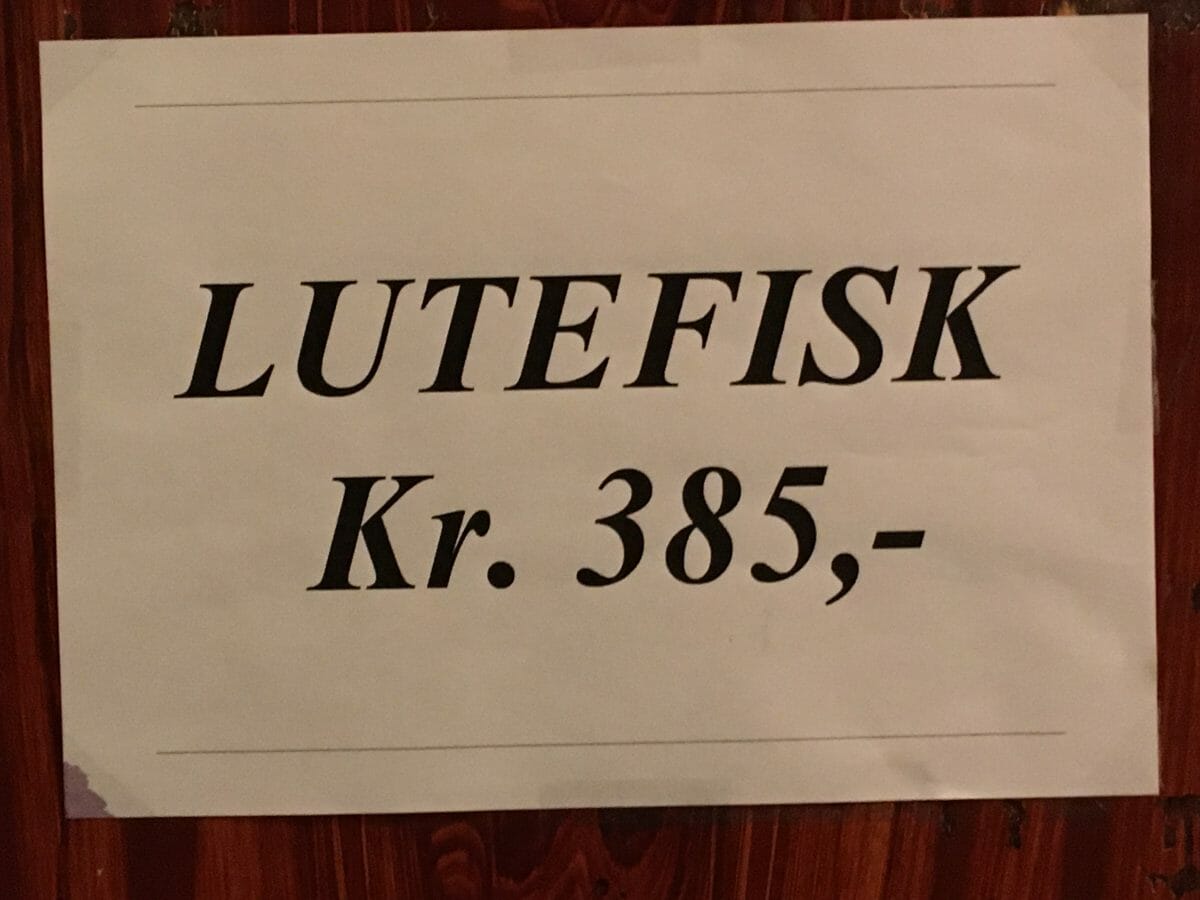 This is about $40.  Food (and everything else) is very expensive here in Norway.  Likely the result of a huge oil boom which continues to fuel their economy, albeit with cheaper prices for a barrel of oil.  With this money, Norway has wisely invested in infrastructure, including a phenomenal road system with tunnels everywhere.  They just opened the longest tunnel in Norway last night (December 30) which is almost 15 kilometers long connecting Stavanger to Strand in southern Norway.  It’s both the longest and deepest undersea tunnel–about 300 meters below sea level.  The longest tunnel in Norway is the Laerdahl tunnel at 25 miles in length north of Bergen–I’ve driven this one and it’s a whopper.  So what’s this got to do with Lutefisk? 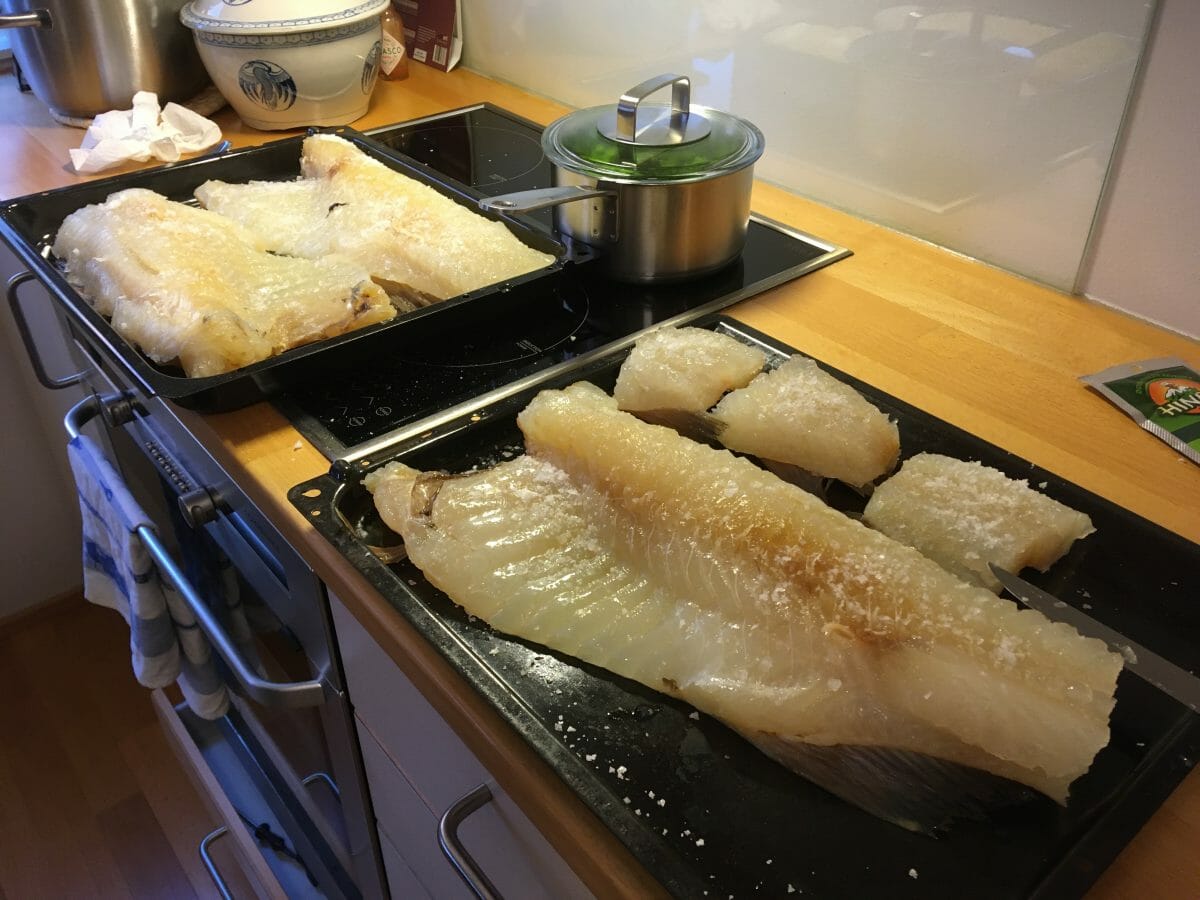 Absolutely nothing.   Lutefisk is a lye cured codfish that is later boiled and served up with potatoes and mashed peas (more on peas later).  I order the traditional assorted holiday meats or julematten. 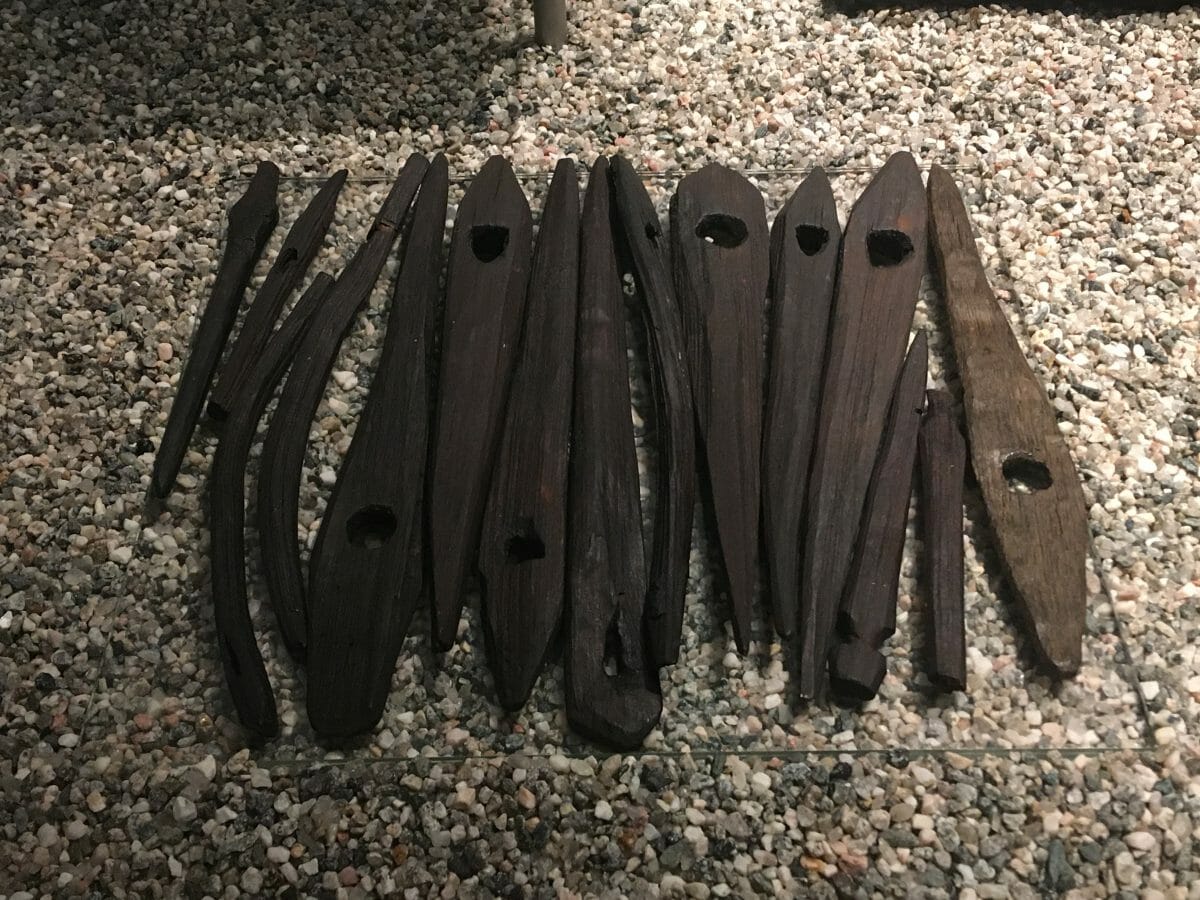 About 6 years ago, I visited the Viking Museum and noted that these rope tighteners were mis-labeled.  These Vikings are losing their culture…… 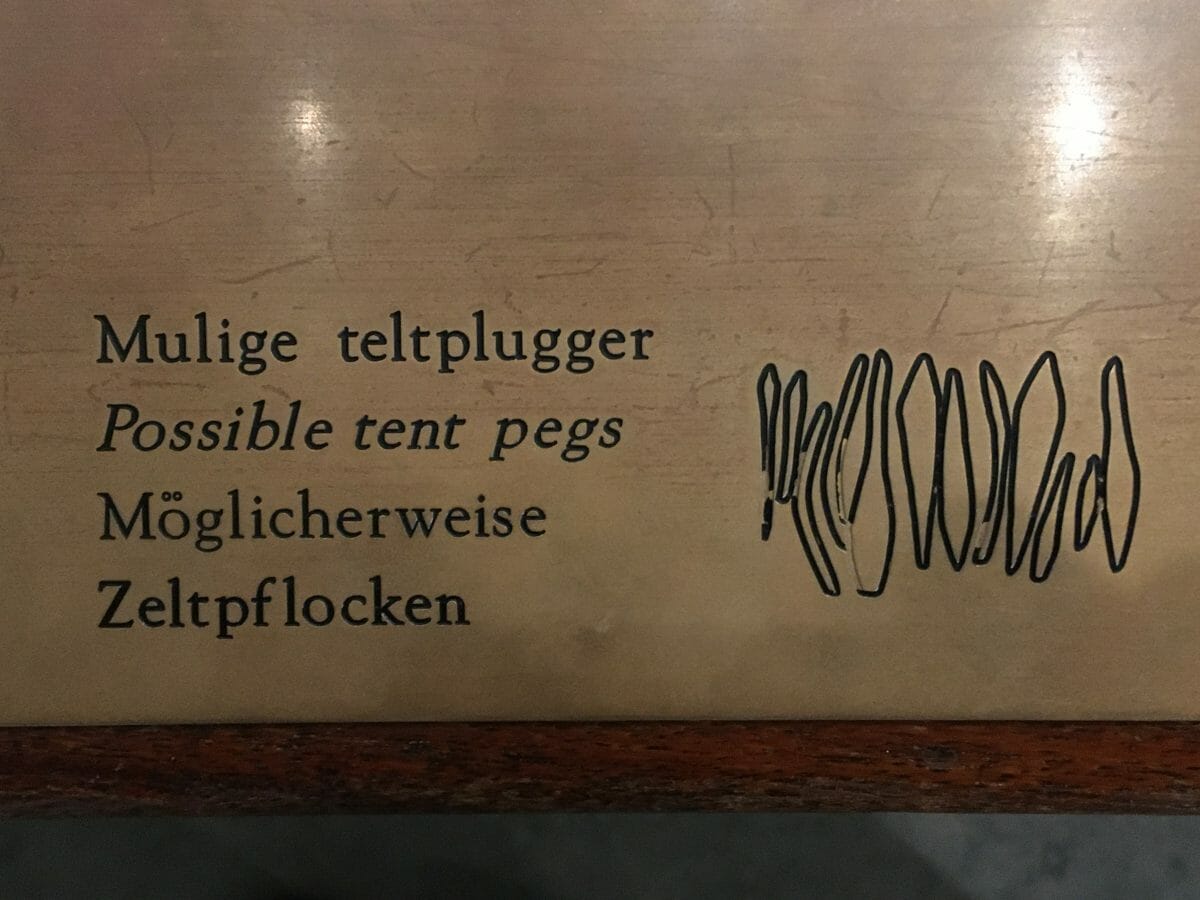 These are not tent-pegs!   Visit my earlier post here for the real story.  Faux News! 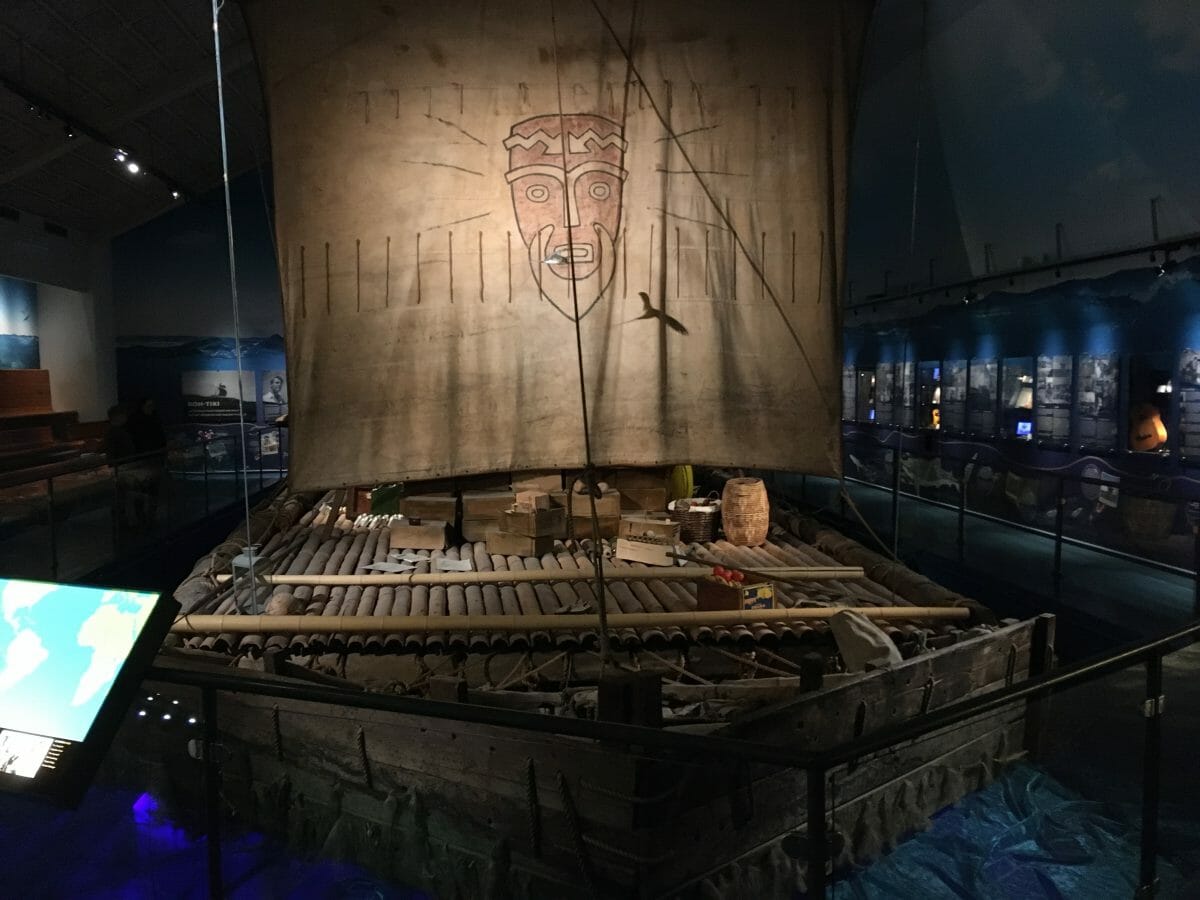 Down the street–a 5 minute walk–is the Kon Tiki Museum which houses the original boat that washed up on the reef in Polynesia.  Thor Heyerdahl was everyone 1950s boyhood hero–he crafted this balsa wood raft and drifted from Peru to Polynesia “proving” that Polynesians were really Native American ex-pats.  Well, he got it backwards and no scholars took him seriously….in fact, the anthropology groups wouldn’t even read his paper outlining these theories.  His book American Indians in the Pacific was also backwards, claiming Polynesian connections with the Tlingit and Haida.  In spite of his theories, he is perhaps Norways most beloved citizen along with Nansen, Amundsen and Edvard Grieg. 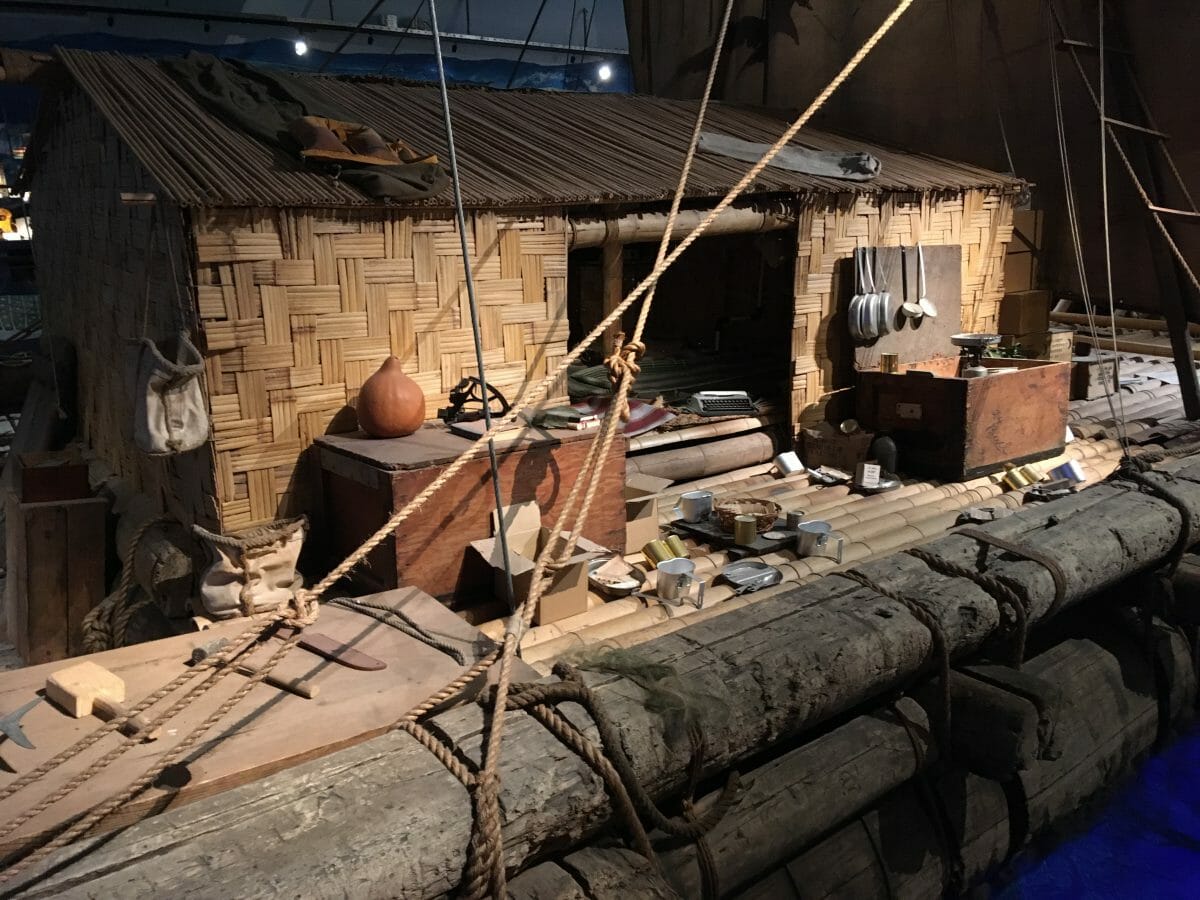 But he built this cool boat–a Tom Sawyer like affair.  It didn’t steer with a hoot which is why they crashed on the reef.  Fortunately they salvaged it placing it in the museum here. 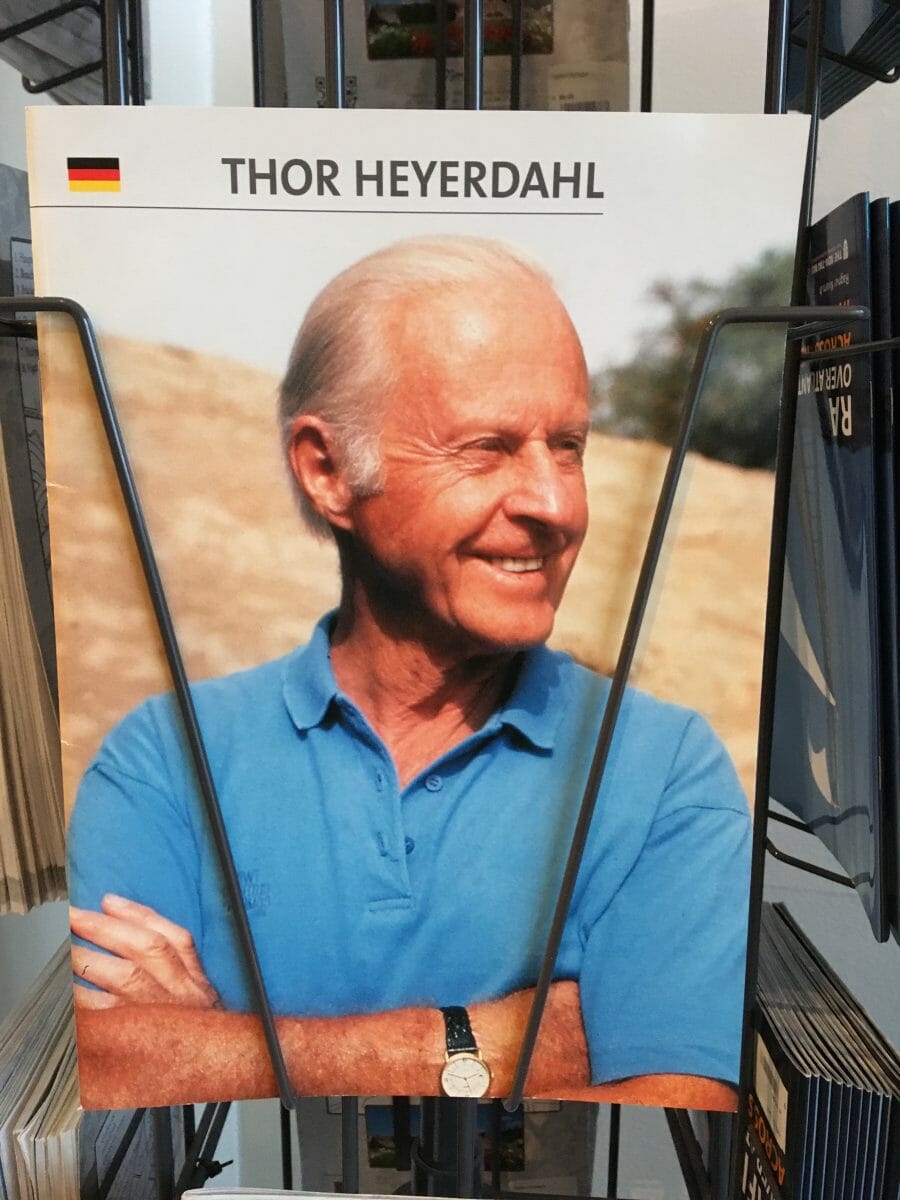 Now, if I didn’t know better, I would say this is Joe Biden.  Or maybe Joe Biden is really Thor Heyerdahl? 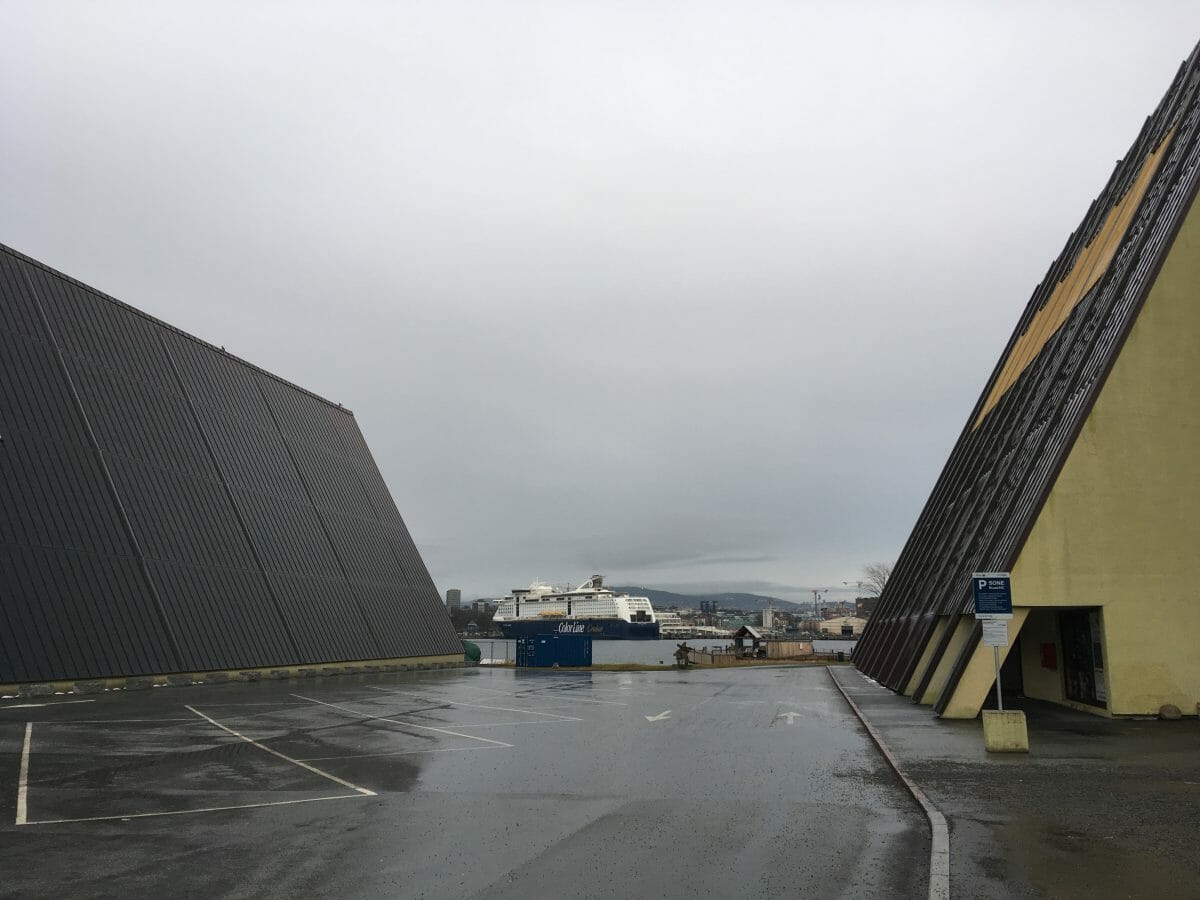 I’ve got to put a plug in for Norwegian boats, ferries and the like.  Here is the Sun, which is a cruise ship still working throughout the Norwegian winter.  While America ties theirs up (Alaska ferries in particular), Norway runs a full Stena liner from several ports every day.  The Stena line I took up from Denmark (Frederikshavn) was absolutely full–about 500 people and car decks also full.  It returns the same night to make the journey the next day.   I hope Alaska Governor Mike Dunleavy reads my blog. 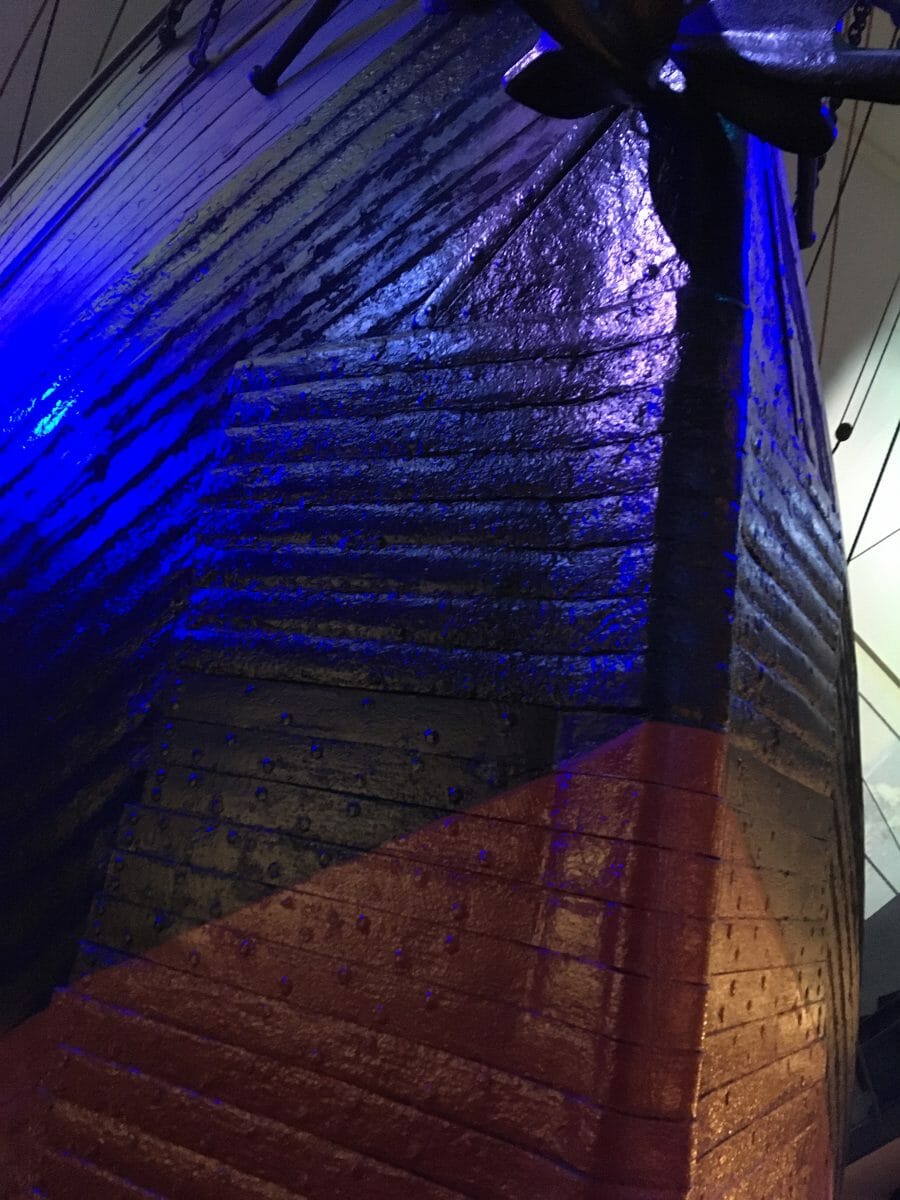 The Fram was Fridtjof Nansen’s boat that he used 120 years ago explore the Arctic, then lent to Amundsen who took Fram to Antarctica in his famous race to the pole against Robert Scott. Amundsen had this custom built by Colin Archer.   Check out the massive planking and ice sheathing.  The internal structure of the boat had counter-angled (for lack of a better word) beams to keep her from being crushed in the ice.  Amendsen had previously taken the Gjoa through the NW passage–the first transit–spending four years in that endeavor reaching the Beaufort/Chukchi Sea in 1906.  Both Gjoa and Fram are exhibited next to Kon Tiki museum.  These guys were tough! 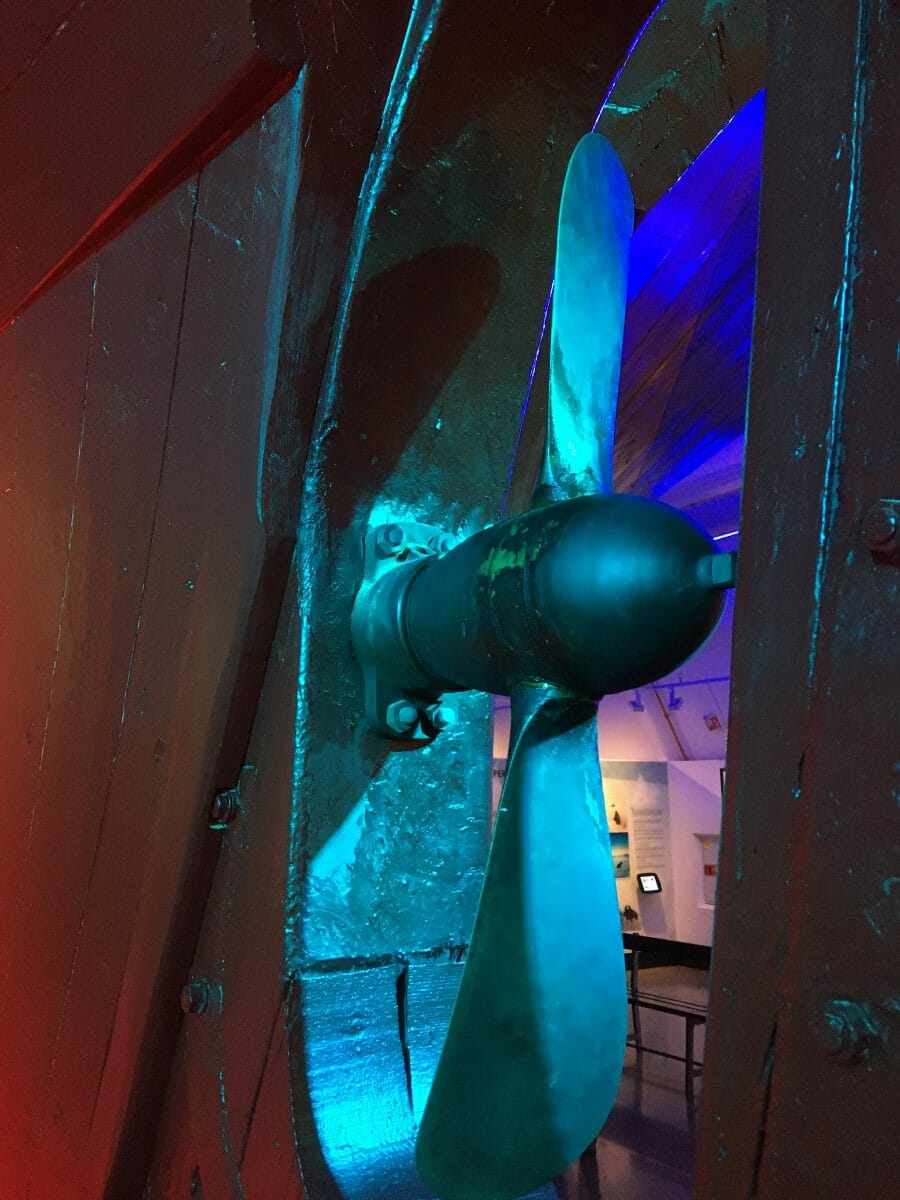 The Fram’s propeller–about the same size as my Oster blender……   The Fram was originally steam powered but Amundsen had it converted to diesel before his trip. 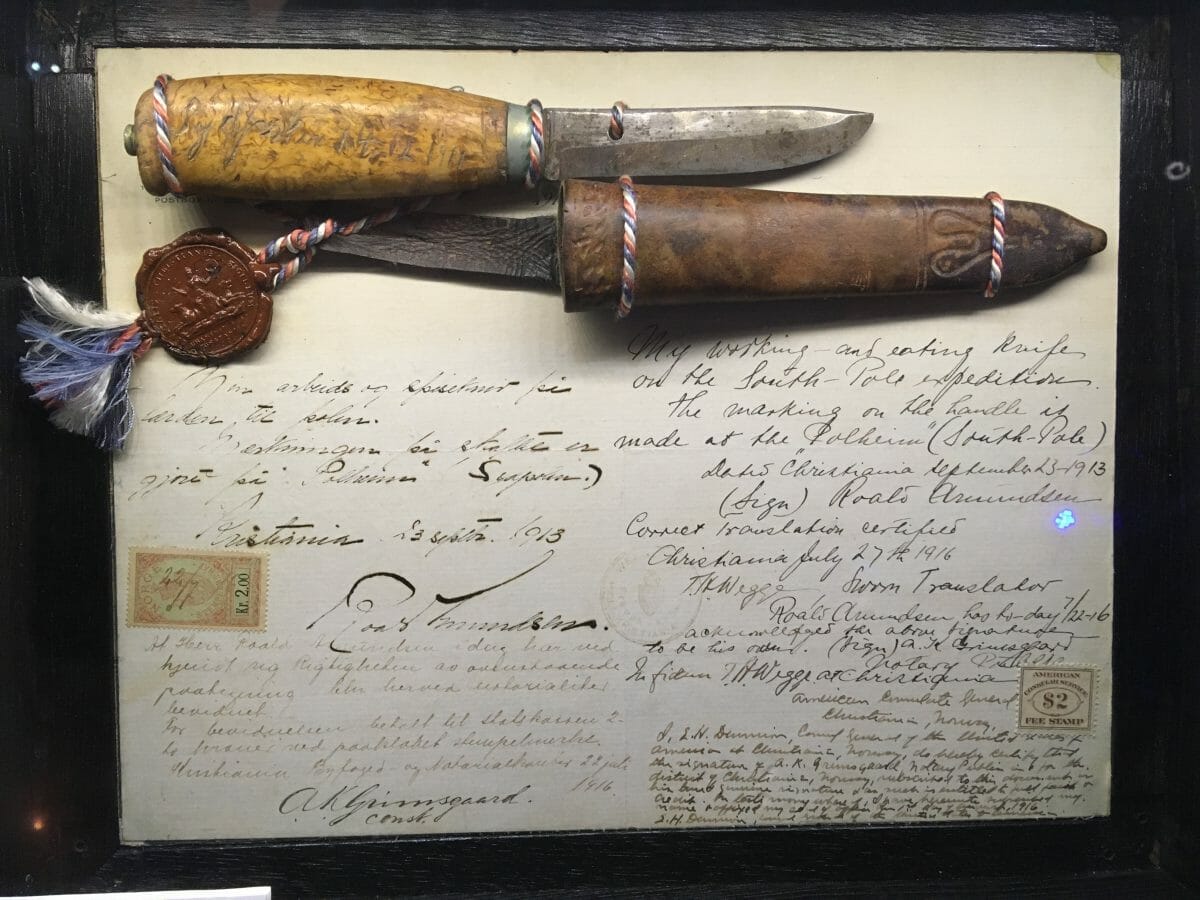 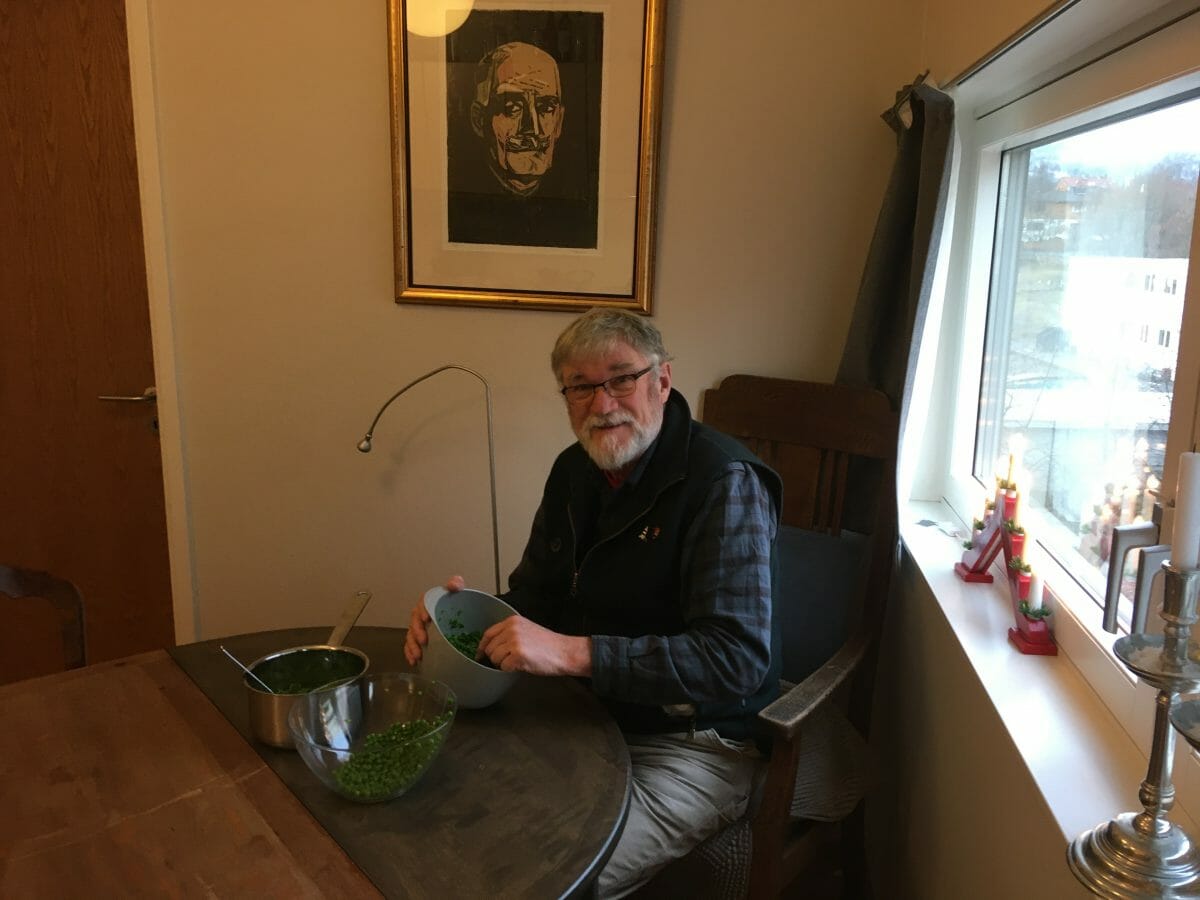 Doug mashing peas.  OK, this is not a scholarly treatise but the Brits and Norwegians for some reason like to mash their peas (the Scot’s like to smash them or perhaps it’s the other way round).  It’s tedious work and burns as many calories as the peas provide…..a net zero in food processing (or zero carbon footprint of peas). 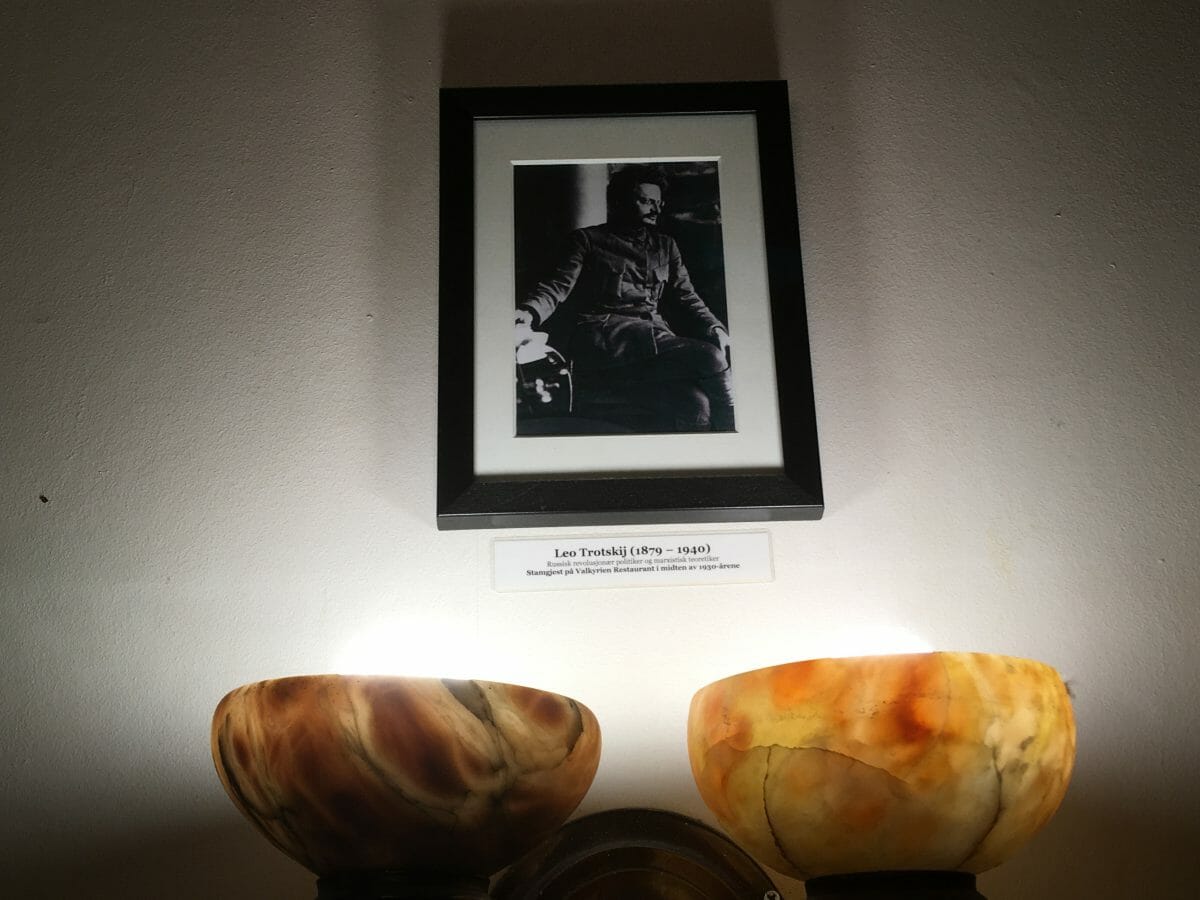 One of my host’s favorite pubs Valkyrien is where Leon Trotsky used to hang out when he was in exile.  It boasts a piano which I played, and then a Norwegian local took over–frolicking good time. 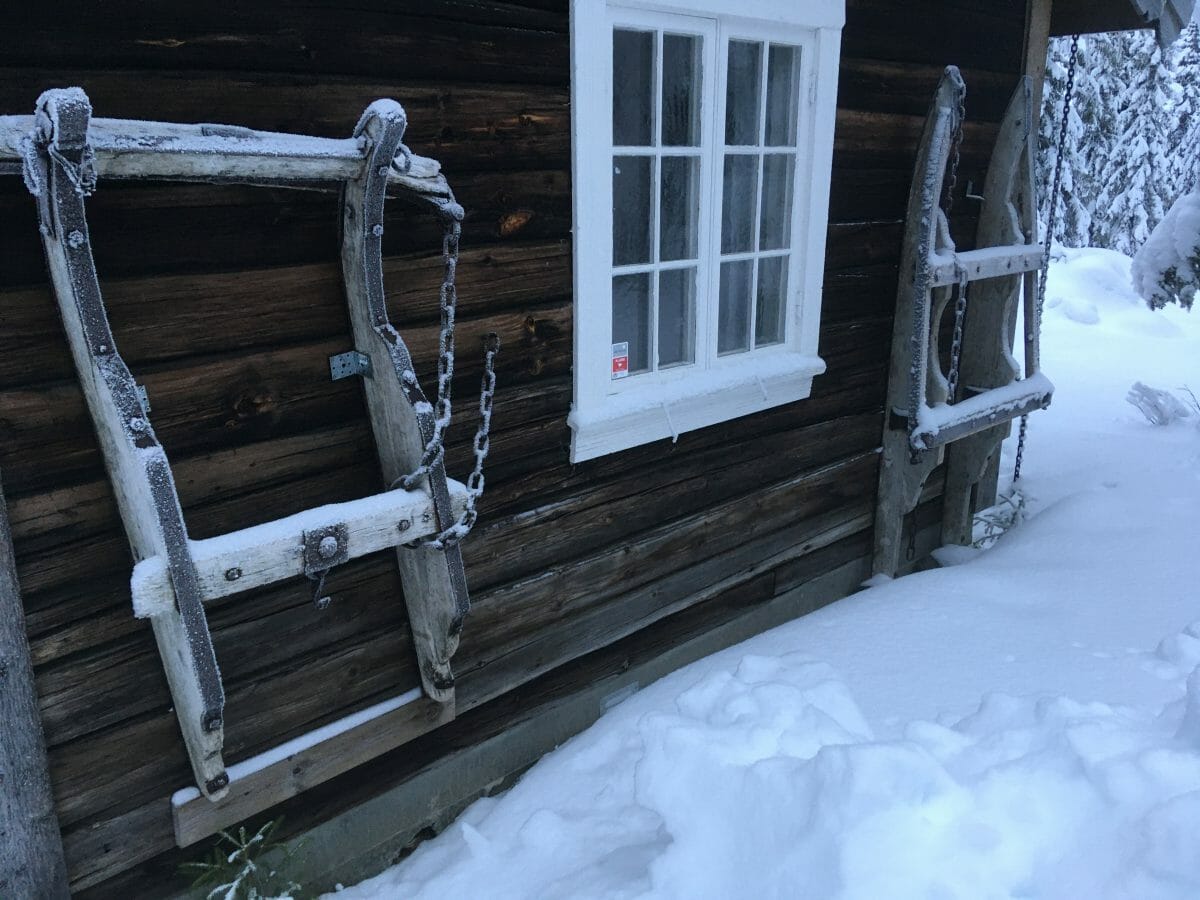 My host invited me to visit his hometown in Fagernes and he still has a small hytte there.  These two implements, towed by a horse, are called a “buck” and a “goat” and used to carry logs out of the forest.  His hytte is rebuilt from old logs from an adjacent farm. 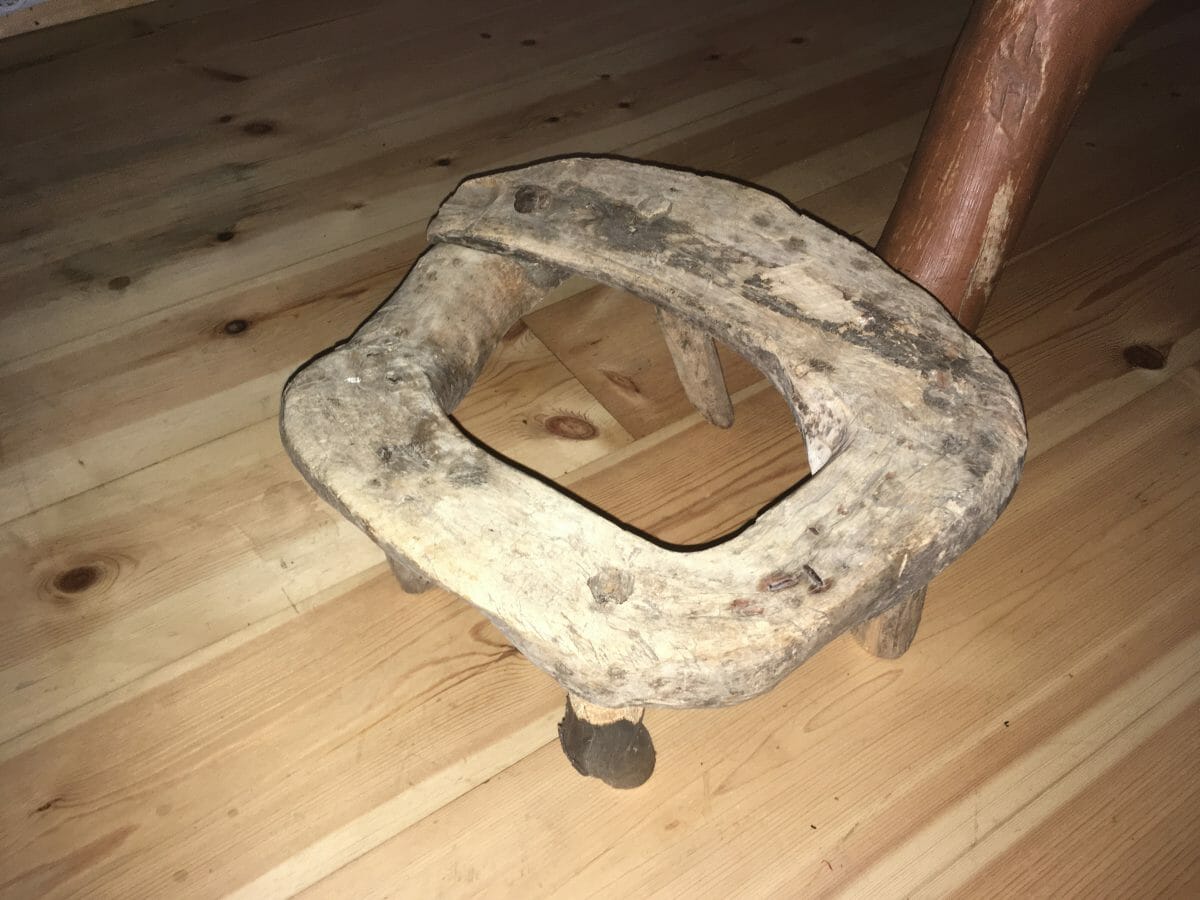 We spend the night amidst his old farm antiques including this milk stool his mother used, built out of one piece of wood and still intact;  the stool, and the farm.  Good Norwegian camping at its best! 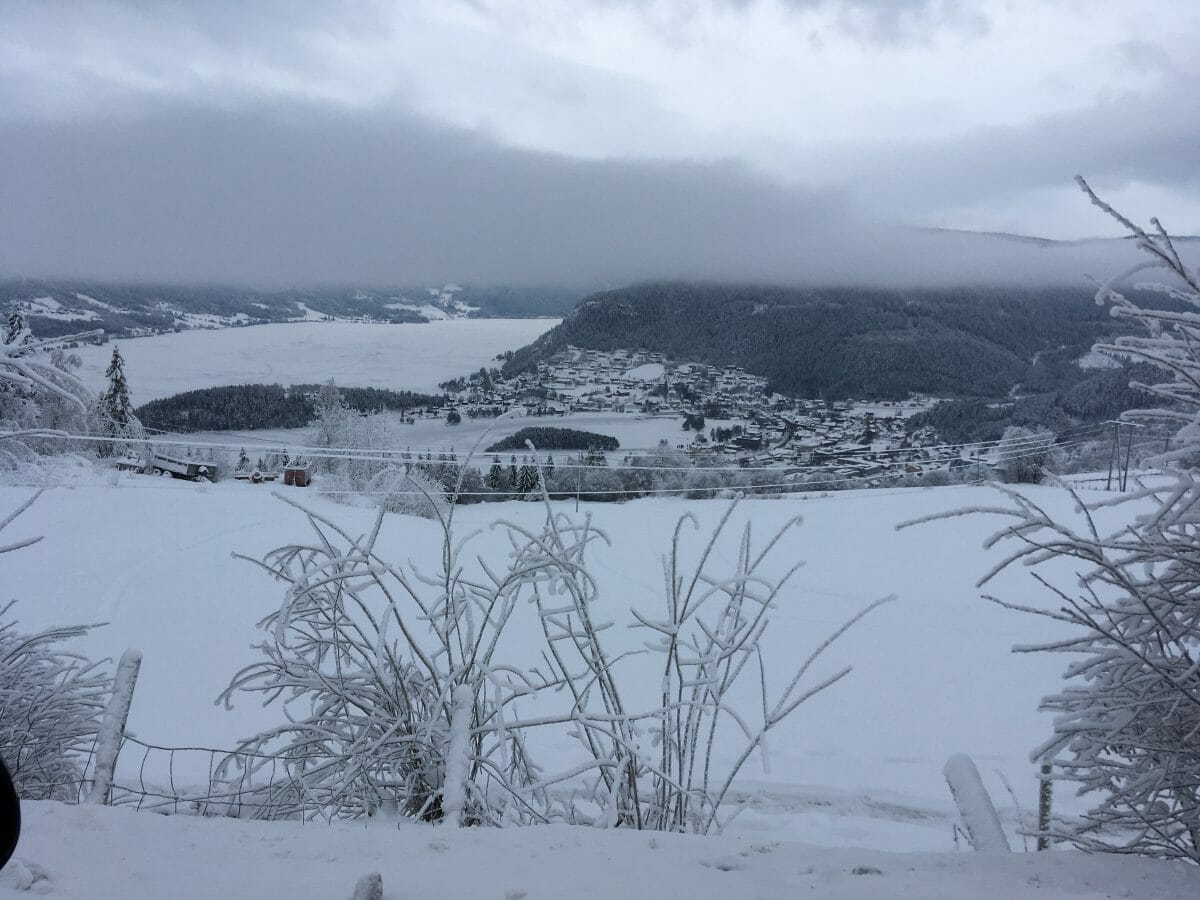 Fagernes Norway after two feet of snow.  The valley is Valdres where Fagernes lies and is west of, and lies parallel to, Lillehammer where the 1994 Winter Olympics were held.   Back to Oslo…..