Let’s start with the British Museum and their largest draw–the Rosetta Stone.  At 9:30am, the doors opened and this stone was mobbed by Asian tourists, faces planted in their camera/phones filing by taking selfies.  After the place cleared, I moved in for this photo.  The Rosetta Stone is a lot larger than I thought–about 4′ high.   Three languages together on the same stone deciphered Egyptian hieroglyphics–visit this museum. 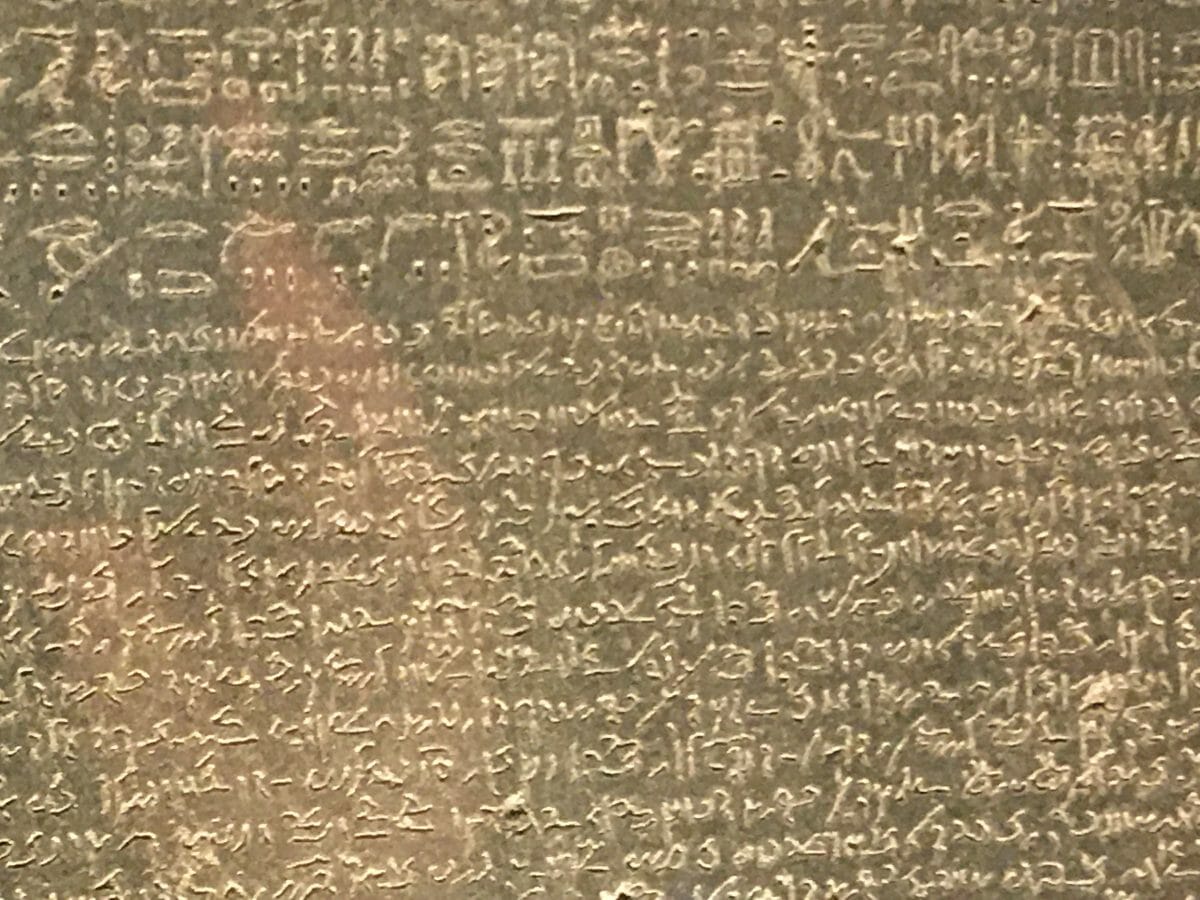 There is a lot of writing here and this stone is simply a small fragment of a much larger stela.  Wiki says it was discovered in 1799 but I think they mean rediscovered.  The French took this home but after the French Revolution and the British win at Waterloo, this came “home” to London.   Ranger Doug, being a true believer in keeping art in context, thinks this should be returned to Egypt but that’s another argument. 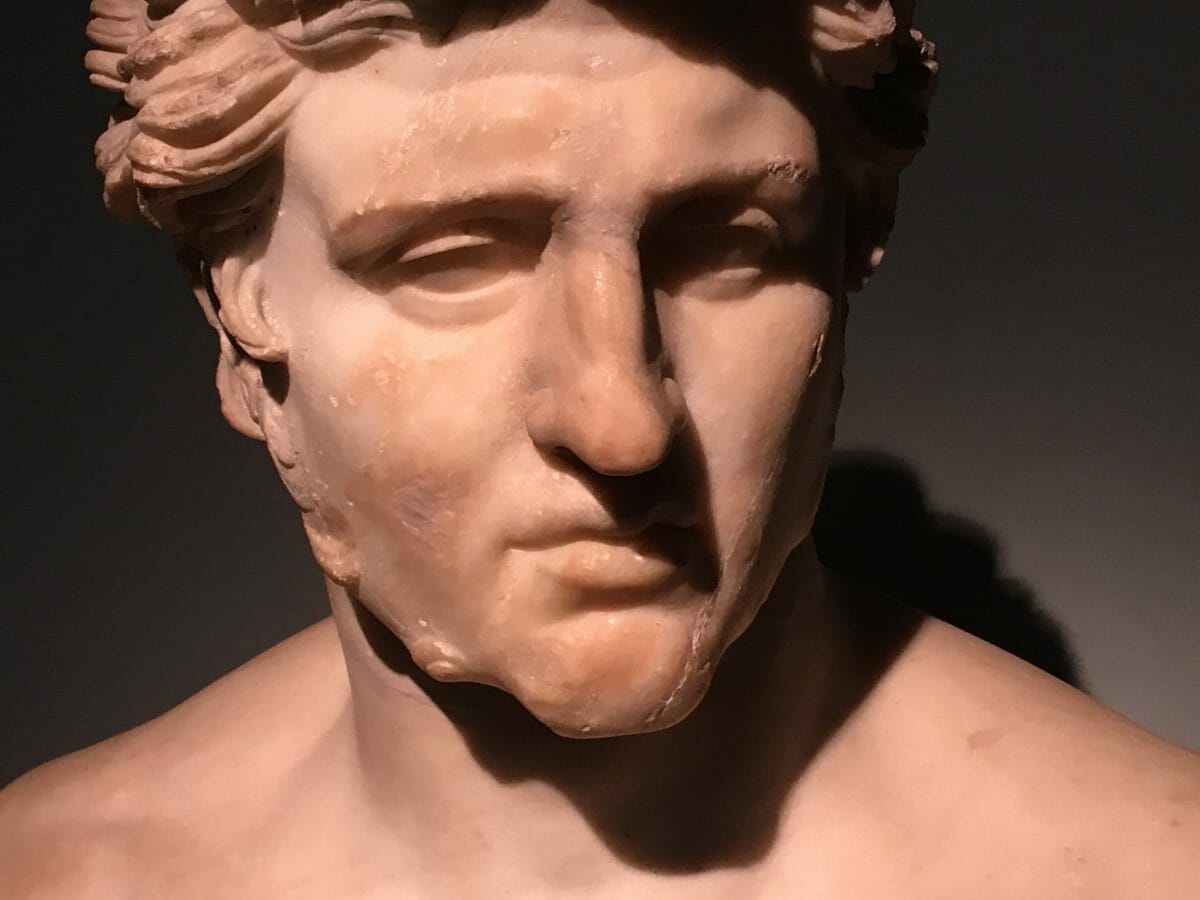 I’m reposting Sylvester Stallone where he belongs, in the British Museum.  It was posted earlier in Scotland, but it’s easy to get mixed up when you’re on the road. 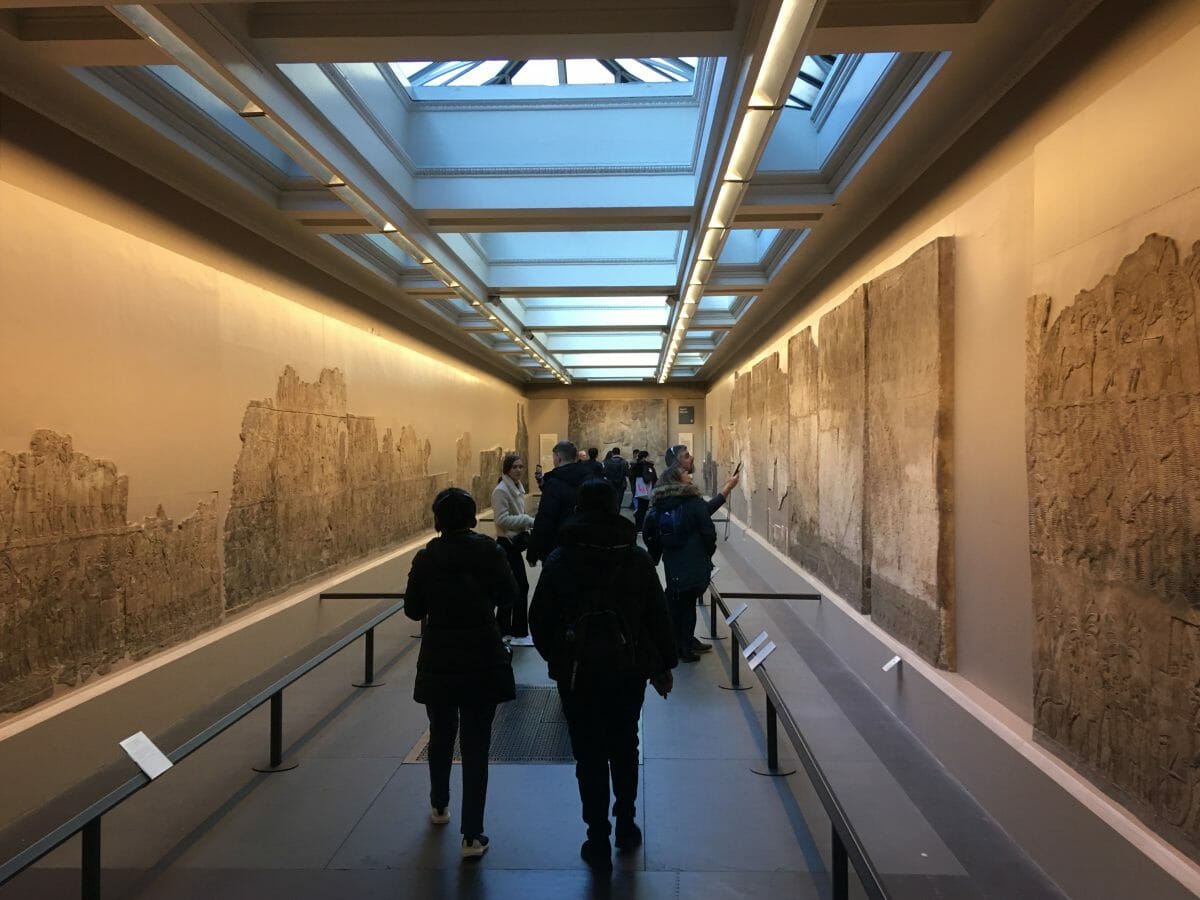 This is where the British should admit to a bit of chauvinistic hubris.  In the 1800s they detached, collected and carted off most of the motif’s or whatever you call these edifices from every building in Rome and elsewhere.  Ditto the mummies in Egypt.   I think it would be good statesmanship, to fess up and return these to their rightful places.  Perhaps it would add to some stability in the Middle East? 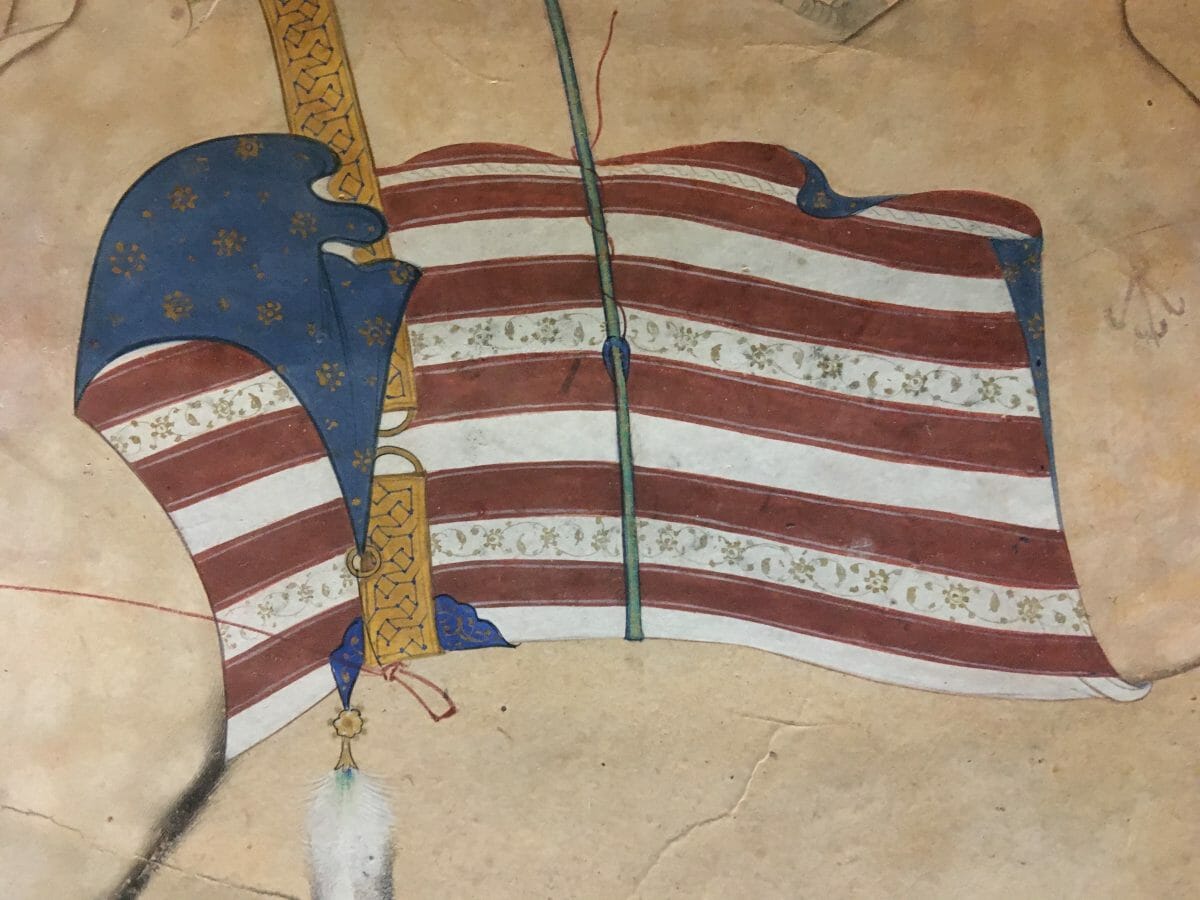 Here’s another bit of revisionist history.  Move over Betsy Ross.  This 1500 AD horse blanket was designed by none other than Riza Abbasi so I’m hereby giving Riza credit for the design of the American flag. 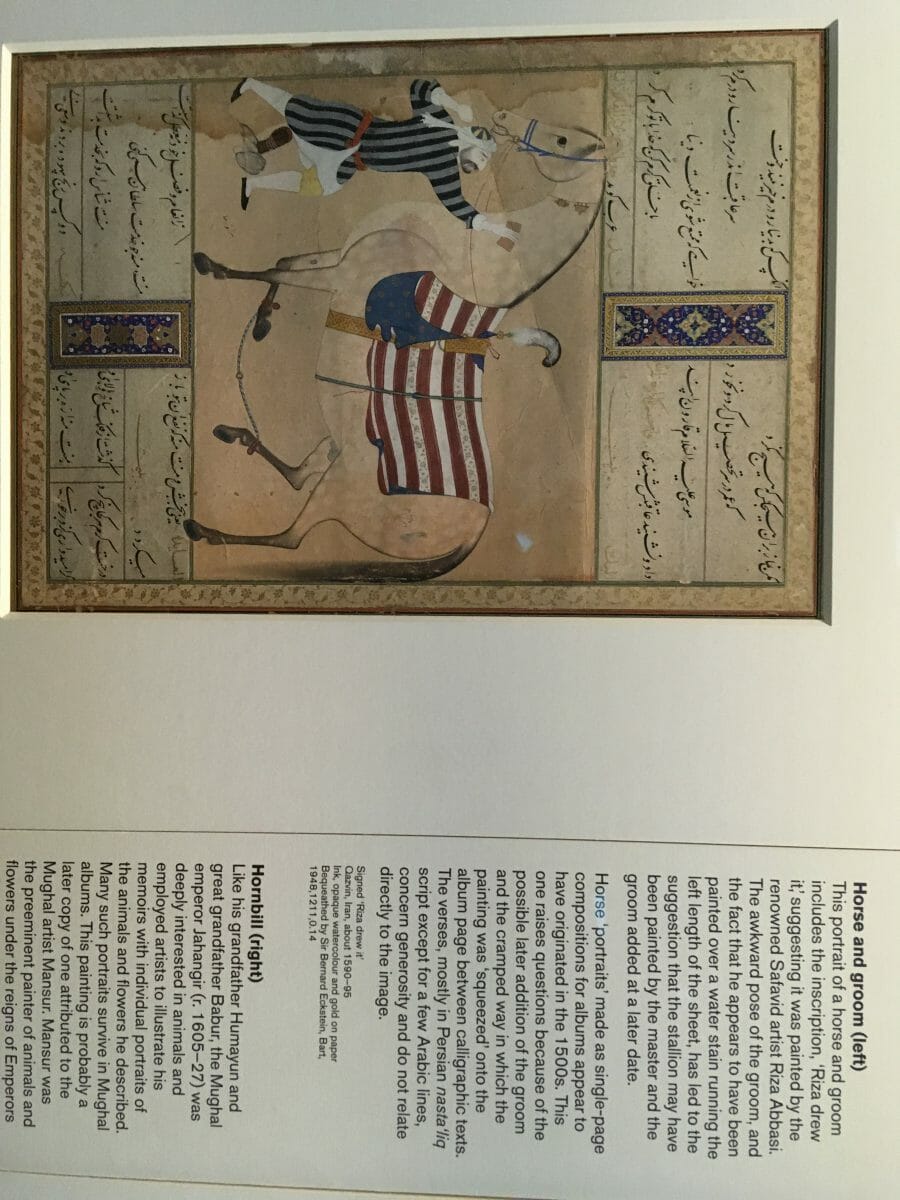 Here is the back-story…… 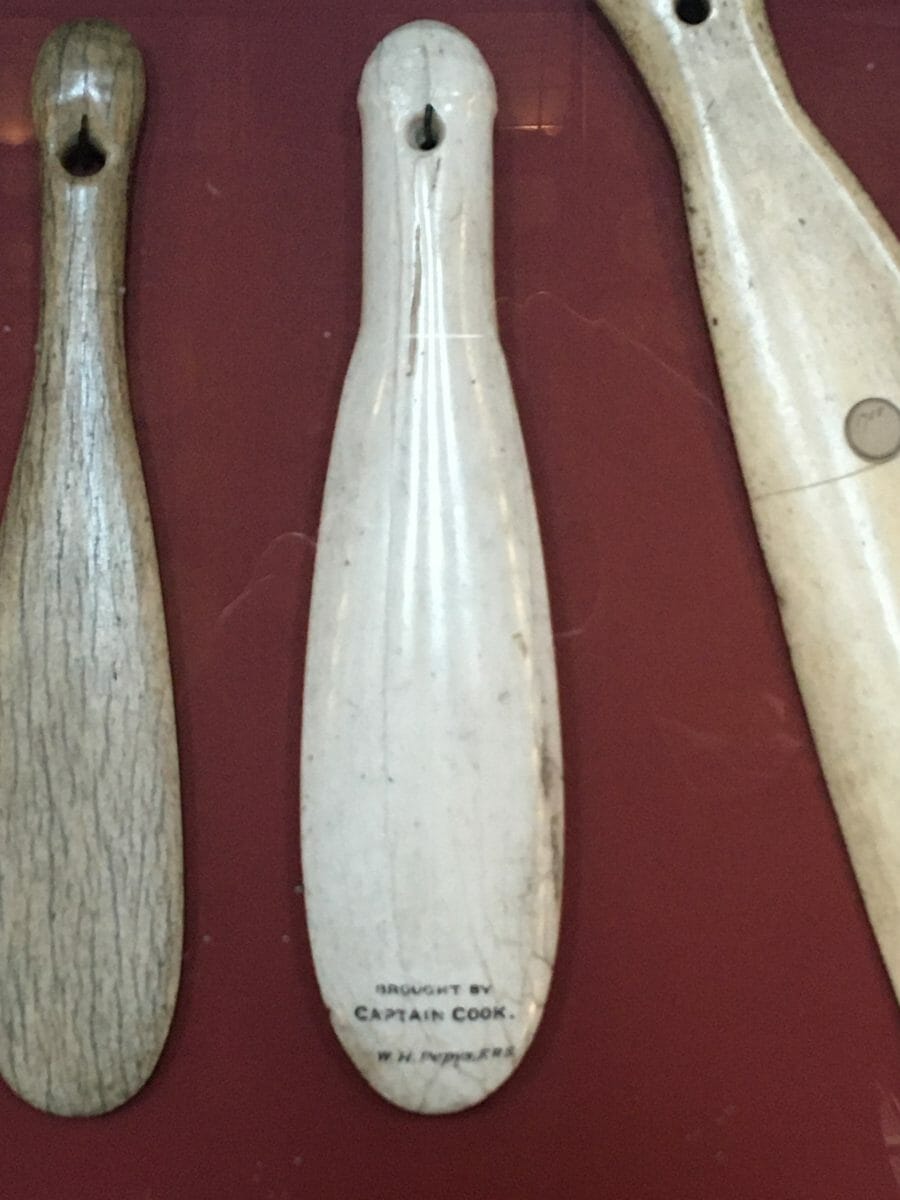 I get a bit tired after about two hours in museums.  If you’re like me, go to this room first–the British explorations of Captain Cook.  Several items carried on their ship and handled by these great explorers are on exhibit; also the mutiny of the Bounty.  Cook met his fate most likely by one of these war clubs.  Sometimes. it’s just better to move on. 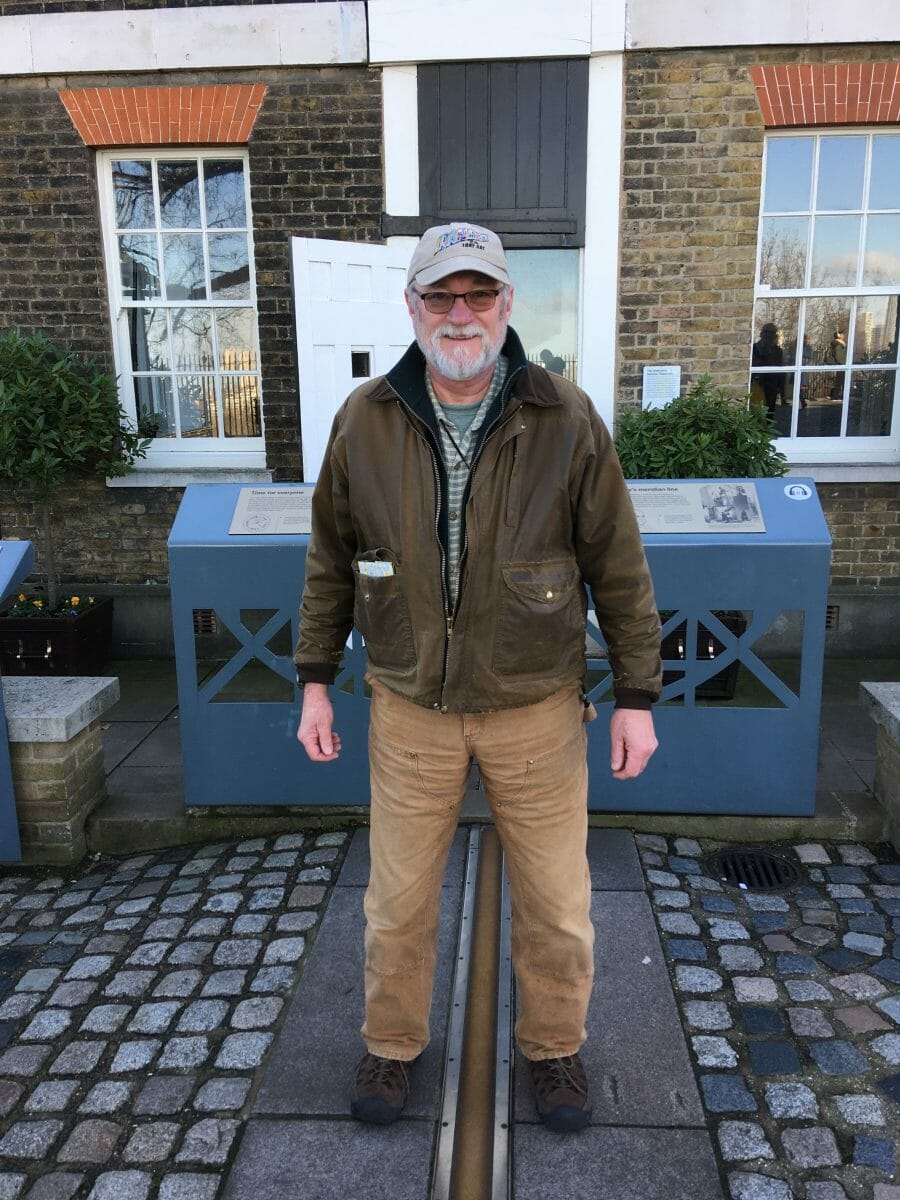 One foot in the East, and one in the West–the Bradley Meridian Line. still in use today.  I’m standing smack-dab in the middle of the Greenwich Observatory.   There are several Meridian Lines and the janitor there told me that due to the Earth’s procession (wobble), that it actually lies about 30′ distant out in the courtyard.  Because of the interplanetary influences, astronomers use sidereal (star) time which is a bit more stable.  Nevertheless, the Earth still wobbles a bit.   Just ask any climate denier. 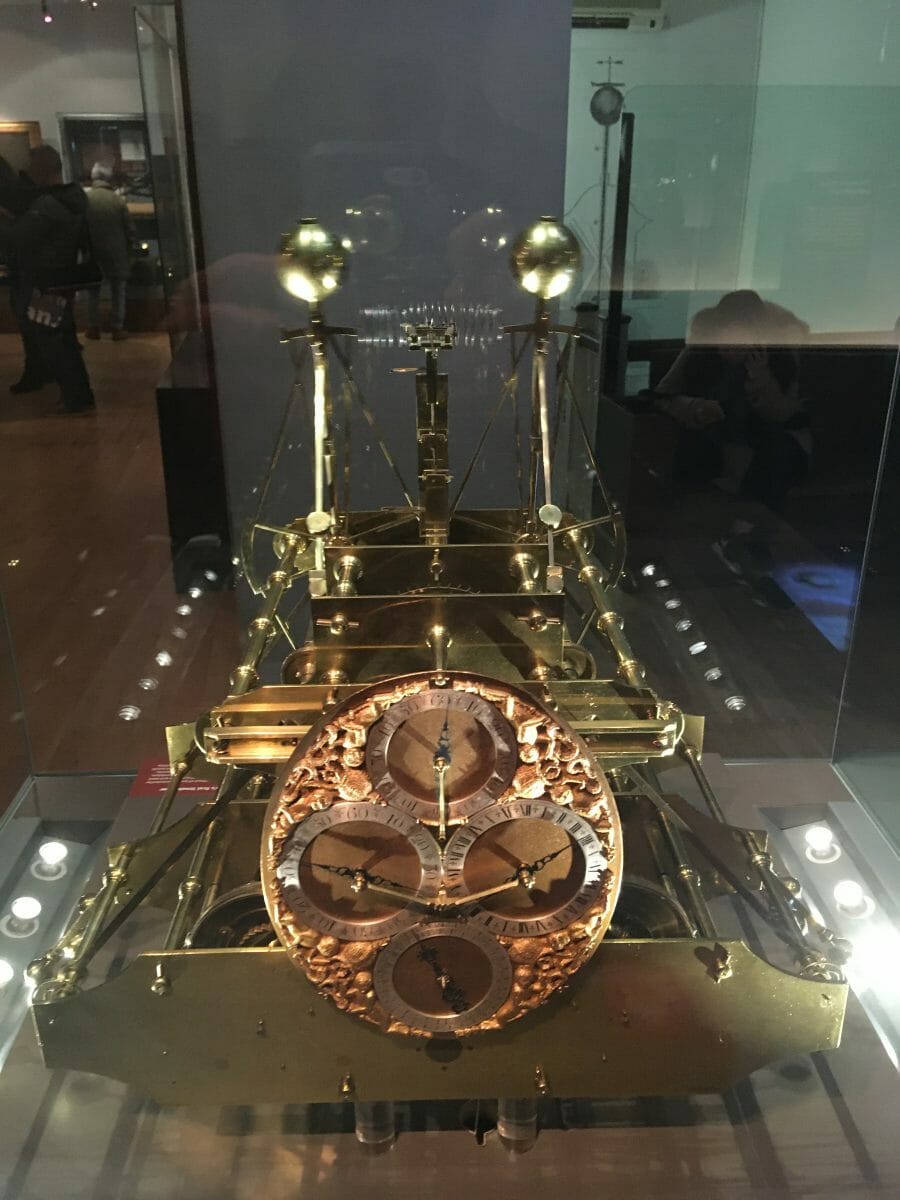 This is the sole reason I visited London–the John Harrison clocks.  Here is H-1 and it is marvelous.  He built four–and all are here in glass cases and still running!  In 1737, King What’s-his-name offered a L20,000 Pound reward–after stacking up three huge British warships and killing 2200 of his men–to anyone who could develop a chronometer that would be accurate to 1/2 second a month, on a rolling, dank ship half-way across the globe,.   This is the first of four clocks Mr Harrison built–not a bad start. 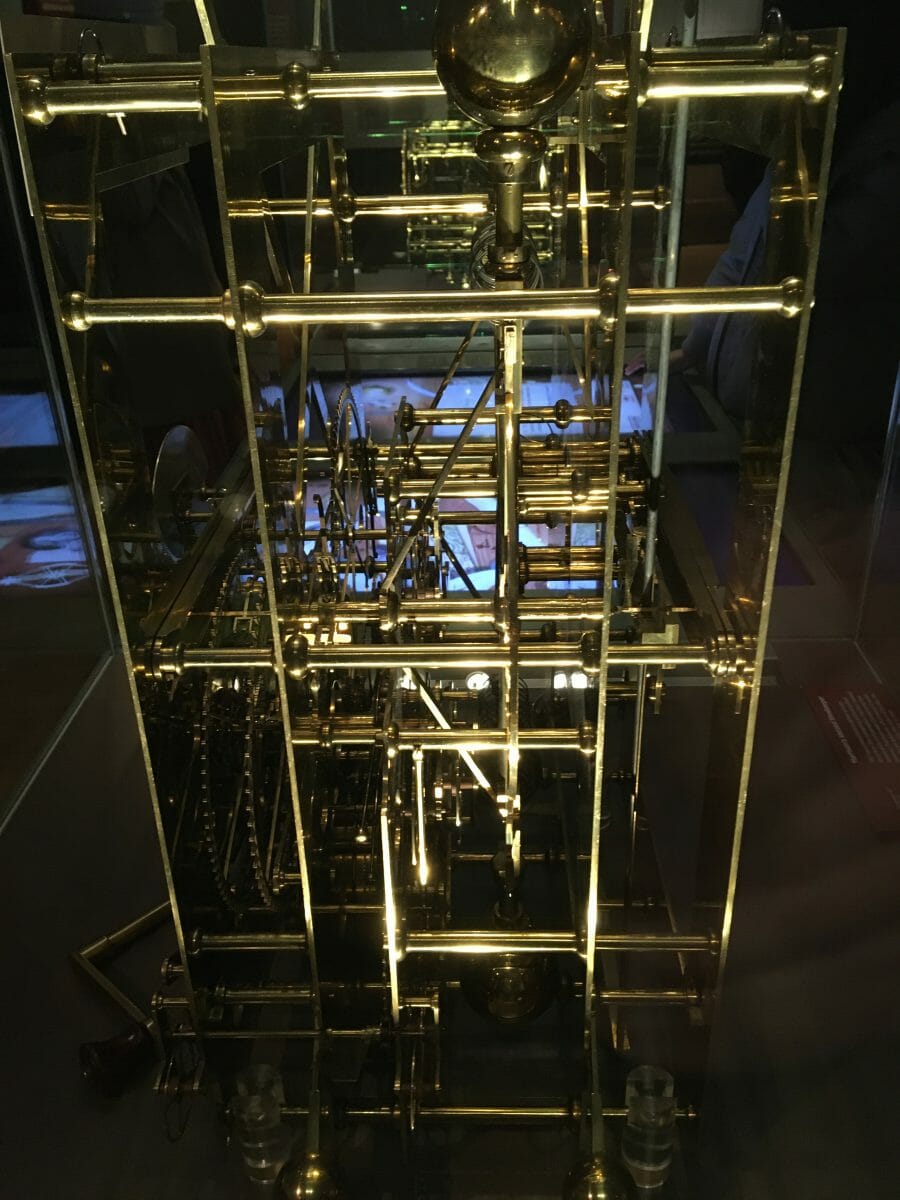 H-2 was even better but still not quite up to standard and not qualifying for the prize.  John Harrison was a self-taught carpenter and Dava Sobel’s book “Longitude,” about him and his effort to solve one of the last maritime riddles, is one you will read in one sitting. 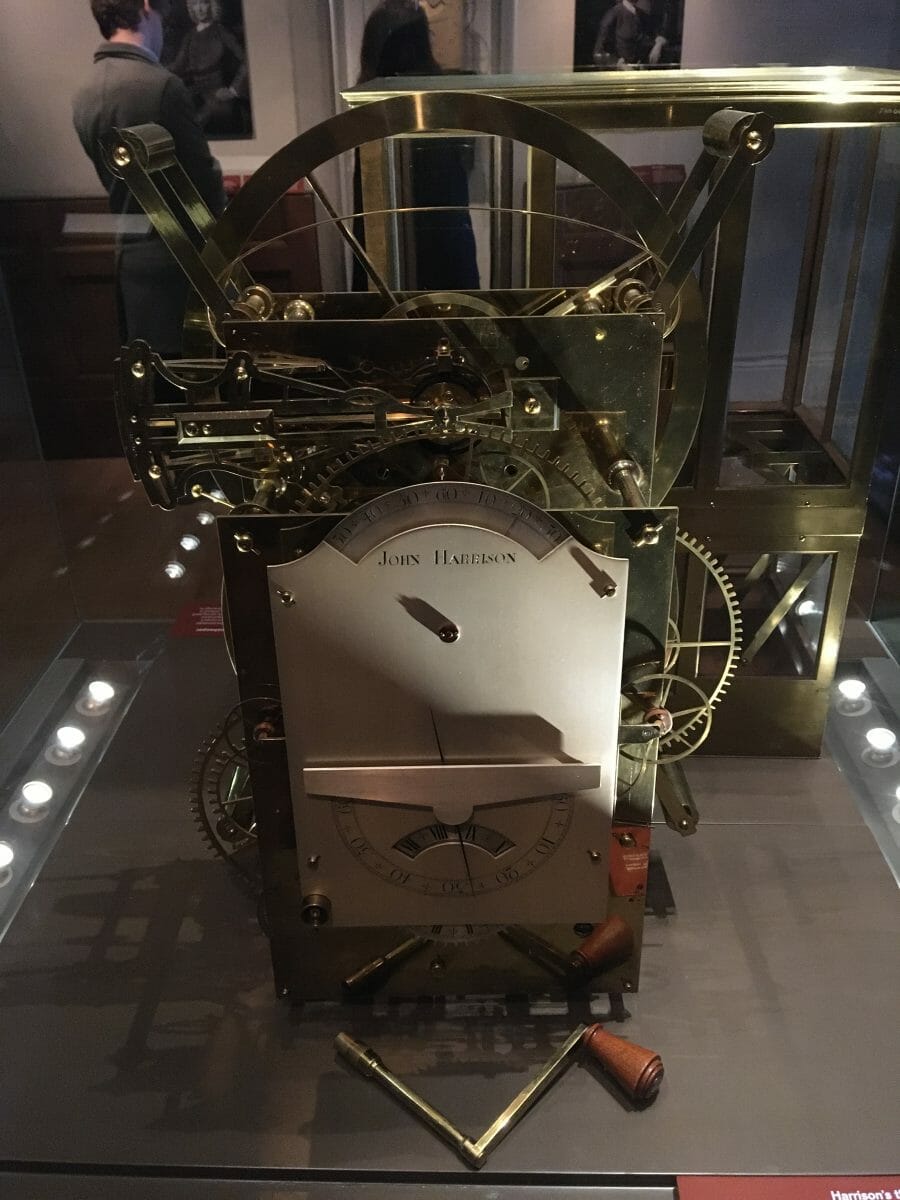 H-3 was the perfect clock and would have won the competition then and there, but it was too big and unwieldy for a small creaky ship so….. 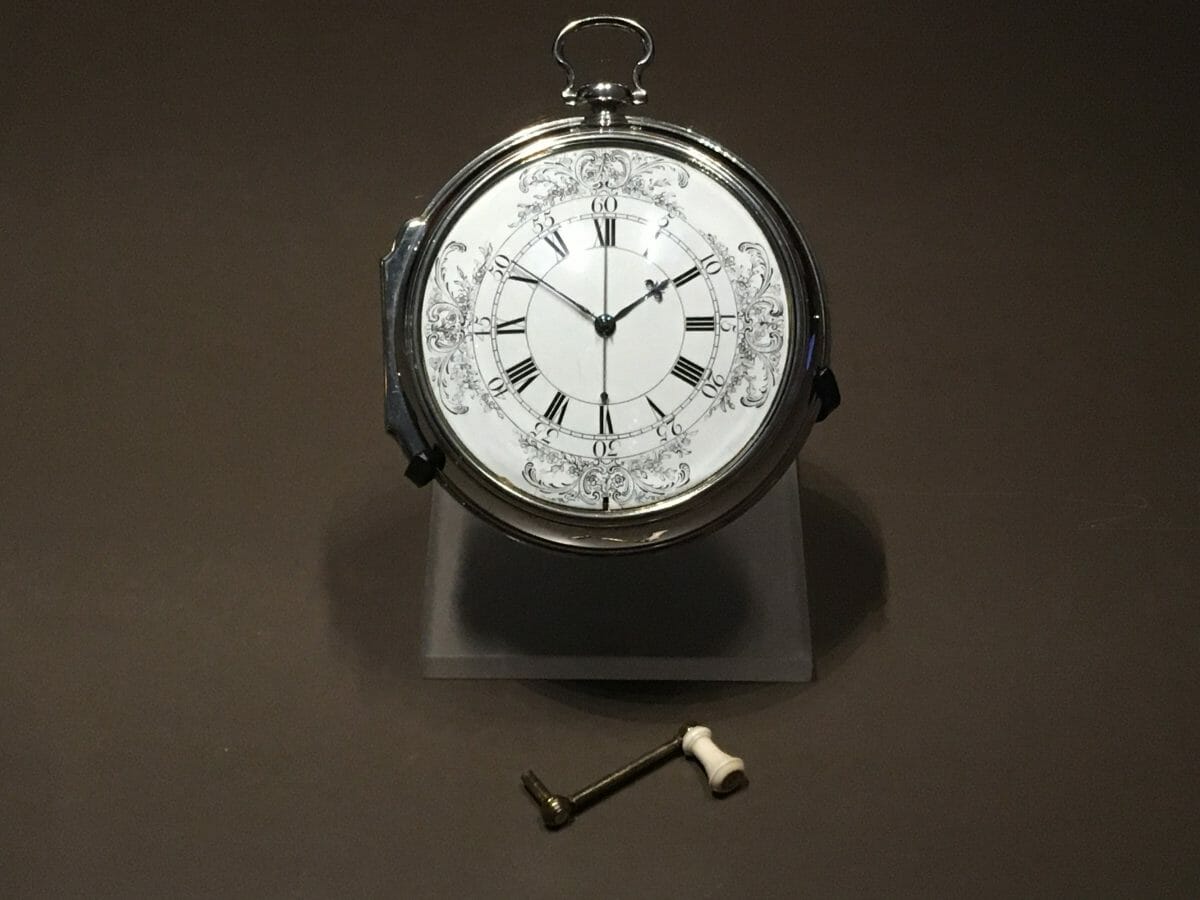 …..Mr. Harrison, miniaturized it and put it in a watch case.  This is somewhere between 4″ and 5″ in diameter I recall.  This guy was quite amazing.  Of course the Brits, welched* on the bet giving him only a fraction of the prize and it wasn’t until after his death that a petition for the full amount was granted.   Read Sobel’s book.  (*I shouldn’t disparage the Welch) 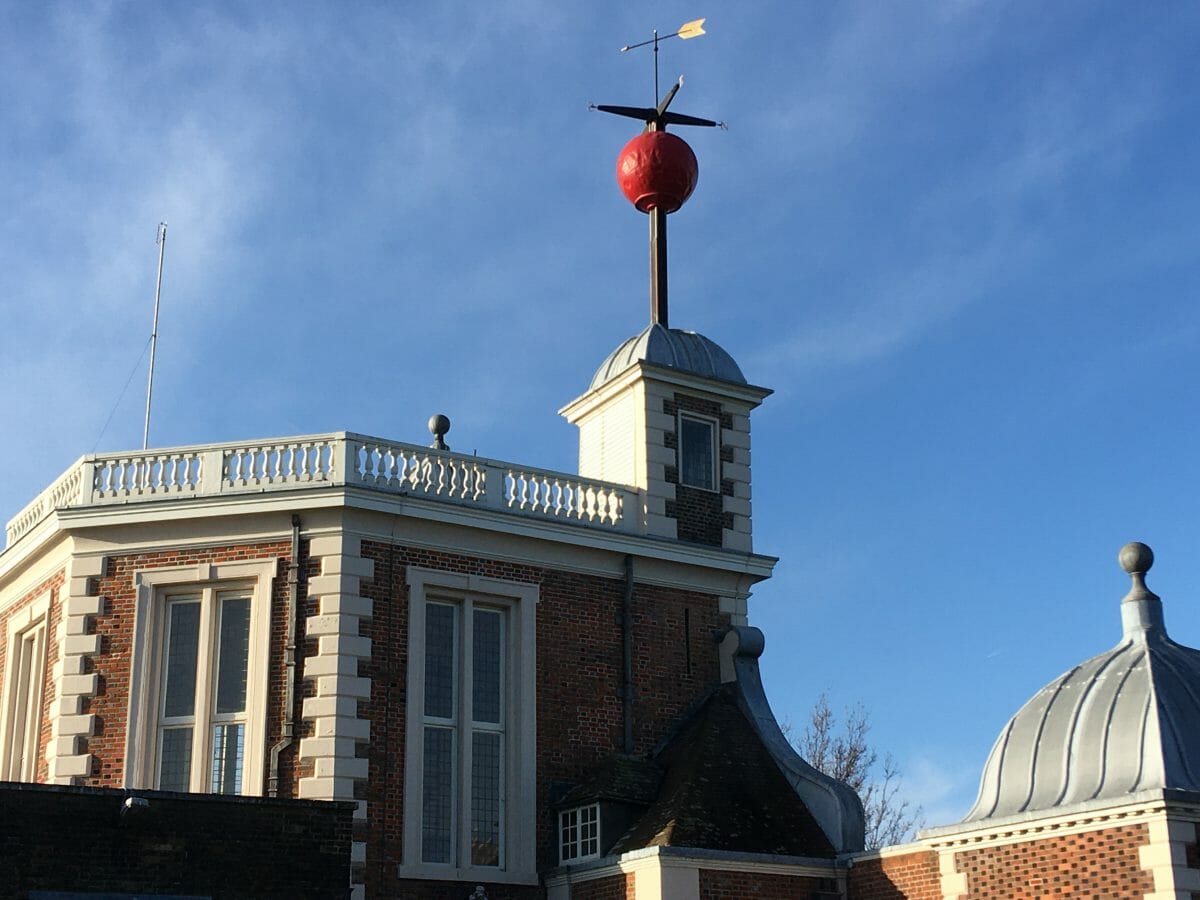 So, once the problem of an accurate clock and hence an accurate longitude was solved (latitude was a simple noon-time observation whenever the sun shone), ships would set their “Harrison chronometers” when they sailed out the Thames.  How did they set their clocks?…..every day at 12:55pm, this red ball would be hoisted up then dropped in a half second or so to mark exactly 1pm.  In this very building, they still house all the earliest clocks right up to the present atomic clock.   Current time is measured by cesium resonant clocks but newer ytterbium-ion clocks have been developed which can run a billion years without losing a second.   Does this figure in the expansion of the universe?  Hmmm. 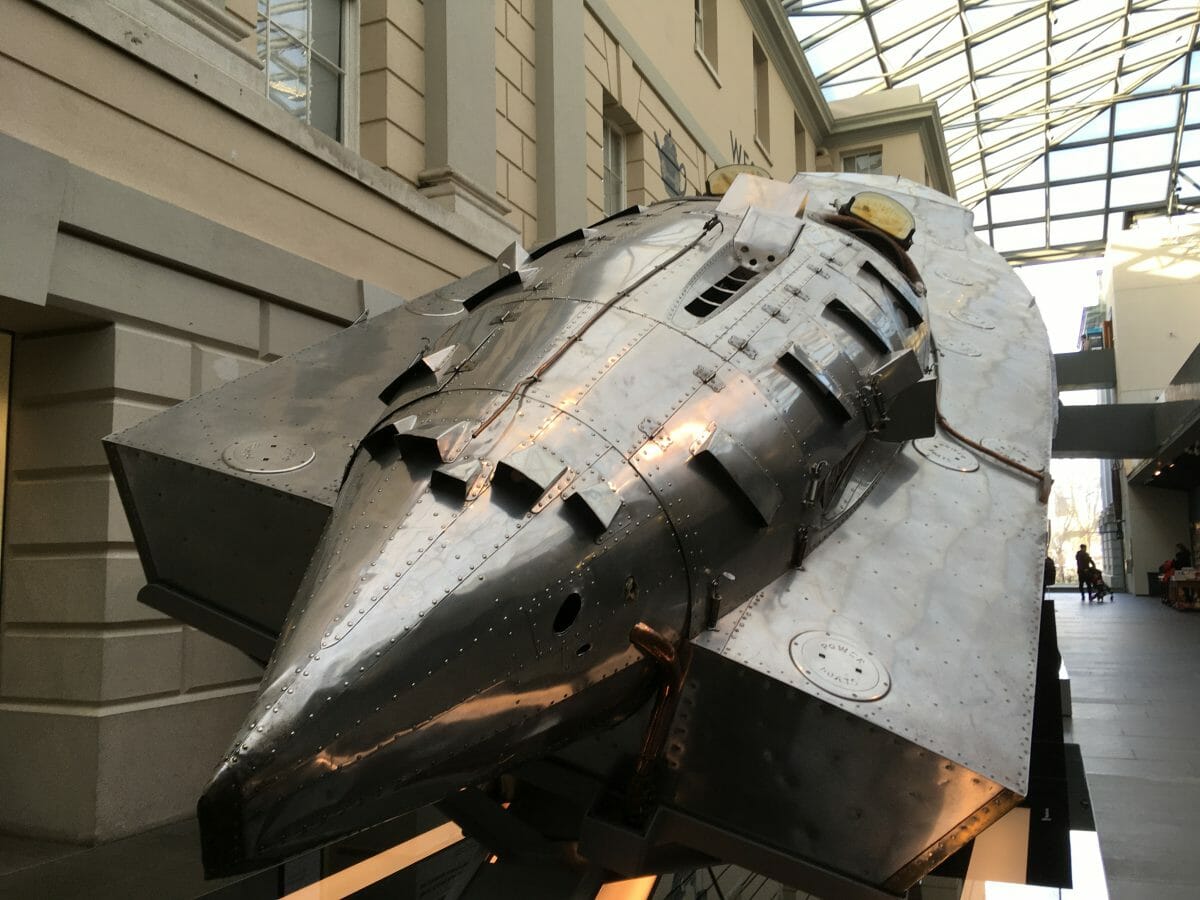 Ever since I spotted this boat, I’ve been trying to figure out a way to steal it (steel it?).  I’m getting rivet envy–It’s got more rivets (they’re actually screws) than my ’48 Airstream.  Perhaps it would be easier to donate the Airstream to exhibit along side?  Move over Buck Rogers. 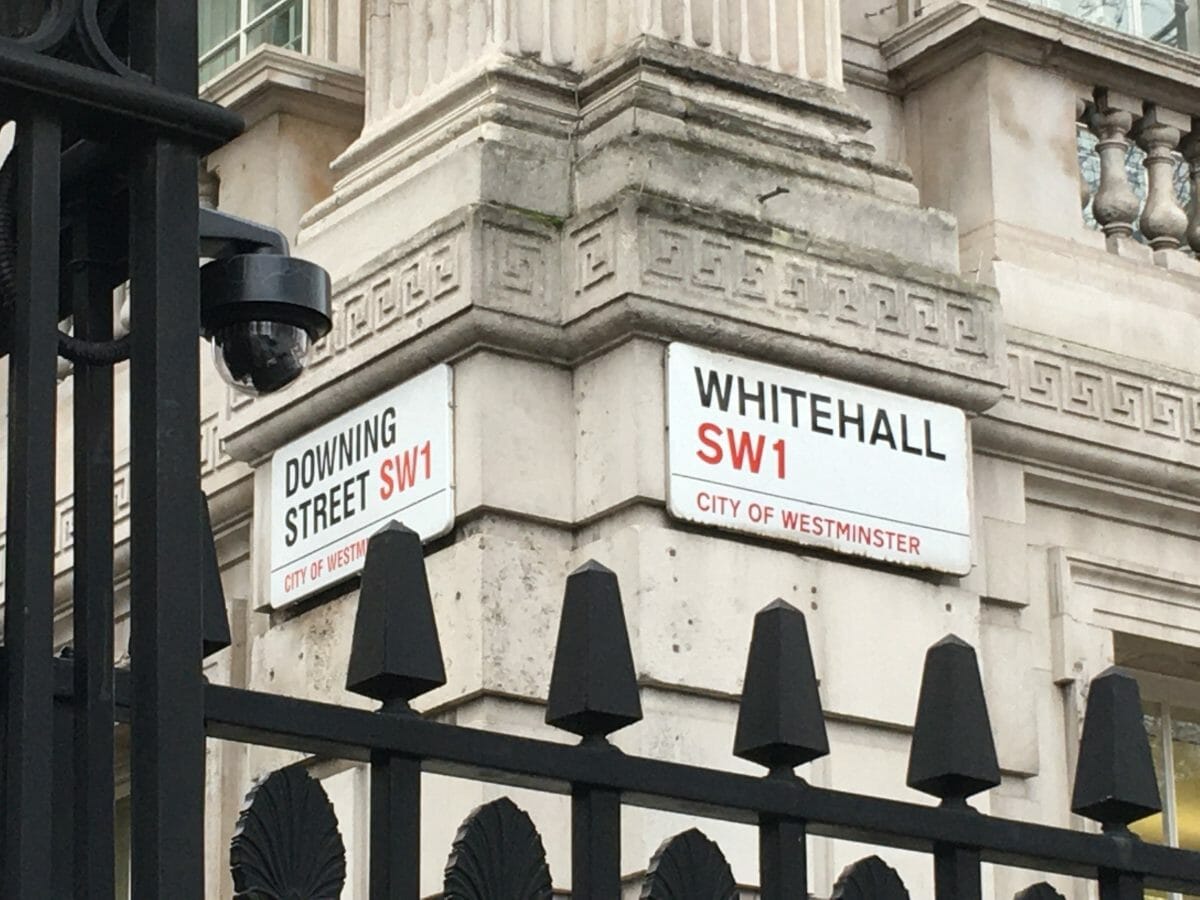 Gotta end with #10 Downing Street, what with all our current US President (who is the laughing stock of everyone I’ve met so far in Europe).  Besides having similar politics, they have the similar barbers. Doug’s Prediction:  When Brexit is finalized, Scotland will go its way, “The Troubles” will start up again in Ireland and the European economy will tank–perhaps the only event that will prop up the US dollar.  (You can quote me later).   Next stop is Norway.