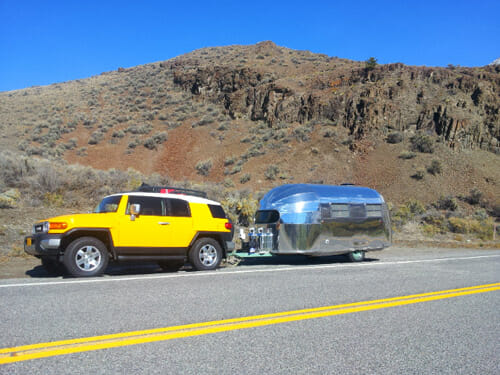 Well, you all know about the 1948 Airstream Tradewind we found in California last year.  We towed it up to Montana and then on to Cody to get a new interior.  It’s a peach–and the third one built.  It’s currently parked in Cody Wyoming where I’m putting in a new “Molesworth” interior.  Who is Molesworth?  Read on….. 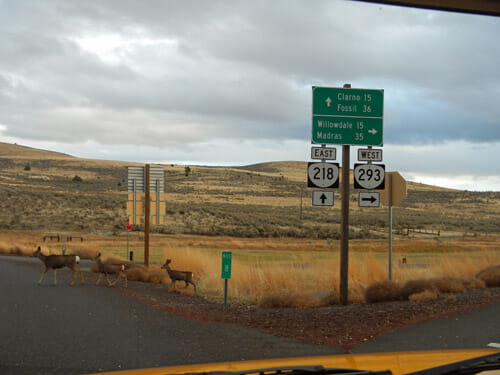 Driving to Cody is always fun.  After disembarking the Alaska Ferry from Seattle, I desperately need a haircut so stopped in a Korean barber shop in Tacoma (next to the clock shop) and there is one chair in a gymnasium sized room heated to a robust 50F.  I ask the Korean woman if she can give me a haircut to which she enthusiastically replies:  “DeRux!”  So after 15 minutes, I come out looking like Kim Jung Un.  The first stop is Portland and later Antelope Oregon where the Bhagwan used to live.  Quite frankly, I’m surprised he picked Antelope but as The New Yorker Magazine said, “Let’s let Bhagwans be Bhagwans.” 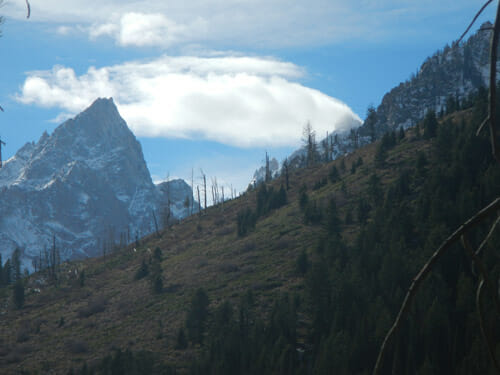 The next stop is Jackson Hole where Martina and I take our usual fall hike–here the wind blows off the summit of the Grand Teton (right) like Mt. Everest.  The North Face of Teewinot doesn’t look that inviting either.  I worked here as a Jenny Lake Ranger for 7 years in the 1970s.  Great years. 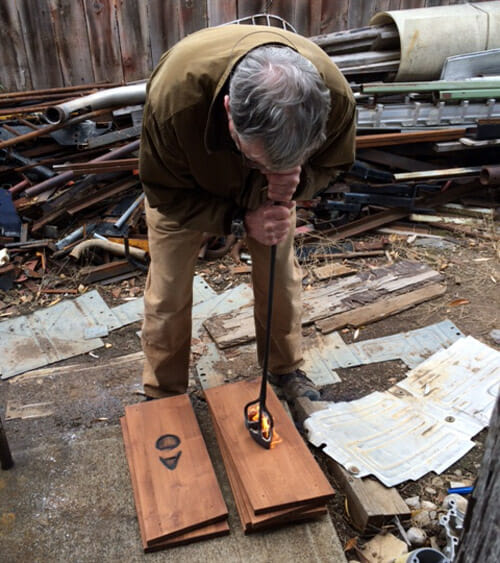 In Jackson, I heat up my uncle’s old branding iron–the A Lazy D–and brand all our new Molesworth chair panels…….. 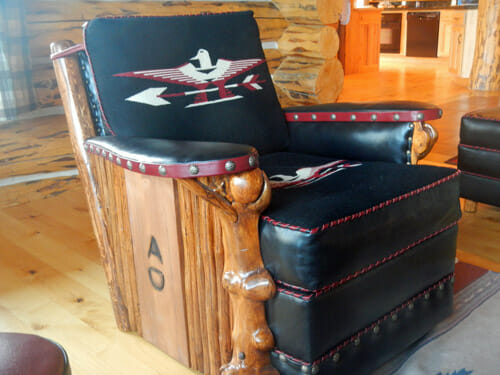 Now doesn’t this look snappy!  Thomas Molesworth founded the Shoshone Furniture Company in Cody, Wyoming in the 1930s and built furniture for lodges of the west.  He was the right man in the right place at the right time.  My great-uncle (David Thomas Abercrombie) sold this furniture at his NYC store–Abercrombie & Fitch.  It can also be found at Camp David and throughout the west.  These reproductions are built by Lester Santos of Santos Furniture in Cody. Lester is a renaissance man who once built harpsichords in New England.  He is a craftsman’s craftsman. 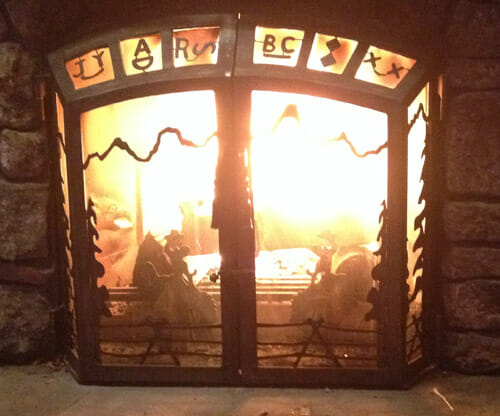 I’ve also included the A Lazy D brand in our fireplace doors among other park dude ranch brands.  Note the buckaroo andirons and buck & rail fence. 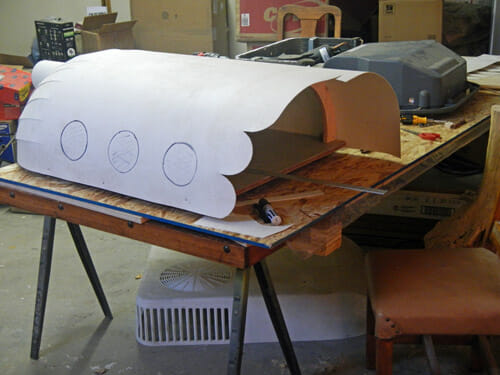 OK, so where we……the trailer is getting a Molesworth interior and I desperately need an air conditioner to cover the global warming issues–and a recent 114F day-time temps in Quartzite Arizona we encountered last year.  But I cannot install a butt-ugly plastic cover (under table) on a 1948 beauty.  So it’s self-fabrication–and here is a retro pattern for an aluminum cover……Buck Rogers! 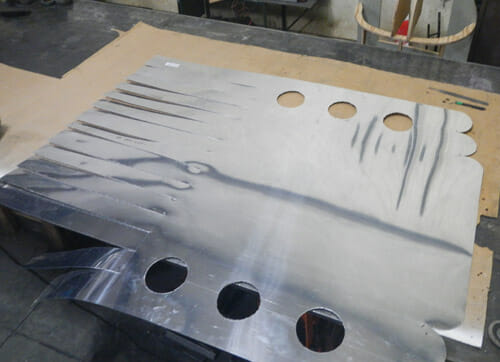 I order a sheet of .025 thick 2024T3 aircraft aluminum and get out the tinsnips.  When rolled up and hauled across the street this looks like a giant aluminum squid which turns many heads in Cody. 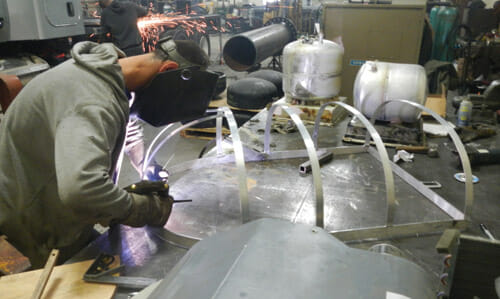 Next step is to build a frame and my welder guy, Daniel is adept at this step.  Cody is a big participant in the fracking oil boom in North Dakota and you can see fabrication of natural gas piping in the background.  Also two split water tanks–the temps went from 67F to -18F in about 5 hours catching everyone off guard. 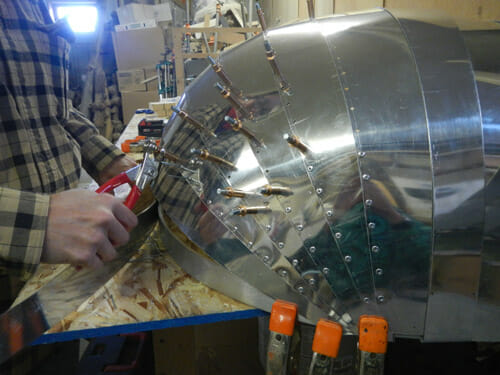 But it didn’t catch Ranger Doug off guard.  I’m busy riveting together this ‘squid’ into a shape reminiscent of a miniature airstream…… 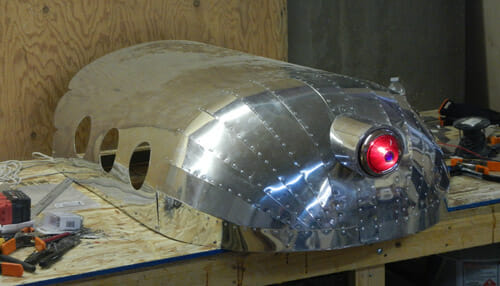 …..complete with a 1948 Pontiac tail-light mounted forwards.  Flash Gordon or what!  Expanded metal will fill in the vents and rear door.  Awesome! 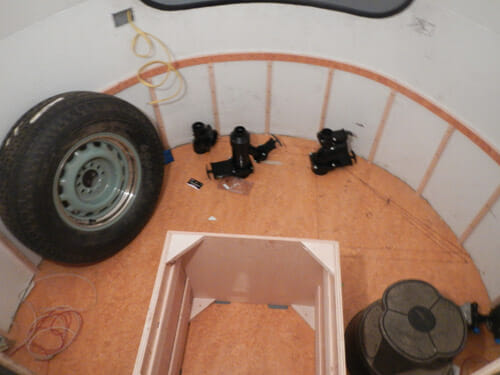 A tour around the trailer is now in order.  Here is the utility area where all the tankage, spare tire, pumps, etc. will go.  Over this utility area will be a dedicated near-queen sized bed–no more sliding panels.  In the 1961 Bambi (sold to a Hollywood movie guy) things were so tight I had to step outside just to change my mind. 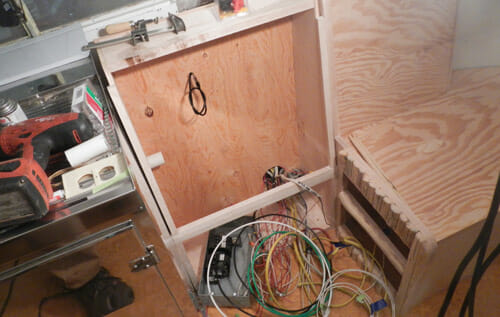 All the electrical will fit in this box with a tilt-down lid.  Stereo, all tank gauges, etc.  Note the beginnings of the Molesworth paneling on the settee to the right. 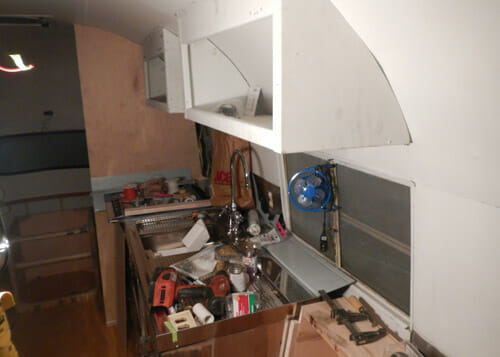 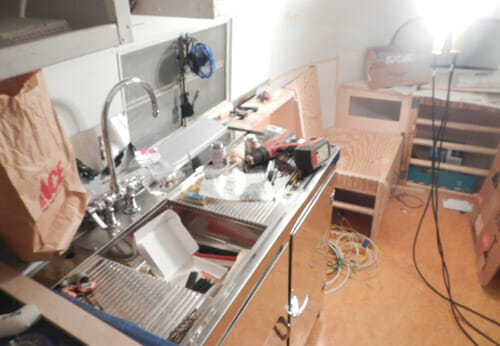 Here’s a view the other way.  Oh, and no refrigerator.  In the Bambi we had one that was never used.  We simply carried a camp cooler with a block of ice–which this stainless has already built in and drained to the gray water tank and ultimately the shower pan.  The tankage is equalized so total fresh water equals the total gray water. 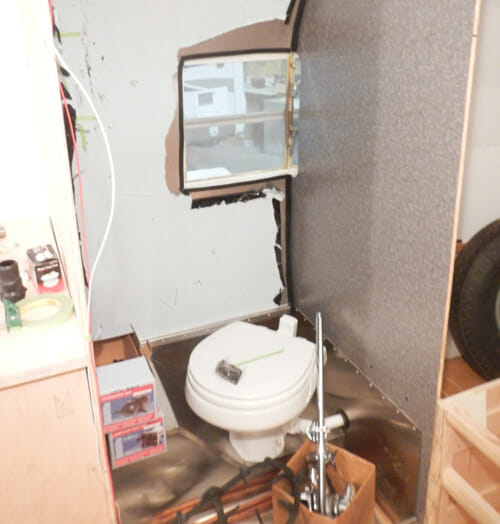 How about blackwater???   A macerating toilet and a 10 gallon holding tank–coupled with the gray water at the exit and all piping stored outside.  This space doubles as a shower (Chicago Faucet fixture in box). 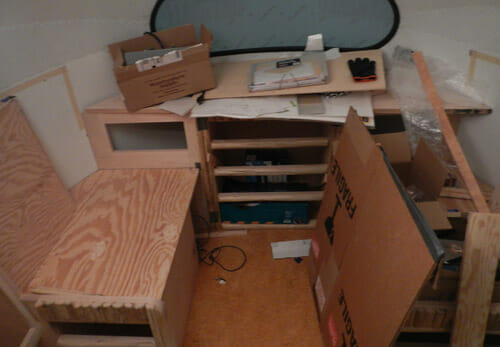 Here’s the settee roughed out.  The table is removable to fit for an emergency bed between the seats.  It also will install outdoors on the trailer with a barbecue for outdoor cooking.   The interior curved areas will be painted like the Sistine Chapel, ala western national park scenes and some Department of the Interior artwork for accents.  Lester will add burl trim, sequoia cones (the NPS symbol), and lots of varnish for the finishing touches.  Don’t forget Chamayo cushions and a little leather fringe here and there…..Then toss in a nice stereo, catalytic heater and wide screen TV and we’re ready for the big Ranger Doug 2016 NPS Centennial Roadtrip.  More to follow!