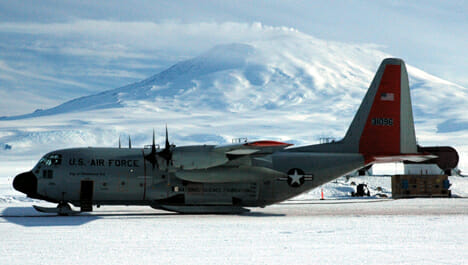 It’s time to go again. The South Pole is still 9300 feet above sea level (physiologically 11,200’)–in other words, hard work. My LC-130 is waiting for me at “Pegasus Field” under the erupting plume of Mt. Erebus. It was my luck to fix up a pilot the day before and he saves me a “front seat” on the 3 hour flight to South Pole. It’s still a boring flight–all white below us including the Pole itself which reports a ceiling at 400 feet. Our pilot (through my headphones) explains to ground control that they cannot land with a “ceiling” however, if it is a “broken ceiling” then they can approach. A “revised” weather reports soon arrives and we dive from 26,000 to Pole in less than 10 minutes. 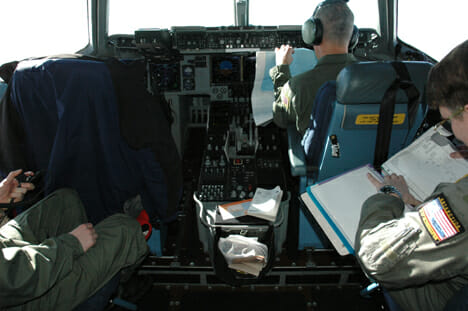 Below is a “clear day” photo taken by the Station Director on a Twin Otter flight the previous day—which happens to be very clear (and cold). The new Amundsen-Scott Station is the big building in front and if you squint hard…… 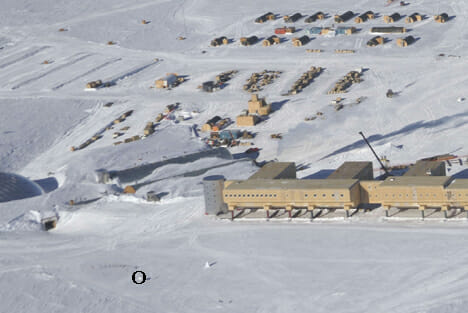 you can see the actual Pole within the “O” at the bottom of the photo. Above and left of this is a semicircular smudge of flags surrounding the “Ceremonial Pole.” (Squint again).  The old Seabee Dome built in the early 1970s is far left. 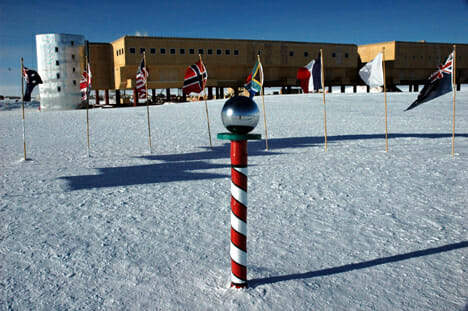 OK, here you are at the South Pole. Note that this is actually a bamboo pole painted red/white that was placed here in the 1950s when Navy returned. The new Amundsen-Scott building beyond “floats” on pilings driven in the snow and can be leveled as the glacial dome drifts. The ceremonial pole is just that–with the actual Geographic Pole about 75 feet toward South America (to the right). 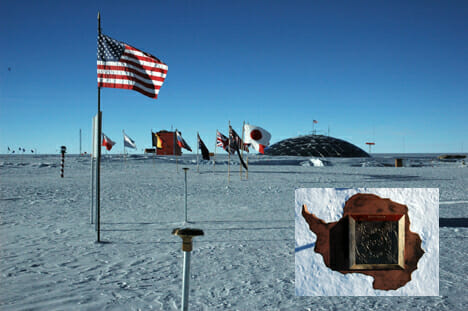 Here is a view of the 2004 pole marker (closest–see November archives) and the 2005 marker directly above (inset). Every year, the marker is redesigned and relocated 30 feet to its true pole position. You can purchase a replica of these markers from my good friend Betty Green Risser at www.geositu.com

The South Pole ice sheet is drifting toward South America (from an elevation of 12,000—“Alpha Dome”) about 30 feet a year; the pole marker is shifted that amount to correlate with the actual axis of the earth. That’s why there is a ceremonial marker because in 100 years the actual pole will lie about 3000 feet away from the Amundsen-Scott Station. Likewise, Amundsen’s tent, erected on his 1911 expedition to the Pole, lies about 3000 feet directly behind your back (above photo). 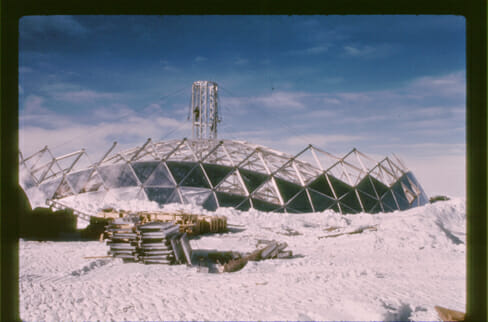 On my flight in to Pole were two Seabee (for CB or Construction Battalion) historians that were sent down to study the feasibility of removing the original “Dome” erected in 1973–actual photo! Today, the dome is about 30 feet under the snow with only about 30 feet protruding above—time to close shop and move into the new A-S Station. This is no small feat as each piece must be dismantled and flown out to Port Hueneme, California (Home of the Seabees—of which I was a proud member in 1965 and 1966). This dome will become an Antarctica Museum soon—be sure to visit. 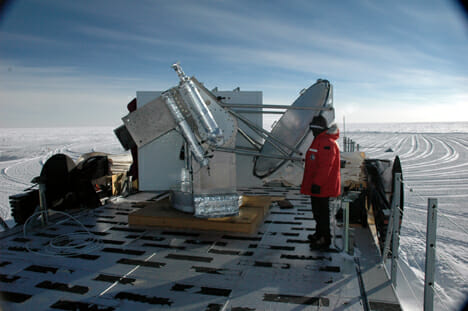 Next is a trip about ¼ mile across the ice runway to one of the telescopes. This scope studies the composition of stars as they form. It’s like a big Wok lined with shiny aluminum that deflects any heat source from the sensitive instruments within. It measures light waves in the “sub-millimeter” range. Note the Bavarian flag flying just to the left of the telescope. Here’s a photo of a similar scope about 100 meters away that studies the “Big Bang.” 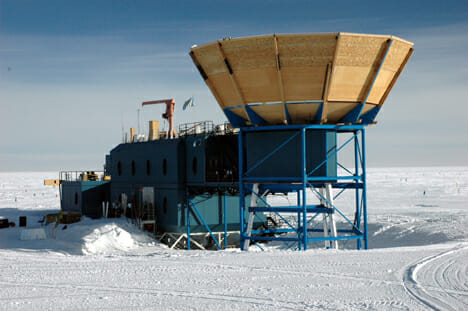 Beneath all this is a scientific lab that looks like this….. 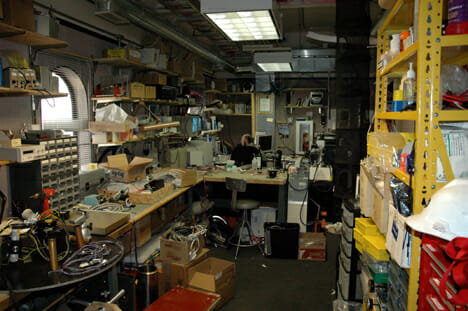 Looks like my closet except there are no dirty socks here. This is where many scientists live for up to six months a year. It’s a cold walk back to A-S Station—now -46F below as the winter is approaching. Time to get out of here—85 construction workers and scientists will remain over the winter. See the “Departure” posting next…….